“At the time, he reportedly had mild COVID-19 symptoms, including fever and congestion, and he was transferred to Walter Reed National Military Medical Center.

“Later, the president’s medical team confirmed he had started a course of remdesivir, an antiviral drug shown to modestly help hospitalized COVID-19 patients.

“Two days later, on 4 October, the team revealed Trump had been given a steroid normally reserved for severe COVID-19 cases, although his physician offered optimism about a quick recovery.”

And on Oct. 5, the president was discharged from the hospital, tweeting the following… 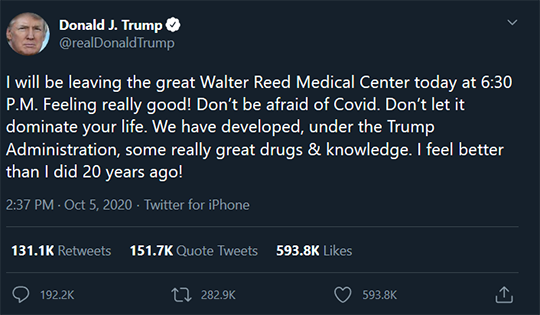 Twenty years?! A probable fast-food detox might have something to do with that…

As for the question that’s overshadowed Trump’s illness, the mainstream media and the election cycle: Will we get a vaccine before the election?

That’s the question The 5’s founding editor Addison Wiggin put to tech stock authority Ray Blanco; specifically, Ray’s view on the attempt to get a vaccine to market by Nov. 3.

“You’ve got Trump on the one end,” Ray says. “First of all, he’s always an extremely optimistic person, at least publicly. So he’s really optimistic we’re going to have a vaccine by the election.

“Which, from his perspective, is an ideal outcome because now you can tell the American people, ‘Hey, we have a solution. See, I got the job done. Reelect me.’

“On the other hand, you have ‘Mr. Caution’ himself, Dr. Fauci, head of the National Institute of Allergy and Infectious Diseases. And he’s saying, ‘Well, we’re not going to have anything until the end of next year.’

“The fact is,” says Ray, “we could have validating data by as early as November.

“Maybe even October,” Ray suggests. “From one company, or perhaps more than one. I mean, it’s possible… You’ve got to go through the FDA review process. Then you have to mass-produce [a vaccine] and distribute it and get it out there.

“Vaccines typically take five years from start to finish,” Ray notes, “and the bar for vaccines on the safety side is particularly high, because presumably a good vaccine is something that almost everybody’s going to take.

“So the bar is quite high,” says Ray. “And it’s really expensive.

“[But] for the FDA to emergency-approve something based on Phase 2 data is not unprecedented.

“If there’s a severe unmet medical need and an underserved patient population, then the FDA will sometimes, if the Phase 2 data are really strong, clear it provisionally for approval,” Ray says.

One would think a global pandemic might move the needle (honestly, no pun intended)…

Next, Addison asks: “Do you think the political or economic urgency to get a vaccine has changed the valuation of [biotech] companies as they go through clinical trials?”

“Yes,” Ray continues, “we’ve seen companies skyrocket hundreds of percent. There’s a hype element at play in the market, which I’m fine with,” he continues. “I love getting ahead of the hype.

“These [biotech] companies — these smaller ones particularly — if they do manage to bring a vaccine to market, you are looking at not just the market value of that vaccine (which might not be all that terrific by the way), but there’s also a lot of goodwill that will come to these companies.

“There may be some validation at work for their entire platform,” Ray says.

So for investors, the question is: “Who will develop and distribute a COVID-19 vaccine first?”

Ray says: “The data are piling up from multiple vaccine developers, and they are really good…

“The next step for all four companies is to enter their respective vaccines into late-stage, pivotal trials,” says Ray. “This will happen over the next few weeks. We could potentially see positive results, and FDA approvals.

“It’s possible that none, some or all of these vaccines pass the efficacy test,” Ray concludes. “The best thing for us — and the world — is if they all do.”

“The averages were pushing higher yesterday afternoon and all was well,” Greg says. “That’s when the tweeting started. Trump basically shut down stimulus talks with a short tweetstorm, claiming that he was finished negotiating with the opposition until he wins reelection.

“The powers that be had been dangling stimulus out there as a potential bullish development, and yanking it away abruptly in the middle of the trading day effectively shoved stocks off a cliff.

“The Nasdaq finished lower by more than 1.5%, and the S&P and Dow weren’t far behind,” says Greg. “But that’s not the end…

“Trump must’ve seen the market’s ugly reaction later last night, so he attempted to repair the damage by challenging Pelosi to deliver piecemeal deals for some bailouts and stimulus checks.

“So here we are,” Greg sighs. Indeed…

“Mortgage rates declined across the board last week — with most falling to record lows — and borrowers responded,” says Joel Kan of the Mortgage Bankers Association.

“Continuing the trend seen in recent months,” Mr. Kan continues, “the purchase market is growing at a strong clip, with activity last week up 21% from a year ago.

“The average loan size increased again to a new record at $371,500, as activity in the higher loan size categories continues to lead growth.”

In the homebuying market? Keep reading…

Most recently, “researchers [at the Allen Institute] revealed a piece of software that could actually draw pictures based on the text of a caption.

“While computers have been able to identify the content of pictures for a while,” James notes, “getting them to draw was a bit harder.”

The process was not dissimilar to “teaching a child to ‘read’ with a book they’ve had read to them a thousand times,” says James. “Eventually, they’re able to read the book flawlessly because they’ve basically memorized all the words.

“Just like children, computers are now going through a similar development process, where they’re demonstrating the ability to understand the meaning of words,” James says.

“But this is just the start,” he says. “Over time, we can expect AI software to improve dramatically, until it’s capable of generating hyper-realistic images. Eventually, we could see tools like this used for tasks such as generating imagery for video games and movies.

“From an investment perspective,” James says, “the best opportunity is probably to invest in the tools that make AI possible. These include the big chip manufacturers that provide the hardware for experimental projects; the semiconductors that make all this possible will stand to gain.

“To continue the metaphor,” says James, “AI is in preschool or kindergarten. So look at the companies selling the school supplies.”

This is so on-brand for 2020: “Buffalo Bill’s house from the iconic thriller Silence of the Lambs is up for grabs,” the New York Post says. 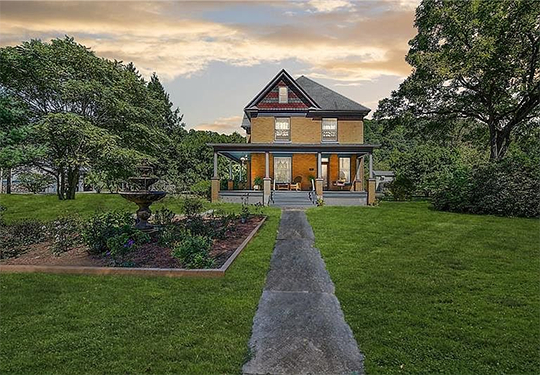 “The four-bedroom home with a sprawling front porch sits on 1.7 acres in Perryopolis, Pennsylvania, along the train tracks featured in the opening shot of the Buffalo Bill scene.”

The real estate listing says: “Most of America has seen this house, but now you have a chance to buy it.”

Rest assured, there’s no giant hole in the basement — that part of the movie was filmed on a soundstage — but the real estate agent admits the cellar is “actually kind of creepy.”

The listing concludes (and this is funny): “With everything the home offers AND ties to the classic horror film… this iconic property would make for an amazing Airbnb!”

Code for: “You don’t actually want to live here, do you?”

“Don’t these politicians try to learn from recent history or from neighboring states?” asks a reader in response to New Jersey’s new millionaire tax.

“Maryland’s experience with passing a tax on people earning over a million dollars is a recent case study. What was the aftermath? Businesses fled and most of the millionaires left (mostly to Loudoun County, Virginia). The tax base collapsed and the state fell short in tax revenue for years and never recovered till after inept governor O’Malley left office.

“I’ve noticed over the past two years an unusually high number of high-six- to low-seven-figure properties listed for sale in the New Jersey area.”

The 5: Did you really put the words try and learn in the same sentence with politicians?

We’ll be back tomorrow…