“The bottom that you’re seeing in gold is like a perfect Miami beach bottom,” says Frank Holmes. Heh… how’s that for a hook?

Frank Holmes is a longtime friend of The 5 and manager of the U.S. Global family of mutual funds, specializing in precious metals and natural resources. And just scant hours ago, Mr. Holmes rendered his opinion at Kitco News on gold’s recent price action.

Kitco notes: “Gold has trended down from its August highs and has not broken… above $2,000 an ounce.” However, according to Holmes, “Physical gold demand has historically picked up following the summer.” 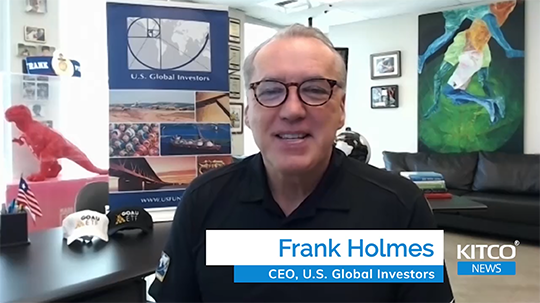 What’s red, blue and gold all over?

When asked if the outcome of the presidential election will sway gold’s price, Mr. Holmes answered: “Some are betting on blue, some betting on red and I’m betting on gold.”

Mr. Holmes — who’s gone on record with his gold $4,000 prediction — certainly has mastered the sound bite…

“Gold is in hot demand as an investment,” says a BBC article, “But it's also a finite resource, and there will… come a [time] when there is none left to be mined.

“Experts talk about the concept of peak gold — when we have mined the most we ever can in any one year. Some believe we may have already reached that point. 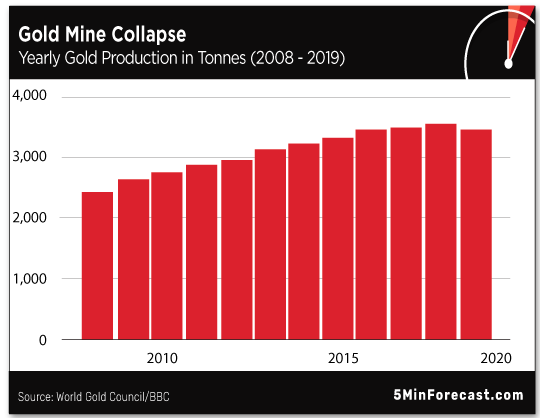 Hannah Brandstaetter of the World Gold Council says: "While the growth in mine supply may slow or decline slightly in the coming years, as existing reserves are exhausted, and new major discoveries become increasingly rare, suggesting that production has peaked may still be a little premature.”

So best estimate: How much gold is left to be mined?

“Mining companies estimate the volume of gold that remains in the ground in two ways,” BBC says. Resources vs. reserves…

According to the CIM Definition Standards: “A mineral resource is a concentration or occurrence of natural… organic material in or on the Earth’s crust in such form and quantity and of such a grade or quality that it has reasonable prospects for economic extraction.”

While a gold reserve — put simply — is “gold that is economic to mine at the current gold price,” the BBC says. “The volume of gold reserves can be calculated more accurately than resources, although this is still not an easy task.

“The below-ground stock of gold reserves is currently estimated to be around 50,000 tonnes, according to the U.S. Geological Survey,” the article continues. “To put that in perspective, around 190,000 tonnes of gold have been mined in total, although estimates do vary.

“Based on these rough figures, there is about 20% still to be mined,” says BBC. “But this is a moving target.”

“Although gold prices hit a record high in August,” BBC notes, “this doesn't automatically translate into a rise in gold mining activity.

“Large-scale mining is extremely capital-intensive, employing lots of machinery and expertise to mine vast areas on and below the surface.”

Ross Norman of MetalsDaily.com says: "Mining is getting harder in the sense that many of the large, low-cost mines, and older ones such as in South Africa, are nearing exhaustion. Chinese gold mines, on the other hand, are much smaller, [but] have higher costs."

All told: “Changes in gold mine production often lag changes in the gold price very significantly.”

Ms. Brandstaetter adds: "Given the scale of operations involved, it takes time to alter mine plans in response to changes in external factors, such as the price of gold.”

And here’s a minor mining snag: “Record prices have happened during COVID-19 restrictions, making it harder to mine, as sites were closed or partially shut down to curb the spread of the virus,” BBC says.

Which is ironic, considering: “Price rises have actually been driven by the pandemic as investors view gold as a safer asset in times of economic uncertainty.”

All told, gold’s scarcity coupled with swelling demand — oh, and a pandemic in the background — seems like a recipe for a Midas metal rebound.

[Ed. note: Whether gold’s up, down or sideways… You’re right, left or center… No matter. The 5 hasn’t budged on our belief that some percentage of your portfolio — Jim Rickards recommends 10% — be allocated to gold and other precious metals.

And the easiest way we know to buy, hold and store physical gold, silver and platinum is with Hard Assets Alliance. You can even choose an IRA option if that matches your retirement goals.

Full disclosure: Our firm owns a stake of HAA, so you can assume we get a cut of any fees… which are among some of the lowest in the biz, by the way.]

“Stimulus talks are back on and the market continues to power higher following that little Trump-tweet hiccup we experienced earlier this week,” says market analyst Greg Guenthner.

“Today, the biotechs are getting a boost thanks to the president name dropping Eli Lilly and Co. (LLY) and Regeneron Pharmaceuticals Inc. (REGN) yesterday.”

Greg says: “I think gold and silver see more downside before they recover. I’m not interested in the miners until they set back up again…”

Since it’s Thursday, we feature this miserable chart, showing unemployment claims going all the way back to 1971… 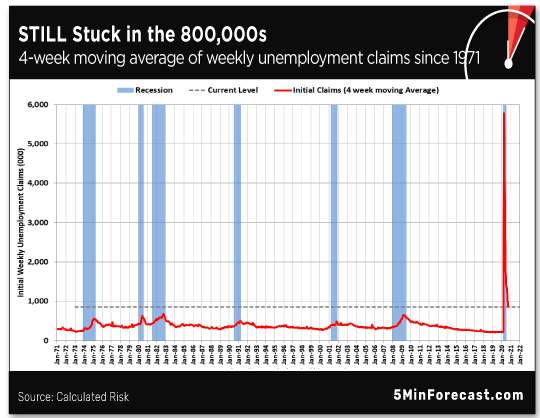 According to the wonks at the Labor Department, there were 840,000 initial unemployment claims filed for the week ending Oct. 3 — down 9,000 from the week before.

*Sigh* Who knew we’d look back on the Great Recession as the good ol’ days?

“As we get closer to the election and potential shift in power,” says wealth and income expert Zach Scheidt, “investors are focused on generating reliable income.”

That’s doubly true for investors who are already retired… or planning for retirement. (Heh, so pretty much all of us.) And like most everything else in 2020, conventional wisdom on retirement planning has seen a shift.

“A couple of years ago,” Zach says, “a financial planning company came out with a marketing gimmick showing people walking around town with a number hanging over their heads. This number was supposed to signify the money that each person needed to comfortably retire.

“I hate this way of thinking about retirement,” says Zach. “It’s way too simplistic, and a single number can’t realistically cover what you need for retirement.

“There’s no way to tell how long you’re going to live, how much you’ll need to cover your expenses or what other variables factor into your unique situation.”

Zach says: “While I don’t think there’s an exact number you need to save for retirement, I do think there’s another number that can be important as you plan your golden years…

“That number is your income — and it can come from many places,” he continues. “As a retiree, you’ll likely receive a regular payment from the Social Security Administration. You may also cash a regular check from a previous employer or pension plan.

“And if you’ve put savings aside, you can use that cash to generate extra income.

“In today’s political and economic climate, that extra income is more important than ever,” says Zach. “After all, with interest rates at historic lows, high unemployment and a logjam on any stimulus that might come out of Washington, the need for income is high.

“Believe it or not, the law [of supply and demand] applies to income as well,” Zach says. “Around the world, investors are increasingly willing to pay more for the stocks that generate this extra income.

“What better way than to invest in solid companies that pay reliable dividends!” And an added bonus? “During stressful times for investors, dividend stocks hold up better than other stocks.”

“So make sure you’ve got a healthy portion of your retirement invested in high-quality dividend stocks.”

Heh… some presidential memorabilia that kills two birds with one stone… 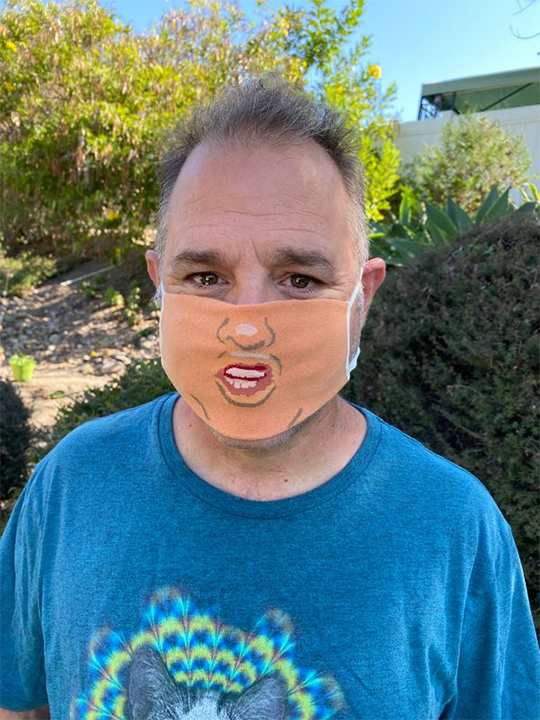 Courtesy: boosocki.com
“This is yuge!”

This face mask pulls double duty — it’s a weird nod to both a president and a profoundly weird year.

About the mask, according to the website boosocki.com: “After enjoying our morning cofveve, we got off the phone with Fauci and he told us this Trump mask would be yuge.”

P.S. Everyday investors like you are buying gold at a record pace, and joining today’s gold rush is easier than ever with Hard Assets Alliance. Buy, hold and sell physical gold 24/7 from the comfort of your home.

Note: Agora Financial is pleased to be a stakeholder in Hard Assets Alliance; we think HAA is one of the best ways we know for everyday investors to balance their portfolios with precious metals. Assume we will get a share of the fees… which are among the lowest in the business.