[Dave’s note: Before I hand off today’s episode of The 5 to Emily, I want to remind you only three days remain before The Profit Wire, our most popular trading service since June, will be closed to new subscribers.

This isn’t a case of the offer being shut down for a few days, only to reopen again. This is it. After Monday, we won’t reopen access for several weeks — maybe not until 2021. That means you won’t have access to a trading service that’s amassed average performance the last six months of 43.7% gains in only 46 days’ holding time. Here’s your final invitation The link goes dead Monday… and this time, it will never come back.]

“I need to come clean about something,” says income specialist Zach Scheidt, “I’ve been misleading you.

“It’s not just me, either,” he continues. “Just about every other source of financial information out there — news channels… websites… probably even your broker’s trading platform — has too.

“The good news is that it’s not malicious.

“In fact, your stocks are generating far more income than you’ve been led to believe,” Zach says.

“As you probably know, a stock’s yield is how much it pays out compared with how much the stock costs,” Zach notes. “For example, if a stock costs $50 and pays shareholders $1 a year, it has a yield of 2%.

“Or put another way, a shareholder will earn an annual return of 2% on their investment.

“The thing to keep in mind,” Zach says, “is that the quoted yield is just a snapshot in time.

“[The quoted yield] is based on the stock’s current price and its current payout schedule.

“Every time its price changes, the current yield changes.”

Another consideration: “Companies can choose to change their dividend payouts at any time,” says Zach.

“Let’s say the company announces its next dividend will be 30 cents a share, up from the 25 cents it usually pays.

“Now the financial data sites have a choice to make,” Zach says. “They can add up what the company paid over the past year — known as the ‘trailing 12-months’ (TTM).

“Or they can assume that 30 cents will remain in effect over the next year, so they’ll multiply the new payout by four.

“In this example, then, the dividend will be calculated using $1.20 a year,” he says. “The result is called the forward dividend yield.

“Either way, this information is really only useful to people who are looking to buy the stock,” Zach says. “Unfortunately, it can also give current shareholders the wrong idea…

“Consider the current numbers for PG,” he says. Say “shares closed yesterday at $137.70. And in July it paid out $0.79… meaning shareholders can reasonably expect to earn $3.16 a year.

“However, let’s say you bought PG shares when I first recommended them,” Zach says. “You would have paid about $73.22 for each [share].

“That means you’re enjoying a much better yield than what’s reflected in the current numbers.

“Based on that price and PG’s current dividend rate, you’re actually set to earn 4.3% a year,” he says. “Now we’re talking!

“Whenever you bring up a quote on one of your holdings,” Zach says, “the yield you see is not the yield you’re actually getting.”

For Zach’s readers, he says: “We only pick stocks that offer the right mixture of capital protection… growth… and yield.

“And while that combination may cause websites (and me) to report lower current yields,” he concludes, “you can rest assured that your actual yield is better than what the average investor is seeing!”

The big economic number of the day is the “flash PMI” — a snapshot of the economy’s performance so far in October.

Numbers above 50 indicate growth, and the overall PMI comes in at 55.5. Manufacturing is down a hair from September to 53.3 while the Services PMI is decidedly up, 56 versus 54.6 last month.

"Slower expansions in new orders were seen among manufacturers and service providers,” says Chris Williamson of IHS Markit, “with some firms stating that the ongoing impact of the coronavirus disease 2019 (COVID-19) pandemic had weighed on demand."

All signs pointing to a prolonged recovery…

Silver’s down just 3 cents to $24.67, but there’s a lotta buzz about a silver story that’s circulating: “Citi, which has a well-connected resources research team,” says an article at Forbes, “has put its neck on the silver block in an advisory note with a tip that the price of the metal will rise to $40 an ounce over the next 12 months.

“[Citi] argues that there is a technical case for silver doubling to $50 per ounce, and potentially rising fourfold to $100 per ounce,” Forbes says.

“Citi’s case for silver is based on growing demand from investors who see silver as a cheap entry point into the world of precious metals dominated by gold, with a bonus of strong industrial demand.”

Forbes notes: “Investors with memories that go back to 1980 will be wary of such optimistic forecasts because of the mess made of the silver market by three Texan oilmen, Nelson Bunker Hunt, Lamar Hunt and William Herbert Hunt, who concocted a scheme to ‘corner’ the silver market.”

A “scheme” that flopped spectacularly…

“Citi is confident that’s not the case,” the article concludes, “describing the outlook for silver as ‘a mini rerun of the 2009–2011 bull market,’ a time when silver rose from $11 per ounce to $48 per ounce before retreating.”

“By the end of the 2020s, automation robots will be profoundly more nimble, intuitive and reliable,” says editor Bob Williams at Future Wealth, “and they’ll have seized an enormous share of the human workforce.”

*Gulp* A message that’s scary for many Americans… right?

“Most folks aren’t intimidated by this proposition,” Bob asserts. “In fact, a recent poll surveying 1,500 workers across the United States found that almost three-fourths (72.53%) of people believe they would be ‘even more effective in their job if they worked with automation technologies.’ 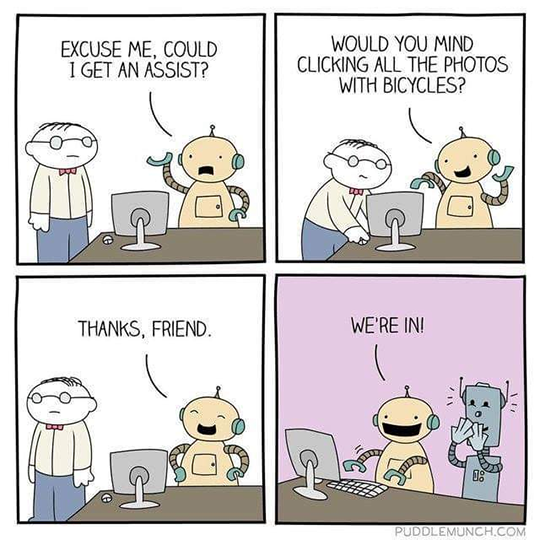 Heh… something robots CAN’T do

Bob continues: “A newer poll conducted by Oracle — released two weeks ago — goes even further in describing humans’ willingness to interact with robots.

“Oracle’s poll addresses COVID-19 and its damaging effect on workplace stress,” he says. “When asked about the prospect of robots conducting mental health consults, 68% of people would prefer to talk with a robot rather than a manager about workplace anxiety, and 80% of people would consider a robot counselor.”

Bob says: “Not only did Oracle’s poll shock me, but the Robot Nation I envision existing in 2029 — a place where robots perform 80% of menial jobs — now looks like it could happen much earlier than I originally thought, considering how eager humans are to collaborate with robots.”

Bob’s takeaway? “These… findings [have] influenced my profit outlook on the robotics industry,” he says, “causing me to bump it higher by a few basis points.”

“I just wanted to comment on the increasing decriminalization of psychedelics,” a reader writes, responding to The 5, “notably psilocybin (aka magic mushrooms).

“I suffer from severe drug-resistant major depressive disorder, and have all my life. (At 5 years old, I told my mother I wanted to kill myself… Thankfully, I have been very close but never attempted to.)

“For all those who have never experienced this kind of depression, imagine how you felt when you lost someone very close to you, or any time when you were in dire despair. Then imagine feeling that way virtually all the time, regardless of what’s actually going on in your life. That is/WAS my world.

“There are generally two types/causes of depression: physical/neurological (neurotransmitter imbalance or other physical cause) and situational (losing a loved one, getting dumped by your girlfriend, etc.). Psychotherapy and cognitive behavioral therapy — positive thinking strategies, meditation, etc. — are all helpful for situational depression but not very helpful in many cases for neurological/physical depression. (It's about as helpful as someone breaking a leg and being told ‘it's all in your head’ and to just walk it off.)

“I have tried so many treatments… psychotherapy, SSRIs and more — all with limited or no effect (except for the horrible side effects). I have quite literally spent tens of thousands of dollars over the years on any and all treatments.

“Most recently, I tried ketamine infusions; however, the $3,500 price tag for six sessions (not covered by insurance) was too expensive to continue and unfortunately not effective for me outside of the infusion session itself. I’ve also tried taking tianeptine, which definitely helps but is similar to opiates, so I wanted something else.

“Enter psilocybin. It is illegal here in LA, but I found a Canadian supplier who’s landed on a creative solution for sending outside of Canada. I have been microdosing for nearly a month now, and I feel ‘normal’ for the first time in my life.

“I implore you to share this with your readers. Anyone reading this who suffers from severe depression, please be open-minded and consider trying it.

“Microdosing is taking a very small dose that does not have any noticeable effects whatsoever other than improving your mood, perceptions and perhaps creativity. Used in this way, it is by far the safest ‘drug’ out there; the harm potential is laughably low.

“The medical potential of psychedelics is unfathomable, and as a result presents an epic financial opportunity. CBD/marijuana's potential is NOTHING compared with what's coming with psychedelics including psilocybin and DMT (active psychedelic ingredient in ayahuasca).

“And I have to say, legalizing psilocybin might save far more lives than any measures taken against COVID-19. The shutdowns are mere political theater, doing FAR MORE overall mental health injury than the virus itself.

“Try psilocybin and reclaim your life (please consider the legal implications for yourself to determine if the benefits outweigh the costs; neither myself nor The 5 would advocate breaking the law).

“Thank you for the great content you provide each day.”

The 5: Thank you, reader, for sharing your personal experience with major depression and the treatment that’s working for you.

As for the pandemic’s effect on mental health in the U.S. — according to a CDC survey in late June — almost 41% of respondents “reported an adverse mental or behavioral health condition”… with nearly 11% saying they’d “seriously considered suicide in the preceding 30 days.”

A mental health crisis is clearly an epidemic in the making that deserves serious attention. The same goes for alternative treatments, including the use of psychedelics. And Ray Blanco and his team will continue to research these critical breakthroughs.

Stay well, readers, and have a good weekend.

P.S. Once this link goes dead on Monday, that’s it…

Because we’re up against a membership cap… and we also suspect we’re about to feel the heat from powerful people who’d just as soon you not have access to the lucrative trades recommended by this service. (Click here to see why.)

We’re talking about average performance over the last six months of 43.7% gains in only 46 days’ holding time. (And that includes the handful of losing trades.)

After Monday, we won’t offer this service to new subscribers for several weeks, and maybe not until 2021. Last chance here — come and get it.