The Next Gold Rally (Three Catalysts)

The largest Chinese Panda coin ever produced has a price tag over $300,000… 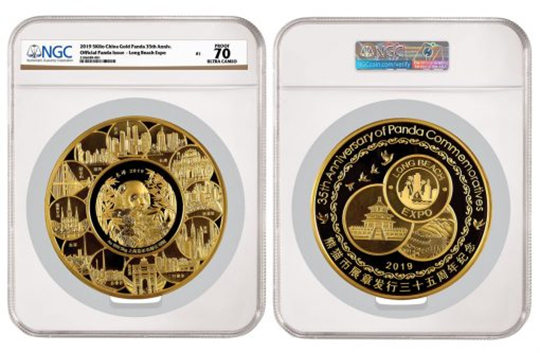 To commemorate the 35th anniversary of the Show Panda series, five gigantic coins were struck for the illustrious Long Beach Expo 2019.

Just how gigantic? Each coin has a six-inch diameter and weighs about 11 pounds. Looked at another way, one of these Panda coins contains the gold equal to — more or less — 160 1-ounce American Eagles.

Purchased all together, the five coins would set you back more than $1.5 million.

While gold’s once again trading under $1,900 today, Jim Rickards expects that price to accelerate. Prodigiously…

“Our long-term forecast for gold prices of $15,000 per ounce or higher still prevails,” Jim says. “This will happen in stages between now and 2026 with some volatility and drawdowns along the way.

“Still, investors want to know what gold is doing in the short run,” he says, “even if they have confidence that it’s a good long-run play. That’s where our factor analysis comes in.

“The key to forecasting gold prices is to identify the factors and understand the direction they are pointing,” he continues. “Right now is one of those occasions where all factors are pointing up.

“Gold is set to rally between now and the end of the year,” Jim forecasts. “Let’s look at the three leading individual factors pointing to a rally in gold…”

Fundamental supply and demand: “The global supply of gold from new mining output has been nearly constant at around 3,200 metric tonnes per year for the past five years. 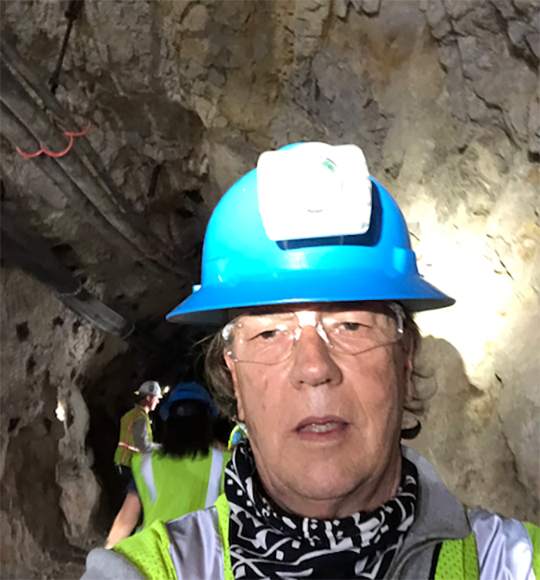 Jim Rickards touring a gold mine in Provo, Utah, 700 feet underground
[Yes, he had an oxygen kit…]

“Buyers are not limited to new output but can buy from existing aboveground stocks,” he continues. “The problem is that gold ownership has migrated to the ‘strong hands’ who want to hold for future appreciation and are not inclined to sell.

“This combination of weak output, strong hands and rising demand is a recipe for higher prices.”

Dwindling confidence in paper money: “The Federal Reserve has printed almost $4 trillion of new money in the past six months,” Jim says. “Central banks and parliaments around the world have done likewise.”

The whirring money printer hasn’t prompted immediate inflation. “Inflationary expectations have been muted due to the pandemic,” says Jim. “Investors have expressed a preference for savings over consumption and money velocity has continued its 22-year decline.

“Still, this liquidity preference is temporary,” he continues. “Individuals are looking ahead and can see that inflation is the only way out of excessive debt.

“The move toward gold is simultaneously a vote of no confidence in paper money and a hedge against future inflation,” Jim says. “This trend will continue.”

“The third great bull market began in 2015 and is still underway,” says Jim. “Gains so far in the new bull market have been about 100% in five years.”

Assuming “a simple average of the first two bull markets would produce expected gains of 1,400% in 10 and a half years.

“In fact, the rally is not constrained by the average and could easily exceed the record bull market of the 1970s.

“In addition to these three long-term factors,” says Jim, “short-term factors will come into play in the next month that will amplify the effect” on gold.

“Among these is the impact of the U.S. presidential election on Nov. 3.” Oh, yeah… that.

A Trump victory? “Expect additional deficit spending along the lines we have already seen. The Fed will have to monetize this debt to keep interest rates from rising. That debt monetization will increase inflationary expectations, which drives the dollar price of gold higher.”

Should Biden unseat the incumbent: “Not only will there be more stimulus-style spending,” says Jim, “but there will be enormous pressure to enact the Democratic Party platform that includes guaranteed basic income, free health care, free tuition, free child care, open borders and the Green New Deal.”

All that free requires trillions in government spending; accordingly, Jim says: “The inflation signal will be even stronger under Biden than Trump and gold prices will rise predictably.

“Finally,” he says, “a disputed outcome in which the Electoral College is a 269-269 tie, or in which results are not final because of disputes over mail-in ballots, will certainly spark a rally in gold as a safe haven in tumultuous times.

“Regardless which candidate wins,” Jim asserts, “gold will also win.”

[Ed. note: Jim recommends every single investor put 10% of their net worth into gold…

Although he’s not backing down from his recommendation, Jim’s urging readers to NOT buy another ounce of gold until you read this message.

Because a rare window in the gold market has just opened up… Giving you the chance to grow much richer… much faster.

In fact, these investments moved 21 times HIGHER on average than the price of gold itself during the last “gold window.”

But there’s no time to waste… this window won’t stay open forever.]

“The main story on CNBC is still blaming the pullback on rising COVID cases,” he says. That’s so last seven months… “A more likely story is that buyers are a little reluctant to step up to the plate this close to the election.

“Also, notice how no one is really talking about earnings this morning,” Greg says. “Microsoft was our Big Tech name to report last night… and shares are lower on weak guidance.”

Additionally, “FANG names are all getting hit, and it’s hard for the averages to stay afloat with the big dogs dragging us lower,” Now we need to see if the market stabilizes. No eager buyers showing up yet.

“I don’t think anyone is paying attention since averages are down so much,” he concludes.

Which brings us to the market today…

All three of the major indexes have lost about 3%… with the tech-heavy Nasdaq hit hardest percentagewise.

Commodities aren’t faring any better. Crude’s crashed about 6%, down to $37.20 for a barrel of West Texas Intermediate.

Per the choppy market today, Greg gets the last word: “Now we need to see if the market stabilizes. No eager buyers showing up yet…”

Our wealth and income specialist Zach Scheidt says: “I want to share a three-step checklist to help you protect your retirement wealth… during times of uncertainty.”

On the plus side, Zach cites incredibly low interest rates and the probability of another round of stimulus to goose the economy. “These are all positive tailwinds for investors,” he says. “At the same time, it's important to be prepared to weather some volatility over the next several weeks.

“But it's certainly no time to panic.” As for staying cool, calm and collected, he suggests…

“Keep some cash on hand,” Zach says. “When you hold cash, you're ensuring that a portion of your wealth can't be hurt by a market pullback.

“Cash in your account [means] you can afford to pay your bills and cover day-to-day expenses for a few months without having to sell an investment at the wrong time.”

Here’s a thought: “If you're currently holding stocks that have profited from the market rebound,” Zach says, “it could be a great time to sell part of your position to add cash to your account and reduce the risk that a pullback would pose to your retirement.”

A word of caution? “With such low interest rates… too much cash [is] largely unproductive.

“An overall pullback for the market can sometimes lead to accelerated gains for some of the market's most stable stocks.

“I'm a big fan of blue chip companies that pay reliable dividends,” Zach says. “Some of these stocks deserve a spot in your retirement account — regardless of what season the overall market is in.

“During times of uncertainty, dividend stocks should represent an even bigger portion of your investments because of the income and stability they provide.”

Added bonus: “If you increase your position in dividend stocks today,” Zach says, you can reinvest some of that generated income “in growth opportunities at a cheaper price after a pullback.

“Make a list of stocks to buy at cheaper prices,” Zach says.

But even when your favorite stocks are trading lower, “most investors… don't follow through buying during a pullback.”

So Zach recommends: “Write down a list of 10 stocks that you wish you owned. You can even put a price point for each that you'd love to buy the stock at.

“By writing down a list of stocks you want to own and the price that you're willing to pay,” he says, “you're taking emotion out of your decision-making process and managing your retirement investments like a professional.”

Pro tip: “Buy a bit at a time, let’s say over a few weeks,” Zach says. “That way if the stock drops farther than you expect, you'll be able to buy some shares even cheaper.”

Zach concludes: “Today's… environment is full of crosscurrents that can be difficult to navigate,” he says. Take the necessary steps to buffer your retirement savings today. 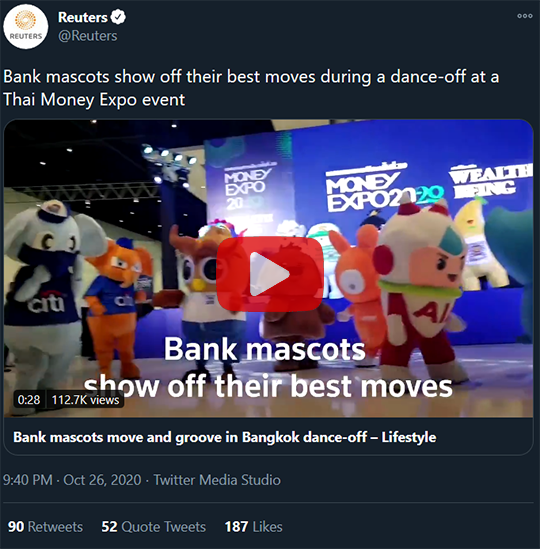 Anyhoo, from what we can find, the Money Expo celebrates “financial innovation to create wealth and showcase innovation, investment, finance, create dimensions.” Whatever that means…

Huh… who even knew banks had mascots? And we can certainly come up with better mascots than elephants, owls and Pikachu knockoffs.

Might we suggest oversized bank CEOs? Particularly those instrumental in the Panic of 2008? Lloyd Blankfein, Jamie Dimon and BOA’s Ken Lewis would do. Now, that’s a dance-off!

P.S. Jim Rickards has landed on a little-known investment play that’s moved 21 times HIGHER — on average — than the price of gold bullion during the last “gold window.”

When this window opens up in the gold markets…

But the clock is ticking… View this message before it closes at MIDNIGHT.