“I'm not aware of any forecaster who said the presidential race would come down to Nevada, but there we are,” says Jim Rickards.

We warned three months ago that Election Day was likely to turn into Election Week or Weeks. At this stage, the best way to think about it is to keep this drop-dead date in mind — Tuesday, Dec. 8. That’s 34 days from today.

More about that shortly… but first, the state of play: Going into yesterday, and assuming Joe Biden won Arizona, Jim laid out what he called “the two critical scenarios”…

Since then, Biden has picked up Michigan and Wisconsin by most estimates — including both The Associated Press and the Fox News “Decision Desk,” which has an unblemished record going back nearly 20 years.

So yes, it all comes down to Nevada. Not that election officials there seem to be in a hurry or anything… 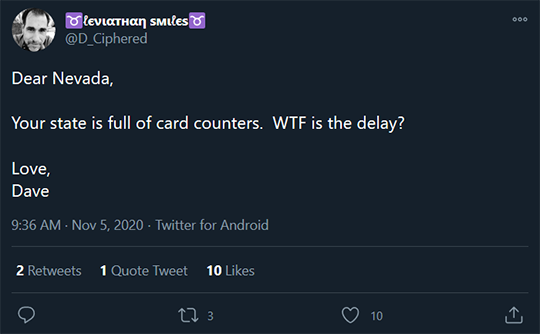 And if not every state pulls that off? Here are some scenarios Jim Rickards lays out going forward…

“In this scenario,” Jim says, “the House could choose Donald Trump even if Trump loses the popular vote and trails Biden in the electoral vote. This happened in 1824.”

All that said, “my macro forecast does not change very much based on who wins the White House,” Jim writes in an email to his research team.

The Federal Reserve can print money… but it can’t force people to spend money if they’re too scared to do so. That makes inflation harder to come by. Meanwhile, Congress can pass a new “stimulus” bill… but the national debt is so huge relative to the economy that no amount of stimulus can generate the desired growth.

Meanwhile the elite media are flummoxed by the Biden landslide that never materialized. 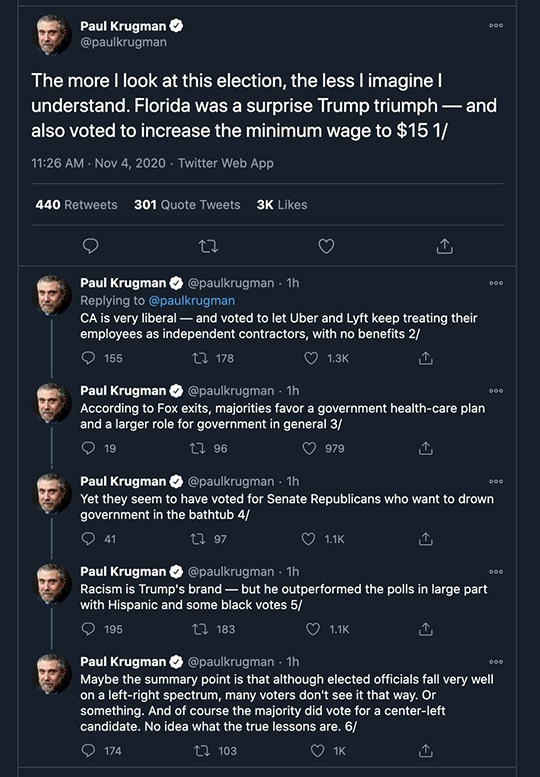 In one sense, you might call it a resurgence of “Pauline Kael Syndrome” — named after a notorious misquote of The New Yorker’s legendary film critic. As the story goes, she was shocked by Richard Nixon’s landslide victory in 1972 and remarked, “How can he have won? Nobody I know voted for him.”

What she actually said conveyed more awareness of her bubble: “I live in a rather special world. I only know one person who voted for Nixon. Where they are I don’t know. They’re outside my ken. But sometimes when I’m in a theater, I can feel them.”

Nearly 50 years later, the media elites have lost even that modest capacity for introspection.

True, for a few weeks in 2016, they gave lip service to trying to better understand Middle America. But as the journalist Zaid Jilani says, that lasted “about two months until enough people yelled at them on Twitter [that] they went back to being straight Dem partisans.”

This time they’re not even bothering with the reflection stage — to wit, Mr. Krugman above.

Nor will it get any better. As Robby Soave writes at Reason, “Many young rising stars in the world of investigative reporting think newsrooms have wrongly prioritized objectivity and should move toward a kind of ‘moral clarity’ that is likely to make their institutions even more confused about why millions of people — roughly half the country — have aligned themselves with Donald Trump.”

What was it Jim Rickards was saying about gold a few moments ago?

Stocks? At last check, all the major U.S. indexes have ripped at least 2% higher on the day. At 3,518, the S&P 500 is only 1.8% below its record close set in early September. If this trend holds, the market will notch its biggest weekly gain since April.

Among the more interesting market movers this week is American Outdoor Brands, maker of Smith & Wesson firearms. When widespread riots did not materialize Tuesday night, AOUT cratered nearly 9% on the open Wednesday morning. It’s climbing back now, but remains below Tuesday’s levels.

➢ By the time you read this in the afternoon, Federal Reserve chair Jerome Powell will be holding his every-six-weeks press conference. We’re guessing it’s probably too soon for him to mash the monetary gas pedal again… but we’re getting a preview of coming attractions from the U.K.: Earlier today the Bank of England announced nearly $200 billion in extra money printing as England goes back into lockdown for four weeks.

On the little chart of horrors, we see first-time unemployment claims fell slightly to 751,000 in the week gone by — still stubbornly higher than the pre-pandemic record set in 1982. Just for “fun,” here’s what it looks like on a very long-term chart — with records going back to 1967. 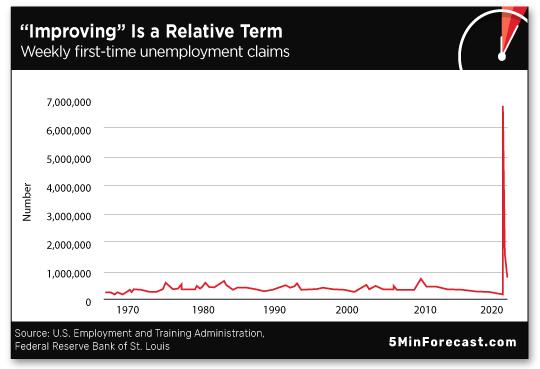 Tomorrow brings the October job numbers. Barring any surprises, they should be a repeat of September — getting better, but at a slowing rate.

The latest pandemic-driven bureaucratic diktat isn’t quite as draconian as Michigan restaurateurs feared.

As mentioned here on Tuesday, my wife and I went out to dinner the night before — and were confronted by a request to fill out name and phone number in a notebook, the better for contact tracing. The state thrust the new requirement on restaurants and bars with only four days notice, and many details still unsettled.

Since then, the state ACLU has stepped up and reminded the busybodies in Lansing that people retain “fundamental rights to privacy and association.” Glad someone thinks so.

So the rules have been revised: Restaurants must still ask for the information, but patrons can refuse to provide it and it’s up to the restaurant to decide whether to seat the patrons anyway. Nor can the info be handed over to law enforcement or immigration authorities without a subpoena.

The Michigan Restaurant & Lodging Association is mollified, for now. “We’ll see how this works out,” CEO Justin Winslow tells the BridgeMI website.

Oy… We’re hardly the first to point this out, but one of the grim injustices imposed by the control freaks and power trippers since March is this: Front-line enforcement of their edicts often falls to low-wage service personnel.

Not what they signed up for. Hell of an unfunded mandate…

“Enjoying The 5 as usual!” he prefaces his remarks. “However, there is a glaring error in your chart comparing the Fed balance sheet with the S&P Index for the year.

“Perhaps the lines got confused by all the election nonsense? It was the S&P that dipped 30%-plus in March, not the Fed balance sheet. But since June looks about right.

“And thanks for printing reader replies from different points of view!” 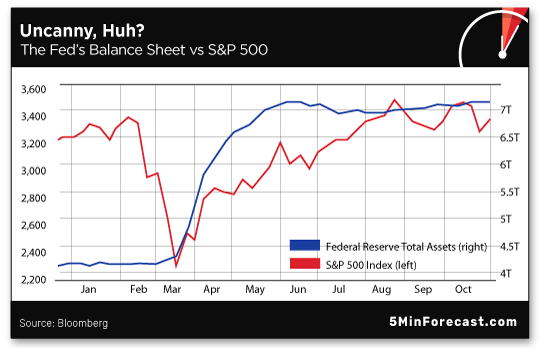 Another reader writes to ask if there’s a more recent version of the chart we shared on Tuesday depicting average family income adjusted for inflation — which shows everyone below the top 10% losing ground from 2002–2012 and the top 0.01% making out like bandits.

The answer is no, not as far as we can tell. But it’s such a powerful chart, saying so much in such little space, that we do look for a newer edition every so often. We can’t imagine the situation has improved much — but we’d like to have hard numbers to confirm our suspicion.

On the subject of “civil war,” past and present, a reader writes…

“Although many consider the American Revolution and the (American) Civil War to be ‘civil wars,’ neither of them technically involved parties warring over the political control of their nation. Neither was the Revolution truly a ‘revolution’ where a group seeks to overthrow the existing government.

“What Americans fought against Great Britain in the late 18th century was a war for independence, a war of secession if you choose. Likewise, the so-called Civil War was a war of secession. In neither case was a party trying to overthrow an existing government, only to part ways with it.

“Why don't we all call these conflicts the American War for Independence and the War of Southern Secession — or perhaps the War Between the States?”

The 5: Southerners did use those last two names for a long time. The most hardcore among them used “the War of Northern Aggression.”

When it comes to the present conflict, we’re seeing a very encouraging sign. (Who says we’re all doom and gloom around here?)

For the longest time, the notion of secession was inextricably tied up with slavery. If you supported even the most modest state-level defiance of the federal government, well, then you must be a racist, right?

We’re seeing a rethinking of that from the left, judging by the reactions this year to a book called Break It Up: Secession, Division and the Secret History of America’s Imperfect Union, by Richard Kreitner.

Kreitner calls out his fellow progressives who he says “too hastily dismiss one of America's founding principles — the right to alter or abolish a destructive form of government — as irreparably sullied by association with slaveholders."

Hear, hear. And this is a fellow who elsewhere in the book bemoans the “barely disguised racism” of traditional Southern whites and the “gnawing paranoia” of working-class Midwesterners.

Kreitner has gotten friendly reviews from the likes of The New York Times and friendly interviews by NPR.

This is all very good. If the left — however loosely defined — would prefer to cut the “deplorables” loose rather than impose their brand of tyranny on them… how can that be anything other than a positive development?

P.S. Congratulations to readers of Rickards’ Gold Speculator. This week they collected quick a 42% gain on an up-and-coming gold miner.

Yes, there’s more where that came from. Before you invest another penny into the precious metals sector, you owe it to yourself to check this out.