King of the Hill

“If we’ve learned anything [this year],” says technology devotee Ray Blanco, “it’s that tech stocks can survive nearly anything that’s thrown their way.”

“Take COVID-19,” Ray continues, “when the pandemic hit, the markets were equally affected across the board with some major downward action.

“But since we hit the bottom in March, tech stocks have come roaring back, outperforming the overall market.”

True, judging from the following graph… 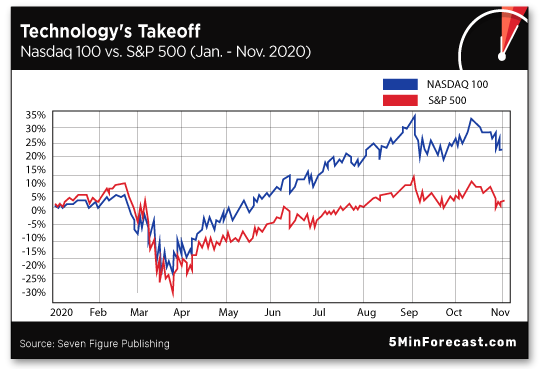 “Tech stocks on the year are up 22% while the overall markets are only up by almost 2.5%.” And that’s being generous.

“Remember… the overall markets include tech stocks,” says Ray. Meaning if you stripped out highflying technology stocks, the markets would be in negativeville. (The DJIA, for example, is down over 6% in 2020.)

Moving forward, Ray says: “My favorite tech sectors? I think three sectors will outpace the rest of the markets heading into 2021 and beyond.”

“Shifting away from gas guzzlers,” says Ray, “Americans have increasingly become interested in purchasing purely electric vehicles in the past few years.

“The major hurdle is a combination of charge times, the range of the EV between stations and the cost of the battery itself. Much of this is on its way to being solved,” says Ray.

“In October, Tesla (NASDAQ: TSLA) announced a battery that has a max life span of 2 million miles and increased the range to over 300 miles before needing another charge.

“A 2-million-mile life span means that you could, in theory, use the same battery for multiple cars.

“This would cut down costs dramatically,” he says, “as it’s estimated a battery… is almost half the cost of buying an electric vehicle” (emphasis ours).

Ray warns: “Tesla may lead the way, but don’t skimp on the rest of industry. There are EV startups, battery makers and automotive giants that want their own products to rival Tesla’s.

“With more and more EV innovation, we’ll see a rise in popularity.”

“The biotech sector [is] constantly innovating to either find new treatments or discover cheaper, more efficient ways to tackle a problem,” Ray says.

“Cannabis tech too looks to have a huge boost from this election,” Ray says. Marijuana legislation was on the ballot in five states, “and the possibility of federal legalization is more and more likely with a shift in public opinion.” (Montana, Arizona, New Jersey and South Dakota have approved marijuana ballot measures.)

With that in mind, “there’s a lot going for the biotech sector, to make it a surefire win heading into 2021.” Ahem… Ray didn’t even mention biotech’s race for a COVID-19 vaccine, but bear that in mind too.

“5G tech is faster than anything we’ve seen before,” paving the way for technology “that wasn’t possible with 4G.

“Higher bandwidth means more data can be downloaded at once — nearly 200X more [data] than 4G,” Ray says. That translates to reduced latency or “the lag between a device and the source that it came from.

“Lack of latency with 5G allows for better self-driving cars and machinery that can respond faster than a human,” he says.

Another advance in internet technology? “Internet directly from space gives those in the more rural parts of the world access to cheap high-speed internet for the first time,” says Ray.

“[Elon Musk’s] Starlink is leading the pack right now with its current public beta. And the results so far are amazing. People in rural Montana, for instance, are reporting 150 Mbps download speed.” 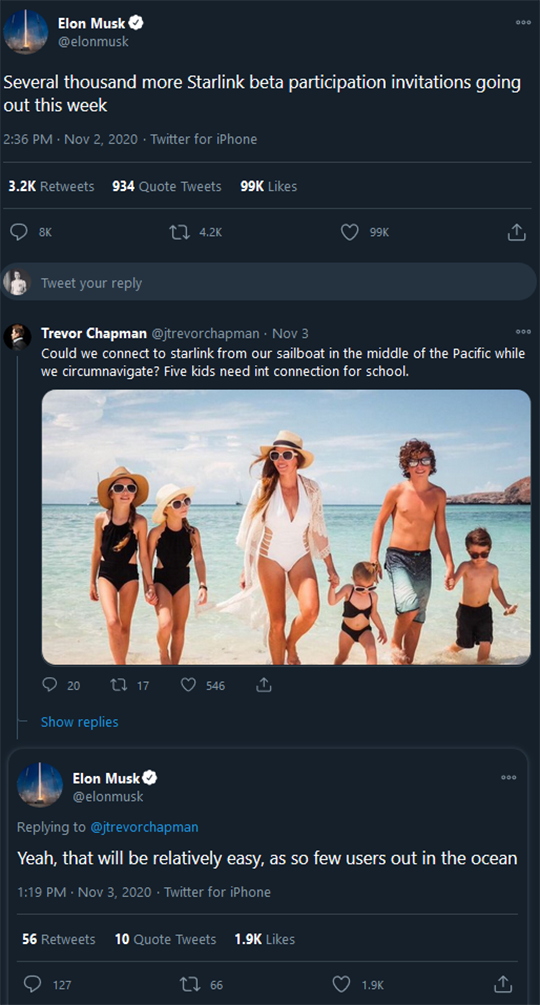 Just insufferable… but wish we were there!

[We could’ve gone so many different directions with that caption… heh. Suggestions?]

Ray’s final take? “Tech’s been largely unaffected by the world’s volatile events,” he says. Even given a contested election, Ray assures technology “will continue to thrive.”

Wednesday we said the market’s been reveling in indecision, approaching one of its best weeks since September…

For the major economic number today, the wonks at the Bureau of Labor Statistics scraped together 638,000 new jobs in October.

Reminder: It takes 150,000 new jobs just to keep up with population growth… to say nothing of recouping millions of pandemic job losses.

Another reminder? “The current employment recession is by far the worst recession since WWII in percentage terms,” says Calculated Risk, “and is still worse than the worst of the ‘Great Recession.’” 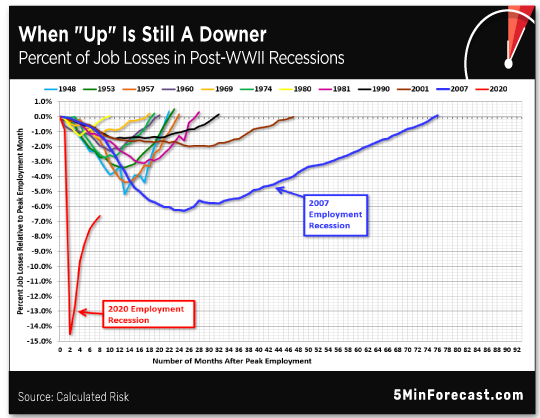 With that said, the BLS says: “In October, notable job gains occurred in leisure and hospitality, professional and business services, retail trade and construction.

“Employment in government declined,” the BLS concludes… rather wryly we think.

Iran is finding new ways to end-run the U.S. dollar — and presumably sanctions — this time with cryptocurrency.

In late October, Iran Daily reported the government’s new policy on crypto, smoothing the way for digital currency “exclusively used for funding imports at a time of increased pressure on the country’s normal use of hard currencies.”

Here’s where things get interesting: the Central Bank of Iran (CBI) will purchase crypto from “miners” at a reduced rate while subsidizing the massive quantity of energy it takes for digital mining.

Bitcoin Magazine notes: “With access to oil reserves and relatively cheap electricity, Iran can offer heavily subsidized power to miners and offset a bulk of the cost of mining cryptocurrencies like bitcoin for firms that play by their rules.”

So while China builds up gold reserves… is Iran building up bitcoin reserves?

“As Iran’s rial suffers from hyperinflation, its people are seeking an alternative store of value,” Bitcoin Magazine says. “Bitcoin would be a powerful tool to allow it to opt out of its failing fiat currency and circumvent international sanctions.”

A new front in the war on the USD? Stay tuned…

“The initiative's passage means that car manufacturers will be required to provide vehicle diagnostic data to consumers and independent mechanic shops.”

For further context: “The state's existing law — which became the basis for new national standards implemented by the auto industry in 2014 — required that vehicle diagnostic data was made available via an open platform.”

Meaning you could take your sputtering Honda to your trusted, local mechanic — we’ll call him Ron *wink* — rather than to a sketchy Honda dealership. (I’ve got the receipts… heh.)

“But the earlier law exempted wireless data transmitted via a car's telematics system,” Reason points out. “Increasingly, car manufacturers have been relying on telematics to transmit crucial data, potentially leaving independent repair shops in the dark.

“The new ballot initiative closes that loophole and requires wirelessly transmitted data to fall under the same open platform rules starting in 2022.”

What seems like a fairly mundane question on MA ballots is now the “most expensive ballot initiative campaign in Massachusetts history.

“The Massachusetts Right to Repair Coalition, a campaign group formed by independent mechanics and national car repair chains like AutoZone and O'Reilly Auto Parts, dumped more than $24 million into the race.

“The Coalition for Safe and Secure Data, a group backed by Ford, General Motors, Toyota and other car manufacturers, spent more than $26 million opposing the initiative,” Reason says.

“Consider the outcome of this expensive ballot initiative fight in Massachusetts to be one more small victory for freedom.” Sooo… not exactly a David and Goliath story, but we’ll take a win for the little guy any day…

A savvy reader corrects an error in Thursday’s episode of The 5: “Smith & Wesson and American Outdoor Brands parted ways six months or so ago.

“American Outdoor Brands (AOUT) and Smith & Wesson Brands (SWBI) are now separate independent companies. They're also both up around 200% since the split was announced, and SWBI pays a dividend as well.

“Full disclosure: I'm long on both — and really happy about it.”

The 5: Apologies. It’s been a long week… but thank you for the correction. Most helpful…

Speaking of long week, here’s a reader’s tongue-in-cheek (we think?) take on secession: “Why pretend we’re one big happy family when we’re not? Just make the divide official.

“I realize there may be a few sticky issues to work out. It’s not quite as simple as East Coast/West Coast. We would have to work out something for the Chicago/Minneapolis corridor and some other pesky things that no doubt would cross state lines.

“And working out the details and logistics might start a shooting war (how to divide the debt comes to mind as an example, although things like manufacturing and resources could also prove interesting).

“And to keep lobbyist money to a minimum, let’s put the New United States capital in southwest Kansas or the panhandle of Oklahoma. All federal buildings will be pole barns. Commuter planes only at the local airport.

“I’m not sure the ego of today’s caliber of politician or lobbyist could handle that, and we might get a new breed of the former and exterminate the latter (or let them all stay in the People’s Republic of Orwell).

“Forget about bitcoin for a minute. To all these states that are still “counting votes,” have they ever heard of blockchain technology? It would eliminate voter fraud and provide instant results.

“Oh, wait… That would hurt the revenue the MSM is enjoying from this ridiculous circus. Not to mention eliminate some of the back-alley (criminal) advantages that some politicians currently enjoy.

With that, we retreat for the week… Try to enjoy your weekend, and we’ll be back Monday.

P.S. They’re being sent to over 300 million Americans this year. You may have already received it without even knowing.

But this 0.2-inch supercomputer will change the way you shop forever.

It’s expected to revolutionize a projected $4.7 trillion market… And it’s no bigger than a single grain of rice.

For those who get in ahead of the pack, it might produce a windfall over the coming year.