It might be the most under-reported story of the entire 2020 campaign cycle.

Well, it was right there in “respectable” mainstream sources. But you had to look real hard to find it… 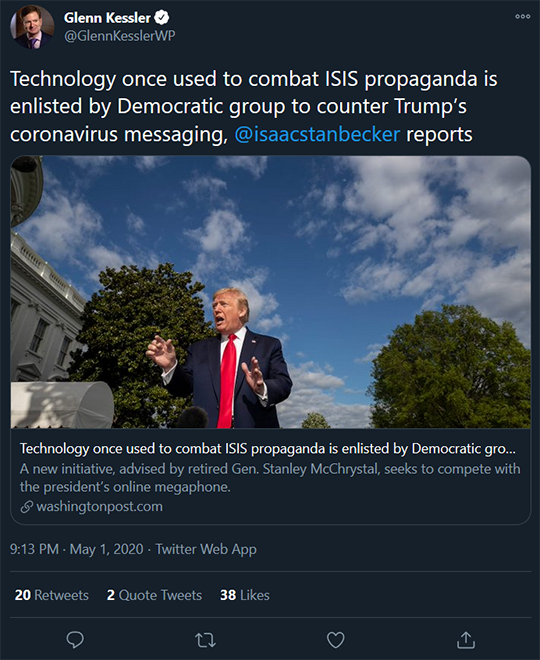 From The Washington Post, May 1: “A new Democratic-aligned political action committee advised by retired Army Gen. Stanley McChrystal, the former head of U.S. forces in Afghanistan, is planning to deploy technology originally developed to counter Islamic State propaganda in service of a domestic political goal — to combat online efforts to promote President Trump’s handling of the coronavirus pandemic.”

The outfit was called Defeat Disinfo. It deployed an artificial intelligence tool first spun up by the Pentagon. The purpose — combating Trump’s social media posts, creating “counter-narratives” via a network of “paid influencers.”

Is there any clearer instance of how an empire’s war-making against distant peoples eventually comes home and is turned on its own citizens?

Well, aside from militarized policing, of course… 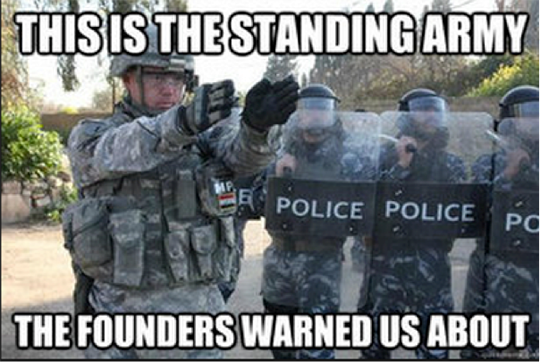 “One would have thought that the McChrystal revelation would have generated more controversy.”

But no. The power elite and the deep state thought it completely valid and justified in service to the goal of removing Orange Hitler. Ends justify the means and all that.

Assuming their efforts have succeeded, the question follows: Now what?

Back to the pre-Trump “normal,” right?

Hardly. Meet Richard Stengel, who aspires to a position of authority that in third-world dictatorships might be called the minister of information… 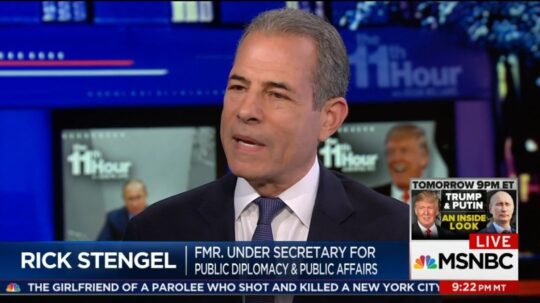 Stengel spent more than a quarter-century at Time magazine, working his way up to managing editor from 2006–2013. Then he joined the Obama administration as “under secretary of state for public diplomacy and public affairs.” When the Trump administration came in, he went back through the revolving door to MSNBC.

Now he’s part of the Biden transition team. His remit is the U.S. Agency for Global Media — the bureaucracy responsible for U.S. state media/propaganda overseas, including Cold War-era relics like the Voice of America.

Except Stengel thinks it’s long past time for Washington to start propagandizing you and me, too.

“My old job at the State Department was what people used to joke as the chief propagandist,” Stengel said during a Council on Foreign Relations panel in 2018. “I’m not against propaganda. Every country does it, and they have to do it to their own population. And I don’t necessarily think it’s that awful.”

But wait, there’s more. “Having once been almost a First Amendment absolutist,” he went on, “I have really moved my position on it, because I just think for practical reasons in society, we have to kind of rethink some of those things.”

His rationale? “Disinformation” is too much of a threat to the body politic — and we peasants are too stupid to discern fact from fiction.

As Ben Norton writes at The Grayzone of that 2018 forum, “Stengel stated clearly that a ‘news cartel’ of mainstream corporate media outlets had long dominated U.S. society, but he bemoaned that those ‘cartels don’t have hegemony like they used to’.”

Make no mistake: It’s a return to these “good old days” that the power elite seeks.

It’s what we’ve been saying for more than two years, ever since the “deplatforming” of Alex Jones by a host of social media outlets.

As Zach Weismuller wrote for Reason, “Washington sees in Silicon Valley a chance to control speech in a way never before possible under the First Amendment, and to roll back the clock to a pre-internet age of media gatekeepers.”

Yes, a “golden age” when everyone got their news from — well, Stengel’s old employer Time magazine for one, along with CBS News and of course The New York Times.

Said gatekeepers can be relied on to set the boundaries for “acceptable” discourse — the equivalent of the 40-yard lines on a football field, defined by Hillary Clinton on the left and Jeb Bush on the right. Anything outside those boundaries amounts to “disinformation,” or even “hate speech.”

➢A tale from those “good old days”: The author Simon Louvish tells the story of some Soviet writers who came to visit the United States in the early ’80s, before Mikhail Gorbachev took power and began his “glasnost” reforms. These writers were stunned to read the newspapers and watch TV… and find the opinions expressed on the major issues of the day were all the same.

“In our country,” they said, “to get that result, we have a dictatorship, we imprison people, we tear out their fingernails. Here you have none of that. So what’s your secret — how do you do it?” How indeed?

Defenders of Silicon Valley’s sundry crackdowns inevitably say these are private companies and they can do as they please. If only it were that simple.

“It's not just private companies acting on their own accord,” says the journalist Matt Taibbi. “They are private companies that got called [to Capitol Hill] after Trump got elected, and overtly threatened with increased regulation,” he tells our acquaintance Demetri Kofinas on the Hidden Forces podcast.

“Most of these companies had long histories of not wanting to be in the fact checking or political content moderation game. Mark Zuckerberg right before the 2016 election was saying, ‘We're not a news organization. We're a tech company.’ And then they get hauled in by the Senate. They get ordered, ‘Where is your plan for preventing the fomenting of discord?’… Told if they don't do that, there's going to be tax penalties and all kinds of other things.

“They suddenly have to enter into partnerships with the FBI and groups like the Atlantic Council. The FBI calls them private-sector partnerships now. So they're being advised on what is and what is not fake news by groups full of former intelligence officials and big corporate donors and overseas donors.” 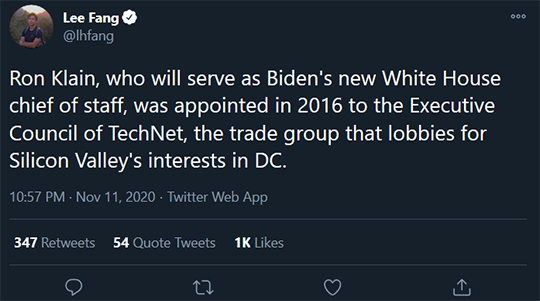 Going forward, anyone who strays outside those 40-yard lines is at risk of being labeled a “domestic terrorist.”

So says the tireless Glenn Greenwald — whose conscience led him to resign last month from The Intercept, the media outlet he co-founded in 2014. Its editors refused to publish an opinion piece he wrote because it committed the unpardonable sin of putting Joe Biden in a bad light before Election Day.

Consider the conundrum traditional media outlets face now. They railed incessantly against Trump… but at the same time, Trump was the best thing to happen to their readership and viewership levels in years. As CBS’ then-CEO Les Moonves said in 2016, the rise of Trump “may not be good for America, but it’s damn good for CBS.”

As Greenwald explained recently on Joe Rogan’s podcast (going on Rogan was another unpardonable sin committed by Greenwald), “Trump was a godsend to them because Trump enabled them to elevate everybody’s fear levels and say this man who’s coming isn’t just another president, he’s a grave threat to everything that’s good in our life. And not just him, but his entire movement behind him.”

So if Trump’s on his way out the door, how do the media keep the fear levels amped up?

After all, “They’re not going to just go back to talking about Joe Biden because they know people are going to cancel their subscriptions and turn the TV channel again. They’re going to continue to say… Trump or at least his movement still pose this existential threat…

“They’re going to inflate it wildly so that any questioning of Joe Biden, even with Trump out of the picture, is still going to be depicted as endangering American liberty, as helping fascism, as serving the agenda of the Kremlin.

“And the ‘need’ for censorship as a result is going to be accepted by more and more people because of that fear that these media outlets and government institutions with whom they partner are going to still be instilling in people for their own benefit.”

“The media has fed off this narrative and profited greatly off of it — that the Republicans and conservatives are not just standard political adversaries, they’re actually white supremacist and fascist terrorists trying to implement violent coups…

“That’s going to allow agencies like the FBI and the NSA to investigate domestic dissidents against a Biden-Harris administration on the ground ‘we’re not searching out our political adversaries, we’re searching out domestic terrorists.’

“They’re also going to, in turn, pressure their friends at Google and Facebook and Twitter, who have funded them, to continue to censor their critics on the grounds that they’re not just critics but they’re national security threats.”

So get ready for the “fear factory” to ramp up production — the federal government’s secret-police agencies along with traditional media and social media.

What are the practical consequences? Even before Election Day, the aforementioned Mr. Taibbi was engaging in self-censorship.

“The other day,” he said on Hidden Forces, “I wrote an article where I was going to talk about why I didn't want to vote for either party in this election, and I thought about the headline. And the headline was going to be Vote for Neither. But I knew that that would actually trigger Twitter's policy against discouraging people from voting. So I had to change the headline.”

Yeah, we saw that one coming last year.

We’ll have much more to say on this topic in the weeks and months ahead. But why are we even bringing it up in an e-letter whose usual beat is the markets and the economy?

The answer is it’s our heritage. From the earliest days of our trade, financial newsletter editors have trafficked in ideas outside the mainstream.

Nearly a century ago, Roger Babson warned the Roaring ’20s were destined to end in tears. (They did.) Fifty years ago, Harry Browne urged readers to drop the “Nifty Fifty” stocks and pile into precious metals as the last vestiges of the gold standard were being killed off. (Good advice then.) Just over a quarter-century ago, James Dale Davidson warned about The Plague of the Black Debt. (It still plagues us.)

Across the decades, up to the present day, newsletter editors give voice to a nagging feeling people have in the back of their minds — that reality isn’t the way the mainstream gatekeepers portray it. We daresay financial newsletters were the pioneers of “alternative media.”

Point being — and this is the good news in an otherwise depressing single-topic episode of The 5 — financial newsletters filled a crucial information gap during those “good old days” when there was no internet and the media were dominated by three nightly newscasts all taking their cue from that morning’s New York Times.

So one way or another, we’ll still be there in the 2020s even if social media platforms want nothing to do with unsavory types like us.

And because we don’t rely on advertisers to pay the bills — the vast majority of our revenue comes from readers like you — you can be confident our editors are speaking their truth, with no conflicts of interest and no hidden agendas.

With that in mind, we thank you for your past readership — knowing that our future success rides on a nonstop process of earning your trust.

Back to regular programming tomorrow.