“It’s nice to know that someone with a Harvard Law degree and the tenacity of a criminal prosecutor has the Fed in her crosshairs,” says a blogpost at Wall Street On Parade.

After taking a closer look at the Fed’s $500 billion corporate bond buying gambit, Porter had some questions for Mr. Quarles: “The Federal Reserve stated explicitly in this document [holds up document] that it would not be purchasing bank debt,” she said. “What happened?”

The document was, in fact, the FAQs from the Federal Reserve’s own website about its corporate bond buying conditions. And it plainly states the Fed would abstain from buying debt of an “insured depository institution” — or bank bonds.

Quarles: “We haven’t bought bank debt in those facilities.”

Porter: “Exchange-traded funds… are just baskets of stocks [or corporate bonds] issued by a variety of companies. And is it not correct that the Fed bought $1.3 billion in ETFs?”

Porter: “My question for you is how much of that was bank debt — in the exchange-traded funds?”

Quarles: “I can get that information for you. I don’t have the numbers in front of me.”

Porter: “Well, it was a lot… and it’s a big problem that you did this… In fact, 15% of all those ETFs purchased was for big banks.”

Wall Street On Parade says: “After some back and forth, Porter asks Quarles who is the world’s largest issuer of ETFs. Quarles hesitates and Porter says ‘BlackRock’…

“Porter then asks Quarles if the Fed hired BlackRock to buy up BlackRock’s own ETF products.”

And that was a rhetorical flourish… 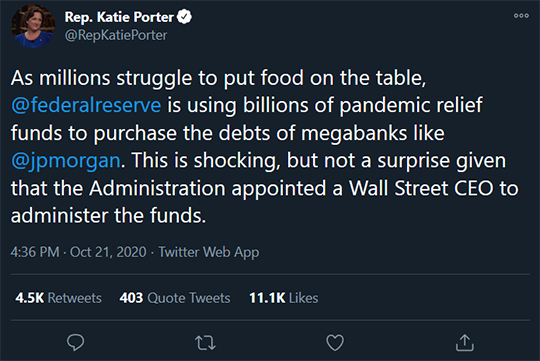 Clearly a “gotcha” moment, and to think that’s just one example of government/Wall Street’s duplicity. How does Main Street begin to safeguard against it… much less compete?

“Gold is a hedge on policymakers screwing up,” Jared Dillian says at Bloomberg, “and there has been a lot of screwing up in the last 20 years.”

Mr. Dillian has firsthand experience with screwups; in fact, he wrote about it in his memoir Street Freak: Money and Madness at Lehman Brothers.

“Gold is a hedge on government authorities making poor economic choices,” Dillian repeats. How else to explain gold’s meteoric ascent over the last two decades? 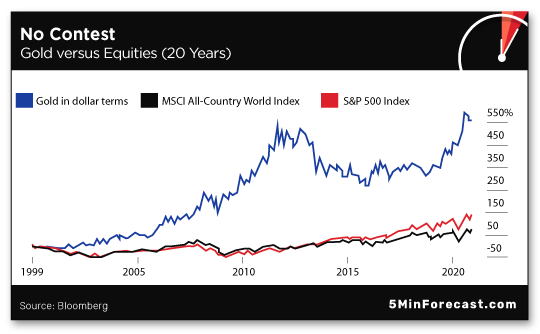 “Gold has significantly outperformed stocks this century,” he says, “gaining about 555% versus 79% for the MSCI All-Country World Index of stocks and 146% for the S&P 500 Index.

“This is a direct result of significantly looser financial conditions, and no constraints on monetary and fiscal policy,” Dillian says. And what a difference in 20 years…

“The year 2000 is of interest because… the target federal funds rate was 6.5%, real interest rates — or those after inflation — were strongly positive, the federal budget was balanced and the dollar was strong…

“With the benefit of hindsight, the period where we had strong currencies and high interest rates looks to be an aberration,” Dillian says. “There are few times in history when governments can resist the temptations of easy money and loose financial conditions.”

“Interest rates are effectively zero (and negative after taking inflation into account), the Federal Reserve has bought a range of risky assets in the course of pumping some $3 trillion into the financial system this year as part of its quantitative easing policy and the U.S. budget deficit is the widest ever at $3.1 trillion…

“So if investing in gold is a bet on authorities doing the wrong thing,” Dillian says, “the best way to diminish the allure of gold… is to run balanced budgets.”

Riiiight… Looked at another way, he says: “You have to be pretty cynical to root for gold to go up, because it is an explicit bet on things getting worse.”

Notwithstanding, “Cynicism is abundant,” he notes. “Nobody really believes that any government official has the political will to reduce or eliminate the deficit, talk up the dollar or prod the Fed into a more hawkish composition.

“What I’m describing, of course, is fiscal conservatism at a time when both Democrats and Republicans have become more fiscally liberal,” says Dillian. “The idea that we can print or spend our way to prosperity is very seductive. It takes no effort. But it’s not how wealth is created…

“The job of the government and the central bank [is] simply to create the conditions necessary for people to prosper,” he concludes. “They are not doing a very good job at it, judging by the price of gold.”

[Ed. note: If you want to safeguard your portfolio against policymakers’ screwups while maximizing gains, take a look at what Hard Assets Alliance can do for you.

We’re unabashedly biased — having taken a stake in the company — but for good reason.

Hard Assets Alliance allows you to buy and take delivery of gold and other precious metals with exceptionally low costs. Or with a single click, you can buy and store your metal in your choice of five audited vaults worldwide.]

Checking on Mr. Market today: He seems glum after the CDC warns against traveling for Thanksgiving.

Now for our Thursday disturbance, we take a steely-eyed gaze at weekly unemployment claims… 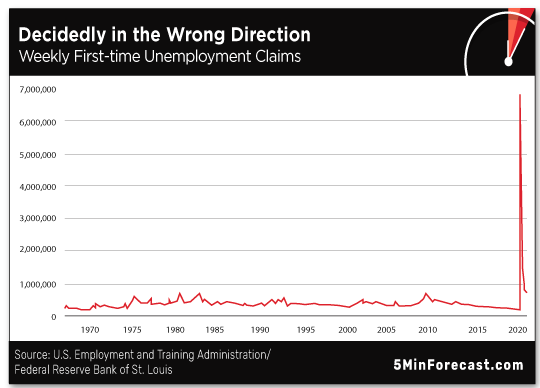 For the week ending Nov. 14, the figure for initial unemployment claims comes in at 742,000, increasing 31,000 from the week before and still above pre-pandemic levels. Most definitely moving in the wrong direction.

“Almost 200 corporations have joined the ranks of so-called zombie firms since the onset of the pandemic,” Bloomberg says.

This according to Bloomberg’s analysis of 3,000 publicly traded companies. “In fact, zombies now account for nearly 20% of those firms.”

So what’s the criteria for Walking Dead classification? “A key criterion, as most market experts define it, for zombie status” is a company that’s not “earning enough to cover their interest expenses,” Bloomberg says.

And some big-name, iconic companies are joining the “undead” ranks — companies including Boeing, Carnival, Delta and Exxon Mobil.

“Even more stark, they’ve added almost $1 trillion of debt to their balance sheets in the span [of the pandemic], bringing total obligations to $1.36 trillion,” says Bloomberg. “That’s more than double the roughly $500 billion zombie companies owed at the peak of the financial crisis.”

Bloomberg continues: “The consequences for America’s economic recovery are profound.”

Here we go again: “The Federal Reserve’s effort to stave off a rash of bankruptcies by purchasing corporate bonds might very well have prevented another depression.

“But in helping hundreds of ailing companies gain virtually unfettered access to credit markets,” Bloomberg concludes, “policymakers may inadvertently be directing the flow of capital to unproductive firms, depressing employment and growth for years to come.”

Ugh… How about some hopeful news?

“Biotech is working on cancer therapies [that] have less to do with treating cancer than treating the side effects of cancer drugs,” says science-and-technology maven Ray Blanco.

Ray’s also a cancer survivor, so he speaks from personal experience. “I still remember the day I showed up at a cancer center for therapy,” he says. “The technician asked if I had experienced hair loss. I said no. [But] my hair had started falling out that very day… I hadn’t noticed yet.

“Hair loss can be distressing,” says Ray, “but other side effects are far worse. One is neutropenia, caused by the ongoing destruction of neutrophils, a type of white blood cell important for our immune system to function.

“The decrease in these white blood cells makes a patient far more vulnerable to infection,” says Ray, “since these little soldier cells aren’t around in enough numbers to perform their defensive duties.

“Reducing their numbers makes it more likely that a cancer will come back stronger than ever once it has adapted to a chemotherapy drug,” Ray emphasizes.

Now biotech companies are addressing this problem with experimental therapies “designed to combat neutropenia by increasing the production of neutrophils,” Ray says.

Here’s how it works: A “targeting molecule… helps prolong the half-life of [chemotherapy] in the body while also binding to bone marrow cells responsible for neutrophil production. There, they help stimulate production of fresh neutrophils.”

These experimental therapies are in clinical trials that have been disrupted by the coronavirus pandemic, but Ray notes: “We could potentially be weeks away from this important catalyst” in a cancer treatment breakthrough.

Someone in Japan is a serious citrus lover! Or just trying to stave off scurvy?

A press release from the JA Nishiuwa Agricultural Cooperative notes an anonymous buyer shelled out 1 million yen — or $9,600 — for a crate of mandarin oranges. 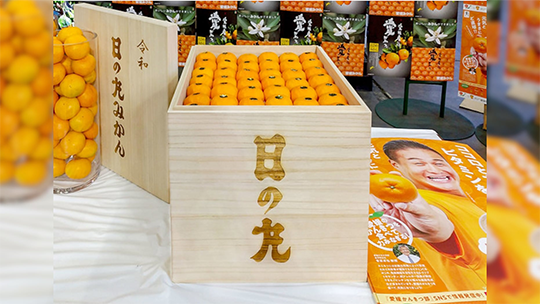 Although these aren’t your garden-variety (heh) mandarin oranges. “The mandarin oranges grown in the Nishiuwa district of Japan are also known as satsuma mandarin oranges, which are prized for being a sweet, seedless and easy-to-peel citrus fruit,” Fox News says.

Plus, according to Nishiuwa Agricultural Cooperative’s director Kazuhiro Takenaka: “This year's Nishiuwa oranges also have an excellent balance of sugar content and acidity.”

An “excellent balance” of sweet and sour? That’s more than we can say for the rest of 2020…

P.S. One of the best ways we know to buy and store gold, silver and more is with Hard Assets Alliance. Why do we like this service so much?

One reason — if you choose to store your physical metal in one of their five vaults worldwide — Hard Assets Alliance will make sure your account is fully allocated, meaning your holdings are never pooled with anyone else’s.

As always, our firm owns a piece of Hard Assets Alliance, so you should assume we’ll collect a small cut once you fund your account.