Ahh, a scheme we wholeheartedly champion… 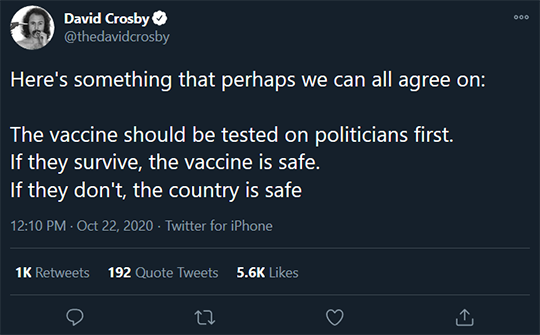 We endorse this message.

But until swamp creatures become test subjects, we’re left to sort through the available vaccine data…

“Successful outcomes from vaccine clinical trials point to a potential turning point in the fight against COVID-19,” says our science-and-technology authority Ray Blanco.

Ray notes for most of 2020, we’ve been playing defense, having precious few resources to go on the offense against the novel coronavirus, but the tide seems to be turning in November.

“Early in the month we received data from Pfizer’s mRNA-based vaccine,” he says, “developed with the help of European partner BioNTech.” Initial data indicated 90% efficacy protecting volunteers from acquiring COVID-19, and that number ticked up 5% at the conclusion of Phase 3 clinical trials.

Moderna — with its own mRNA-type vaccine — had a nearly identical effective rate of 95%.

Ray says: “Millions of doses of these vaccines, when deployed to the front lines of our first responders, will help us slow the spread of COVID-19.”

But there are caveats: We noted last week that Pfizer’s vaccine must be stored at nearly -100 degrees Fahrenheit in order to remain stable.

“Moderna’s vaccine fares much better,” says Ray. “The company’s lipid nanoparticle technology stabilizes the mRNA constructs well enough that it can sit in a refrigerator for a few days before dosing, but even it needs to be stored at -4 degrees Fahrenheit for longer-term storage.”

Certainly, Pfizer and Moderna’s laboratories have the cold storage — or ultra-low temperature (ULT) refrigeration — that’s needed to keep their vaccines stable and viable.

“The issue,” Ray points out, “is what will [these companies] do when it comes to transporting the vaccine?”

“In the case of their own vaccine, Pfizer has developed a special shipping container that keeps the contents cooled at -100F for up to 10 days,” says Ray. “What’s more they’ve added a GPS tracker to each container and have a system to know if any of the containers go below the [threshold].”

More promising news? Pfizer doses can be stored in a standard refrigerator for up to five days, but once the shipping containers are opened, they have to be restocked with dry ice. “This requires a massive amount of coordination on all parties involved,” Ray notes.

“The real problem for this vaccine is what happens to it once it gets to the hospitals,” says Ray. “Many rural hospitals, for instance, do not have ULT freezers at their facilities.”

To get a lay of the land then, “the Centers for Disease Control and Prevention asked each state to turn in distribution plans on Nov. 2, imagining a scenario in which a vaccine with Pfizer’s specifications came first,” says an article at ProPublica.

“Many [states] struggled with how to handle a Pfizer-like vaccine,” says ProPublica. One example? “Washington state’s Health Department does not have its own warehouse that can store the Pfizer vaccine at a cold enough temperature.” That’s at the state level… much less the local hospital level.

“This… is why many hospitals are looking to purchase their first or expand on their own ULT freezers,” Ray says. And “no company is better suited to benefit from this surge in demand than Thermo Fisher Scientific (NYSE: TMO).

“Thermo Fisher is one of the top four ULT makers globally,” he says. “And these four companies make up half of the ULT market in total.” But of the four, TMO is the single publicly traded company.

Another bonus: Thermo Fisher’s “huge range of ULT products… fit the needs of the largest or smallest hospitals or labs,” Ray says.

He continues: “I believe this [trend] is not only a short-term surge, but a long-term trend for growth in the ULT freezer industry.”

One thing is crystal clear, Ray says. Pfizer and Moderna’s mRNA vaccines need to be kept at arctic temperatures because of their unstable properties. “With the development of more mRNA vaccines in labs and hospitals,” Ray concludes, “more ULT freezers will be needed to store them.” 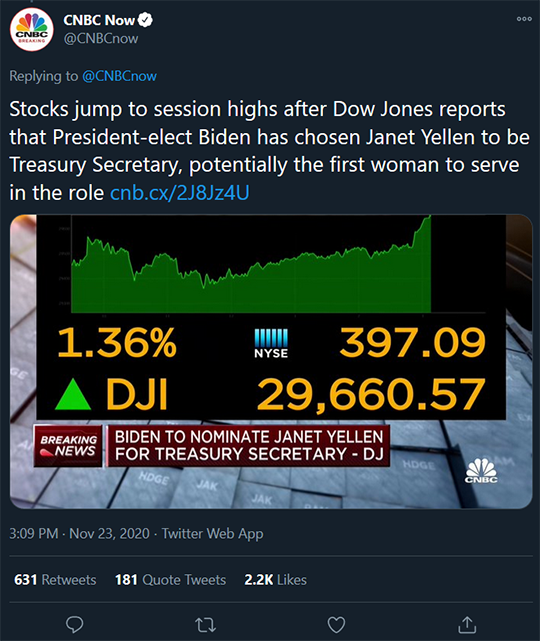 “It looks like Janet Yellen will be Biden’s pick for Treasury secretary,” says market analyst Greg Guenthner. “The market loves the move since Yellen has a history of dovish action as Fed chair.” (Heh… more on that to follow.)

Greg adds: “Then there’s the news that the GSA is moving forward with the transition of power to the Biden administration, which is the clearest indication so far that Trump’s ready to step aside despite the claims of election fraud.

“Looks like that’s what we’re getting and the stocks are responding positively.”

With stocks taking flight — you guessed it — gold’s barely white-knuckling above $1,800 per ounce. Silver? Down 1.7% at the time of writing.

Now for a bit of recovered history, we turn to an April 6 interview with the woman of the hour, Janet Yellen.

CNBC said at the time, “The central bank has… received special powers during the coronavirus outbreak to buy other assets such as corporate debt through exchange-traded funds.”

But former Fed Chair Yellen went on record saying the Fed’s powers should be even more elastic. “It would be a substantial change to give the Federal Reserve the ability to buy stock,” she said. Well, yeah…

“I think intervention to support the credit markets is more important,” said Yellen, “but longer term it wouldn’t be a bad thing for Congress to reconsider the powers that the Fed has with respect to assets it can own.”

And Mrs. Yellen went on to play the comparison game. “The Fed… is far more restricted than most other central banks,” she said.

The example cited? “Other central banks — including the Bank of Japan — have been purchasing some of their countries’ stocks to mitigate the recent carnage sparked by the coronavirus outbreak,” said CNBC.

The “sugar rush” for Japan’s economy seems to be working with a third-quarter GDP surge (for whatever that’s worth).

*sigh* So do Yellen’s remarks presage the ghost of the Fed’s future?

“After scrambling to hoard cash in the spring,” The Wall Street Journal reported yesterday “some large U.S. companies that halted their dividend payments are reversing their decision.

“Earlier this year, when much of the country’s economy shut down in the first waves of the coronavirus pandemic,” the article says, “companies withdrew cash from credit lines, stopped repurchasing stock and halted dividend payments amid the uncertainty.”

Although there’s been a resurgence of COVID-19 (are we in the second or third “wave”?) “many businesses… have learned how to operate during the pandemic.

“Retailers, fast-food restaurants and carmakers are doing better,” says WSJ, “and there is hope among executives that any new restrictions to battle the latest U.S. surge in cases won’t be as severe.”

Moody’s chief economist Mark Zandi adds: “The resumption of corporate dividend payments is an encouraging sign that executives believe that the pandemic will soon be behind us.”

“Income investors were hit with a one-two punch earlier this year,” Zach said.

“Many stocks traded lower as investors panicked,” he continued. “And several companies slashed their dividends as well.

“But… the tables are finally turning,” Zach noted. “Many of the best dividend stocks are steadily rebounding. This quarter, several great companies are starting to send dividends back out again.

“And as the dividend checks start flowing, investors are pouring capital back into these names,” Zach said.

His takeaway? “You’ve got a chance to tap into some great income payments while also growing your wealth as stock prices rise.”

We gonna do this again? Deutsche Bank continues to beat the drum for a work-from-home tax…

"Working from home will be part of the 'new normal' well after the pandemic has passed,” says DB research strategist Jim Reid in the bank’s report called What We Must Do to Rebuild.

“We argue that remote workers should pay a tax for the privilege," Mr. Reid concludes.

And doesn’t he just put the DB in DB? We’ll leave that to you, reader, to decipher. 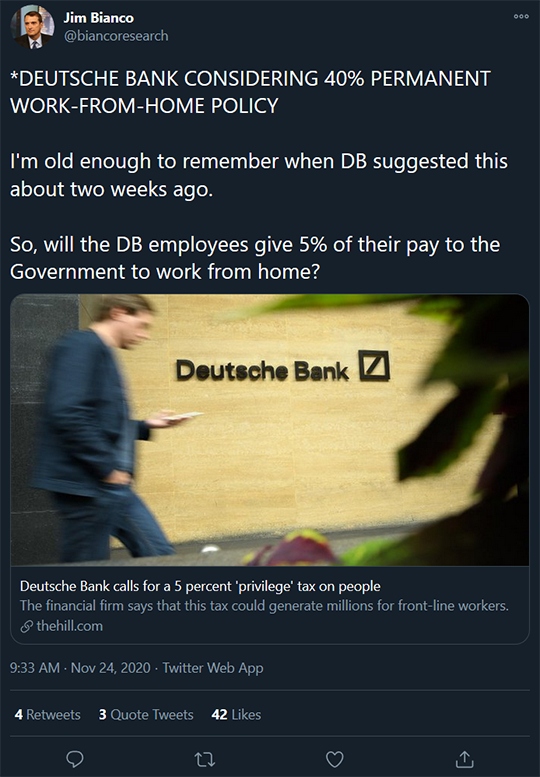 The proposal once again? “A 5% income tax for remote workers… justified primarily from the money saved between transportation and food, as well as the added flexibility working remotely creates.

“These additional funds could go toward covering costs for low-income workers who are obligated to come into a physical workplace.”

An article at The Hill says: “Deutsche Bank calculates that the average worker would not be any worse off by paying this tax because of the costs saved when working remotely.”

“As the Washington region braces for a Thanksgiving Day in the middle of a coronavirus surge,” the Washingtonian says, “one leading grocery store chain has some advice in its pre-holiday advertising.” 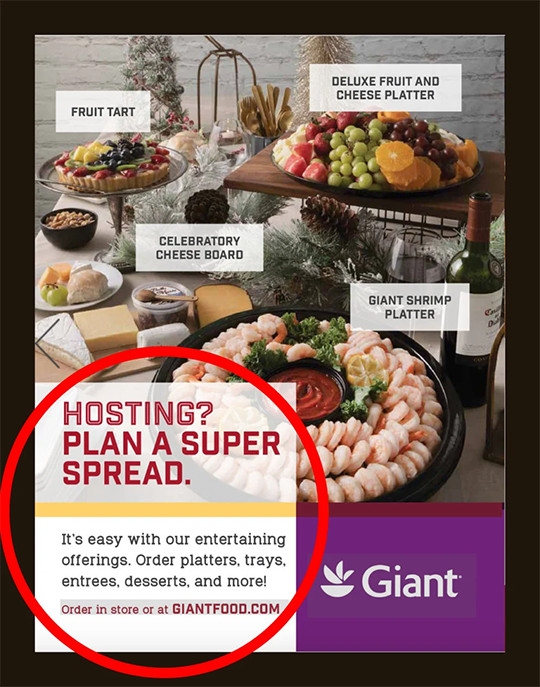 Yes, that’s the sound of a marketer getting canned…

The full-page ad appeared in Giant’s magazine Savory, which also included a recipe for Campbell’s green-bean casserole that’s sure to “slay the spread.”

The Washingtonian asked for a comment from the grocery store chain, and Giant obliged, saying: “We apologize for our advertisement in Savory which used the language Super Spread to describe an abundance of food… In hindsight, the choice of words was a poor one.”

Giant continues: “2020 has been exceptionally challenging for so many reasons… but we hope that food can still be a source of joy and comfort and that the ad reflects that spirit.”

Americans are definitely long on comfort food… “Pandemic 20” anyone?

“The media are quick to publish every legal failure of the Trump fraud allegations,” a reader says.

“Without evidence it is impossible to prove fraud. Absolutely correct.

“But the media are conveniently ignoring the most basic principle of evidentiary logic: ‘Absence of evidence is NOT evidence of absence.’”

Take care… we’ll be back tomorrow.

P.S. A COVID-19 vaccine isn’t the only thing on Ray’s mind these days…

“Have you seen what’s unfolding in the EV market the past 12 days?” he asks.

“This is the kind of market tech investors live for,” Ray says. “And it’s not over.”

So think of it as an early Christmas present to yourself… Now’s the time to act.