Gold for the People 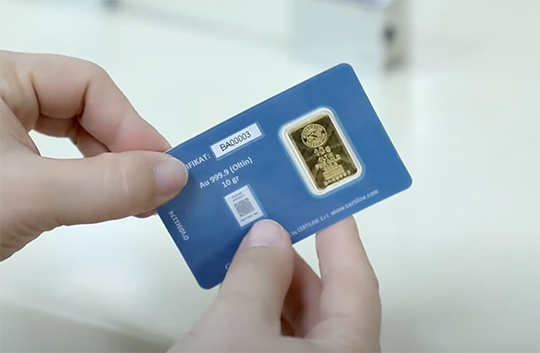 The CBU “aims to make gold accessible to more people as a savings instrument and for large payments,” explains the veteran gold market analyst Jan Nieuwenhuijs, writing at his Substack site.

➢ Interesting background: The last time Mr. Nieuwenhuijs appeared in our virtual pages was in 2017, when he was known by the pen name Koos Jansen. Using the Freedom of Information Act, he got the U.S. Mint to turn over 134 pages of records about its annual audits of the gold at Fort Knox. Alas, the documents only raised more questions than they answered…

“The new gold bars issued by CBU have a special protective packaging, which includes three security layers,” Nieuwenhuijs writes: “a unique serial number, a QR code for real-time digital authenticity verification and a membrane that changes color when broken.”

They come in weights of 5, 10, 20 and 50 grams. They’re available at 28 commercial bank locations throughout the country, and you can sell them back to the bank anytime — even if the seal is broken.

“In a way,” says Nieuwenhuijs, “the CBU gold bars can be seen as ‘coinage 2.0,’ because everyone can verify the authenticity of the gold by scanning the QR code, which enhances trust and acceptance of these bars. Although currently the bars will mainly function as a store of value in my opinion, due to the volatility of the gold price.”

Did he say “volatility”? Priced in dollars, that’s what gold has experienced big-time in the last month. 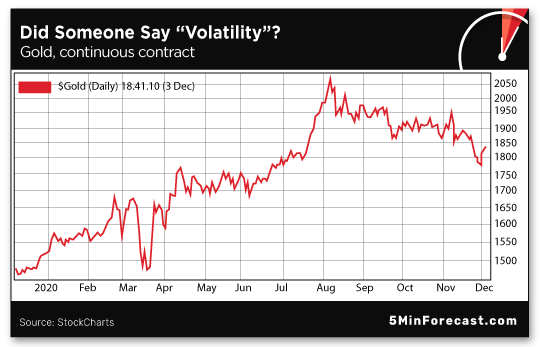 Longtime hands in the gold market are used to this. But folks who began dipping their toe into precious metals for the first time this year got quite the fright.

“There are four factors that contributed to the recent decline,” says our macroeconomics maven Jim Rickards. Jim joins us today to break down all four. More important, he’ll tell you whether they amount to a short-term blip… or if there’s cause for long-term concern.

“The first and most powerful factor is the rise in interest rates,” Jim says.

As you already know — and as gold-bashers are always keen to remind you — gold has no yield. Deep-pocketed investors seeking an income stream will naturally opt for U.S. Treasuries instead of gold — unless interest rates are extremely low. Then they’ll roll the dice on making capital gains in precious metals.

But rates have been rising steadily for more than two months. The yield on a 10-year T-note has leaped from 0.65% in late September to 0.98% this morning.

“The rate increase produced capital losses for existing T-note holders but also attracted a flood of capital from new buyers. Some of that capital moving to Treasury notes came at the expense of gold.”

Does this factor have staying power? No, says Jim.

For all the fluctuations in Treasury rates over the last decade, the overall trend has been down. “Every spike in rates was followed by a collapse. And each collapse took rates lower than the prior dip.

“The reason is clear. Every time the market sends rates up based on some narrative about inflation, growth or the ‘end of the bond bubble’ reality intrudes, a weak economy grows weaker and rates plunge again.”

With the “recovery” weakening — read on for our take on the November job numbers out this morning — Jim says the rate on a 10-year note will tumble even lower than this year’s record lows around 0.5%. “This will provide an enormous boost to gold prices.”

“The second factor contributing to gold’s recent decline is the election,” Jim continues.

Markets are settling into the comfortable narrative of divided government — a Biden presidency and a GOP-controlled Senate. “This meant that big new spending bills were on the way, and the worst excesses of the progressive wing of the Democratic Party would be sidelined,” he explains. “That scenario is nirvana for the stock market” — and makes gold’s safe-haven role less attractive.

And yet “markets are too complacent about the election outcome,” Jim contends.

He reminds us we still haven’t reached the “safe harbor” date of next Tuesday, Dec. 8 — when each state must settle on its slate of electors for the Electoral College.

And while extreme scenarios are unlikely — ummm, to wit… 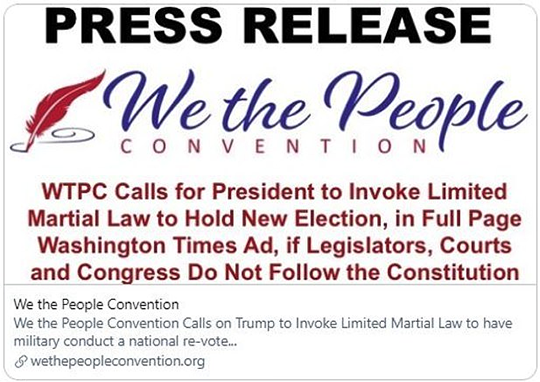 … Jim says until the Electoral College meets on Dec. 14, the statistical probability of Trump holding onto the presidency remains something greater than zero.

And even if Biden takes over come Jan. 20, a GOP Senate is no sure thing. Both of the runoff races in Georgia are tight… and if Democrats pull out victories in both, it’s a 50-50 balance of power in the Senate, with Kamala Harris the tiebreaker.

Any shock to Wall Street’s electoral complacency would give a lift to gold.

“The third factor is the approval of several COVID vaccines and new therapeutics,” Jim says.

“These developments supported the view that the pandemic would soon be behind us and a combination of business reopenings and pent-up demand would quickly restore strong growth and lower unemployment.”

A growing economy means rising interest rates and rising stock prices — both of which take the luster off gold.

But let’s get real about vaccines.

“Vaccines are coming,” says Jim, “but it will take six months to a year before enough people have received them to leave the pandemic behind. While the pandemic may fade, the economic damage will not.

“We are in a new great depression. The adverse effects will be intergenerational. Most of the small businesses closed will never reopen. Bankruptcies are skyrocketing. Job losses will be permanent. The disease is still raging and new lockdowns will produce a renewed recession.”

In other words, none of the factors that lifted gold from under $1,500 in March to over $2,000 in August will go away anytime soon.

Remember, the “gold price” as commonly reported is actually the price of Comex gold futures.

“Futures trading is automated and relies on algorithms that mimic other algorithms,” he explains. “The result is that when prices decline, more sell orders are triggered, momentum builds, stop loss levels are hit, leveraged players cover their losses with more sales and so on in a recursive dynamic that overshoots any sort of fundamental valuation based on money supply or economic predictive analytics.

“It’s just how leveraged automated markets work. Learn to live with it.”

But just as those algorithms smacked gold good and hard in the last week, Jim reminds us “momentum is a two-way street.

That’s how we got over $2,000 in August. Look at that chart again. We said back then gold was moving too far, too fast.

[Ed. note: As you might know, Jim recommends keeping 10% of your portfolio in physical gold.

If you’re already at that level, the next step is a well-chosen basket of gold mining stocks that can deliver outsized gains. That’s what Rickards’ Gold Speculator is all about.

Unlike many of our premium trading advisories, Rickards’ Gold Speculator is currently open to new subscribers — but only through this weekend.]

OK, about the weakening recovery: The monthly job numbers are a severe disappointment.

The wonks at the Bureau of Labor Statistics conjured only 245,000 new (or revived) jobs for November — less than half the “expert consensus” calling for 500,000. 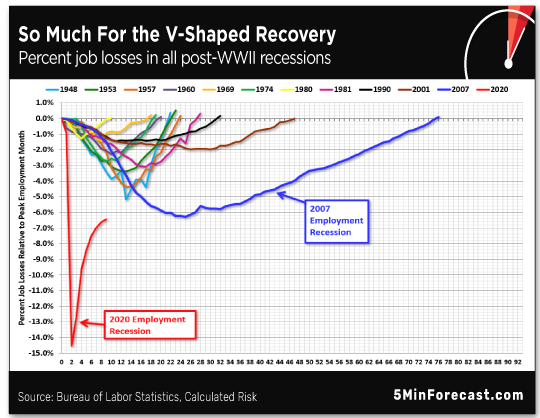 And yet the official unemployment rate fell from 6.9% to 6.7% — simply because so many people are giving up on finding a job and thus are no longer counted as part of the workforce.

You can see that in the labor force participation rate — the percentage of the workforce-age population that’s either working or looking for work. It fell last month to 61.5%. That’s a level on par with 1977.

The real-world unemployment rate — which accounts for all those people who’ve given up looking for work, along with part-timers who want to work full-time — sits at 26.3%. That’s unchanged from last month, per the calculations from John Williams at Shadow Government Statistics.

The stock market is shrugging off the job disappointment — perhaps on the theory the numbers will spur Congress to pass another “stimulus” measure before year-end.

Crude prices are settling down now that the OPEC nations and Russia have come to terms on a modest production increase going into 2021. At last check, a barrel of West Texas Intermediate is back above $46.

“Loved the report on Oakland, California's, move to ban natural gas in favor of electricity,” a reader writes.

“The best part was the mayor's quote that ‘Oakland’s national leadership to build cleaner, safer and healthier cities for all families continues with this historic transition to all-electric buildings.’

“Perhaps Mayor Libby Schaaf could have also made some other bold statements such as: California's national leadership to build an electrical grid rewards all families with frequent blackouts and brownouts and a power infrastructure so fragile it can result in some of the worst wildfires on record.

“I can't determine if California politicians' memories are so short they forget the potential downside of their proposals or if they are depending on even shorter memories in their constituents.

“Either way I don't need this kind of ‘national leadership.’”

The 5: Meanwhile, check out this chart from the Department of Energy showing where the Golden State gets its electricity. What’s the No. 1 source? Oh… 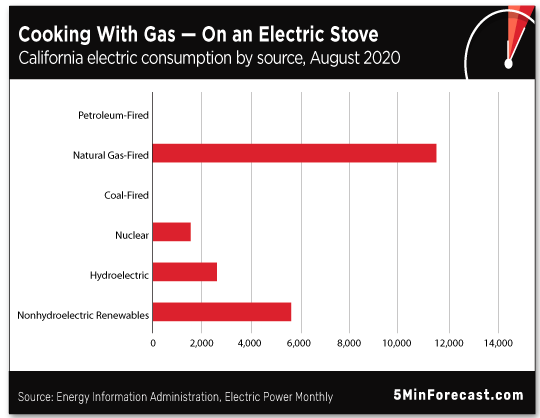 “I wouldn’t be too quick to $#!t on the PPP loan program,” writes a reader who practices law.

“Our company filed for a seven-digit PPP loan and, quite frankly, in the terror of the March global shutdown, that loan allowed us to keep many employees gainfully employed who would have otherwise been laid off or terminated during the fear and chaos.

“The balance of those PPP funds is still enabling us to keep employees we might otherwise risk not having on the payroll while we struggle to weather the subsequent recession we currently find ourselves in. I know many employers who share this experience.”

The 5: We’re not saying all PPP loan recipients are undeserving. Far from it.

But when government spins up a giant new program out of whole cloth, the likelihood of “waste, fraud and abuse” is even higher than usual.

And as one fellow said on a private Reddit board we belong to, the pandemic has brought forth a whole series of emergency measures that have transferred wealth from small and midsize businesses to big corporations… from the private sector to the public sector… and from the real economy to financial markets.

He sees a rare occurrence shaping up in the gold sector — something we haven’t seen in years.

Before you make any new moves in your portfolio, he urges you to check this out right away.