“This is a match made in heaven,” said Salesforce CEO Marc Benioff last week of his company’s $27.7 billion purchase of Slack Technologies.

“Together, Salesforce and Slack will shape the future of enterprise software and transform the way everyone works in the all-digital, work-from-anywhere world,” Mr. Benioff concluded.

And Slack CEO Stewart Butterfield was as enthusiastic as his future boss, tossing out words including vision… alignment… and agility. Ugh…

“Personally, I believe this is the most strategic combination in the history of software,” Mr. Butterfield rhapsodized, “and I can’t wait to get going.”

“Ultimately, Slack was ripe for the taking,” TechCrunch notes. “Entering 2020 it had lost around 40% of its value since it went public.

“Consider that after its most recent earnings report, the company lost 16% of its value, and before the Salesforce deal leaked, the company was worth only a few dollars per share more than its direct listing reference price.

“Toss in net losses of $147.6 million during the two quarters ending July 31, 2020, Slack’s uninspiring public valuation and its winding path to profitability and it was a sitting target for a takeover like this one.

“The only surprise here is the price,” TechCrunch says. And probably not in the way you’ve come to expect from mega tech deals: “The market priced the company somewhat effectively,” the article concludes. “Slack’s current valuation… is just over $25 billion.”

“Companies have had no choice but to rethink their business models in 2020,” Nomi says. “There was hesitation to follow through with deals that had already been on the table due to the pandemic, with muted M&A activity confined to just a few sectors.

“But with more certainty about the future — good or bad — CEOs and their investment bankers decided to re-examine deals that had been left on hold during the pandemic.”

And that re-examination led to action…

“September turned out to be a game changer,” Nomi says. “Deals announced during just that one month pushed overall global deal volume for the third quarter to more than $1 trillion.

“Most of those deals took place in the sectors considered best shielded from coronavirus effects,” Nomi notes, “such as the technology and health care sectors.”

Some of the biggest deals announced this fall, for example, bear that out: “AMD’s agreement to acquire Xilinx for $34.7 billion [and] Bristol Myers Squibb acquiring MyoKardia for $13.1 billion.” And, of course, Salesforce’s Slack buyout.

So what flipped the M&A switch in September?

“Frothy stock markets lead to merger-and-acquisition frenzies,” Nomi says. “As sure as fire follows smoke,” she says, “the number or volume of mergers and acquisitions increases when stock prices are high.”

Nomi continues: “Overvalued stocks can be used as super-cheap currency in an all-stock acquisition offer for a cash-generative business that happens to be trading at a much lower valuation.

“Companies [and their banking partners Goldman Sachs, Morgan Stanley, JP Morgan, etc.] are angling to close whatever they can before the end of the year,” Nomi says, “while share values remain high.”

“The fact the Fed has rendered money so cheap with its renewed zero interest rate policy (ZIRP) means these firms have more capital at a lower cost to play with,” Nomi says.

Not to mention “the wall of cash that hit the markets behind the scenes, as the Fed’s balance sheet tipped above the $7.2 trillion mark to hit its own new record,” she says. And “there was another nearly $30 billion worth of U.S. Treasury bond and note buying [by the Fed] that went uncovered by the mainstream media during Thanksgiving week.

“Along with news the Biden administration would seek to make former Federal Reserve Chairperson Janet Yellen the next Treasury secretary,” Nomi says, “Wall Street [got] a pre-holiday lift, including the Dow reaching 30,000 on Nov. 24.”

So “despite the record number of Americans hospitalized due to COVID-19, a subdued Thanksgiving holiday and rising concerns about… COVID-19 vaccine trial[s], November still turned out to be a stellar month for stocks.”

And “as we enter the final month of an incredibly tumultuous year,” Nomi says, “it seems that the market — for the time being anyway — has gotten out in front of the virus and the economy.” All thanks to the Fed, she concludes.

It’s spreading like wildfire on the internet… and Wall Street can’t be too happy about what Nomi reveals.

And if you have any money in the market at all — stocks, bonds, even a small retirement account — you’ll want to see this video now.

Indeed, every American should see how seriously the market is “rigged” in Wall Street’s — and the Fed’s — favor.]

“The Thanksgiving week breakout couldn’t be more clear,” says our market analyst Greg Guenthner. “After bumping up against resistance for almost three months, America’s tech index is blasting off to new all-time highs.

“A year-end melt-up is in full swing and traders are enjoying the spoils of the bull market,” Greg says. “The Nasdaq is now up more than 38% in 2020 – an amazing feat considering we’ve been stuck in the midst of a global pandemic for the past nine months… 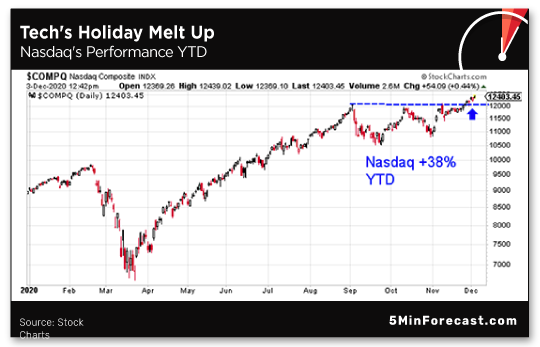 Greg says: “Right now, we’re enjoying a nice holiday lull in the news cycle mixed with some healthy optimism heading into 2021. But stocks won’t rise like this forever, of course.”

Greg’s takeaway? “This is a great opportunity for traders to remain aggressive, take profits and plan for additional market rotation as Christmas and the new year approach”

One example? “New Jersey is on track to become a northeastern pot powerhouse for more than just its 9 million residents after it legalized cannabis,” he says.

And the Garden State is just one of five states to legalize cannabis this year — either for medical or recreational use — or both — representing a market of 20 million people.

“More states are on the horizon,” Ray adds. “Texas, with a population of 29 million, could soon join the ranks of states that have at least legalized THC-bearing cannabis for medical purposes.”

“Vice President-elect Kamala Harris has doubled down on her intention to push for legalized marijuana at the federal level,” Ray says.

“She’s been a lead sponsor of the Marijuana Opportunity, Reinvestment and Expungement (MORE) Act during her time in the Senate, and she intends to be a national leader in her role as veep.”

And on Friday, the House of Representatives voted to repeal the federal ban on marijuana.

“The vote was 228-164, with five Republicans… joining 222 Democrats and Rep. Justin Amash (L–Mich.) in supporting the (MORE) Act,” Reason reports. The act “would remove cannabis from the Controlled Substances Act (CSA) and eliminate federal criminal penalties for cultivation, distribution and possession.”

Ray elaborates: “The law, if passed, would… tax sales at 5%, expunge cannabis-related convictions, grant access to small-business loans and invest in grant programs with an eye on ‘cannapreneurs’ from underserved communities,” he says.

Nevertheless, the MORE Act has a tough row to hoe in the Republican-controlled Senate where Majority Leader Mitch McConnell has thrown his support behind hemp but not its THC-laced cousin.

However: “Today’s vote is still a milestone in the fight against marijuana prohibition, and the House's endorsement of federal legalization may nudge President-elect Joe Biden to support less sweeping reforms that nevertheless go further than anything he has advocated so far,” Reason says.

“The writing is on the wall,” Ray says. “We are inching closer and closer to federal legalization.” In response: “Cannabis companies are scrambling to position themselves.”

This is messed up on so many levels: A “cash” giveaway in New Zealand ended in disappointment…

And people from around the country flocked to the site in hopes of scoring what the company billed as “actual money” falling from the sky.

Aaand… like the rest of 2020, the event turned into a train wreck: 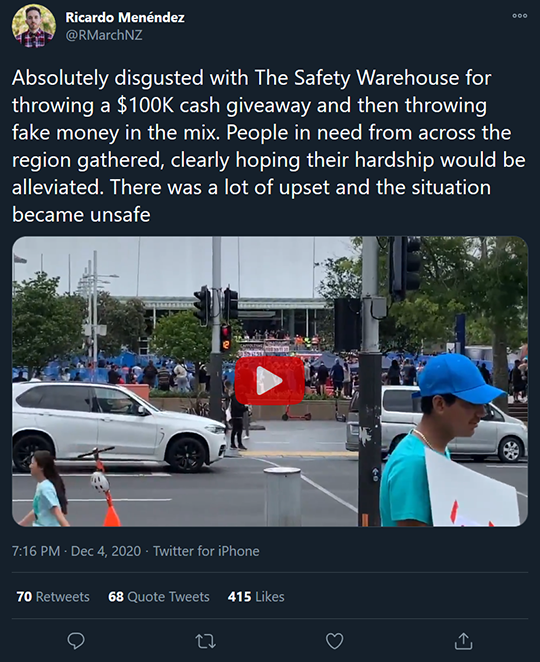 Instead of legal tender, the “cash” turned out to be 30%-off coupons for online orders at The Safety Warehouse, which sells — among other things — personal protection equipment (PPE).

“I was stomped on, when they were throwing the money I had a whole pile of people on top of me,” said Wayne Lynch, who spent NZ$120 on gas to attend the event… money he didn’t have to throw away.

“It wasn't like there were really rich people there,” said West Aucklander Rachael Santos. “We were all broke… that's the reason we were there.”

And the irony of the giveaway wasn’t lost on John Murphy, who spent NZ$200 and 10 hours of his life traveling to Auckland for The Safety Warehouse event.

“Scam the people and completely ignore your own safety advice,” he said.

But that’s only half the story. (Mark my words, this will SHOCK you.)

And no matter what you think of Biden or his other Cabinet picks, money LOVES certainty.

As one CEO puts it, “The markets love this appointment because being the former Federal Reserve chair, there’s no surprises about her thinking.”’

That’s why Nomi predicts many stocks could run even higher… But this situation is extremely urgent.

If you have any money in the market at all — stocks, bonds, even a small retirement account — I strongly recommend you see this before it’s too late.