“Papers, please.” The FDA’s emergency approvals of two COVID-19 vaccines in the last two weeks have power grabbers and trippers speculating how the rank and file will prove they’ve been vaccinated… or not. 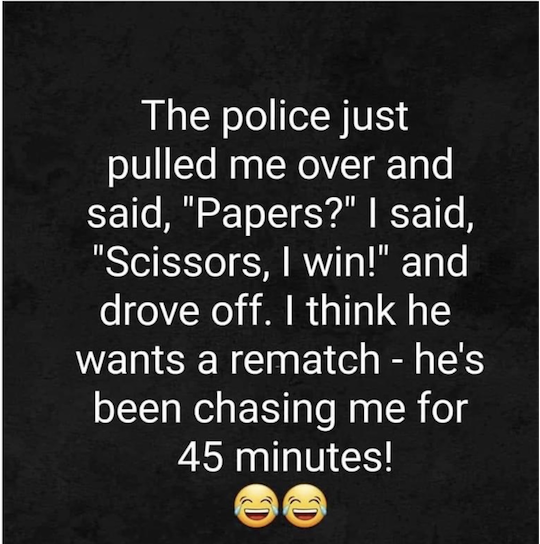 Not an option with digital credentials…

“In fact, some companies already have digital passport systems.” The company Clear, for example, has built its business on identity verification for airline passengers. Clear allows its 5 million subscribers — each pays $179 annually — to skip some security checkpoints by visiting a kiosk for a quick iris or fingerprint scan.

And you don’t need a CPA to figure Clear’s bottom line has been gouged by empty airports and wide-open TSA lines. So the company is doing what most are doing in 2020: pivoting.

To wit, “Clear is rolling out a Health Pass that logs testing or vaccination status,” the EEF says. “Ticketmaster,” for one, “has considered partnering with Clear.”

[A couple days ago, in a gesture of good faith, I bought concert tickets via Ticketmaster as a Christmas gift for my Dad. Shh! The event is scheduled in Philly on July 6. Hope springs eternal, right? But I’m not so sure I want my dad digitally frisked by the goon squad!]

“Such partnerships could lead to another intertwined network of unprecedented sharing of personal information,” the EEF concludes.

But companies that want to cash in on “digital passports” might be sh*t outta luck; the workaround for power trippers might be as close as your smartphone…

“Big Brother is in your pocket,” Jim Rickards says, “and he’s not leaving anytime soon.

“We all know the surveillance state is in full swing,” he continues. “Amazon tracks your online purchases. Google tracks your Gmail message traffic. Facebook knows more about you than your mother knows. Apple tracks your whereabouts using the GPS function on your iPhone.

“That’s all bad enough,” says Jim. “But what happens when you combine digital surveillance with pandemic dictatorship?”

Well, something akin to what’s happening in the Golden State…

Just over a week ago: “California residents started receiving push notifications on their smartphones prompting them to opt in to CA Notify,” CNBC reports.

The “system… can anonymously alert users that they may have been exposed to the COVID-19 coronavirus,” the article says. And we’re pushing back on “anonymously”…

“CA Notify is based on technology built by Apple and Google earlier this year called exposure notifications that uses Bluetooth to measure when people have been close to each other for extended periods of time, suggesting possible coronavirus transmission, without collecting personal information.”

The social engineers at two mega corporations have devised an app whereby they can play chaperone at a school dance… tsk-ing at us to leave room for the Holy Spirit. And taking names in the process. They really want us to believe they’re not mining personal data? C’mon!

“How would the system know when to send you an alert unless it knew your whereabouts and the whereabouts of others with COVID?” Jim asks. “That’s the point.”

According to CNBC, about 10% of Californians have opted in so far…

On the horizon in 2021? “When you go for your vaccine or a COVID test,” Jim suspects, “you’ll be required to download an app that identifies you either as immunized or infected.

“Your whereabouts will be tracked and you may be allowed entry or denied entry to certain events based on your infection status.

“Used aggressively, this will force everyone to get the vaccine or risk being ostracized from a social life,” he says. “Never mind that the vaccines are still basically experimental, despite getting FDA approval as ‘safe and effective.’”

Again, this seems apropos (and no, I’m not an anti-vaxxer)… 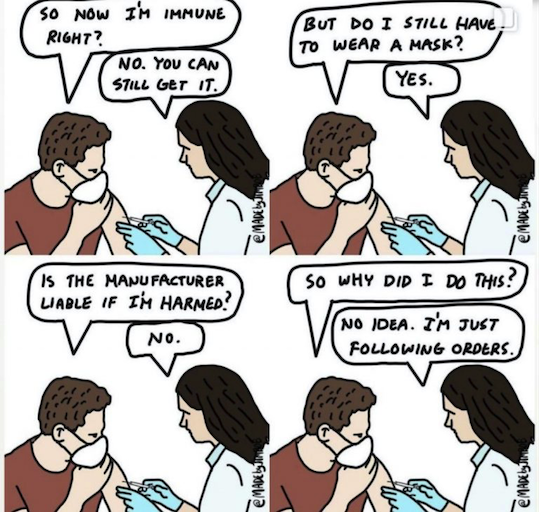 “The bottom line is that COVID is being weaponized to use vaccines and testing as channels to enhance what is already a massive surveillance state,” Jim says. “China does the same thing under the guise of a ‘social credit score.’

“You either get with the program and conform to government orders or you can expect to be marginalized when it comes to jobs, travel and getting your kids into top schools.

“The 21st-century dictators don’t need goon squads,” Jim concludes, with this parting shot: “There’s an app for that.”

[Ed. note: We’re three weeks away from the debut of Jim’s latest book, The New Great Depression: Winners and Losers in a Post-Pandemic World. Publication is set for Tuesday, Jan. 12.

Of course you can preorder a copy right now from a certain data-hungry tech behemoth that shall go unnamed. But if you sit tight for a few more days, you can order through us and get a few nifty extras thrown in. Watch this space.]

The MSM is blaming the market for not pricing in Congress’ latest stimulus package. Here’s the headline from CNBC: “S&P 500 Falls for a Third Day Even as Congress Passes Long-Awaited COVID Stimulus Deal.”

In other words, “C’mon, get goosed already!”

Our most in-depth treatment of easy riches via the Iraqi dinar was in 2013, but as best we can tell the scam dates back to 2009.

Journalist John Wasik — who zeroed in on the swindle — said at his Forbes blog: “The ruse is simple: Get dinar buyers to believe that the currency will be favorably revalued soon so they can sell their dinars at a huge profit.”

And Jim Rickards weighed in on the scheme in 2017: “Sadly, it appears to be a scam aimed at returning U.S. veterans of the war there and at other Americans.” He further highlighted the unique genius of the dinar scheme, involving real, physical Iraqi dinars you could keep in a foot locker or a safe-deposit box.

And like any good ruse, this one was built on a foundation of truth: The Iraqi government did, in fact, consider a revaluation of the dinar.

“The Central Bank of Iraq (CBI) has been attempting to delete three zeros from the Iraqi currency since 2003,” reported Middle East media conglomerate Al-Monitor.

But as one might expect, the path to the Iraqi dinar’s revaluation wasn’t trouble-free: “fears… mostly related to the lack of security, the presence of a market open to foreign commodities without any restrictions, the prevalence of counterfeit money in the market and rampant corruption in the country,” said Al-Monitor.

Just yesterday, our friend Chuck Butler — currency maven and editor of the long-running Daily Pfennig e-letter — shared this from Reuters over the weekend: “Iraq’s central bank increased the sale price of U.S. dollars to banks and currency exchanges to 1,460 dinars, from 1,182 dinars.”

“That’s a DEVALUATION, folks!” Chuck says, “Not a revaluation!” He’s not saying I told you so, but…

“Ten years ago”, he continues, “we would get calls from people all over the country asking us if we would sell them Iraqi dinar [because] they had read that it was going to be revalued.

“I instructed the people on the trade desk that we should gently break the news to the callers that there were no plans for a currency revalue.”

Now he says: “I wonder what all those folks that kept calling us and telling us the revaluation was real and was going to take place on ‘x-date’ are thinking now…

— We turn to our wealth-and-income specialist Zach Scheidt who asks: “Why is Tesla selling $5 billion in stock?

“That’s the question investors are asking Tesla CEO Elon Musk after this [month’s] announcement,” he says. To wit, on [Dec. 8] Tesla filed SEC paperwork to issue new shares and sell them on the open market… for a fetching $5 billion.

“Financial media channels have been speculating on what Tesla can do with this extra cash,” Zach says.

“But I haven’t heard much discussion about what’s really happening behind the scenes.

“Given the stock’s meteoric 800% rise [since March],” Zach says, “it makes sense to sell some shares and take advantage of the rally.

“Here’s how a transaction like this takes place: The company essentially creates new shares and sells them to new investors,” he says. “When this happens, existing shareholders then own a smaller percentage of the total number of shares.”

Zach continues: “Keep in mind, the company receives cash for the new shares it sells. And that cash can (and should) be put to use to help the company grow.

“Now, [to] figure out what the company is going to do with this extra cash…

“I expect Tesla to make several acquisitions in the next few months,” Zach says. “Acquisitions [that] can help Tesla compete in new markets.”

But Musk and company must strike while the iron’s hot: “The stock price is sharply higher right now; there’s no guarantee it will stay that way.

“By raising $5 billion from selling shares now,” says Zach, “Tesla will have plenty of options when negotiating the perfect buyout price for its new targets.” And Musk has said as much: “We’re trying to spend money at the fastest rate that we can possibly spend it and not waste it.”

Zach concludes with a word of caution: “To be clear,” he says, “I’m not suggesting you buy shares of TSLA right now. I think there’s simply too much risk of a pullback.

“[But] reading between the lines,” he says, “I’d say a buyout spree is right around the corner.”

Back to the latest stimulus package: This new bill is an absolute joke. First, when your average right-wing Republican can agree with AOC, something’s seriously amiss… 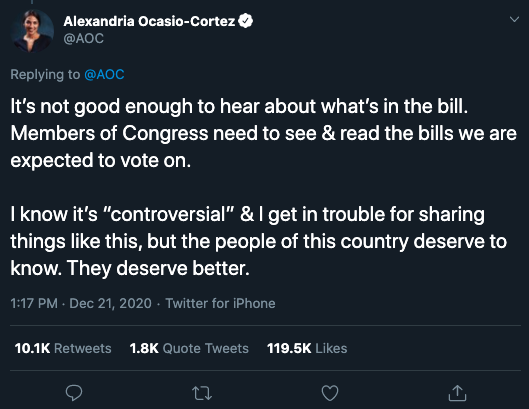 And you’ll never believe what porcine crap the Congress critters have included in the 5,500-page bill — a bill so unwieldy it’s equivalent to “basically read[ing] Infinite Jest five times over and then some in six hours,” notes Tara Golshan at HuffPost. Oy…

Infinite Jest indeed: “Beginning on page 5,099 of the [PDF file], the bill spends five pages laying out the process for determining who will be recognized as the next reincarnation of the Dalai Lama,” Raw Story says.

A farcical flourish worthy of David Foster Wallace himself…