“I love it when our projections quickly become reality,” says our resident futurist Robert Williams.

Two weeks ago, Bob stirred the pot here in The 5 when he declared that in a clash of premier nondollar assets — gold and Bitcoin — Bitcoin wins hands-down in an increasingly tech-driven world.

Around the same time, he made a prediction in our sister e-letter Technology Profits Daily: “Bitcoin is poised to break above $20,000 for the first time ever, with a slew of catalysts helping to drive its price even higher.”

Which it did six days later — and it hasn’t looked back. 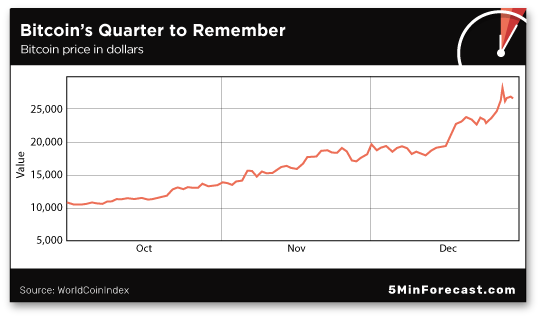 Bob reminds us that in its 12-year history, Bitcoin has achieved two milestones of “parity”…

Note the tempo here. It was roughly six years between milestones. And Bob believes the next one won’t take nearly as long to achieve. We’re looking at about four years — which means the next milestone is only weeks away now.

“So what’s next up for Bitcoin? Parity with the Dow Jones Industrial Average, which I believe could easily happen by Valentine’s Day,” Bob says.

“In order for me to be correct, assuming Dow/Bitcoin parity occurs around 31,000… Bitcoin would have to rise only 16% more by the time Cupid empties his quiver.

[We interrupt Bob long enough to check our screens: The Dow is inching higher into record territory at 30,423. Bitcoin is down 1.8% on the day at $26,556. Totally achievable.]

“See, Bitcoin is in the early stages of a second mania. Gazing back through history, it’s incredibly rare for a tradeable asset to experience a second mania over the course of a lifetime… let alone within a five-year period…

Yes, manias inevitably end in pain. But they can also last far longer than you expect.

Bob continues: “According to Bloomberg, ‘Bitcoin’s surge to record highs has investors racing for exposure to the rally — even if it means paying a high markup… the mania [has] pushed the price of the Bitwise 10 Crypto Index Fund as much as 650% above the value of its holdings.’”

Oh, and don’t forget how Elon Musk is fueling the mania.

Nine days ago, Musk tweeted a meme that’s a little too risqué for our PG-rated e-letter — alluding to the, ummm, temptations of Bitcoin. 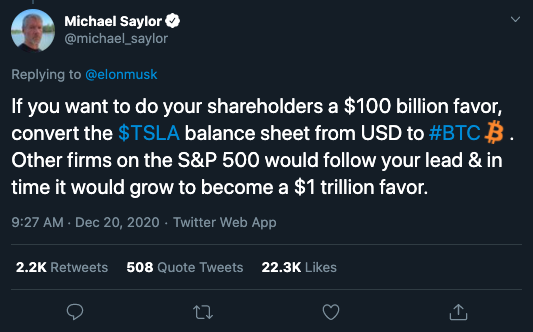 In turn, Musk said, “Are such large transactions even possible?”

Good question: At today’s price, Bitcoin’s market cap is a hair below $500 billion. But the fact Musk even raises the question only generates that much more buzz.

“But Coinbase’s IPO plan is the showstopper,” Bob submits.

“As the largest cryptocurrency exchange in the United States, Coinbase’s public offering has the potential to be the largest of next year.

“According to CNBC, ‘The company [Coinbase] announced that it has confidentially submitted a draft registration statement on Form S-1 with the Securities and Exchange Commission. The [form] is expected to go into effect after the SEC completes its review process.’”

Whenever Coinbase’s filing becomes available for review, Bob will examine it thoroughly. After all, the footnotes might reveal a partner company of Coinbase with growth potential even bigger than Bitcoin’s performance here in the fourth quarter.

In the meantime, Bob directs your attention to a subniche of the stock market that’s proven to generate the biggest gains you’ve seen in your lifetime.

This is a limited opportunity: We began the day with only 250 available slots for interested readers, and they’re filling fast. If you want to know more about how this tiny sector works and the huge gains to be had… best follow this link right away.

The major U.S. stock indexes are pausing for breath after they all closed at record highs yesterday.

The media narrative behind yesterday’s rally was the president caving and signing the pandemic relief bill he’d previously called a “disgrace.” After the close, the House took him up on his challenge to up the ante — increasing the $600 one-time checks to $2,000. Heck, why not? It’s not as if Uncle Sam has the money, y’know.

Per figures from the Financial Industry Regulatory Authority, investors had borrowed $722.1 billion against their investment portfolios up through last month. That exceeds the previous record of $668.9 billion set in May 2018.

The Wall Street Journal is among the crepe-hangers: “Chasing bigger gains, some [investors] have exposed themselves to potentially devastating losses.”

Which is true. But there’s an underlying assumption that doesn’t necessarily follow. We see it every time margin debt touches a record, and it goes like this: When investors borrow against the stock they own so they can buy more shares (or try their hand at options), it’s the sign of a euphoric “stocks can only go up” mentality… and a certain precursor to a crash.

Sounds great in theory, but the theory never pans out.

As we’ve pointed out in the past, the time to start worrying is when margin debt declines from all-time highs. And even then, we’ve seen several fake-outs over the past decade.

We don’t mean to gainsay the risks from investors borrowing against their shares. We’re just saying that record margin debt is not a sign that THE TOP IS IN!

We tipped you off to this auction a month ago: On Dec. 8, the Federal Communications Commission started taking bids on a slice of the radio-frequency spectrum ideal for 5G wireless.

The auction is still ongoing — taking a holiday break now, resuming next Monday. We won’t know who the winners are until the process is over, but we do know the bids already total $69.8 billion — way more than the $44.9 billion generated by a 4G auction in 2015.

So we know demand is intense: Verizon and AT&T are likely trying to one-up T-Mobile, now that the T-Mobile-Sprint merger is nearly a year old.

Before the bidding began, our science-and-wealth whiz Ray Blanco identified a company likely to gain big from the auction process to his Technology Profits Confidential readers. He says it’s still a buy — along with his other 5G-related picks.

Looking to raise a toast to say good riddance to 2020? There’s a tax for that.

“Traditional New Year’s Eve parties may be out this year,” writes Janelle Cammenga of the Tax Foundation, “but if your festivities still include popping a bottle of bubbly, the Champagne you toast with will be taxed.” 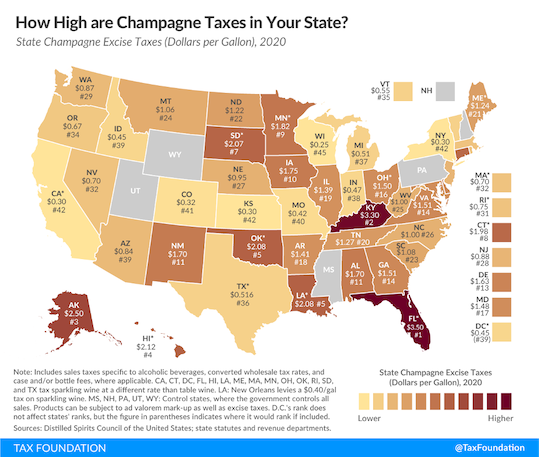 As was the case last year, Florida is tops in the country — at a rate of $3.50 per gallon. And we see No. 2 Kentucky raised its tax slightly compared with a year ago.

But last year’s No. 3 state, Minnesota, has lowered its Champagne tax considerably — from $2.72 a gallon to $1.82. Hmmm — was the competition from across the border in Wisconsin too much to bear?

Indeed, the Badger State is still lowest in the country at 25 cents per gallon.

One footnote: “Most states use the same excise tax rates for Champagne and table wine,” Cammenga writes, “but 14 have alternate rates for sparkling wine.”

Gotta wonder how they come up with those rules, right? Probably drinking something stronger than a little bubbly…

To the mailbag, and an email that arrived shortly before Christmas: “It’s time to remember the interesting definition Ronald Reagan supposedly gave of Santa Claus.

“Question: What is the difference between God and Santa Claus ?

“Answer: God is politically on the right and Santa Claus is on the left. But the problem is that Santa Claus doesn’t exist!

“Merry Christmas and thank you for all the great information you send all year long!”

The 5: At the risk of coming off like a grinch, we remind you Reagan did a pretty mean Santa Claus imitation — tripling the national debt over two terms. Dubya and Obama look like models of thrift by comparison, “only” doubling the debt on their respective watches.

“Thanks for explaining how the newsletters work,” a reader writes after we reprised our “Who We Are and What We’re All About” edition of The 5 yesterday.

“I subscribed to Rickards and started getting many other letters. Sometimes it’s overwhelming; but I do enjoy getting news from The 5 dished up with some laughs! I appreciate your unbiased opinions as I dive into investments for the first time in my life — due to COVID time, of course.”

“Thanks for the detailed explanation,” writes another. “I have really enjoyed your daily missives but complained about all the solicitations for additional paid products.

“Since I don’t (and won’t) do options nor short-term investments, most of what is sent to me is dispatched with haste. The rest is interesting to read for the analysis.

The 5: After a while, you’ll acclimate yourself to the sundry emails you get from us. You’ll know just at a glance — or even from the subject line — what’s informational and what’s commercial.

And if a certain sales pitch happens to break through your mental filter and grab your attention anyway, well, that means it speaks to you in a way the rest of them don’t.

“Thanks for ‘the freebie,’” says a third.

“Maybe it’s because I am sarcastic on most issues but I really appreciate the sarcasm aimed at Wall Street and Washington and sometimes individual states. It is almost always good to hear a different perspective on things happening around us.

“Let’s get one thing straight,” adds a fourth.

“I get a lot of newsletters, on different topics. While I like Seven Figure and my Laissez Faire books, I don’t enjoy them like I do The 5.

“While some I could give up, and others I would hate to, I would miss your take on things the most, I think. Keep up the good work. And don’t be so sensitive.”

The 5: What the hell do you mean by sensitive? Why I oughtta…

P.S. While we were writing, Bob Williams has filled several more slots for his beta test — where readers like you can check out a hidden and highly lucrative subniche of the stock market.

He’s looking for 250 readers total today. Follow this link to see if any slots are still available.