Tesla tops a ranking of the 100 best-performing companies of pandemic-plagued 2020. 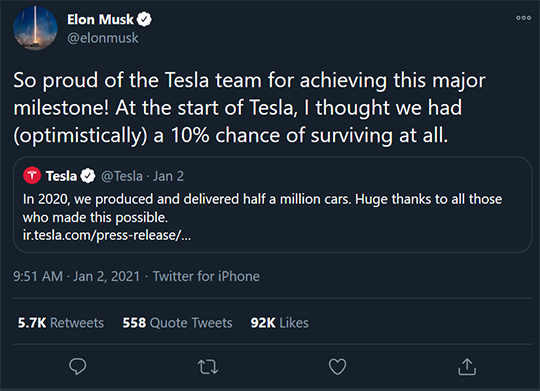 … with characteristic candor. Elon being Elon.

“The surge has made Tesla an extremely valuable company on paper,” he continues. More valuable, in fact, “than the next seven carmakers combined,” the FT reports.

For further perspective, Zach says: “The total market value for Ford Motor (F) is only about $35 billion. And larger rival General Motors (GM) is worth about $60 billion.

“Even though both of these car companies have been selling cars for many decades, their market values are only a fraction of what Tesla is worth!

“The premium value for Tesla only makes sense if you look at the bigger picture for this iconic company.”

Which is why we’ve invited Zach to join us for today’s edition of our team’s 2021 predictions.

“Investors believe that Tesla is much more than just a car company,” Zach explains. “[They] are paying up for what they believe will be a much larger enterprise — with products and services that go far beyond the company’s electric vehicles.

“But even Musk isn’t blind to the fact that the stock price could be vulnerable,” Zach says. In early December, Musk said as much in an employee memo, warning TSLA shares might get “crushed like a soufflé under a sledgehammer.” Really paints a picture.

“The communication was intended to urge the company’s rank and file… to keep the company’s technology and productivity moving forward,” says Zach.

“Meanwhile, Tesla took an additional step to lock in benefits from its sky-high stock price by selling $5 billion of new shares to investors.

“This helped to raise cash that will be available for Tesla to spend regardless of where the stock is trading in the year ahead.”

Zach notes: “This transaction tells us two things. One, Elon Musk is acutely aware of the business value of a surging stock price. And two, Tesla is willing to use its stock as currency to pay for future opportunities.

“I’m confident in the year ahead,” Zach predicts, “we’re going to see Tesla purchase other companies that will fuel growth in areas Tesla wants to expand into.”

In which case, he says: “You’ve got the perfect environment to make big overnight gains by investing in the companies that Tesla will be acquiring in the new year.”

“In short, it pays to be invested in companies that receive buyout offers,” Zach says. “But you have to own shares of the stock before the deal is announced.”

To wit, Zach and his team are working out which companies Tesla will target. “Given the recent surge for shares of TSLA and the urgency that Elon Musk has communicated to his employees,” Zach says, “we could be weeks away from the next buyout announcement.”

While we can’t give away which companies Zach’s keyed in on — that’s reserved for his paid subscribers — we will say Zach’s enthusiastic about tech companies in the ride-sharing, internet of things (IoT) and smart-grid industries. And Zach’s just a few weeks out from opening Buyout Millionaires Club to new members. We’ll keep you posted…

This might be a big ask, but as we turn our attention to the market today, analyst Greg Guenthner offers a word of advice: “Turn off the news!”

“There’s way too much attention on the virus, the Georgia runoff election, etc. All the financial journalists are looking for ‘reasons’ for yesterday’s drop.

“Ignore them,” Greg says. “We’re simply experiencing the normal ebb and flow of markets this week. Nothing more, nothing less.”

The three-year health care gambit Haven — that was fronted by Amazon, Berkshire Hathaway and JP Morgan — announced it will disband in February.

And The 5 pretty much called it at the start. We said in January 2018: “Maybe this mighty trio can pull it off. But there was something called the ‘Health Transformation Alliance’ a couple of years ago — a venture including the likes of IBM and American Express. It quickly surrendered to the health care cartel.”

According to Business Insider: “The venture struggled to get ideas off the ground and maintain buy-in from founding company Amazon.”

This according to a long interview with a purported Amazon insider who tells Logic magazine, “Jeff loves Prime Video because it gives him access to the social scene in LA and New York.

“He’s newly divorced and the richest man in the world. Prime Video is a loss leader for Jeff’s sex life.”

The major economic number of the day crushed expectations: December’s ISM Manufacturing Index shows PMI at 60.7 versus the 56.7 analysts’ expected, and that’s up 3.2 points from November’s reading. (Recall a number over 50 indicates expansion of the manufacturing segment of the economy.)

“The manufacturing economy continued its recovery in December,” says ISM chairman Timothy Fiore. “Survey Committee members reported that their companies and suppliers continue to operate in reconfigured factories, but absenteeism, short-term shutdowns to sanitize facilities and difficulties in returning and hiring workers are causing strains that are limiting manufacturing growth potential.

As bullish as this seems, we offer one caveat: This is soft data based on a survey. The better indicator will be industrial production numbers due in 10 more days. Absenteeism and short-term shutdowns, anyone?

For another take on Coinbase’s IPO, we turn to longtime Bitcoin investor and evangelist James Altucher.

“Cryptocurrency [has] been on fire in the fourth quarter (Q4), with industry leader Bitcoin repeatedly surpassing all-time highs in recent weeks,” he notes.

“However, some investors remain skeptical of buying and holding positions in Bitcoin. For some, the opportunity to invest in Bitcoin-adjacent investments — such as Square, PayPal and MicroStrategy — represents a more conservative approach to gaining exposure to the industry.

“Anticipation of the IPO… of the largest and most credible firm in the cryptocurrency industry… could push Bitcoin to new heights,” he says.

“For one thing, the crypto industry will — for the first time — have an opportunity to peek at the financials of one of the largest players in the space. We can expect these numbers to be absolutely breathtaking.”

And for investors not inclined to purchase Coinbase shares when it goes public, James says: “Bitcoin will serve as a proxy for its success. Investors will bet on Bitcoin in anticipation of a phenomenal IPO debut for Coinbase.

“Finally, the VC investors who currently own Coinbase shares will be able to sell shares for the first time, unleashing a whole new investment [outlet].

“Absent any setbacks during the IPO process,” James concludes, “I expect the Coinbase IPO will be one of 2021’s most anticipated offerings, and will push the price of Bitcoin to new records.”

Instead of putting business on ice because of Michigan’s pandemic shutdowns, a B-and-B and gastropub turned on a dime… 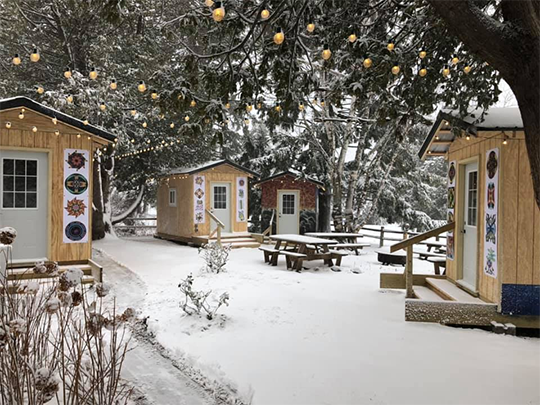 In order to survive, Northern Michigan’s Little Traverse Inn got, well, inn-ovative. So with a nod to Michigan’s culture — and at a cost of $25,000 — the business tricked out five ice shanties, each accommodating up to six guests.

“What’s more Northern Michigan than ice shanties?” asks owner and chef Graeme Leask. “Everybody we’ve had who has come and dined in them has thoroughly enjoyed it.

“I knew by the end of summer the writing was on the wall and we needed to come up with something,” he tells the NBC affiliate in Traverse City. “Fortunately, with the shanties open now we’ve managed to bring four people back to work.”

According to Mr. Graeme, the ice shanties are booked solid, and regardless of the course of the pandemic, he plans to use the ice shanties for many winters to come. In the summer? He’ll open the shanties to local artists to display their wares.

[Got a story of a business near you that’s gotten creative in order to survive? Drop us a line.]

“Yup, I’ve jumped on the Bitcoin bandwagon,” a reader writes, “but only because of the ‘better get in on the action’ herd mentality.

“I have read and considered volumes of Bitcoin apologetics, but my limited intellect can’t compute it all. I’m not so convinced, however, that Bitcoin has none of the true characteristics of money (store of value, medium of exchange, etc.).

“But I can’t escape the fact that Bitcoin is simply a series of electronic impulses. Other than a lot of creative gibberish, it looks as though Bitcoin rides the ‘it’s going up’ wave on steroids, but nobody really knows why because there is no why there.

“Get it while you can — just like the tulip trend, maybe? Ride the wave.”

Our reader might offer as good an explanation as any for riding the Bitcoin mania… I’m reminded of a friend who wanted to lay out $500 on the flagship crypto in its early days. His wife — ex-wife now — put the kibosh on the scheme. He kicks himself now…