“Considering the baggage we’re carrying over from 2020, this coming year might be another choppy one,” says Nomi Prins, former managing director at Goldman Sachs.

(Aaand… we’re already there, Nomi. Just a little over a week into the new year.)

But to Nomi’s point, flipping through 2020’s scrapbook, she notes, “the pandemic… all the shutdowns and restrictions and related anxieties… the election… the distortion between the real economy and the stock markets.”

Relative to that distortion, Nomi says: “At about the same time that the spread of COVID-19 was officially dubbed a global pandemic, the Federal Reserve revamped a policy it never quite abandoned since the financial crisis of 2008.

“Both ZIRP and QE were supposed to be emergency measures to counteract the disruption that the financial crisis of 2008 caused,” she says, “and as such, were supposed to have had a limited shelf life.”

“Those measures never really went away,” Nomi emphasizes. “They were merely touched up once the pandemic hit.” Notched up, more like…

Meaning the Fed mashed the buy button on Treasury bonds, mortgage bonds and — for the first time ever — corporate bonds in 2020.

The outcome? “Today, the Fed’s balance sheet is sitting at a record high of $7.2 trillion,” Nomi says. “That figure is $2.7 trillion more than where it was at the height of the financial crisis QE period. 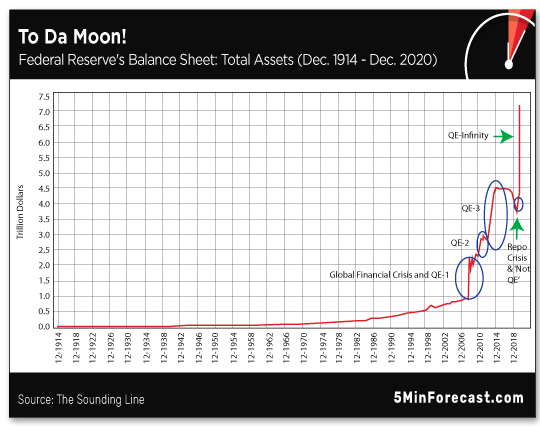 “Yet it’s likely the Fed isn’t done,” says Nomi, who believes “the Fed will expand its current $120 billion in bonds per month… by buying longer-dated bonds.”

In theory, “this would flatten the yield curve by making it cheaper to borrow for longer periods of time,” she says.

According to the Fed’s brain trust, “This action [should] reduce the cost of borrowing for consumers and small businesses,” in order to “get credit to expand or survive.”

Umm… not really. “The money the Fed created through ZIRP or by buying debt,” says Nomi, never made its way “into the real economy.

“So where did all this Fed-fabricated money really go?” Nomi asks.

“This doesn’t mean equities markets follow a straight line up,” she reminds. “There are moments of extreme volatility and sell-offs and sector rotations. But in general, the stock market has rebounded faster than the economy has.”

Here’s one reason why: “Large firms get more access to the Fed’s cheap money through their banking partners.” (emphasis ours)

For Wall Street (banks, corporations and even asset and fund managers), then, it’s been business as usual: “sponsoring IPOs as well as mergers and acquisitions” while using “share prices as currency.”

In other words, Wall Street withstood the pandemic’s seismic shocks that Main Street could not. Because of which…

“The pandemic increased the gap between the haves and have-nots,” says Nomi, “partly because it toppled the real economy.”

More than 25 million Americans are still out of work because of the pandemic, she notes, “increas[ing] inequality by taking jobs away from people who had the most to lose and the least amount of flexibility in terms of working from home.”

Especially hard-hit? Workers in the “travel, leisure, restaurant and tourism sectors that shut down or severely restrict[ed] their services” or laid-off “workers who were lower-paid to begin with,” Nomi says.

“Even if these sectors return, getting back to pre-COVID levels could take years.

Furthermore, the wealthiest 10% of stock market stakeholders own “87% of all stocks and mutual funds,” says Nomi.

Meaning, “stock market resilience went to the top.” Need proof? Last year from March 11 until June 11, “the total wealth of all the U.S. billionaires combined increased by over $637 billion to a total of $3.6 trillion.” Hooray?

Nomi concludes: “If money were spent on real economic growth, instead of being injected into the markets, it might actually decrease such inequality.” In other words, while Wall Street mainlines Fed funny money… Main Street bears the brunt of the pandemic’s real-world effects.

So even if you’ve weathered the pandemic, here’s why you should care: “Rising inequality,” Nomi says, “harms overall economic and social stability.”

[Ed. note: We didn’t vote for them… yet every decision these UNELECTED officials make goes virtually unchecked.

Catch Nomi’s message now — before it’s scrubbed from the internet at midnight — because you deserve the truth.]

This in reference to Tesla shares that climbed close to $900, making Elon Musk the new richest man in the world. *Shove over, Jeff Bezos.*

Greg says: “It certainly feels frothy out there… When you see a stock moving into extremely overbought territory and posting a chart that starts to look like a hockey stick,” he says, “you expect a sharp reversal to appear at some point as too many traders race for the exits with whatever profits they can carry.

“There’s nothing wrong with trying to play a stock that’s screaming higher. But it’s important that you learn to recognize the signs of a stock that’s gone vertical.

“If you aren’t in these plays for the long haul, it’s best to remain aggressive when taking profits. You’ll rarely nail the top — but you will save yourself a lot of pain (and money) by taking gains off the table early and often,” Greg advises.

“Eventually, the momentum crowd always abandons these sweetheart plays for the next hot ticket.”

That said, Tesla shares are down almost 5% today… while the Dow’s pared losses to just eight points, still hanging out above 31,000.

The S&P is likewise down eight points to 3,810; the tech-heavy Nasdaq’s the biggest loser today, with its market cap down a half percent to 13,100.

And Bitcoin’s getting rocked today, down almost 13% to $32,780. But that’s not to say the flagship crypto is down and out…

“Reviewing my trades from 2020,” says trading veteran Alan Knuckman, “one regret is not believing enough to buy into Bitcoin.”

This “despite the fact that all my trading experience pointed to a significant mania similar to the dot-com boom at the turn of the century.

“My mantra of trading anything, anytime, in any direction was derailed by liquidity limitations to controlling risk in Bitcoin,” he says.

“First, the required safety of trading on an exchange eliminating counterparty risk was only recently eliminated with CME Group futures,” says Alan. “Also, the mostly no shorting rule by brokers and option inefficiency held me back.”

But Alan takes things in stride: “Missing out on crypto didn’t cost any money,” he says. “Instead of forcing myself into a market gamble, trade for tomorrow… future days will always offer more opportunities

JP Morgan, Chase and Citigroup — along with Blue Cross Blue Shield — vowed to stop the money pipeline to D.C. for several months. And the message to politicians on both sides of the aisle is loud and clear: Corporate money is off the table until there’s a peaceful transition of power. Of course, the message to consumers is a lot more altruistic than that…

To wit, Peter Scher — JPMorgan’s head of corporate responsibility — had this to say: “The focus of business leaders, political leaders, civic leaders right now should be on governing and getting help to those who desperately need it most right now.”

Mr. Scher then let this nugget slip: “There will be plenty of time for campaigning later.”

Wait, we haven’t even installed the president-elect… and big banks and health care are already thinking about how they can influence the next election? Chilling…

United Van Lines released its 44th-annual national migration study, which shows the pandemic’s revved-up moves to the west and south.

And for the third year in a row, the Garden State tops the list of states that residents (apparently) love to hate, with 70% of moves being outbound… 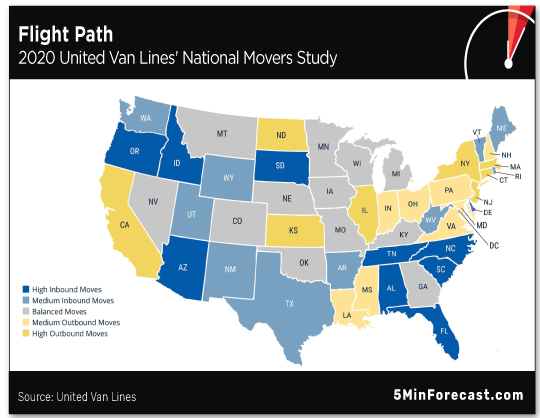 [Arizona pulled a fast one on the state’s newcomers with the passage of Proposition 208 in November. Arizona’s “top income tax rate was the 13th lowest in the nation,” Chamber Business News says. “Now economists calculate the state has the ninth-highest rate in the U.S.

“While the new tax is meant to tax the wealthy to help fund education, it has an unintended consequence: It will affect tens of thousands of small businesses as well.”

New residents? Don’t get too comfortable… ]

A couple interesting factoids from the study reveal 40% of Americans cited a “new job or job transfer” as the reason for decamping while more than a quarter said they wanted to be closer to family — “significantly up over prior years,” the survey says.

“My guess is ONE motivation for the thousands who showed up in D.C. (not the thugs who broke into the Capitol to get their 15-minutes of fame) is disdain for the elitist ruling class.

“This includes people in politics and other segments of society who believe they’re acquainted with the lives of working-class Americans. The irony, of course, is that — with few exceptions — these elitists are completely detached from reality.

“We might be in for a ride if this ‘We’re not gonna take it anymore’ attitude finds firm footing.”

The 5: Nomi said as much today when she noted the link between economic disparity and social unrest. Firm footing found…

Per Saturday’s issue that touched on SALT caps, a reader says: “Just wanted to point out that for people living in the San Francisco Bay Area, a ‘starter home’ runs close to $1 million.

“Middle-class people depend on the SALT deduction to be able to afford the monthly payment on even the most modest home.

“That Bloomberg quote makes it sound as if only the uber-wealthy would benefit from reinstalling that tax break, but that’s misleading.”

The 5: No wonder folks are fleeing California. One million dollars for a starter home?! Really puts the accent on “mort” in mortgage.

And yes, we agree: everyday Americans living in high-property-tax states would benefit from repealing SALT caps. Not just gazillionaires.

That said, the rub for Dem grandstanders is the optics of repealing the $10,000 SALT cap that appears to benefit their bicoastal donors.

Take care. We’ll be back tomorrow…

P.S. Nomi Prins is convinced this is the No. 1 threat to your money right now…

It’s actually far more concerning… So concerning, Nomi says: “If you have any money in the markets, you’ll want to watch this video.”

Hear Nomi out… before her revelation is removed from the internet at MIDNIGHT.