The 5 first reported Mr. Howe’s comments around the same time — more than a month before a new variant of COVID-19 came to light in the U.K. Since that time, other strains have popped up in South Africa, Nigeria and, just yesterday, Ohio.

According to Live Science: “Two new COVID-19 variants have been found in Ohio, and they appear to have originated in the United States…

“One of these variants, dubbed the ‘Columbus strain,’ has three gene mutations that haven’t previously been seen together in SARS-CoV-2, the virus that causes COVID-19, according to a statement from The Ohio State University Wexner Medical Center.”

Which led to this jokey Fark headline…

Just scratching for a bit of levity, folks…

The CDC maintains the new strains “spread more easily and quickly” but “currently, there is no evidence that [they cause] more severe illness or increased risk of death.”

“[COVID-19] doesn’t want to kill us,” Howe said in November. “Frankly it prefers if we don’t die, it just wants to survive.” *gulp*

As the virus mutates to survive, questions arise about the efficacy of the three main vaccines that have already been approved.

Last week, an early study found “the immunity conferred by the Pfizer-BioNTech vaccine could block a version of the virus that contained one key mutation among the ensemble of changes found in both the U.K. and South Africa variants,” The Washington Post reports. (We repeat: early study — meaning not yet peer-reviewed, and only tested against one new COVID-19 strain.)

As for the other vaccine approved in the U.S. — which uses technology similar to Pfizer-BioNTech’s — Moderna’s CEO Stéphane Bancel says: “MRNA is fantastic because you can just swap a new strain and run with it.” We’ll just have to take his word for it?

And for the Oxford-AstraZeneca vaccine, approved in the U.K., it “could take as little as a couple of days to devise a new formulation for the adenovirus-based… but much longer to produce,” according to The Financial Times.

Ultimately, the facts about how well current vaccines protect against new COVID-19 strains are murky, at best…

“Now we know: A variant can emerge in a population and become dominant in a matter of weeks or months,” he says.

Which calls to mind something Dr. Margaret Liu of the International Society for Vaccines said in November: “Just by sheer numbers, we probably need multiple, multiple vaccines. It may be that the second one or the 50th one is actually a better vaccine.”

More specifically, Ray’s been following the development of a DNA-driven vaccine that’s stable at room temperature for up to a year or can be refrigerated for up to five years — this in contrast to the ultra-cold storage needed for the Pfizer-BioNTech and Moderna vaccines.

No, this new vaccine isn’t days away from distribution; it’s still in Phase 2 trials. But this company’s researchers have a distinct advantage over some other vaccine researchers: the ability to test against multiple strains of COVID-19. Something approved vaccines — and even vaccines in late-stage clinical trials — will have to backtrack in order to do.

This unique opportunity, alongside Ray’s exhaustive research, has led him to conclude this company has the inside track to be one of the best vaccines — even though it’s not first. One might even argue because it’s not first.

Paying subscribers to Ray’s entry-level newsletter Technology Profits Confidential already know the name of the company we’re talking about; out of respect for them, we’ll withhold it today. Of course, you can join their ranks and get immediate access to bleeding-edge technology research for less than the price of your monthly cable bill.

Delta Air Lines (DAL) was among the first companies to report Q4 2020 earnings this morning… and they were (shocker) disappointing. The company reported a miss for earnings per share, abysmal revenue and half-empty planes. No matter. DAL shares are up 4% today; good on Zach Scheidt who, on Tuesday, recommended buying DAL ahead of earnings.

Are we going to see a repeat of 2020’s precious metal shortage? This week, rumors surfaced that the U.S. Mint has already notified its authorized purchasers that Gold Eagles and Buffaloes are currently sold out, and there’s no indication when more will be available.

To confirm or deny the rumors, The 5 reached out to Alex Daley, president of Hard Assets Alliance, who says: “Your rumors are accurate.

“We have multiple dealers reporting that the Mint is out, and they do not know when allocation will be increased for 2021 coins.

“We also don’t make distinctions between coin years,” he continues. “When you order an American Gold Eagle from us, you are going to get whichever coin is available cheapest and fastest. Unless you are speculating on a coin’s collectible value, to the overwhelming majority of investors, the year of the coin makes little difference.

“There is ample secondary market supply of Gold Eagles until the Mint ramps back up,” he says. “If that changes, it’ll be automatically reflected in premium prices, and those who did invest early in such shortages may be rewarded with a small premium bump. But for most investors, that temporary bump of a few dollars is not the point of the investment.

“Gold is a long-term hedge against inflation and market volatility,” Daley concludes. “We’ve got plenty of that ahead.”

[Ed. note: Because of its vast network of wholesalers, HAA is a model of liquidity. Plus, it only takes minutes to set up an account to buy — and store, if you choose — gold, silver, platinum and palladium in a secure, private vault.

Explore Hard Assets Alliance’s easy-to-navigate website today, or if you prefer, you can call their toll-free phone number. As always, our firm purchased a stake in Hard Assets Alliance, so we get a cut of the fees. But that’s how convinced we are HAA accommodates everyday investors looking for some inflation prevention.]

First-time jobless claims surged to 965,000 for the week ending Jan. 9 — a number not seen since August. 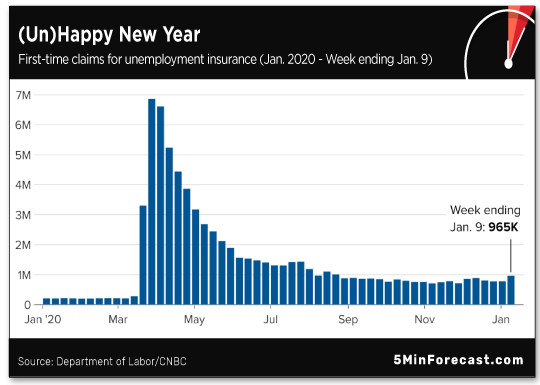 And it doesn’t take a rocket surgeon (heh) to figure most unemployment claims came from states with severe pandemic restrictions; in something of a surprise, unemployment ticked up in Florida and Texas too.

But never fear: “The decline in economic activity is expected to be met with more stimulus from Washington,” CNBC concludes. “President-elect Joe Biden later Thursday is announcing his hopes for another package likely in excess of $1 trillion.”

Not exactly spine-tingling, but… “That’s impressive, given the fact that many high-profile dividend payers suspended their dividends when the coronavirus crisis first hit.”

All things considered, “a 0.7% raise isn’t much to celebrate,” says Zach. “But it’s certainly encouraging to see some income increase.” Particularly when the financial media were predicting a dividend apocalypse in 2020.

“Looking ahead in 2021,” Zach says, “I expect a much bigger increase in dividends for retirees.

“Many of the companies that suspended their dividends last year have already reinstated them,” he notes. “In some cases, the companies have begun paying a fraction of the dividend they used to. But as business picks back up, those dividends should once again reach their previous levels.”

Zach notes: “It’s a healthy sign that management teams are confident enough to send cash to investors, knowing that their businesses are now stable enough to stop hoarding cash.”

Banks too have gotten the greenlight to start paying dividends to investors again. “Dividend stocks like Bank of America Corp. (BAC) will soon offer investors more income for every dollar invested.

“If you’re invested in [dividend] stocks ahead of time,” Zach says, “you’ll benefit from the higher payments and more wealth as the stock values rise.

“Bottom line: 2021 is a great time to be an income investor,” he says. “And growing a balanced portfolio of income stocks is one of the best ways I know to consistently build your wealth.”

“Half the people aren’t going to agree with you no matter what you say. Everything you are and believe (confirmation bias) goes into interpreting what you read. If you read The 5 as a ‘far-right’ rag, you got it. If you want it to be a flaming liberal parrot-cage liner, you’ve got that too.

“Politics do matter when making financial decisions. So keep your agenda in check, and read as it’s written.

“And if you have any spare time, check out The Babylon Bee.

“Life’s too short. Keep up the good work.”

Thanks for the chuckle… Take care, and we’ll be back tomorrow.

P.S. Think of physical precious metals as a barrier between your wealth and economic turbulence…

Learn how — with a single click — you can buy and store allocated gold… silver… platinum… and palladium in your choice of six audited vaults worldwide. Follow this link to set up an account.

Again, we note: Agora Financial purchased a stake in the Hard Assets Alliance, so yes, we’ll get a cut of the fees (again, among the industry’s lowest). But we wouldn’t have made the investment if we weren’t thoroughly impressed by what Hard Assets Alliance does for everyday folks who want exposure to precious metals. One more time, here’s the link.