On the surface, it sounds like a surefire sell signal: “Shares In Emerging Markets Have Hit a Record Peak,” says The Economist.

But “new all-time highs” have a funny way of going much higher. And as it happens, traders are piling into call options on EEM, the ETF based on that index.

That’s according to a new report from Susquehanna Financial Group. Emerging markets are the beneficiary of a move away from pricey technology shares toward “long-term underperformers,” as a Susquehanna research note puts it.

Just looking at the chart action, EEM is one of two high-confidence longer-term trades in early 2021 — per our chart hound Greg Guenthner.

Usually Greg’s time horizon is a lot shorter — for instance, his Weekly Fortune Alliance readers bagged 85% yesterday on Virgin Galactic (SPCE) in just 24 hours — but when we asked him to contribute to our team’s 2021 forecasts, he obliged with two ETFs for your consideration.

Here’s his annotated chart of EEM… 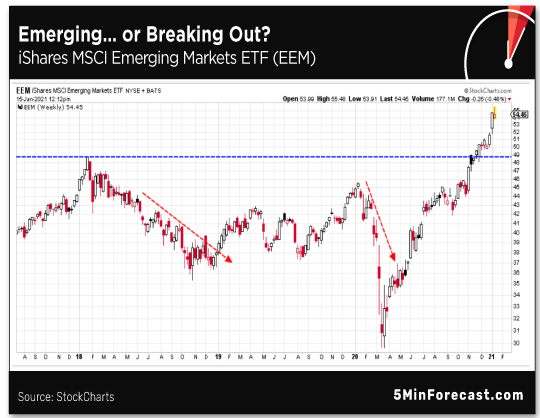 “If U.S. stocks are indeed too frothy,” he says, “perhaps money moves overseas” — which lines up exactly with the Susquehanna analysis.

Biotech experienced a monster run-up coming out of the 2007–09 financial crisis. But for the last five years, the sector went nowhere.

Now? With corona-vaccines coming to market, biotech is getting a booster shot… 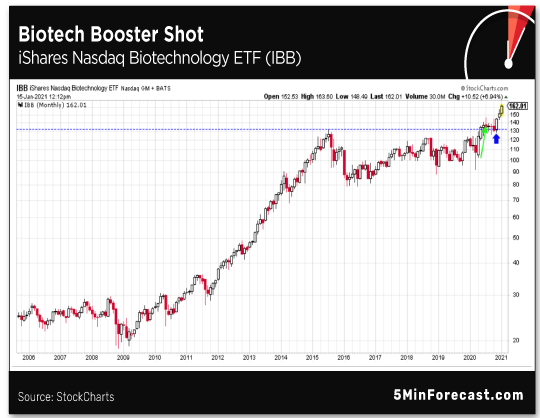 Along with emerging markets, biotech stands to be one of the big beneficiaries of a rotation out of the FAANG stocks and other trendy tech names. “Tech is frothy,” says Greg. “Biotech gets the baton and runs here.”

[Ed. note: Again, these are two longer-term trades that Greg humored us with when we asked him for his 2021 forecasts. Usually his time horizon is a lot shorter — to wit, the 85% his readers collected yesterday on SPCE in only 24 hours.

And in the event of a new market crash… his strategy’s got you covered there too. See how it performed both during and after the corona-crash last year.]

When he launched his entry-level newsletter Future Wealth last April, Facebook was one of his seven introductory picks — mostly as a play on big data and artificial intelligence.

In the nine months since, it’s jumped about 40% — nice, although not nearly as good as some of his other picks.

After the feds and several states sued FB about a month ago, Bob advised holding on. But the fallout from the “deplatforming” of Donald Trump is the final straw. Facebook started the week at $267 a share; as we write this morning, it’s below $250.

Not that they’re going to collapse, but “I believe all five stocks have lost a bit of their luster… and thus will lag shares of other highflying technology companies over the next three–six months.”

“Between people taking social media diets and all the antitrust suits that the big names face, they can’t continue going straight up. Smaller techs, on the other hand, have a lot to look forward to. In fact, there are some sectors in tech that could be big wins in 2021.”

Like semiconductors: “There is a global chip shortage right now — it’s a big deal. Everything that uses chips is affected, even the smartphone you may be reading this email on.

“It’s very bullish for chipmakers and companies that support chipmakers. The shortage will allow chipmakers to charge a premium for their chips and facilitate infrastructure to make more chips faster.”

Already, the VanEck Vectors Semiconductor ETF (SMH) is up 62% in the last 12 months. “There are a number of chip companies I have my eye on right now.”

To the markets today — where it’s “risk-off.” Alas, gold is not benefiting.

Scared money is piling into Treasuries, pushing prices up and yields down. As we write, the yield on a 10-year note is back below 1.1%.

The $1.9 trillion “stimulus” proposal from the incoming president, revealed after the close yesterday, was no surprise. What was a surprise was his talk about companies and wealthy individuals paying their “fair share” of taxes — only a couple of days after Team Biden floated a story that tax increases were off the table until at least later this year.

No telling if that’s the catalyst for the selling, but it’s as credible as anything else we’re seeing.

Or maybe it’s the day’s economic numbers: It seems producers are producing but consumers aren’t consuming.

The Federal Reserve issued its December industrial production numbers this morning — up 1.6%, way more than expected.

And of that number’s three components — manufacturing, mining and utilities — it was manufacturing doing the heavy lifting, up 0.9%. That’s also way more than expected. Still, manufacturing output remains 2.4% below the pre-pandemic month of February.

But on the consumer side? Holidays notwithstanding, the Commerce Department says retail sales tumbled 0.7% between November and December. The “expert consensus” among dozens of economists polled by Econoday called for a drop of only 0.1%.

If you throw out auto sales (which were strong) and gasoline sales (artificially goosed by rising prices), the numbers are much worse — down 2.1%.

So concludes a report from the U.S.-China Business Council — which represents U.S. companies doing business in the Middle Kingdom.

Obviously with a name like that, the group has an ax to grind. But the figures ring true. Bush 43’s steel tariffs in the early 2000s saved 3,500 steel jobs — but destroyed tens of thousands of jobs in industries reliant on cheap, imported steel.

In a related own-goal, it appears the impending ban on Americans investing in about three dozen Chinese companies is… having zero impact on those companies.

Effective last Monday, Americans could no longer buy shares in those firms, on the theory that they’re fronts for the Chinese military. Existing positions have to be unwound by November.

Result? “Asian and European investors are snatching up discounted Chinese stocks hit by a U.S. investment ban,” says the Reuters newswire, “finding bargains as giant American funds bail out and shrugging off concerns that the sanctions could hurt the companies’ prospects.”

The strongest buying appears to be by mainland Chinese — whether out of patriotism or plain ol’ bargain-hunting. But in Europe, the Swiss investment bank UBS reports client interest too.

Among other names that are rallying, the oil giant CNOOC is up 16% this week alone.

To the mailbag: “Wow, reading the comments being sent to you, people get butt-hurt really easily these days if they even suspect or misinterpret that someone doesn’t hold their exact same political views!

“Sorry you have to deal with those fragile-minded people, and please keep up the great work!”

“I have a few thoughts about your recent reader feedback:

1. They are trolls. They are just replying to be annoying. My evidence: Their accusations are ridiculous in the light of all that you write in The 5.

2. They are victims of a far-left echo chamber. They have convinced themselves that anybody not in their camp must worship Mr. Trump. I personally find this an odd position, as even within the Republican Party many did not and do not support him, yet are still not left-wing. This is similar to how there are divisions in the Democratic Party, with some on the Bernie Sanders side and others more on the Joe Biden side.

3. They have no logical defense for their views and must resort to angry rhetoric and diatribes in the hope of intimidating you into change.

4. They replied to the wrong publication.

5. They accessed their email on a public computer, stayed logged in and somebody else randomly replied with vitriol.

“For me personally? I find that most financial newsletters have a mix of libertarian, right-wing and left-wing ideas. I read them all. And I agree and disagree with particular ideas or viewpoints. But I find benefit in listening. Intolerance of a different view strikes me as the product of a fearful mind. But neither a different view, nor intolerance of others’ ideas, makes one an enemy.

“And let’s face it: the whole field of economics is pretty new, and not yet thoroughly understood, having suffered from much politicization its entire life.

“End of ramble. As always, thanks for your newsletter. It’s always an interesting read!”

“I’ve been reading publications from Agora for quite a while now (The 5 has always been my favorite) and always get a kick when certain criticisms appear like clockwork.

“There are the new readers who complain this isn’t what I paid for — we started this year out with that one. Then there are always the people who complain you’re too far right. Seems popular lately. I don’t feel like you get blamed for being too far left very often, if at all. I love when you refer past writings to the people who complain because you usually have the ammo to set them straight.

“Even though I think you might lean right in your personal views, I’ve always felt you do a great job presenting whatever topic as neutrally as possible. I’m in my middle fifties now and came to the conclusion long ago that neither side is ever going to do much good for the people. I wish everyone would come to this conclusion. Then maybe we could focus on making more money without much political garbage!

“I’ve learned so much about the economy, investing, history and politics from your publications that I just want to say Thank You! Long live The 5.”

“Dave and Emily, thanks for your daily missives. I for one look forward to what you have to say. Don’t agree with everything, however, respect your ability to call it as you see it.

The 5: We’ve mentioned it in passing once or twice, but we’re saddened by how politics has become the vehicle through which millions of Americans have come to find meaning in their lives.

Matt Taibbi elaborated this morning in a post to his paying readers on Substack: “There was a time when opinions on national politics were way down the list of what most people considered most important about themselves. In online America, that’s gone.

“Unhappy people are made more unhappy. Potential respites in the form of family, community and alternative perspectives are demonized as people sink deeper into cultlike bubbles. If we could just unplug, we’d recover. But we don’t know how.”

P.S. If you have any concerns at all about an approaching stock market crash, it’s essential you take a look at this.