“The year 1971 was the start of the ﬁrst global ‘money printing.’ Today, the entire global banking system runs on printed money.”

As you might already know, 1971 is the year the dollar’s last tie to gold was severed. This August will mark the 50th anniversary of President Nixon crossing a monetary Rubicon.

To illustrate Mr. Kiyosaki’s point about “causing poverty for those who work for money”… we present the following chart from the Center on Budget and Policy Priorities. The arrow was helpfully added by the keeper of a website called WTF Happened in 1971. 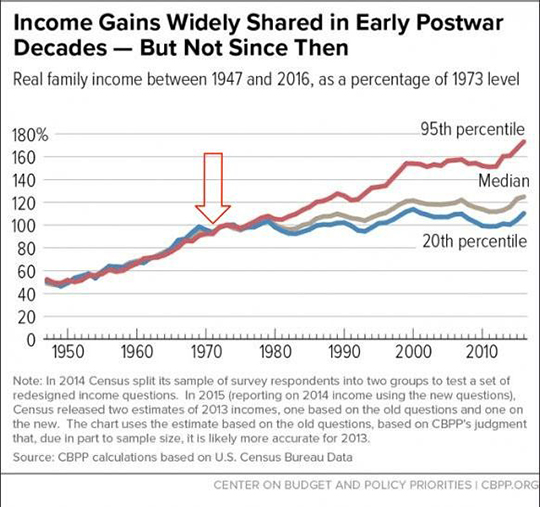 And the money printer is about to go “brrrr” at even higher speeds. 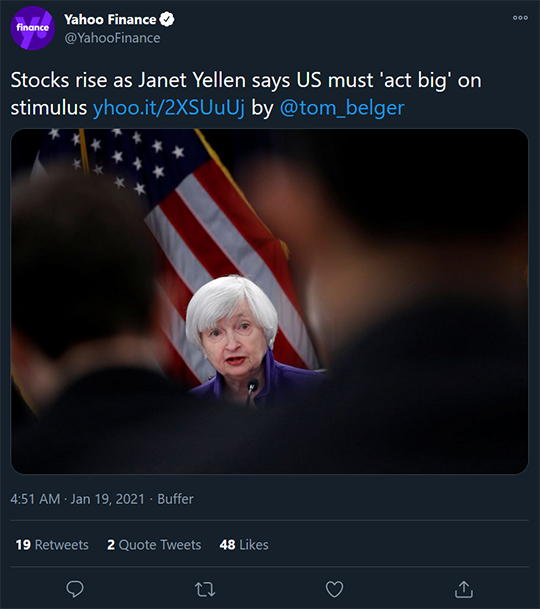 From yesterday’s Wall Street Journal: “Janet Yellen made the case for another sweeping economic aid package at her hearing to be the next U.S. Treasury secretary Tuesday, pushing back against Republican skepticism of the need for more deficit spending to bolster the recovery.”

Heh, “Republican skepticism.” Gotta love it. Republicans always find their fiscal-responsibility religion as soon as they’re out of power. But as long as the party of Nixon-Reagan-Bush-Trump is in power, deficits don’t matter. Liz Cheney’s dad told us so.

That way, the money printing — and the impoverishment — are a constant, no matter who’s in charge. Amazing how that works, huh?

Enough carping. What can you do about it? That brings us back to Mr. Kiyosaki, who joins us with the latest installment of our team’s predictions for 2021 — and beyond.

“When a person invests, let’s say in a stock or real estate, they expect an ROI, a return on investment, because they are taking a risk. When a person saves money in a bank, they expect a rate of return in the form of interest, because saving money in banks is extremely risky, especially when elites are printing money.

“As for now, as long as the Fed continues to print trillions of dollars, I suspect that the price of gold will continue to climb.”

“In 1965, I began acquiring silver coins such as dimes, quarters and half dollars. Why 1965? In 1965, the U.S. Mint began debasing our silver coins. Debasing means the Mint was diluting the silver content of our coins, mixing the coins with base metals, like copper and tin.

“The Romans did the same thing to their coins when they needed more money to ﬁght their extended wars. Sound familiar?

“In 1965, after noticing the copper tinge to American coins, I would take my paper money, go to a bank and buy rolls of either dimes or quarters. I’d unwrap them, inspecting each coin. If the coin did not have a copper tinge, I’d kept it. All the coins with copper tinge on the edge (the debased coins) I returned to the bank. Then I bought more rolls of coins and continued my search for real silver coins. It was not rocket science. I did not need any ﬁnancial education because there was no counterparty risk.”

Silver’s all-time high of $50 came in 1980… and again in 2011. Robert’s call of $40 in another four years is conservative. But in a genuine crisis, a so-called monster box of 500 U.S. Silver Eagles could come in extremely handy.

“Just as gold and silver have a limited supply, so does Bitcoin. There are only 21 million available.

“Last May, Bitcoin went through what is called a ‘halving,’ which means the pace of new Bitcoin creation is cut in half. As halvings continue over time, the pace of Bitcoin supply growth will continue to decelerate until all 21 million are mined.

Robert cites Alex Adelman, CEO and co-founder of Lolli, the first Bitcoin rewards application: “During Bitcoin’s 11-year life span, there have been two previous halvings The first was in 2012 and Bitcoin’s price increased from $12 to more than $650. After the second halving in July 2016, the price also accelerated and reached $20,000 in late 2017.”

Under those circumstances, $75k Bitcoin is fully reasonable — and not even a doubling from current levels. It’s becoming a hedge against elite stupidity in a way it wasn’t during the mini-bubble three years ago.

[Ed. note: As the money printer accelerates under Team Biden, Mr. Kiyosaki has uncovered a “secret” $7.16 trillion “money shift” happening right now — money moving, once again, from the poor and the middle class to the wealthy.

He says there are five steps you need to take to protect and grow your wealth in the month ahead. Robert clues you in the moment you click here.]

But to reinforce the “Great Disconnect” between the stock market and the economy, we check in with the little chart of horrors on this Thursday: First-time unemployment claims for the week gone by total 900,000 on the nose. 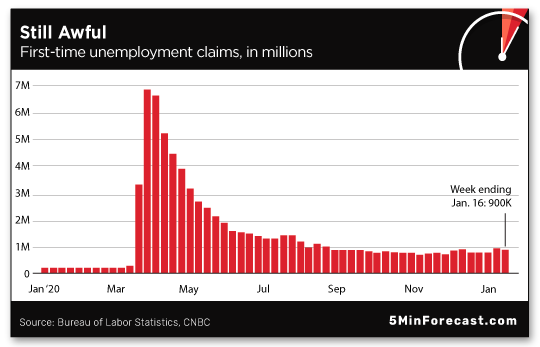 From the Law of Unintended Consequences Department: The control freaks and power trippers are rethinking their bans on indoor restaurant service.

It appears to have started last week with Chicago Mayor Lori Lightfoot, suggesting restaurants and bars reopen “as soon as possible.”

The rationale, as described by the San Francisco Chronicle: “The current COVID-19 surge has been primarily fueled by at-home gatherings and parties, and if people are going to gather regardless of what any stay-at-home order dictates, state and local governments should try to provide spaces where at least some mitigation efforts will be taken.”

California even banned outdoor dining in early December — in an explicit attempt to keep people cooped up at home. The case count exploded anyway.

But the rethink is not universal: Here in Michigan, a “three-week pause” on indoor dining that began in mid-November won’t end until Feb. 1. The orders are statewide, even though there’s no sign of the hospitals being overwhelmed in the two-thirds of the state north of U.S. 10.

For the record: On his way out of the White House, Donald Trump made sure to keep Washington, D.C.’s revolving door moving smoothly for his aides.

Eight days into his term, Trump signed an executive order banning political appointees from lobbying after they left federal employment. “This is a five-year lobbying ban,” he said at the time. “It’s a two-year ban now, and it’s got full of loopholes, and this is a five-year ban.”

Fast-forward to this week and less than 12 hours before leaving office, he signed another executive order rescinding the original one, with no explanation.

Once more with feeling, because today will probably be our last opportunity to paraphrase a famous line of Sarah Palin’s: How’s that swampy-drainy thing workin’ out fer ya?

Why do central bankers make so many dumb decisions? In the case of the Bank of England, could it be… a contact high? 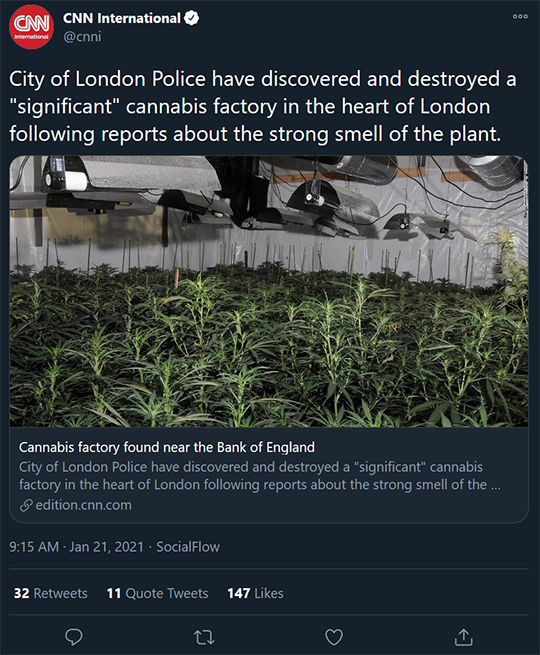 Recreational cannabis remains illegal in the United Kingdom, and the medical variety is tightly regulated. And thus, a week ago today, London police raided what they call a “significant” cannabis factory — steps away from the U.K.’s central bank.

The City of London — as the U.K.’s financial district is known — has been akin to a ghost town ever since the pandemic broke out. Police say that made it easier to set up shop with no one noticing — until the “strong smell of cannabis” from more than 800 plants became the giveaway.

Only a few days ago, the Bank of England revived speculation that it might soon resort to negative interest rates — a policy we can only describe using that delightful British term “barmy.”

“Profile in courage,” says the subject line of a reader’s email taking us to task — after we sarcastically invoked the phrase to call out Donald Trump’s failure to pardon Julian Assange.

“Whoever decided to leverage a CNN blurb into an unfair accusation of a president who stood up to four years of obstruction and lies is pretty chicken**** themselves.”

The 5: Would you rather hear it from Tucker Carlson?

Like CNN, Carlson had sources saying that Trump was warned he stood a higher chance of conviction in the Senate if he pardoned Assange and/or Edward Snowden.

And Carlson urged Trump to do the right thing anyway: Trump, he said, “can achieve a major victory for the principles that this country was founded on and that make it a good place to live. And the first one of those is freedom of the press, freedom of speech. No one else in the media feels like arguing for it. It doesn’t matter. It’s still true and we should still defend it. And he should pardon Julian Assange.”

But it wasn’t to be.

As for “standing up to four years of obstruction and lies”… can we examine the actual record and not the schoolyard boasts, please?

Jeff Deist from the Mises Institute does exactly that: “Despite all his bluster and the left’s absolute derangement toward him, Donald Trump leaves office as a caretaker president.

“His real record, not his rhetoric and Twitter persona, will prove to be astonishingly in keeping with the D.C. status quo. His America First talk on jobs and trade, his schizophrenic foreign policy, his actual actions with respect to immigration policy and even his vaunted tax cuts were not all that different in substance than anything Hillary Clinton might have done.

“Trump’s difference was tone, not substance, but along with his outsider status that was enough to earn him the vicious enmity of the Swamp.

[And, we add, the unearned adulation of his fanboys.]

“We have essentially endured a four-year national paroxysm over nothing, and for nothing. Think about that. All of this hate and division was not rooted in ‘policy’ whatsoever, but in the political class’s hatred and contempt for even purely rhetorical challenges to its power.”

“What happened to the war on cash?” a reader writes.

“A new year, a new president, uproars over pardons, impeachment trial, Springsteen looking totally washed up at the inauguration, dirty filthy fireworks from China being lit off to start the new green party deal (pollution and climate change can wait, I guess) — I did not hear a word about taking cash away.

“And I am happy to make my annual report that my Benjamins are still buying everything I try to buy.”

The Davos crowd is doing its annual thing next week — virtually, of course, not actually in Switzerland. Surely a crackdown on cash would be integral to any “great reset” they envision, right? We’ll be watching…