And Secretary Yellen’s already inspired her own rap…

In response to Biden joking that Hamilton creator Lin-Manuel Miranda should write something suitable about Yellen, rapper Dessa (never heard of her) took it upon herself to write and record “Who’s Yellen Now?”

For her efforts, Dessa got a hearty Twitter thank you from Madame Secretary herself… but did Yellen actually listen to the rap?

Lyrics include: “Damn Janet, go and get it, fifth in line for president.” And this gem: “Lift up your mojitos, because she manages the Mint.” 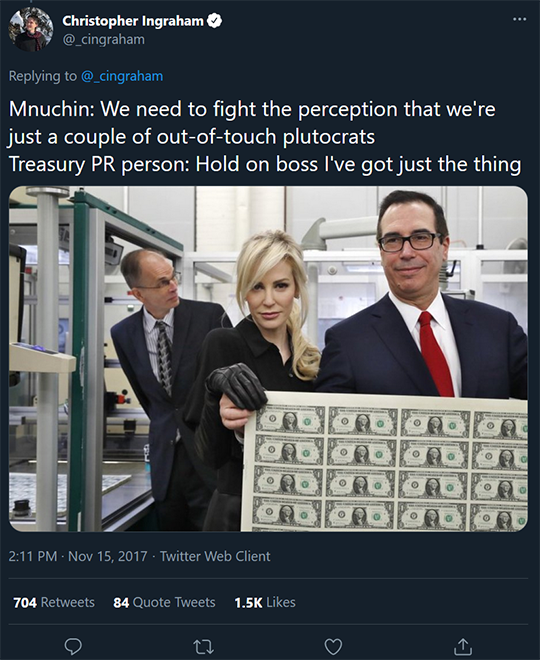 As the kids say, Mnuchin was such a meme… but to our knowledge, he was never memorialized in a rap. Perhaps because there’s not much that rhymes with Mnuchin… other than capuchin? *heh*

Today we turn to another former Wall Street banker, Nomi Prins, who was once granted unrestricted access into the belly of the central bank beast…

“Every year, the Fed, the IMF and the World Bank have an annual internal conference,” Nomi says. “The Fed invited me to talk at the opening session.”

Nomi was taken off guard: “I thought the invitation might be a mistake. [This was] a year after my book Collusion came out,” she says. “To say the least, I hadn’t written very nice things about the Fed’s policies since the financial crisis.

“In very public channels, I had criticized their cheap-money and quantitative-easing policies as subsidies to the private banks that had crashed the system,” Nomi says.

“I had labeled their policies as rigging the markets and unhelpful to ordinary citizens and the Main Street economy.

“But I was assured they knew exactly who I was,” she continues. “In fact, they wanted me to address the topic of why Wall Street banks weren’t helping Main Street and looked forward to hearing my views.

“A few months later, I was listening to Fed Chair Janet Yellen proclaim that the worst of the crisis and its causes were behind us,” Nomi says. “When I got up to speak, the gloves came off.

“The first thing I asked the distinguished crowd was, ‘Do you want to know why big Wall Street banks aren’t helping Main Street as much as they could?’” she recounts. “The room was silent.

“I paused before answering for everyone: ‘Because you never required them to.’

“When a bank is offered a pile of cheap money in bailouts and loans for dangerous behavior with no major consequences and no stipulation that they engage the real economy, then why should they?

“What would you expect?

“Something interesting happened after my talk,” Nomi says. “Some of the rank and file at the Fed told me it made sense. Many thanked me.

“Central bankers from Lebanon to Thailand thanked me for making it clear that the entire monetary system is controlled more than ever by the major central banks,” she says, “with the Fed leading the way.

“I realized… that the zero interest rate policies prevailing in the U.S., Europe and Japan are part of a coordinated effort,” Nomi says. “They are trying to render the cost of money cheap everywhere so that banks and other financial players can thrive.”

Even during a pandemic…

“The central banks are the market,” Nomi stresses. “Without them, the markets would be nowhere near today’s levels.

“The major central bankers have worked together since the 2008 financial crisis to rig the markets, inflate asset bubbles and coddle private banks under the guise of helping the real economy,” she says.

“That’s obviously continuing today, and has been greatly amplified by the pandemic.

“The upshot is this…

“Central banks give themselves a blank check — to resurrect the market — without having to tell the public where the money is going,” Nomi says.

“We must demand accountability from these unelected central bank leaders,” she says. “But in the meantime, you should be keenly aware of the risks associated with this collusion.

“Make sure you keep an allocation of your money out of the banking system. I recommend you take some of that cash and put it into hard assets like silver and gold.

“And be sure to decrease your debt levels,” Nomi says, “the more the better.

[Note: The Fed’s FOMC meeting is in progress at the time of writing, followed by Powell’s presser this afternoon. We’ll follow up on anything of interest tomorrow…

But here’s the big picture: No matter what you think of Biden or his Cabinet picks, money loves certainty…

Are millions of Americans still scared right now? Absolutely. But you could’ve said the same thing in 2009… immediately before stocks enjoyed their longest bull market in history.

While hindsight is 20/20, there’s ONE SHOCKING reason why everyone should’ve bet on stocks back then. It’s the same reason why Nomi predicts many stocks will run even higher now.

You’ll find everything you need to know watching Nomi’s video… but if you wait until Monday to watch, it might be too late.]

[Note: The Fed’s FOMC meeting is in progress at the time of writing, followed by Powell’s presser this afternoon. We’ll follow up on anything of interest tomorrow…]

“[GME shares] jumped all the way to $365 premarket before settling in closer to the $200 level, only to open back around $250. This stock is completely untradeable right now (in my mind),” Greg says. “It’s more of a spectator sport.

“It’s also distracting from the broad market action that’s so important right now,” he says. “It’s earnings season. Big, market-moving names are reporting and it feels like they’re just screaming into the void. We have Apple and Tesla reporting this evening.”

We’ll look into that tomorrow…

“Trading is wild right now,” Greg emphasizes, “and the overall market is taking a hit.”

And about that whole Janet Yellen-doesn’t-like-crypto thing, Bitcoin’s getting clobbered today. Hmm… The flagship crypto is down 6.5% to $30,250.

The Census Bureau says orders for durable goods — anything designed to last for three years or longer — grew just 0.2% in December, less than economists expected.

And if you back out the volatile aircraft and military categories from the number, “core capital goods” disappointed expectations with a 0.6% rise last month.

“There are a lot of moving parts,” he says, “but here are the biggest items in the package that you should be aware of…

“At this point, I’m not debating the merits of Biden’s proposal,” Zach says. “I simply want to explain what this package could do to your retirement savings.

“But I have to tell you that alarm bells are going off,” he says.

“The personal payments listed above… will undoubtedly cause a surge in demand for goods and services.” Zach says. “That’s kind of the point, after all…

“Flood the economy with cash so that people buy things and drive economic activity.

Problematic, no? Zach believes stimulus payments might de-incentivize unemployed workers from getting back into the workforce.

“Think about what happens when the government gives people money to buy things,” he says, “but makes it tougher for companies to produce things.”

Zach concludes: “Whenever you have more money chasing fewer available resources, the prices of those resources are bound to move higher. That’s what inflation is all about.

“So in the year ahead, I expect to see inflation kick in for the American economy,” he says.

We won’t leave you hanging… Zach’s back with more tomorrow on how to protect your retirement nest egg from inflation.

“Greetings and thank you for an excellent publication that I have enjoyed and profited from for decades,” a reader writes.

“Do I self-censor all my online communications? Of course I do. I am not an idiot. Remember, anything posted online is there forever.

“There are daily examples of ‘free speech’ being used to destroy people who are not allied with the current elite. I am shocked by how open some so-called leaders are in their calls for censorship.

“They too will fall victim to their own ill-advised policies.”

The 5: The Reign of Terror example yesterday seems especially apt…

“My husband has been very outspoken about politics,” says our next contributor. “He and I are both big Trump supporters, and we had been posting about it.” (See above.)

“Now we say nothing on social media unless it’s about our dogs or maybe cooking because we fear we might lose our biggest client, be asked to leave our brokerage or even have our licenses suspended. We are real estate brokers in [redacted].”

“I lived and worked for more than 20 years in Asia,” says our final contributor today, referring to Tuesday’s China-centric issue of The 5.

“The one hard rule that I learned early on was when you meet with personnel from other companies, you meet with your business equivalent.

“As one chairman of a large Philippines company drilled into me over the years, it’s always manager to manager, CEO to CEO and, without question, president to president.

“The photo then says a lot: 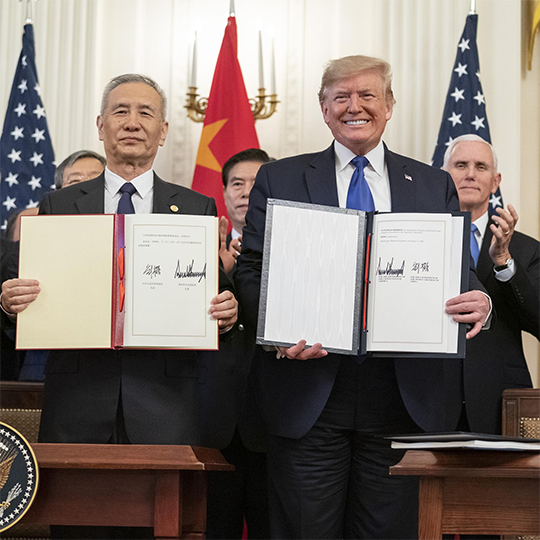 “Signatures of the president of the United States alongside that of Chinese Vice Premier Liu He… equals a failed Phase One agreement.

“That’s according to my hard-won Asian experience.”

The 5: Thanks for that insight. We like to believe we have some of the most engaged, informed readers in the biz. Our reader proves our point…

P.S. This is everything the mainstream doesn’t want you to see.

But what it reveals could impact millions of Americans… overnight.

And that’s exactly why you need to see this video now.

You have just a few hours left… After which it might be too late.