“The Fed is maintaining its plans to buy $120 billion in Treasury and mortgage securities per month,” he says. “Purchases are not likely to accelerate unless we see a sharp decline in stocks or a rise in corporate bond spreads.

“At this point, everyone expects the Fed’s policy rate to remain near zero for years – even if reported inflation accelerates higher.

“In the years ahead, stimulus will come from Janet Yellen’s Treasury Department,” Dan says, “which spends money appropriated by Congress.

“The Powell Fed looks eager to indirectly fund much of this fiscal spending by buying many of the Treasury bonds that must be sold to fund the deficit. 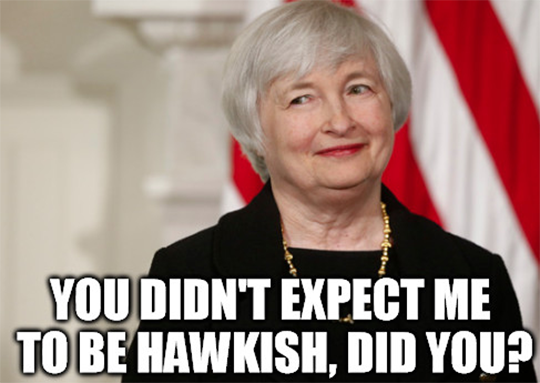 “Here’s an interesting thing to keep in mind: Any Treasury bonds that the Fed buys and perpetually rolls over into new bonds are not really part of the national debt in practice,” says Dan.

“That’s because the interest payments on the Treasuries held by the Fed are remitted… right back to the Treasury.” Sheesh…

“Here’s the downside to this seemingly free lunch: By maintaining a permanently large balance sheet, giving free financing to the Treasury, the Fed is effectively limiting its flexibility to shrink its balance sheet,” Dan says.

“The takeaway for investors is they should have a healthy portfolio allocation to gold and silver,” Dan says.

“The precious metals market is still dominated by a tiny subset of investors who pay attention to the risks outlined above,” he says.

“A larger percentage of mainstream investors should buy precious metals as insurance against an accelerating decline in confidence in the dollar,” Dan concludes. 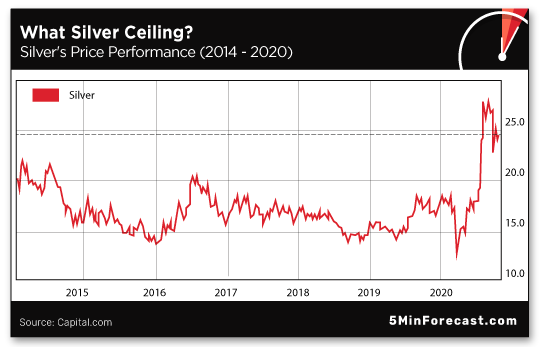 “Not only did silver outperform gold in 2020, it outperformed every other major asset class…

“The question for investors,” says Jim: “Where does silver go from here?” To answer that question, Jim inventories factors that affect the price of the white metal…

“Silver is both a form of money and an industrial commodity,” Jim says. Silver differs from gold in that it “responds to the business cycle, since more or less silver may be needed for industrial [applications].” Think water purification, solar panels, medical instruments, etc…

“It’s the best electrical conductor of any metal,” Jim notes. “It is also used in automobile emissions-control equipment. All of these industrial and scientific applications qualify silver as a commodity.”

At the same time: “Its monetary price responds to the same factors that affect gold, including inflation, interest rates, flight to safety and the exchange value of the dollar.

“Given silver’s recent outperformance (and the tailwinds provided by the price of gold),” Jim says, “here’s the prospect for silver in the months ahead…

“We should expect geopolitical stress as North Korea, China, Russia and Iran all test the resolve of the new Biden administration,” he says. “This does not mean war will result, but it does mean we can expect hot spots to become more tense.

“This tension is bullish for precious metals prices.”

Other factors that favor silver? “Interest rates will remain at zero (for short-term rates) and 1% or less (for long-term rates) through all of 2021,” says Jim. “And the dollar should remain weak both because of zero interest rates and weak economic growth.

“Finally, the Biden administration and its secretary of the Treasury, Janet Yellen, have embraced Modern Monetary Theory… without outright naming it,” Jim says.

The yawning federal deficit along with never-ending money printing can only mean one thing: inflation. “Even if inflation does not emerge immediately, inflationary expectations are on the rise,” Jim says. “That’s also bullish for silver.

“All of these factors — geopolitics, interest rates, exchange rates and inflation — are set to boost the price of silver in 2021,” Jim concludes.

[Ed. note: If you are serious about securing your financial future from the ravages of inflation and more, Jim’s noticed a rare occurrence in precious metals that he’s not seen in years.

No, you won’t hear about it on the evening news — let’s face it, the mainstream media are preoccupied with other events. But Jim’s spotted a window of opportunity… you ignore it at your financial peril.

So don’t invest in anything until you watch Jim’s urgent report.]

“The short squeezes we are seeing this week are historic,” says analyst Greg Guenthner. “The mania is real and it is spreading.

“All this attention is on [Reddit’s] ‘WallStreetBets’ stocks,” he says. “These crazy young gunslingers aren’t spreading the wealth — they’re just pumping the same four or five stocks every day.”

And this is interesting: “The crazed speculators are trying to pump silver now,” says Greg. “Let’s see if we can swim in their wake.” Indeed…

Some of the biggest tech names reported fourth-quarter earnings Wednesday with Apple announcing its most profitable quarter ever on the strength of pricey cellphone and laptop sales, likely bolstered by the WFH revolution.

Facebook also posted record revenue on the strength of its ad sales… but warned investors advertising might get messy next quarter. On FB’s earnings call Wednesday, The Zuck got pissy, calling out Apple’s plan to incorporate an opt-out feature on its iDevices, essentially blocking third-party data collection — “a move Facebook has said could hamper its ad-targeting capabilities,” Wall Street Journal says.

Then there’s Tesla… which missed badly on earnings, but notched a beat on revenue. “The company also reported positive free cash flow for 2020 of $2.79 billion, more than double its 2019 figure of $1.08 billion,” CNBC says. At the time of writing, TSLA shares are down 2.7%.

Being it’s Thursday, we check in on the little chart of horrors: First-time unemployment claims for the week gone by total 847,000… 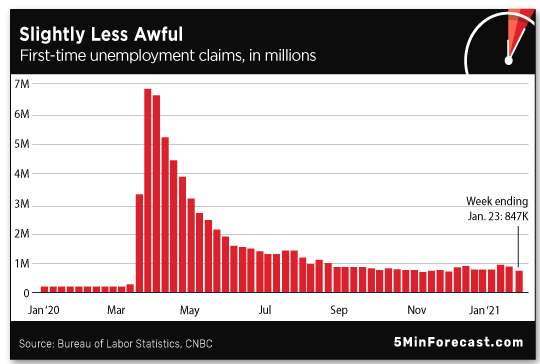 CNBC notes: “The total [number] of Americans receiving unemployment benefits actually rose, jumping to 18.28 million, an increase of 2.29 million from the prior week.

“That increase is related to the latest fiscal package passed in December, which included extended benefits for displaced workers.”

And we don’t normally put much stock in the largely nonsensical GDP, but we learn Q4 GDP at 4% came in below the anticipated 4.3%. The GDP for all of 2020? Negative 3.5%… or the worst reading since World War II ended.

For more on the “Great Disconnect” (the market vs. the real economy)…

“A rebound this year still leaves per-capita income below where it was before the crisis,” she emphasizes. “Calling it a recovery is misleading.”

We approach the one-year mark of the pandemic, the length of which is one of Reinhart’s top concerns: “The longer this goes on, the more strain on balance sheets of individuals, households, of firms, of countries. It’s a cumulative toll.”

“What happens when those programs come to an end?” Reinhart asks. Rhetorically?

And from the economist who co-authored a book about the 2008 financial crisis, Ms. Reinhart doesn’t foresee a “Lehman moment”; rather, Business Insider says: “A coronavirus-fueled financial crisis would likely emerge as a less dramatic event and more as a slow crawl.”

“Your retirement money must increase faster than the rate of inflation,” says retirement specialist Zach Scheidt, who’s back today with ways to protect your retirement nest egg.

“The best way to combat this risk,” he says, “is to invest your savings in areas that will rise during periods of high inflation.

“Typically, that means buying real tangible assets. Gold and precious metals certainly fit this category,” Zach notes. “But there are other tangible assets that you can invest in that might offer more protection against inflation while also giving you great cash flow to cover your income needs.

“One great alternative is buying a residential property that you can rent to tenants.

“You may think owning individual real estate isn’t an option for you if your retirement savings are tied up in a retirement account like a 401(k) or IRA.

“But some options still make owning rental property feasible,” Zach says, “even through your retirement account.

“First, you need to open an IRA with a special custodian that facilitates real estate transactions.

“This is pretty easy to do,” says Zach. “And you can do a quick internet search for ‘IRA custodians for real estate’ to find a list of potential custodians in your area.

“Once you have the IRA open, you can transfer money from your existing IRA or 401(k) to this new IRA account.

“From there, it’s a matter of picking out the property you want to own,” Zach says. “You can work with your representative at the IRA custodian to get all of the paperwork together.

“In some cases, you can even use the funds in your IRA to pay for a portion of the property and then take out a mortgage for the rest. The mortgage could then be repaid through part of the monthly rent payments.

“It’s a great off-Wall Street way to grow your income and protect your retirement,” Zach says.

[Note: Check with your tax professional to make sure this doesn’t trigger any issues with your personal retirement account.

Another consideration? Biden signed an executive order last Wednesday to extend the moratorium on evictions and foreclosures — for qualified tenants — beyond the Jan. 31 expiration. Stay tuned… ]

And fresh from our digital mailbag: “You asked if I am self-censoring? Absolutely…

“I am not paranoid,” he concludes. “They are out to get me.”

We’re back tomorrow with a special episode of The 5… Be sure to check it out.

P.S. This might be the most important message from Jim Rickards in years…

There’s something going on right now that Jim’s been writing about for almost a decade.

And the timing is right for you to take advantage of this rare occurrence. But the window of opportunity won’t stay open forever…