Amid the GameStop-Reddit phenomenon, our macroeconomics maven Jim Rickards is experiencing flashbacks to nearly a generation ago… 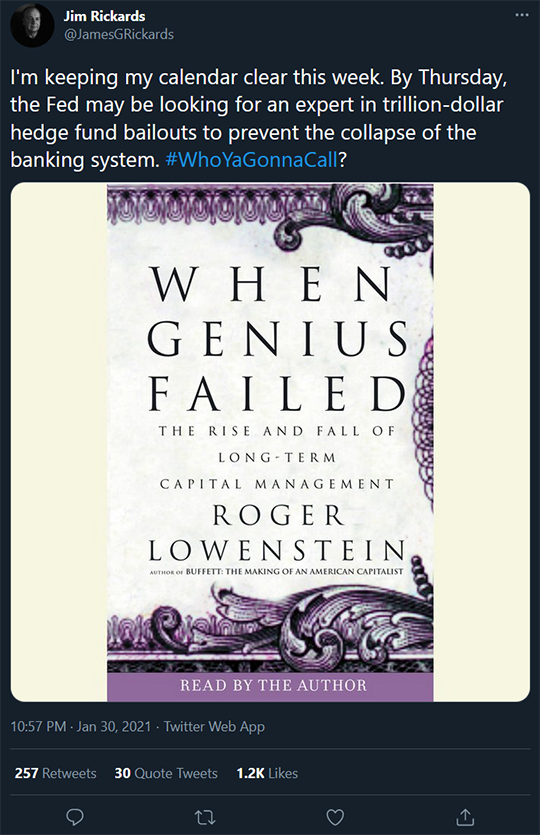 The book pictured there, by financial journalist Roger Lowenstein, is the definitive account of Long Term Capital Management — a hedge fund that collapsed in spectacular fashion in autumn 1998. Jim was LTCM’s top lawyer and a key source for Lowenstein’s reporting.

LTCM’s failure threatened to take down the rest of the financial system with it; Jim negotiated a rescue with the Federal Reserve and 14 top banks. LTCM was able to cover its losses and prevent a domino effect among the banks’ derivatives trades. (No taxpayers were harmed in this bailout.)

Of course it’s hedge funds that have booked the biggest losses in the present short squeeze on GameStop and similar names — in total, about $5 billion.

Question: Is it really possible the WallStreetBets crowd on Reddit could start another domino effect that threatens the whole financial system again?

The most plausible answer: Maybe, but not yet.

“The big banks, brokers and hedge funds know how to circle the wagons to protect their own interests when the time comes,” Jim says with firsthand knowledge.

“Wall Street wasn’t bailing out a hedge fund in 1998; they were bailing out themselves since they stood on the other side of the LTCM trades.

“Something similar happened in 1980 when the Comex changed the rules in the middle of the trading day to break the Hunt brothers’ effort to corner the silver market.”

“When you rely on exchanges and paper contracts for your profits, the rules can always be changed to terminate your bets and rob you of future gains,” Jim says.

Thus Robinhood’s decision on Thursday to restrict buying of GameStop, AMC Entertainment and so on.

“Robinhood was bailed out with loans from JPMorgan and Goldman Sachs while mega-hedge fund Citadel pulled strings behind the scenes to cause Robinhood to hurt its retail clients with the trading suspension,” says Jim.

“Interestingly, the loans and a related capital injection were needed to keep Robinhood itself afloat because it was having difficulty meeting clearinghouse requirements for payments to its own customers. Not only had the hedge funds lost billions of dollars, but Robinhood was also on the brink.

“So the hedge funds, clearinghouses and Robinhood banded together to crush the retail mob that was bidding up the stocks that hedge funds had shorted.”

Adding some color to Jim’s account is a Reddit poster who purports to be a Robinhood employee. This is from Friday, the day after buy orders were restricted. 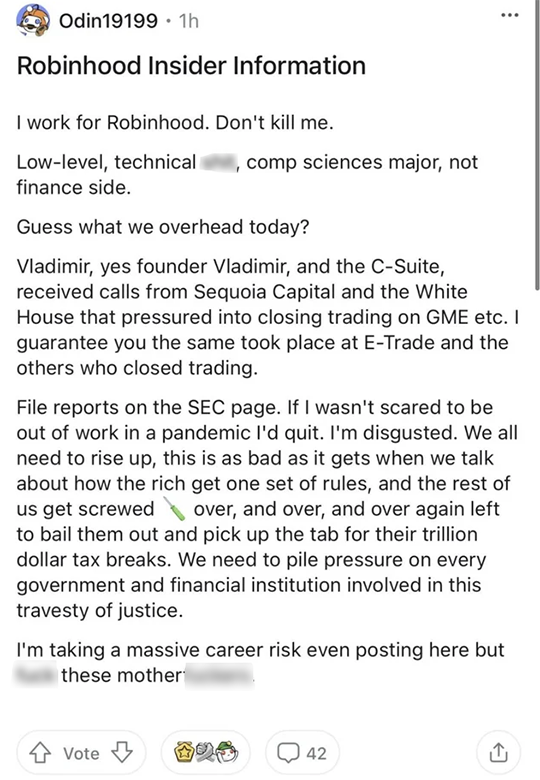 If the guy isn’t for real, he sure has a keen sense of the zeitgeist.

Meanwhile, if the Redditors were serious about exploiting “the world’s biggest short squeeze” in silver, they sure didn’t have much staying power.

Which brings us to a reader inquiry after yesterday’s 5 that can’t wait for our mailbag section. We suggested the Redditors were acting out the perennial wish of gold and silver bugs that someone would “stand for delivery” of physical metal when a futures contract expires.

“Pretty sure,” the reader responds, “that the exchange can pay you and not deliver the metal.”

Absolutely true. Our point is that if someone did stand for delivery and got cash settlement instead… it could undermine confidence in futures, ETFs and other forms of “paper silver” so badly that there would be a run on real physical metal. If you could get any at all, you’d pay through the nose.

We got a taste of that yesterday with major dealers nearly cleaned out of their silver inventory. Even our friends at Hard Assets Alliance, with access to an unparalleled wholesale network, are a bit stretched. They’ve got 100- and 1,000-ounce bars available this morning… but if it’s 1-ounce coins you want, all they’ve got are Austrian Philharmonics and generic silver rounds.

Yes, the situation will likely stabilize in a few more days. That’s when you’re going to want to start preparing for the next shock — which will likely be more severe.

“Make sure you have some gold and silver in physical form in safe storage,” says Jim Rickards. “That way, when the exchanges switch the rules on paper contracts to protect the banks, you can keep your physical metal and also keep your profits.”

Like silver, the other assets bid up by the WallStreetBets crowd are deflating this morning.

In retrospect, the beginning of the end came at the market open yesterday… when a chicken chain glommed onto the phenomenon for marketing purposes. 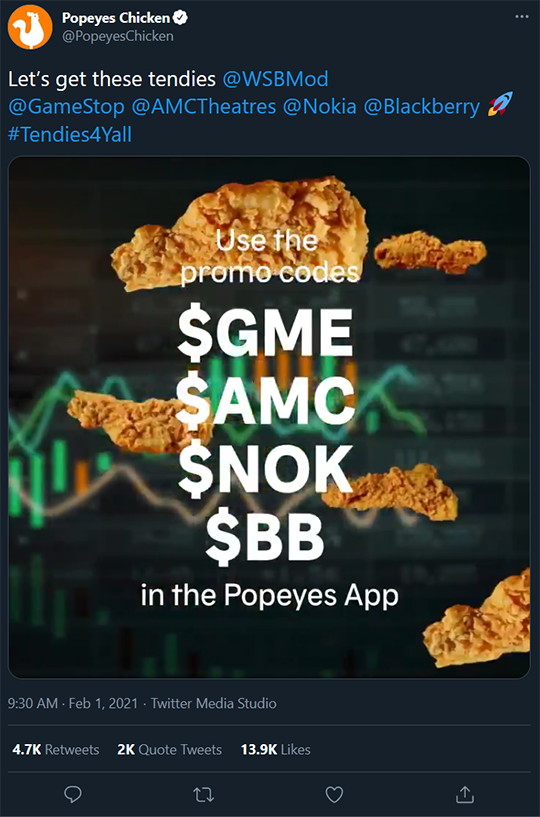 For whatever it’s worth, Popeyes parent Restaurant Brands International (QSR) is up about 5% in the last two days.

But the newly empowered retail trading Redditors are now a force to be reckoned with.

Last spring brought the rise of newbie retail investors — everyday folks in lockdown who, for instance, bought airline stocks when Warren Buffett sold. Not a bad buy-and-hold these last nine months — the airlines are still higher now than when Buffett bailed.

But now we’ve got newbie retail traders. And Wall Street’s Masters of the Universe, supremely confident in their short positions, never saw them coming.

“The Masters did not see the many thousands of retail traders banding together as a large enough force to halt their best-laid plans,” writes Bianco Research chief Jim Bianco at Bloomberg.

“As a result, a big new player with lots of money and sophistication has entered the game and is probably not going away. They are outsiders who use the Masters’ own practices to change the rules and win.”

At least until the Masters change the rules back in their own favor.

We watch and wait for the next confrontation — at a time and place of the insurgents’ choosing. That’s how an insurgency works…

In the meantime, the major U.S. indexes are adding big-time to yesterday’s gains.

Crude is up 2.5% and pushing toward $55 a barrel for the first time in nearly a year.

No economic numbers today. The next big one will be the Labor Department’s January jobs report, due Friday.

“2021 is looking more and more like the big year that will see federal pot legalization,” says our Ray Blanco, eyeing the cannabis market.

“The new Congress is poised to vote on a bill this year, with a strong potential for it to clear both chambers and head to Biden’s desk for signing.”

Thus, even though pot stocks have enjoyed a good run recently, Ray believes there’s more upside. They’re coming off “incredibly depressed levels, and are generally still far from their highs. 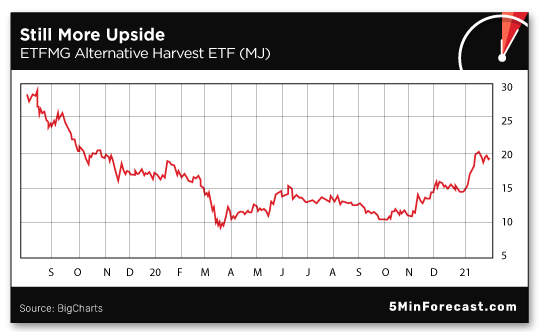 “Moreover,” Ray says, “much of the ‘big money’ hasn’t moved into pot stocks yet. Most companies aren’t listed on major exchanges, locking out Wall Street funds. In addition, most institutional investors can’t buy shares in companies that are technically illegal businesses in the eyes of the feds.

“That money would start flooding in once circumstances changed, boosting cannabis names to all-time highs, putting up huge numbers from where pot companies are trading today.”

“What do you think that $15 per hour federal minimum wage will do to businesses?” a reader writes, circling back to last week’s discussion of the many elements within the White House’s $1.9 trillion “stimulus” proposal.

“That will destroy a lot of the small businesses in small-town America. And possibly larger businesses. They will not be able to make enough of a profit to survive on while paying employees $15 per hour. So they will have to mark up prices even more (if people are even willing to buy those products at those higher prices) and hope they can survive. So what will that do to jobs? What will it do to inflation?

“We will have more unemployment and more people who cannot take care of themselves because the costs of everyday products will be double what they are now. You really think that would be a good idea at this point in time? Probably not.

“What about teenagers? Do you really think that a teenager is worth $15 an hour when they are first starting to work? Probably not. Or will jobs be so scarce that all the jobs teenagers would normally get would be taken by adults? Let’s think about this a little more.

“Thanks for listening to my rant from small-town America.”

“I don’t understand the big fuss every time a $15 minimum wage is proposed,” another reader counters, tongue firmly in cheek.

“Modern economists have repeatedly assured us that higher minimum wages have no adverse impact on the economy. That being the case, why stop at $15/hour?

“An excellent case can be made for a $1,000/hour minimum wage. It would mean everyone working more than half-time would earn more than $1 million annually. Prosperity would abound. The majority of the population would be maxing out Medicare and Social Security and paying income taxes at maximum rates. The U.S. Treasury would be overflowing. Social Security would be back on a sound footing. Medicare could be expanded and improved. Happy days would really be here again!”

The 5: The writing was on the wall nearly two years ago when McDonald’s abandoned all lobbying efforts fighting a $15 minimum wage — on either the state or federal level.

MCD has the resources to pay a $15 minimum wage. Your mom and pop restaurant that serves an undoubtedly tastier burger? Depending on where you are, not so much.

The big get bigger…

“No words of ‘wisdom’ — just kudos for a truly excellent issue,” a reader writes after yesterday’s single-topic episode of The 5.

“Hurrah,” says another, “love reading The 5. Keep it up. Education is a thing not done these days in school. We have to get it on our own. The 5 is helping me do that.”

The whole phenomenon has been a blast to observe. It’s not just Wall Street that’s unable to wrap its mind around the Reddit uprising. As we suggested yesterday, it’s the entire power elite. 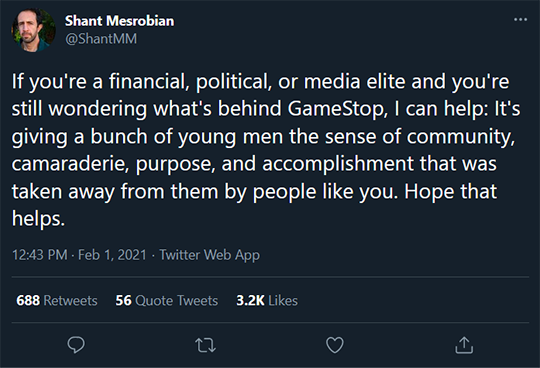 P.S. We have a strict cap on availability for one of our hottest new research projects.

Our resident futurist Robert Williams is inviting 250 readers to join him in an exclusive “beta test” involving a subniche of fast-moving stocks.

Pique your curiosity? Follow this link to see if any slots are available. Please note: Even if slots are still open, the offer shuts down at midnight tonight.