“One of Biden’s first actions as president was to rejoin the Paris climate agreement,” says Zach Scheidt. “It’s clear that the environment will be a high priority for this administration.”

Makes sense then for investors “to focus on companies that will benefit from new environmental initiatives,” he says, including “stocks that are gaining momentum ahead of a new green wave sweeping Washington.

“Over the next two years, I expect the Democrat-controlled Congress to pass initiatives to incentivize energy companies to build solar and wind farms across the country to generate more green power,” Zach says.

“NEP also owns natural gas pipelines, which will prove to be important in the new environment-friendly season ahead,” says Zach. “Natural gas is clean burning and continues to be a popular way to generate electricity without creating pollution.”

Zach notes: “One reason I love shares of NEP is the company is organized as a limited partnership. That means NEP isn’t required to pay corporate taxes, but the company is required to distribute the vast majority of its cash flow to investors.

“If you buy shares today, you’ll tap into a great stream of dividends that currently add up to a 2.8% annual yield,” he says. “That’s a respectable yield in today’s market, but I expect distributions to grow in the years ahead as policies in Washington make NEP’s existing assets more valuable.”

And shares have already gained traction since the elections… 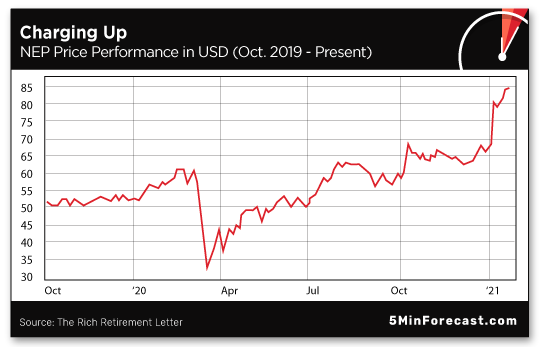 “NEP makes a great play for generating income and profiting from the green wave in Washington…. in a regular taxable brokerage account,” Zach emphasizes.

(Because of its limited-partnership structure, Zach says to check with a tax professional if NEP is suitable for your tax-free or tax-deferred retirement accounts.)

“On top of clean and renewable energy, electric vehicles will be another major priority for the Biden administration…

While some investors worry MGA might be a one-trick pony, he notes: “MGA’s drivetrain products make up a small segment of the company’s overall business. 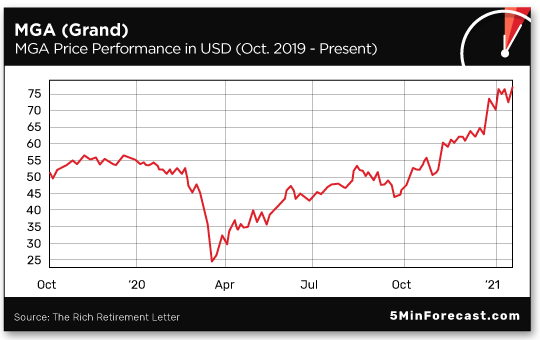 “A surge in demand for electric vehicles in the next two years will help drive bigger profits for MGA,” Zach says.

“Meanwhile, MGA also qualifies as a value stock, since you can buy shares for just over 11 times earnings,” he says. “That means you’re paying about $11 for every dollar the company generates each year in profit — a big discount to the overall market.”

As far as MGA’s dividend, Zach says: “Shares currently yield 2.1%, giving you some extra income while you wait for the stock price to continue higher.”

For another way to play the automobile revolution…

“Shares have rocketed higher in the last few months,” he says, “gaining momentum as the climate changes in Washington.” Heh… pun. 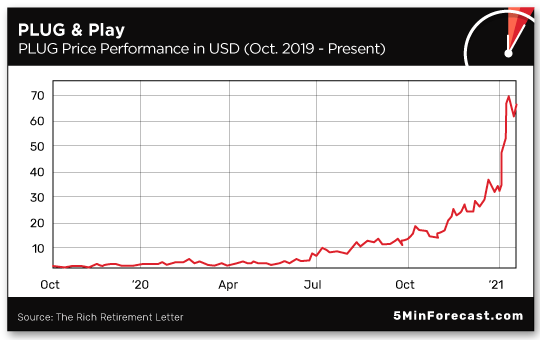 But Zach’s upfront: “The company has yet to turn a profit, so don’t invest too much of your retirement capital into this one particular stock.”

Instead, Zach sees PLUG as “a long-term profit opportunity if the technology becomes more widely adopted.” And he sees potential for hydrogen fuel cell technology going beyond cars on the roadway — with applications for industrial vehicles and equipment too.

“There you have it,” Zach concludes, “three great ways to play the green wave resulting from the Biden administration’s policy changes.”

Green energy is liable to be fertile ground for M&A activity in 2021, and Zach will be eyeing names for his premium advisory Buyout Millionaires Club. We’ll be reopening the service to new members in a few more weeks…

Bitcoin? The flagship crypto’s in the green at the time of writing at $37,000.

“The chip shortage that emerged in Chinese factories late last year continues to disrupt output for manufacturers at a time when many are still recovering from COVID-19-related plant shutdowns in 2020,” according to The Wall Street Journal.

“The auto industry is now one of the world’s biggest purchasers of computer chips, and demand is only increasing as car companies load their latest models with big-screen displays and more sophisticated tech.”

Because of the shortage, GM announced Wednesday it will be “scheduling downtime” at four of its assembly plants — three in North America — “as it tries to mitigate the impact of the semiconductor shortage and keep factories making higher-demand models like large trucks and SUVs running,” WSJ reports.

“Industry executives fear that the problem will only get worse before it gets better.”

Hey, whad’ya know? First-time unemployment claims last week were fewer than expected, and below 800,000 for the first time since late November… 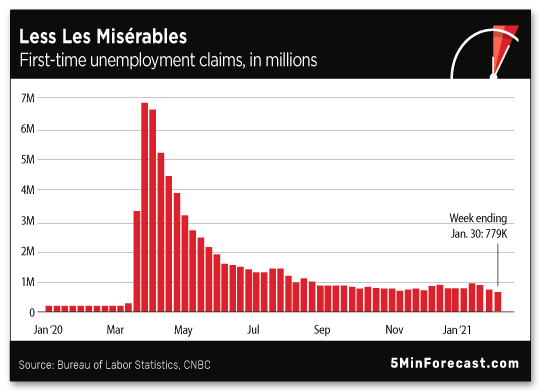 “Last week’s drop in claims came largely due to a decline of more than 55,000 in Illinois, though much of that drop was offset by a gain of more than 46,000 in California,” according to CNBC. 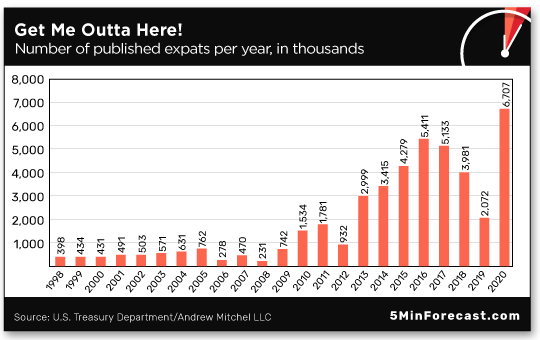 Looking at the chart, it’s worth noting how few people fled the U.S. during the Great Recession. Hmm… That trend reversed in Obamatime, and then ramped up exponentially during Trump’s single term.

Another curiosity: Did you know the Treasury Department actually publishes the names of individuals who either surrender their U.S. citizenship or their long-term U.S. residency? Seems kinda petty.

According to Reuters, Treasury Secretary Janet Yellen will need an “ethics waiver” to take part in a meeting with poobahs from the Federal Reserve, N.Y. Fed, SEC, CFTC and Treasury Department. The meeting’s purpose? To “do something” about the Reddit insurgency, dammit!

And Secretary Yellen might have a teensy-weensy conflict of interest… seeing as she collected $700,000 in speaking fees from Citadel, the giant hedge fund that has several fingers in the GameStop-Robinhood pie.

Apparently it’s up to Treasury Department lawyers — i.e., her own employees — to issue this “ethics waiver.”

You can’t make this stuff up…

“For the first time in over 100 years, renewable energy resources surpassed coal output in May 2019,” says our breakthrough-technology expert Ray Blanco.

There are two key factors at play here…

“Coal’s on its way out,” Ray notes, “while other energy sources are on the rise. Everything, that is, except stagnant nuclear power.

“There’s a definite stigma associated with nuclear energy,” Ray says. “Just mention Chernobyl, Three Mile Island or even the most recent scare from the Japanese disaster at Fukushima and there’s enough fodder to scare people into believing that nuclear power is dangerous.

“On the other hand, in the entire history of the U.S. there’s only been one major accident, and that happened over 40 years ago,” says Ray. “Since then, the technology has improved dramatically.

“According to the U.S. Energy Information Administration (EIA) nuclear plants account[ed] for nine of the top 10 power plants by electricity generation in 2019,” Ray continues. “Ten years ago, four coal-powered plants [were] in the top 10, but now it’s nearly all nuclear.”

And nuclear energy’s gotten a strong show of support…

“The goal is to transform the nuclear sector known for being bloated and inefficient to something that is safe and globally competitive.

“The Biden administration has stated its support for this effort,” Ray says, “which is only good news for the sector.

“Given we need an enormous amount of energy” (see green initiatives above) “nuclear is the most efficient way to meet the energy demand,” Ray says.

“I believe investing in nuclear energy RIGHT NOW is the best time to get ahead of the trend.” And here’s how…

“I believe this trend is going to stick around for a long time,” Ray concludes. And adding URA to your portfolio will give you “access to a variety of companies without getting burned by one.”

There are more ways to gain from the trend in nuclear power… and Ray’s landed on one company he believes has the best shot at outshining the rest.

And early next month, Ray will be releasing the company’s name in the monthly issue of his premium service Technology Profits Confidential.

A team of archeologists unearthed 2,000-year-old mummies in Egypt… that defy the term silver-tongued. 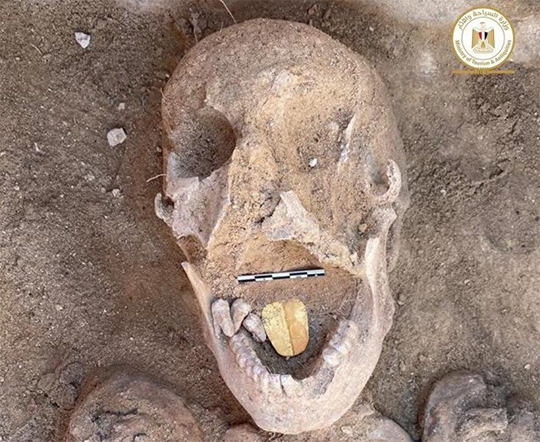 Instead, 16 mummies got upgraded to gold, ostensibly to communicate with Egyptian god of the afterlife Osiris.

Of course, in light of the drubbing gold’s getting today, that tongue’s worth considerably less…