Bitcoin and “the Crypto Clock”

With that in mind, we invite in our resident futurist Robert Williams today.

Not that long ago, on Dec. 29, we asked him to peg a dollar price for Bitcoin.

He gave us a more nuanced answer — foreseeing parity between the Bitcoin price and the level of the Dow Jones Industrial Average before Valentine’s Day. Said parity arrived well ahead of schedule — as soon as the stock market began a new trading year on Jan. 4.

Instead, Bob encourages us to think about the development of cryptocurrency on a decades-long timeline.

“If we look at other technological breakthroughs,” he tells us, “the adoption timelines are consistent.”

“Yet it took another 50 years for the Interstate Highway System to begin construction. America’s postwar economic boom (1945–1973) was mostly the result of connectivity… that is, laying 40,000 miles of highways across the country.”

Example: The personal computer and, in time, the smartphone. “Ground zero for computing was 1976, marked by release of the Apple I.

“Since then, the science has been perfected to the point where it’s easy to own… fits into our back pocket… with connection speeds that allow us to stream movies in seconds. In other words, the technology has fully matured.

“Therefore, much like the highway system, universal connectivity — epitomized by the internet of things — is the next phase of growth for computing… and that’s what we’re seeing happen now with the rise in the Nasdaq.”

So ponder this: As Bob sees it, the cryptocurrency clock does not begin with Bitcoin’s initial release on Jan. 9, 2009.

Instead, cryptocurrency’s origins go back another 20 years — to 1989.

Yep. The year when the Berlin Wall came down, when Cisco wasn’t yet a publicly traded company, when Milli Vanilli was actually a thing.

It was also the year that an early form of electronic money called DigiCash made its debut.

“DigiCash developers introduced something called ‘Blind Signature’ technology,” Bob explains, “which used a combination of public and private passwords to confirm transactions. Therefore, DigiCash is our Model T or Apple I computer, so to speak — it’s ground zero for the crypto boom.

“The 1990s then saw the development of three other Bitcoin predecessors — with each one adding more sophistication to cryptography.

“In 1997, Hashcash provided a useful mining algorithm. In 1998, an anonymous electronic payment system called ‘B-money’ advanced the concept of a decentralized network.

“Also, in 1998, although never implemented, ‘Bit Gold’ further enhanced decentralized networks with a system that did not require a third party to confirm transactions. Bit Gold’s developer, Nick Szabo, is viewed as a potential ‘Satoshi Nakamoto’ — the pseudonym for Bitcoin’s still unidentified inventor.”

So… if the merger of currency and cryptography is actually three decades along, and still two decades from being an ever-present force in our lives… then what?

Before we answer, a reader inquiry after yesterday’s 5: “Dave, please explain to me — a simpleton — how Bitcoin can even remotely be considered ‘money’ whose cornerstone characteristic is being a medium of exchange when its daily volatility is almost literally off the charts?

“Who would want to accept any amount of Bitcoin on Monday afternoon when its value could drop precipitously the next morning? Similarly, who would want to spend a bitcoin in the afternoon when its value might increase greatly 10 hours later? Seems like it’s an asset that is subject to the old market adage…’that it’s going to keep going up…’ Well, why will it keep going up… just because it will. A huge circle, seems like to me — a simpleton.”

All excellent questions. Not new, by any stretch, but still excellent.

As Bob sees it, it comes back to the dictum attributed to Aristotle: Nature abhors a vacuum.

“Per the laws of nature and physics, every empty space must (and will) be filled with something. Ask any farmer what happens to open ground that isn’t tended to. Something is going to fill it. Within a few days, weeds… burrowing animals… debris from trees and bushes… they’ll all begin to consume the void.”

And so it goes in financial markets. “A growing contingent of the population believes the U.S. dollar is being manipulated by unelected forces, primarily the Federal Reserve and other central banks around the world.”

And why not? “The dollar has now lost 99% of its value against gold since the Great Depression. And given the trillions in COVID-19 stimulus last year, the U.S. money supply (M1) rose another 70%.

“As trust in the greenback eroded, a vacuum formed.

“To fill the void, a new form of currency is now here — Bitcoin — that (theoretically) lies beyond the reach of government’s invisible hand,” says Bob.

Public perception of Bitcoin has shifted radically in only three years.

In late 2017–early 2018, the craze for “initial coin offerings” drove Bitcoin to a peak near $20,000. It was a get-rich-quick mini-mania, the sort of thing that happens routinely amid times of relative prosperity.

Now? Amid a pandemic, political polarization and an atmosphere of crisis?

Three years ago, it would have been loopy for JPMorgan Chase to declare $146,000 Bitcoin a possibility. Now it barely generates headlines.

Bitcoin has evolved from “instant effortless riches” into a potential digital safe-haven asset alongside precious metals.

Bob’s takeaway: “I believe Bitcoin is here for the long haul. But since it’s still trying to figure out exactly what it is… what purpose it serves for society… and what governmental regulations it will face (if any)… until those answers become clear and obvious, we’ll continue to see wild price swings and uncertainty in the market.

“Plus, we also don’t know how Bitcoin will respond during a major geopolitical crisis, as it hasn’t been tested during such circumstances yet.”

With that much uncertainty, a Bitcoin investment has to be for the long haul — and only with funds you feel you can afford to lose.

Not your speed? It so happens that Bob has identified a subniche of the stock market that gets precious little media attention… and is home to some of the fastest-moving stocks we’ve ever seen.

Access is strictly limited. We can accept only 250 new readers today, for reasons you’ll see when you follow this link.

“The S&P and Dow have now rallied for six consecutive sessions, so I think it’s safe to say the averages are short-term stretched at the moment,” says chart hound Greg Guenthner as we turn to today’s market action.

All three of the major indexes touched records yesterday. As we write this morning, the S&P and the Dow are barely in the red, while the Nasdaq is up another quarter percent, past 14,000.

The mood of small business is as glum as it was during the hard lockdowns of May — at least according to the latest Optimism Index from the National Federation of Independent Business.

The index slipped from 95.9 to 95 in January — a level lower than any guess among dozens of economists polled by Econoday. It’s also three points below the index’s long-term average going back nearly 50 years. 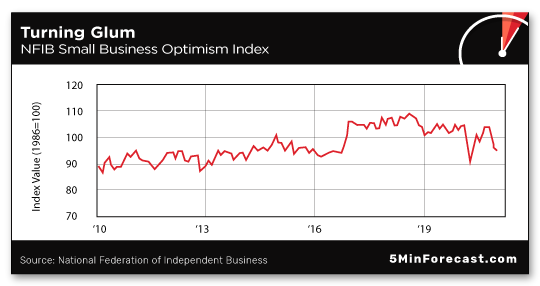 Expectations for better times over the next six months are now the lowest since late 2013.

Asked about their single-most important problem, 21% of survey respondents say it’s finding qualified help. Close behind is taxes, cited by 19%.

One of Japan’s major automakers is taking “remote work” to a whole new level. 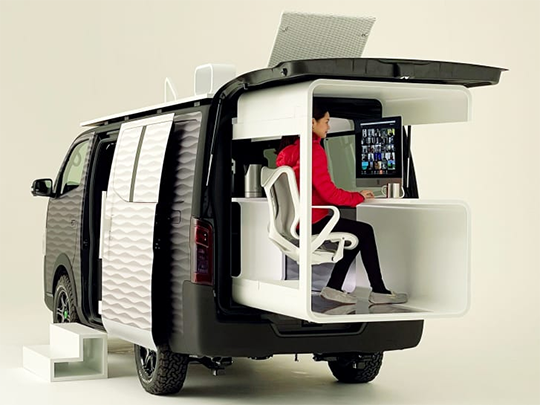 From CNN: “Inspired by the new realities of the COVID-era, Nissan’s concept vehicle features a retractable office for remote workers and digital nomads.

Interesting… but it doesn’t look like the most spacious thing and we’re racking our brain trying to figure out how you could live the carefree go-anywhere life without space for, you know, living quarters.

Maybe if you have a spouse or partner, you can caravan, with one vehicle for “home” and this thing for “office”?

To the mailbag, and back to the topic of a federal $15-an-hour minimum wage…

“Increase the minimum wage and the govt also gets to pocket more in taxes,” a reader writes. “Nobody seems to mention that.”

Writes another: “One argument for a higher minimum wage I seldom see is that of the earned income tax credit.

“I used to work for H&R Block and volunteered for the AARP’s Tax-Aide program. In both venues I would assist tax filers in claiming the EITC. Many filers would look forward to this process so they could receive additional income to pay bills and purchase goods and services that were beyond their means most of the time.

“In most instances, those with a couple of kids would be the beneficiaries of several thousand dollars in EITC ‘refunds.’ My point? As taxpayers or fast-food customers, we will pay extra for a higher minimum wage anyway. So why should we let employers who pay their employees $7.25 an hour off the hook so their employees can claim the EITC instead of a higher wage? The EITC is really an employer subsidy.”

The 5: That’s been the knock against Walmart and the like for a long that with everyday low wages, they’re taking a free ride not only on the EITC but also SNAP, Medicaid and so on.

Anyway, the Congressional Budget Office just issued a study that concluded a $15 minimum phased in by 2025 would give raises to 27 million Americans… but also put 1.4 million Americans out of work.

The study also concluded the budget deficit would actually widen a bit… because employers would pass along their higher wage costs in the form of higher prices, and those higher prices would translate to higher federal spending.

But the discussion might be academic at this point. As the president told CBS News over the weekend, the Senate’s “reconciliation” rules are such that a minimum wage increase probably won’t make it into the “stimulus” bill. “I don’t think it’s going to survive,” he said.

Then again, the “fight for $15” is already won in 20 states and 32 cities and counties. Heck, a phased-in $15 minimum passed by referendum in Florida last November — a state Donald Trump also carried comfortably. Go figure…

P.S. Shout-out to readers of The Profit Wire, who booked 100% gains this morning on Teva Pharmaceutical Industries. That’s a clean double in two months.

The Profit Wire was far and away our most popular service last summer and fall — until we had to observe a strict subscriber cap and close it off to new readers.

The good news is that new slots will open up in the weeks ahead. Watch this space.