Showing up the Shorts

The House Committee on Financial Services convened Thursday (virtually, obvs) for a five-hour hearing on the Reddit/GameStop mania.

And just in case they needed a primer on WallStreetBets jargon… 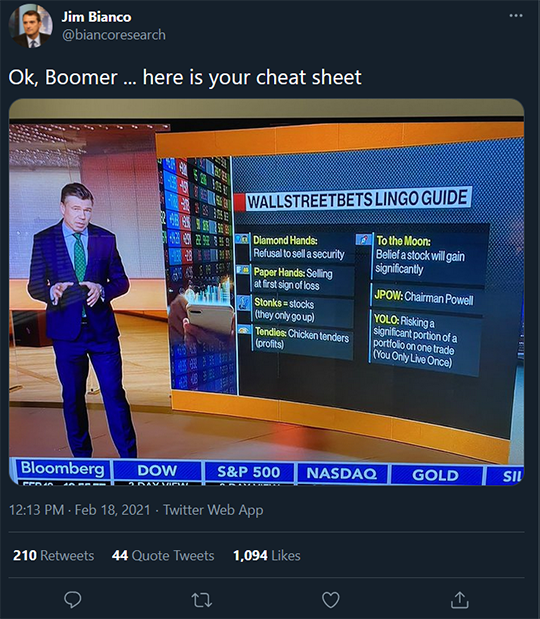 Nonetheless, politicos relished the opportunity to chew out the likes of Citadel CEO Ken Griffin, Reddit co-founder Steve Huffman and Robinhood’s Vlad Tenev for hanging retail investors out to dry.

Oh, and then there’s this guy…

GameStop enthusiast Keith Gill goes by a couple aliases: On his YouTube channel, Mr. Gill is known as Roaring Kitty. And the headband and “Hang in There!” poster are part of his schtick. 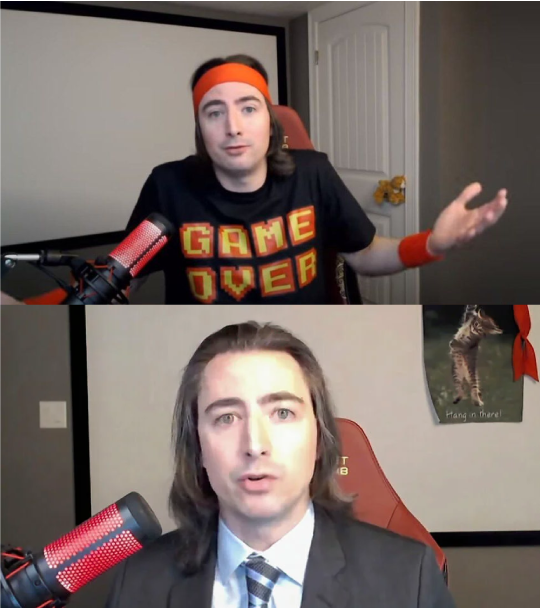 Before and after: “I am not a cat,” he clarified for Congress. *Smirk*

On Reddit’s WallStreetBets, Gill’s handle is DFV, which stands for DeepF-ingValue. And he’s developed quite the following.

So much so, the 34-year-old is accused of being a GameStop-frenzy ringleader…

“Gill reaped a big profit in the troubled video-game company after months talking about GameStop stock,” says an article from The Associated Press.

“On Thursday he rejected suggestions that he played a key role in the GameStop frenzy, arguing his social media conversations sharing analysis of company fundamentals were no different than what people do at bars, golf courses or with family members at home.”

According to Mr. Gill’s written testimony: “The idea that I used social media to promote GameStop stock to unwitting investors and influence the market is preposterous.

“My posts did not cause the movement of billions of dollars into GameStop shares,” he concludes.

But a congressional “scapegoating” is just the beginning for Roaring Kitty…

“Gill is now facing an investigative inquiry from a Massachusetts state regulator and a class-action lawsuit claiming he misrepresented himself as an amateur investor while convincing other investors to buy GameStop shares,” the AP says.

The argument being Gill was, at one time, a registered broker-dealer at MassMutual, where his job title was “financial wellness educational director.”

Gill counters that his stock and trading analysis at WallStreetBets was a hobby he picked up to supplement his income.

A claim one supporter confirms on Reddit: “You did your homework for years, learning about the market and understanding what your strategy would be, all while taking care of your family and no doubt just being an all-around good dude through some incredibly difficult times since ’08.”

(All of which reinforces The 5’s premise when we delved into the epicenter of the GameStop financial-cultural-social earthquake and its connection to millennials still smarting from the Panic of 2008.)

We’ll let you know if anything comes of [Plaintiff] v. Roaring Kitty…

“The culprit was a short squeeze.” Left exposed? “Positions of Citadel LLC and a hedge fund company working with Citadel called Melvin Capital,” Ray says. “And none other than Citron Research.

“Citron Research publishes reports on various publicly traded companies. They claim to have a track record of identifying fraud and failing business models,” says Ray. But Citron might be biased: “They disclose they may own positions in the companies they write about.”

So Citron pegged GameStock as one stock to short… and took its own advice. But after retail investors piled into GME, Citron scrambled to close out its short position. (Citron has since announced it will only offer analysis on long positions going forward… heh.)

“Short research has a place in the market,” Ray concedes. “But sometimes, taking a position opposite the shorts can prove profitable too.” And Ray’s not talking about “garbage” stocks, including GME…

“I recommended picking up shares last March after speaking to Inovio’s CEO about his conversation at the White House,” he says. “Readers who acted are currently sitting on 74% gains.” (Emphasis ours.)

“Companies like Citron get it right from time to time,” says Ray, “and short research is valuable and has a place in the market. But you should always work out if what you’re reading is biased.”

Ray and his team? “We pride ourselves on providing 100%-unbiased research. We do not make money, long or short, on the companies that we write about in these pages.”

In the case of Inovio: “I got the CEO on the phone,” says Ray. “I dug deep into the technology. When I was satisfied I had a company on the verge of a breakthrough, I wrote up my research.

“And in the end,” Ray says, “the short sellers only gave us a better entry point — and more profits as a result.”

[Note: Ray’s readers subscribe because they want the most current, unbiased stock research. And with Ray’s Inovio Pharmaceuticals recommendation — now up 74% — he provided just that… even defying conventional analysis.

More recently, Ray revealed something on camera that’s already racking up thousands of views. And because of its time-sensitive nature, you’re encouraged to move quickly on this $2 grubstake opportunity.]

Turning to the market today, the Dow’s (weakly) giving it up for Yellen’s promise to keep the “stimmy” juice flowing…

The big economic number of the day is red-hot: The “flash PMI” surveys for February ring in at 58.8. (Anything over 50 indicates growth, numbers approaching 60 are as good as they get.) The manufacturing component is 58.5; services, 58.9.

Econoday channels the conventional wisdom: “The flash PMIs raise the volume knob on the now fully emerging question: Is the economy moving too far, too fast?”

With 10 million fewer jobs than at this time a year ago? Seriously?

“The skyrocketing value of Bitcoin… has come back to bite those who bought their cars years ago with the ever-fluctuating digital currency,” says an article at The Drive.

“One of the first cars purchased with Bitcoin was a Toyota Prius. Owner Michael Tozoni acquired the fuel-sipping Toyota back in 2013 after Bitcoin experienced a rather volatile year, shelling out 1,000 BTC for the car. 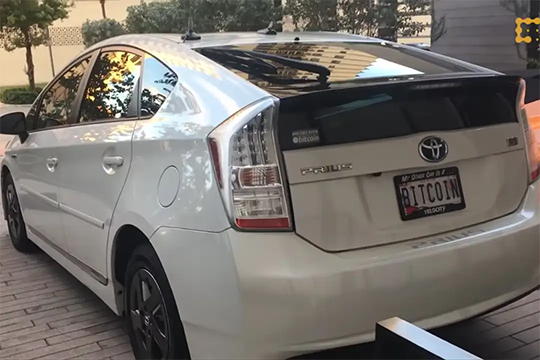 Most expensive car in the world?

By December 2013, Mr. Tozoni might have been experiencing some buyer’s remorse when his Bitcoin would have been worth $120,000.

In 2019, Tozoni went on record saying he had no regrets about coughing up Bitcoin for the Prius. But something tells us he might be having second thoughts now…

To the mailbag, where a reader comments on Team Biden’s plan to raise tax rates…

“You may not be old enough to remember, but this brought to mind the Reagan-era tax reform where rates were lowered but revenue was expected to hold up due to elimination of numerous deductions and ‘loopholes.’ However, with little fanfare, most of the loopholes were re-introduced over a few years, perhaps under a different name or stated purpose.

“(Notably, one of the deductions that was saved was mortgage interest on not one, but two residences. Curious how many ordinary folk have two houses? But then again most members of Congress probably do with one in D.C. and one back home. But I digress…)

“My point is that closing loopholes is a great idea, but I hold little faith in any long-term strategic effect on revenue. They may pass with a lot of political hoopla, but I expect they will probably be similarly reinstated over time by the lobbyists, who write most proposed legislation sponsored by the corporate cronies who fund the D.C. political machine.”

And we hear from a reader in the Lone Star State: “As one might expect, there is a lot of discussion and finger-pointing here in Texas as people freeze in the dark (a borrowed phrase from the ’80s).

“Ultra-sensitive liberals are squealing that ‘green energy is not the cause of this power problem!’ The other side (whoever they might be) is screaming for more coal, natural gas and nuclear power. Each side is linking to different newspaper articles as ‘proof’ for their case.

“Completely by happenstance, I stumbled upon some testimony before the U.S. Senate earlier this month from Dr. Scott Tinker (director, Bureau of Economic Geology; University of Texas at Austin).

“His opinion should be considered whenever a complex topic like climate change and green energy is being discussed. He makes a distinction between what is ‘factually complete, not just completely factual.’”

The 5: Texas’ power outages have been quite the lightning-rod topic this week. So we’ll follow our reader’s advice and let Dr. Tinker debate the merits (or demerits) of various electricity sources…

“All sources of electricity have different capacity factors, which measure actual output/maximum possible output,” he testified before the Senate on Feb. 3. “The higher the capacity factor, typically the more efficient the power plant.

“Nuclear has the highest; hydro, natural gas and coal have the next highest; and wind and solar have the lowest.

“For example, 100 GW of new solar capacity will generate less than half of 100 GW of new coal capacity. This is just the reality of intermittency due to night, clouds and nonwindy times.”

Just the reality, folks… Try to have a good weekend. We’ll be back Monday…

P.S. There might be one key piece of the Tesla story that the media aren’t reporting…

And according to Ray Blanco’s research, this under-the-radar company might deliver unprecedented gains to everyday Americans… Potentially as high as 1,000% in the next three months.

Ray covers all the details on camera, but you can get access for a limited time. Be sure to watch before his presentation goes offline.