“Launched in late February, the service uses an AI technique called deep learning to automatically animate faces in photos uploaded to the system,” The Guardian says.

And Twitter users have gone wild with the Deep Nostalgia free trial, experimenting with images from video game covers and Michelangelo’s David to even the lamentable bust of soccer hunk Cristiano Ronaldo.

It isn’t for everyone, though, MyHeritage concedes: “Indeed, the results can be controversial… [but] it’s hard to stay indifferent to this technology.”

“Your phone or virtual assistant device can read your voice and set reminders or look up the weather for you,” Ray says. “When you commute to work, an optimal route is found if there’s an accident or traffic on your normal drive.”

And it’s AI that queues up your new favorite products on Amazon or your next binge obsession on Netflix. “Twenty years ago, this would be considered science fiction,” says Ray. “AI is only getting better, faster… and also a little bit terrifying.

“The thought of AI being everywhere, logging our data and replacing our jobs is unnerving,” he says. “But there are a lot of reasons to embrace AI.

“AI is getting better at connecting the dots on data and making companies more efficient and more profitable,” Ray notes.

“Whether it be tweaking the supply chain for a manufacturer to get products to a consumer or helping a company understand better marketing and sales — companies in every sector are integrating AI systems into their workflow.

“In agriculture, for instance, Microsoft’s Azure hopes to achieve better harvests faster by analyzing over 30 decades of climate data,” says Ray. “The end product allows them to determine the optimal time to plant, the ideal sowing depth, how much manure to apply and more.

“Another major issue in agriculture is food waste. It’s estimated that a third of all food produced is wasted annually — over 1 billions tons,” Ray says. Once again, Azure’s AI helps “detect temperature fluctuations in storage tanks and trucks,” alerting farmers and truckers to prevent food spoilage.

“It’s a no-brainer that AI, robotics and data analysis are going to be a huge trend this decade,” says Ray. So how can investors profit from the AI boom?

“A good way to get full exposure to this trend is through the Global X Robotics & Artificial Intelligence ETF (NASDAQ: BOTZ),” he says. “The last six months especially have seen an amazing upward trend that you would be foolish to ignore… 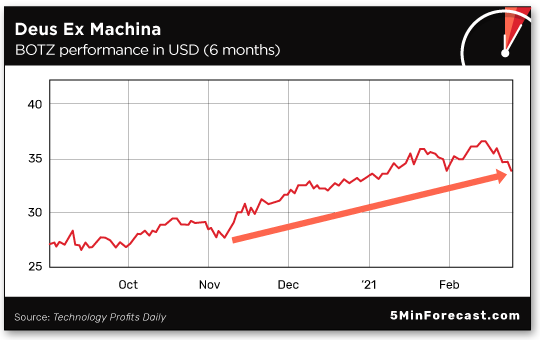 “BOTZ is an ETF that holds companies heavily involved in… AI sectors,” says Ray. “This includes robotics and electronic companies, semiconductor manufacturers and those involved in AI development.”

Ray cautions: “If you’re considering adding BOTZ to your portfolio, exercise the same caution you would on any trade.” And concludes: “Even with market volatility we’ve seen recently, we see a clear upward trend for the AI sector.”

Ray Blanco agrees: Most are in the dark when it comes to a crucial part of the Tesla-EV story. He’s convinced a tiny $2 battery company, founded by a former senior Tesla battery engineer, holds the key to Tesla’s ongoing dominance… A technology that’s already protected by patent application No. 3069168.

And if Elon Musk announces a partnership with this tiny company? Outsized gains are all but certain. Which is why Ray went live, breaking down the situation he sees unfolding… Link here to the details of this fast-moving situation.]

Per the semiconductor shortage we’ve been following, GM announced it will extend shutdowns at three plants in Kansas, Mexico and Ontario, Canada. “GM previously said the North American plants would be closed until at least mid-March,” CNBC says. “The… Mexico [plant] is now scheduled to be down through the end of March, while the U.S. and Canada plants will be shuttered until at least mid-April.”

“The huge service side of the economy grew more slowly in February,” says MarketWatch. According to the Institute for Supply Management’s survey of service-oriented businesses, the index hit a nine-month low of 55.3%, down from 58.7% in January.

“Readings above 50% signal that businesses are expanding, and numbers above 55% are usually a sign of broad strength,” MarketWatch notes.

To blame? “Lingering disruptions in business operations in the U.S. and abroad caused by the pandemic… Many companies are facing sharply higher prices for now-scarce materials that are limiting production or forcing them to find less costly alternatives.”

As the Senate prepares to hash out the House-approved $1.9 trillion stimulus package, no-strings attached federal aid to states is still up for grabs.

“As it turns out, new data shows that a year after the pandemic wrought economic devastation around the country, forcing states to revise their revenue forecasts and prepare for the worst, for many the worst didn’t come. 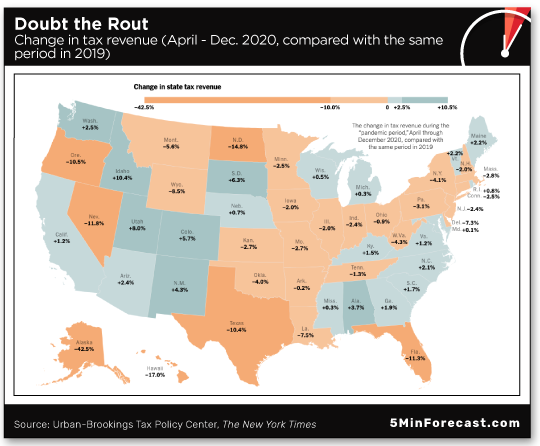 (What a departure from the Great Recession when the federal government supplemented state unemployment insurance with payments of $25 per week!)

Dan White of Moody’s concludes: “If the COVID-19 pandemic had occurred even five years earlier than it did, the impacts to state and local sales taxes would have been truly devastating.”

We called her a “deficit hawk” — kinda — in December when we profiled Tanden, HRC protégé and president of the Center for American Progress.

Tanden was also a lightning rod for controversy because of her Twitter habits, regularly blasting the likes of Bernie and his bros. And while she deleted 1,000 of her most outrageous tweets after Biden nominated her, the damage was already done…

“During her confirmation hearing, Tanden was questioned about her past tweets, which included comparing Senate Minority Leader Mitch McConnell (R-Ky.) to the Harry Potter villain Voldemort, and writing that ‘vampires have more heart’ than Sen. Ted Cruz,” CNBC says.

After weeks of scrutiny, Tanden submitted a letter to the president, saying: “I do not want continued consideration of my nomination to be a distraction from your other priorities” while acknowledging “no path forward to gain confirmation.”

Vanity Fair harrumphs: “Republicans have succeeded in ensuring that no one who has sparked an inane Twitter feud or said anything mean about lawmakers will ever be in a position of power in the United States government.”

But the story’s not over for Tanden — Biden promises to find her a position in his administration. No clarification yet…

Wanna get away? The pandemic spurred sales of used business jets in 2020…

With the literal jet set trying to circumvent the perils of pandemic air travel — and avoid the unwashed masses — a private jet seemed just the thing last year.

But according to AVweb: “There’s been a boomerang effect in 2021 as first-time owners take stock of those purchases.” The harsh realization? “Private jets are the gifts that keep on taking, even when they’re not flown much.” (That’s some next-level buyer’s remorse.)

Business jet broker Janine Iannerelli of Par Avion Ltd. finds many recent buyers have been “misadvised” and “misled” about the demands of jet ownership. “When I start down that path of trying to educate them, they are absolutely shocked,” she says.

Startup trading platform Public tapped singer Michael Bolton to shade Robinhood with a parody of Bolton’s 1989 hit “How Am I Supposed to Live Without You?”

“Nevertheless, he alludes to accusations that Robinhood sells ‘order flow’ to big hedge funds like Citadel Investments who execute trades for mom and pop investors despite allegations that their financial interests aren’t aligned with them.” 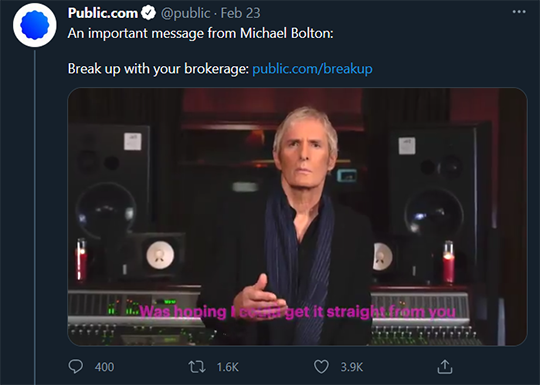 “How am I supposed to trade without you?” Bolton croons, and concludes his pitch for Public with the lyrics “I think it’s time I must be moving on/Gonna transfer all my stuff and I’ll be gone!”

But the real question: why Michael Bolton? According to Reuters, the average age of Robinhood users is 31, born in 1990… or one year after Bolton’s hit. Maybe mom and dad were grooving to it…

We’ll be back tomorrow. Take care!

P.S. According to Ray Blanco’s research, if Tesla announces a partnership with this under-the-radar battery company, it might deliver incredible gains to everyday investors…

Potentially as high as 1,000% in the next three months!

That’s why Ray recorded a presentation packed with all the information you need to hop on this time-sensitive opportunity… but you’ll need to watch before it’s taken down.