If mainstream financial media are to be believed, all of Wall Street’s operating assumptions since the Panic of 2008 have been flipped on their head.

The narrative we’ve been fed for the last couple of weeks goes like this: Markets are starting to freak out about signs of accelerating inflation — and they’re looking for the Federal Reserve to at least give lip service to “tightening” monetary policy sometime in the future. Instead, the Fed is still pedal-to-the-metal with its money printing.

And so bonds are selling off, which has the effect of pushing up interest rates. Higher interest rates make U.S. Treasuries more attractive relative to dividend-paying stocks… and thus money flows out of stocks and into bonds. So the stock market is selling off too. 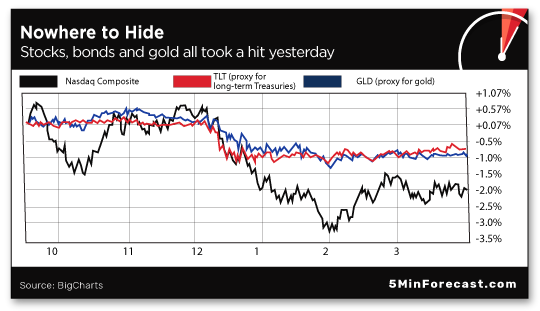 At one point, the Nasdaq was down 3% on the day, ultimately closing down 2%. The other big U.S. stock indexes slipped more than 1%, adding to their recent losses.

But no major asset class was immune; with rising rates, Treasuries fell (again)… and gold tumbled below $1,700 for the first time since June.

After we went to virtual press yesterday, Fed chair Jerome Powell did a livestream interview for The Wall Street Journal. It didn’t really make any news, because he didn’t alter his pedal-to-the-metal stance: “Today we’re still a long way from our goals of maximum employment and inflation averaging 2% over time.”

But because he didn’t give lip service to trimming the Fed’s balance sheet or raising short-term interest rates… the mainstream narrative is he did nothing to allay those inflationary fears. Thus, the sell-off and volatility.

If the mainstream wants to memory-hole everything that’s happened over the last 12 and a half years, that’s their business. But it’s a profound disservice to the truth and to your financial well-being.

Because for the last 12 and a half years, it’s the Fed’s pedal-to-the-medal that’s been fueling the stock market.

For instance, there was the “taper tantrum” in the spring of 2013, when Ben Bernanke floated a trial balloon about the Fed reducing or “tapering” its balance sheet.

More recently, in late 2018, when the Fed actually was reducing its balance sheet… Powell said the process was on “autopilot,” with no end in sight. The stock market took a near-20% spill before he took back that remark in early 2019.

But now… after 12 and a half years of Wall Street mainlining the Fed’s heroin and dipping liberally from the Fed’s punch bowl… now we’re supposed to believe Wall Street wants to go clean and sober?

If you examine the “rising rates” thesis behind the narrative, the entire narrative falls apart.

So says our Alan Knuckman, whose 30-year floor-trading career began in the Chicago bond pits — so he knows a thing or two about interest rates.

But rewind just a couple of years to Powell’s “autopilot” remark in late 2018: The yield had zoomed up from record lows to well over 3% in a little over two years. The mainstream narrative then was that rates still had nowhere to go but up.

Instead, it was all downhill from there — clearing the way for the stock market to resume its epic rally. 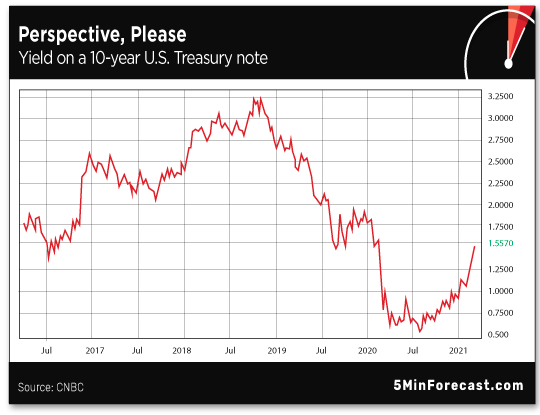 Point being, “This bounce from the bottom last summer had to be expected unless negative interest rates were a serious reality” — which they weren’t. The Fed isn’t that desperate.

The “nowhere to go but up” mantra quickly fell apart in early 2019… and Alan says it will fall apart again. With falling longer-term rates, stocks become the place to be once again.

How does he know? Because he’s among the few market veterans who still pay attention to the eurodollar market. Eurodollars are dollar-denominated accounts in foreign banks and foreign branches of U.S. banks.

Over the decades, short-term interest rate futures in eurodollars have been a reliable gauge of where the Fed is likely to steer its policy. This gauge tells us the Fed is likely to leave its benchmark fed funds rate near zero until 2023… and raise it in teensy half-percentage-point increments until it reaches 2% in 2026.

What’s the significance of 2%?

Ah, yes — back then, the mainstream was likewise freaking out about an impending recession and bear market. Instead, “the crisis du jour was overcome by a record rally in stocks.”

Bottom line: Despite the mainstream blather, Wall Street will continue operating on all its post-2008 assumptions: “Everything remains the same as it has been for the last decade-plus,” says Alan — “when ultra-low rates make stocks super attractive in the chase for yield as the only choice.”

[Ed. note: If you’re looking to goose your stock market gains, you really need to check out Alan’s flagship trading service. It’s been on an unprecedented streak — 77 winning trades — and his next recommendation is due first thing Monday morning. Access here.]

None of what we’ve described today means the sell-off is over, however.

The monthly job numbers won’t do a thing to dissuade Jerome Powell and company from keeping the pedal to the metal.

Recall how we related last week that Powell no longer considers the official unemployment rate a reliable yardstick for setting policy — because the number ignores legions of people who’ve given up looking for work in the last year.

So while the media play up the February rate clocking in at 6.2% — down a hair from the month before — it’s profoundly misleading.

Of more interest to the Fed is that the wonks at the Bureau of Labor Statistics conjured 379,000 new or revived jobs for February — about three-quarters of them at restaurants as the latest wave of state lockdowns was easing.

The good news is the number is way higher than expected. The bad news — and the news the Fed will pay heed — is that the job losses from the 2020 recession are still just as bad as the worst of the job losses from 2007–09. You can see it clearly on the big chart from Calculated Risk, plotting the job losses and recoveries from every post-World War II recession. 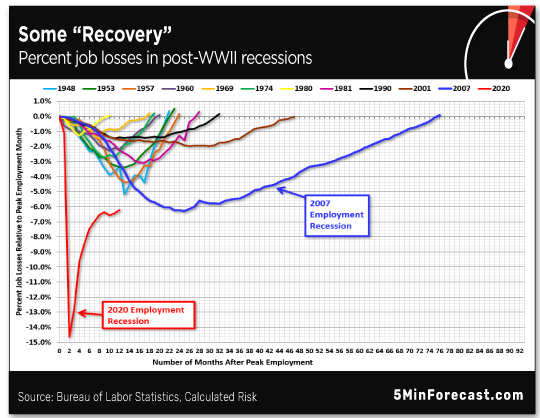 The real-world unemployment rate from Shadow Government Statistics — which does account for people who gave up looking for work, along with part-timers who’d like a full-time job — actually inched up to 25.8%.

The week brought another brick-and-mortar retail bankruptcy — but not before the company, by one account anyway, intentionally stiffed a lot of its small-fry suppliers.

Paper Source sells stationery, greeting cards and whatnot. Under Chapter 11 reorganization, the company plans to close at least 11 of its 158 stores.

The filing comes on the heels of the firm putting in “lots of large orders with over 250 small independent companies knowing that they wouldn’t have to pay for the inventory after the fact,” alleges Janie Velencia.

Ms. Velencia runs a Washington, D.C.-based card and tchotchke maker called The Card Bureau. She says Paper Source ordered more product from her over a 60-day span than it did for all of 2020. 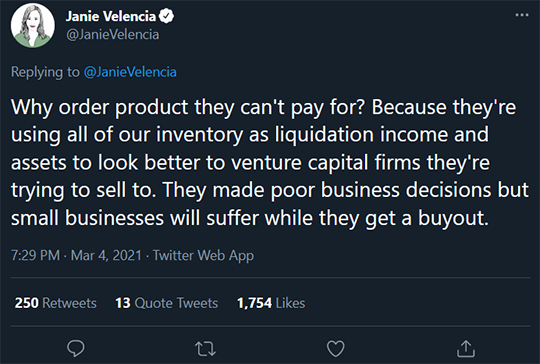 “Small business will be the last in line after everyone else they owe money to,” she says. And that’s only on orders placed 20 days before the filing. Any earlier and “there’s no possibility of seeing any of those payments.” Not the way she reads the filing, anyway.

Velencia knows she’s taking a risk by airing her complaint on social media… but she figures she’s on safe ground because under the reorganization Paper Source will continue placing orders and “we will get paid for new orders on net 60 terms.” Oy…

Stupid state lawmaker tricks: The Utah legislature plans to impose requirements on the tech industry that will be physically impossible to meet.

Under a bill that passed the state Senate yesterday, the makers of smartphones and tablets must install anti-porn filters.

Get this passage from The Salt Lake Tribune: “State Sen. Jake Anderegg told his colleagues that the proposal won’t work because it tasks manufacturers with turning on the filters — even though the software to do so hasn’t yet been loaded onto the devices. The option to activate the adult content blockers isn’t available until further down the supply chain, he said.”

But Anderegg voted for the bill anyway because “it sends a good message.”

Oh, so if it makes him feel better, then it’s all right?

Not that the bill is toothless. “Manufacturers may face civil liability if they don’t comply,” reports Utah’s CBS affiliate.

Sorta wish we could be a fly on the wall at Apple and Google as they discuss how they would comply. It’s not a theoretical question; the bill is on its way to the governor’s desk.

The employment hotspot of the country right now is a place Wikipedia describes as “a combined store with gas pump and post office (closed in 1998), and a couple of houses.”

Thanks to the remote-work phenomenon, and the vagaries of internet job listings… well, we’ll let one Brian Feldman explain it on his Substack site, seeing as he ran across it amid his own job search.

“Most jobs are tied to a physical location, despite having no reason to be, so the listing usually says where the job is, geographically. Because of recent events, more and more listings are listing their location as ‘Remote.’ For the listing aggregator sites like LinkedIn or Monster or Indeed, that means there are a lot of jobs in Remote, Oregon. The scrapers see the location as ‘Remote,’ and they plug that into a database and tie it to a town in Oregon.” 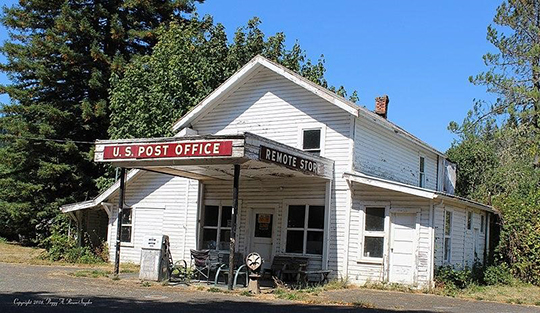 On the Wikipedia description, you find the following line: “The city has become a placeholder on job boards to represent if a position is a remote-work position.”

Here’s the weird thing: Mr. Feldman looked at the edits and found that sentence was added at 3:12 p.m. EDT on March 12, 2020 — a day before President Trump declared a national emergency and several days before the earliest stay-home orders.

Were the “remote work” listings already populating those websites?

And on that slightly spooky note, we bring the week to a merciful close.

It could have a huge positive impact on your life — starting as soon as the market opens Monday morning. You can watch it right here.