The $1.9 trillion spend-a-palooza is this close to becoming law.

The House is set to pass the Senate’s final version of the bill as early as this evening. The aim is to get it signed into law well before Sunday — when the current round of expanded unemployment benefits is set to expire.

The media coverage on both sides of the partisan divide has been bizarre. And so it’s left to us to convey the real story.

When the Senate passed the bill on Sunday — landmark spending legislation by any measure, to be sure — conservative outlets buried the story.

The Daily Caller and the Washington Examiner, among others, were focused more on the scandals of New York Gov. Andrew Cuomo. National Review was more interested in China-bashing. Breitbart was busy raising expectations for 2024 vote fraud. Fox News was obsessed with the Harkles.

Surprised? You shouldn’t be. We took note in mid-2019 when the late Rush Limbaugh brushed off any concerns about runaway federal spending: “Nobody is a fiscal conservative anymore,” he said. “All this talk about concern for the deficit and the budget has been bogus for as long as it’s been around… We’re still here, and the great jaws of the deficit have not bitten off our heads and chewed them up and spit them out.”

Well, not yet, anyway. (Brings to mind John Maynard Keynes’ infamous quip about “in the long run, we are all dead” — it certainly worked out that way for El Rushbo.) 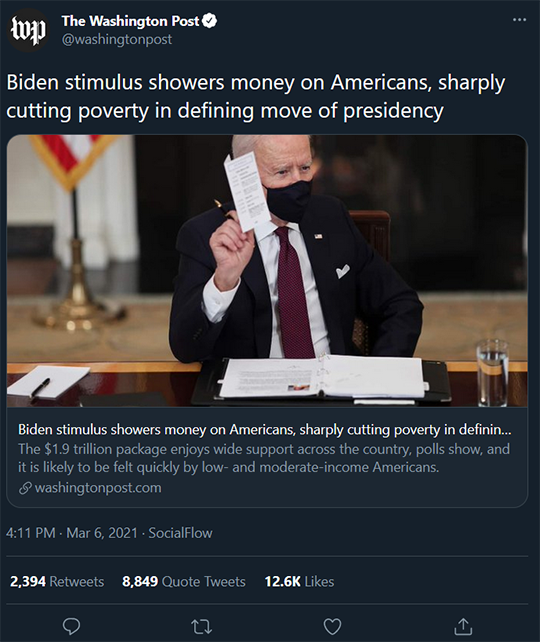 Reality check: “Only about 1% of the entire package goes toward COVID vaccines, and 5% is truly focused on public health needs surrounding the pandemic,” says Maya MacGuineas, president of the nonpartisan Committee for a Responsible Federal Budget.

“Meanwhile, nearly half of the package will be spent on poorly targeted rebate checks and state and local government aid… More than 15% of the package – about $300 billion – is spent on long-standing policy priorities that are not directly related to the current crisis.”

Among the most outrageous line items…

The fawning corporate media try to paint these nonpandemic priorities as “the White House’s first stab at reducing income inequality and poverty,” as the Financial Times puts it — “entrenched problems that have been exacerbated since the coronavirus hit.”

So how does that explain the $500 billion, give or take, for those $1,400 “stimmy” checks — much of which will go to people who have not lost jobs or income?

“There is no reason for Congress to be sending checks to families that earn six-figure incomes and have experienced minimal financial losses due to the pandemic,” writes Eric Boehm at Reason.

And what gives with the arbitrary income cutoffs? If you’re a couple earning less than $150,000 a year, you’re entitled to the full amount. Beyond that it starts phasing out… but the phaseout looks more like a cliff dive: Over $160,000? No JoeBux for you.

“If putting more money in Americans’ pockets is a priority for Congress,” Boehm goes on, “it should accomplish that goal by reducing income taxes (and cutting an equal amount of future spending) on a permanent basis, not by engaging in deficit-hiking games merely because ‘free’ money from the government is politically popular.”

But this round of spending is just the beginning.

Remember what Jim Rickards said in this space last month: Democrats might well have only two years in which to implement their agenda before one or both houses of Congress flip back to the GOP. Clock’s ticking.

New York Times columnist Paul Krugman just floated a trial balloon for what’s next: He fully expects a “Biden boom” thanks to the present legislation… and then the economy quickly stalls out again as the sugar high wears off. What then?

Another sugar jolt, of course!

“The answer is actually obvious: a large program of public investment, paid for largely with borrowing, although with a case for new taxes, too, if it’s really big. Such a program would do double duty. Macroeconomics aside, we need to spend a lot to rebuild our crumbling infrastructure, fight climate change and more. And public investment can also be a major source of jobs and growth, helping to pull us out of the stagnation trap.”

Anyway, it’s easy to imagine some meaningful portion of those $1,400 checks finding their way into the stock market. Like last year, but bigger. Give it enough time and eventually, the corporate media’s “bubble” babble will be justified. But not now…

No sooner did the Nasdaq enter “correction” territory than it’s staging a spectacular recovery.

“Always a possibility that this is another fake recovery that gets sold like we saw on Friday,” cautions our chart hound Greg Guenthner.

But the “economically sensitive” commodities are on their heels. Crude has shed nearly a buck to $64.09 a barrel… and copper is only three pennies away from falling back below $4 a pound.

With the freakout about rising interest rates apparently done for now, a quick note about rates and gold…

There’s a conventional wisdom we’ve heard in recent weeks about how rising rates are bad for gold. As the theory goes, gold has no yield and thus investor money departs gold and moves into bonds as interest rates rise.

Which is true — up to a point.

We turn to our friend Chuck Butler, still holding down the fort in his Daily Pfennig e-letter: “I had a dear reader ask me if yields continue to rise will they be the death knell for gold… And I replied, ‘Well, if rates are rising because the economy is running on all eight cylinders, then gold could suffer… But if rates are rising in reaction to rising inflation, à la the ’70s, then gold should bask in the sun with a plethora of buying’…

“Whenever someone tells me that gold can’t survive in a high interest rate environment, I point out the 1970’s,” says Chuck — “Treasury yields were north of 15%, and inflation was running very high, and gold… it had one of its best decades in its history… So don’t even begin to tell me that interest rates along can hurt the price of gold…”

Exactly. At the moment, the economy isn’t exactly running on eight cylinders. Rather, it swapped out an eight-cylinder engine for something stripped from a four-engine econobox. But the econobox engine is gathering speed. This is the early stage of an economic expansion.

We can just imagine what the mainstream narrative will become in a couple more weeks — that the expansion is destined to last a decade, like the 1990s or the 2010s.

We suspect it won’t last nearly as long — that “reflation” will soon turn to “inflation” and then to another bust.

More about that in the days ahead…

The recent slump in small-business sentiment has stabilized for the moment.

The monthly Optimism Index from the National Federation of Independent Business ticked up in February — from 95.0 to 95.8. It’s still below the long-term average of 98, and we do mean long-term. The NFIB has been taking this survey for nearly 50 years.

“Capital spending has been strong, but not on Main Street. The economic recovery remains uneven for small businesses, especially those still managing state and local regulations and restrictions. Congress and the Biden administration must keep small businesses a priority as they plan future policy legislation.”

On the “single most important problem” part of the survey, finding qualified help is now the clear No. 1, cited by 24% of survey respondents. Taxes are well behind in second place at 18%.

Ordinarily we wouldn’t give a fig, except the old guy was named Peter Foot and the new guy is named Terry Boot.

Really, what are the odds?

For the record: The Silence of the Lambs house has cleared the market.

We mentioned last October that the Queen Anne-style home used for exterior shots in the 1991 horror flick was up for sale, asking price $298,500.

While the movie is set in Illinois, the “Buffalo Bill” house is in Perryopolis, Pennsylvania — about an hour south of Pittsburgh. Four bedrooms, 1.76 acres along the Youghiogheny River. And no, no giant hole in the basement.

Final selling price? $290,000. The offer was accepted in late January. 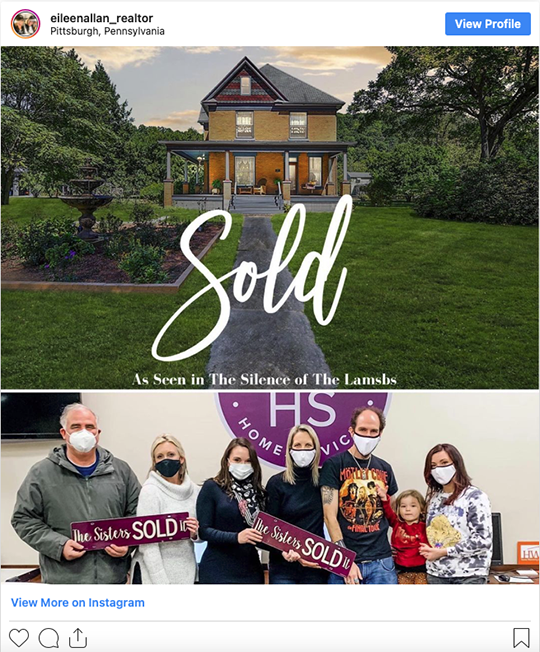 Congratulations to all concerned. We just wonder if anyone celebrated with a nice Chianti…

“Yes, remote work has been a thing for quite some time, particularly in the IT area of life,” writes a reader who took note of the odd quirk of online job listings in “Remote, Oregon.”

“Since about 2005, many larger companies started adding remote-access capabilities, which started opening the doors for IT workers to ‘work from home,’ which later became ‘remote work.’ =)

“Love your newsletters, and I very much appreciate the humor you add. It’s refreshing!”

The 5: Sounds as if you’ve been at it a lot longer than I — and I took up the life years before anyone heard of a novel coronavirus emerging in Hubei province, China…

P.S. If you ever thought the system was rigged — that your retail trades didn’t stand a chance against Wall Street’s lightning-speed robotrading prowess — you need to know about a system that turns the tables.

It’s the first quant-designed trading system that evens the score. Check it out right here.