Confession: Usually when it comes to investment topics, our team works hard to be weeks if not months ahead of the mainstream. But in the case of a phenomenon called “NFTs” we made it by only days… 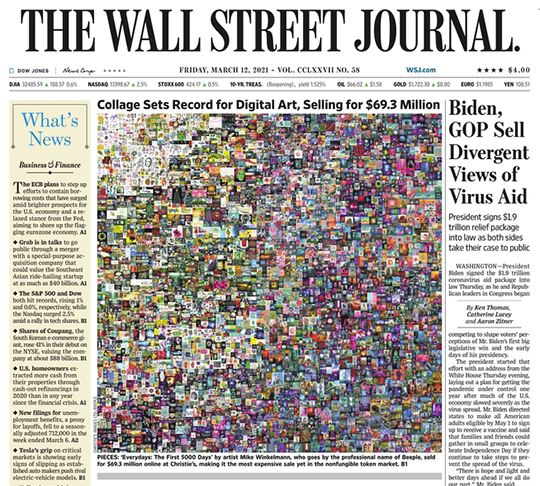 The picture splashed across the front page of the leading financial newspaper is a digital collage titled Everydays — The First 5000 Days made by an artist who calls himself Beeple.

Yesterday, this image sold at Christie’s for $69.3 million. “That’s more than anyone has ever bid for artwork by Frida Kahlo, Salvador Dalí or Paul Gauguin,” the Journal points out.

It also appears to be a record for any sort of digital asset that comes with a “nonfungible token.” You can think of an NFT as a digital certificate of authenticity.

The high bidder will receive the image and the token in his or her cryptocurrency account. The token will be recorded on the blockchain. “In the same way an artist’s signature and ownership history helps authenticate a painting,” the Journal explains, “the NFT on this $69.3 million image will ensure it remains certified in perpetuity. Copies of the same image uploaded elsewhere will not.”

OK, fine. But $69.3 million? Isn’t this just another manifestation of the Federal Reserve’s money printing bidding up everything from baseball cards to Troll Dolls?

As it happens, colleague Chris Campbell has been writing about NFTs this week in our sister e-letter, Laissez Faire Today. (This is how we can claim to be ahead of the mainstream by at least a few days, anyway. We’ll strive to reclaim our mojo.)

Actually, Chris has been on the case long before now — since at least 2018, “back when the only collections of NFTs were Rare Pepe cards and CryptoKitties. For fun, I got ahold of two of the first NFTs ever created.” 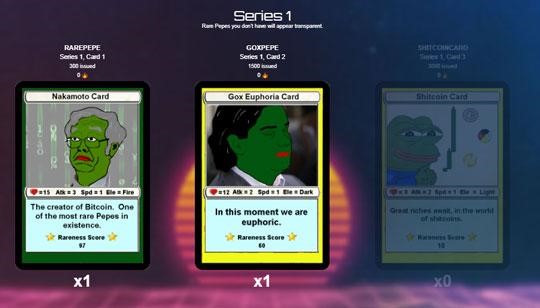 A gimmick? Totally. “But it’s fun to know you own the first shot across the bow of a potentially major tech innovation.”

Chris is making big promises on behalf of NFTs, even as he acknowledges they’re in a bubble right now. In the near term, “NFTs will cause a lot of social, political and cultural chaos — for reasons of censorship-resistance (cancel culture becomes a moot point), tax enforcement and copyright laws.”

“Nonfungible tokens are a way of proving, beyond all doubt, scarcity, uniqueness and ownership,” Chris explains in language plainer than the Journal could summon this morning.

Just as an example, going back to the day’s headline news, it’s a solution to the fraud and forgery that permeates the art world.

“Maybe Pablo made 100 versions of it and didn’t tell anyone because he thought they were all crap and someone grabbed them for a song. Maybe he didn’t even make it. Maybe it’s a counterfeit.

“If Picasso were around today, he could make an NFT doc attached to his published physical works. He could digitally sign it and bake it into the blockchain. You could prove it was Picasso’s because it would have a unique identifier on the blockchain, which could be traced back to Picasso’s unique wallet.”

If you take nothing else away from today’s episode of The 5, Chris has three bullet points for you…

But NFTs as an investment vehicle for everyday folks? Not so much. (Again, the bubble thing.) Chris has a better idea to play this trend.

“I’m not a big fan of ‘digital collectibles.’ Most of it is too gimmicky. But I am a fan of making money.”

Solution? “Look for the Golden Geese — the platforms set to win the race to dominate the NFT space.” Or, in old-economy parlance, a pick-and-shovel play.

In this case, it’s a cryptocurrency token called ECOMI, symbol OMI, trading this morning for fractions of a penny.

“ECOMI is, first and foremost, a technology company with over 100 licensing deals from the biggest brands in entertainment,” says Chris. “VeVe is ECOMI’s app and NFT ecosystem anyone can use — with dollars or crypto — to buy, trade, display and sell popular digital collectibles. The token, OMI, is the underlying distributed network that allows for peer-to-peer transactions and for ‘Golden Goose’ users to help run the network in a decentralized fashion.”

Still scratching your head? Chris says the point is that ECOMI has a huge first-mover advantage: The VeVe app is not vaporware — it’s available right now on Google Play and in the Apple Store.

“Right now, ECOMI could present a massive opportunity to turn a tiny grubstake into a king’s ransom.”

We’ll keep an eye on NFTs and their potential as time moves on here in The 5. But for the most comprehensive coverage, you really want to keep up with Chris and Laissez Faire Today if you don’t already. You can sign up to get it in your inbox six days a week at this link.

To the markets — where the establishment media are again latching onto the “rising interest rates” narrative.

The 10-year Treasury yield jumped to 1.63% this morning, another high for the pandemic era. Supposedly, that’s the reason tech stocks are selling off again, the Nasdaq down 1.25% at last check.

For crying out loud, if that number holds by day’s end, the index will still be up nearly 5% from its close on Monday.

Looking under the hood, our tech and biotech maven Ray Blanco sees no cause for alarm, rising rates notwithstanding: “Venture investor dollars certainly don’t seem to be slowing down in Silicon Valley and elsewhere. I’ve been hearing from entrepreneurs who’ve been having to turn down capital from flush VCs looking for opportunities to park their funds.

“That’s not the sort of activity you see in a risk-off environment. And it’s likely to keep on spilling over to the public market this year.”

The S&P 500 is pulling back slightly from yesterday’s record close, down 13 points to 3,926. But the Dow is reaching further into record territory, up half a percent at 32,650.

No joy in nondollar assets today: Gold sold off hard earlier this morning, threatening to break below $1,700 again… but at last check the bid is back to $1,712. Silver’s taking a bigger hit, down to $25.66.

Crude and copper are consolidating yesterday’s gains — a barrel of West Texas Intermediate a penny below $66 and a pound of the red metal at $4.11. 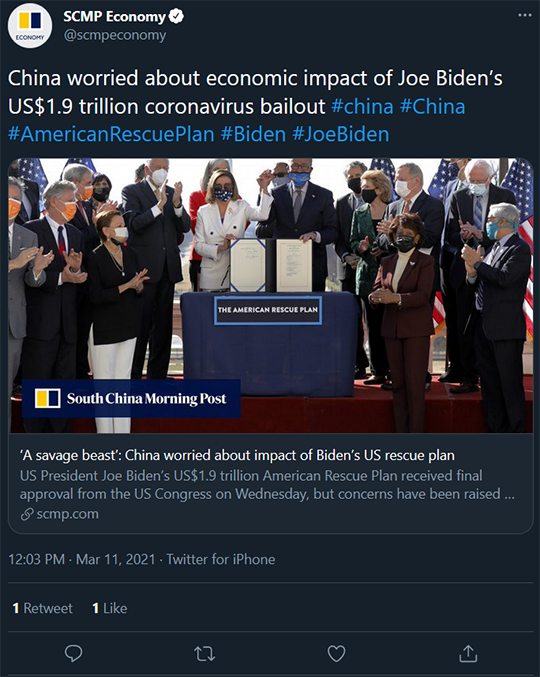 From Hong Kong’s leading newspaper: “U.S. President Joe Biden’s US$1.9 trillion coronavirus rescue plan has raised the alert level in China, with government officials and advisers openly expressing fear that the massive injection of money into the global market could inflate asset bubbles, cause further financial market turmoil and lead to higher inflation…

“Huang Qifan, former Chongqing mayor and an outspoken government adviser, described the plan as a ‘fierce flood and savage beast… It will inevitably result in massive liquidity and inflation.’”

The South China Morning Post interviewed several bankers and economists on the mainland. They all seemed concerned for one reason or another.

“Chinese internet users also weighed in on the U.S. plan, complaining that the whole world is paying the price for U.S. money printing, citing in particular the near 8% fall in the benchmark Shanghai Composite stock index in the past three weeks, which has wiped out several trillion yuan of market value.”

No, we’re not altogether sure what to make of it. But we feel it’s a public service to pass along the view from elsewhere, seeing as U.S. media have cast aside any critical eye whatsoever. (New York Times: “Biden, Champion of Middle Class, Comes to Aid the Poor.” Gettin’ deep in here!)

From the “gaming your corporate expense report file,” we see a restaurant in Toronto has cleverly named many of its menu items after… office supplies. 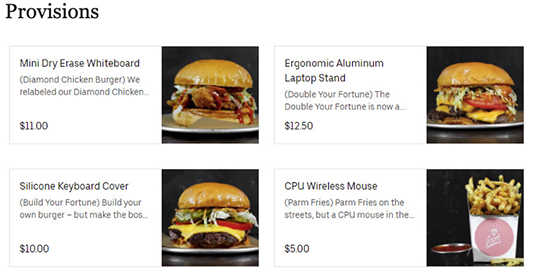 Don’t get the wrong idea, says restaurateur Jon Purdy. “It’s all just fun and games,” he tells the BlogTO site.

Probably. Surely the accounting folk would raise an eyebrow if the vendor column said “Good Fortune Burger,” no?

“The recent migration map based upon USPS change-of-address numbers is interesting,” a reader writes.

“I would be very interested in seeing prior years or an average over several years. My first thought is the annual seasonal pattern of snowbirds returning to the ‘less’ affluent Michigan after winter in Florida. Either returning home to be with family/friends with/anticipating COVID illness or prior to the massive influx of spring breakers and summer visitors.

“The interior migration from the high-cost, high-density coastal regions (NY/CA) is understandable and expected.”

“As someone who is skeptical of statistics used as propaganda, I watch for obvious distortions,” writes another, more pointedly.

“The source of your data (USPS change of addresses) and the time frame (February–July) will pick up ALL the snowbirds leaving Florida, Arizona and Texas after the winter season and heading back home to their northern residences — which would also account for unexpected gains by Michigan and Minnesota.

“To get an accurate picture, the data should have a year’s worth of data to include their fall return for a net zero on this activity (many may not return this year due to COVID, which is a legitimate inclusion).”

Anecdotally, your Michigan-based editor saw it go both ways last year among a few over-70 snowbird acquaintances playing it cautious with the virus. One fellow was already in Florida a year ago… and never made it back here during 2020. Another couple drove their RV from Arizona in the spring… and decided to stick it out through the winter here. Luckily for them, we’ve had the lowest snow total in at least a decade, heh…

P.S. Congratulations to Alan Knuckman’s Weekly Wealth Alert subscribers: Volatility be damned, they just bagged a 50% gain playing call options on American Airlines. Not bad for only three weeks… and they’re holding out for even-bigger gains on a second leg of the trade.

Alan’s on a whale of a winning streak… and his next recommendation is due first thing Monday morning. Access here.