On Thursday, Biden signed the $1.9 trillion American Rescue Plan… and the IRS started direct depositing checks over the weekend.

Of course, the Twitterati are momentarily diverted… 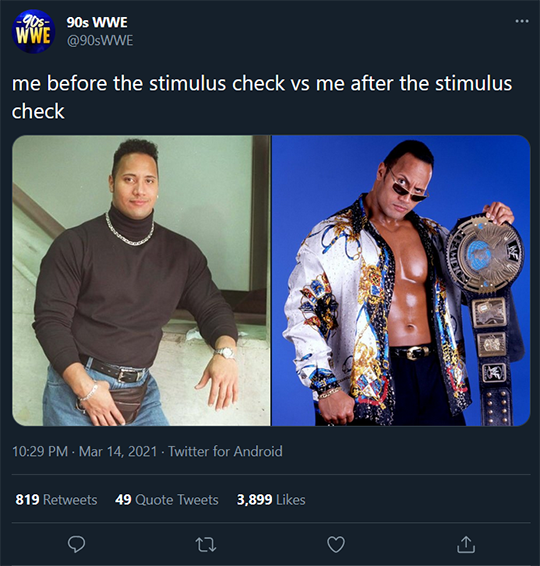 A Deutsche Bank survey of brokerage account-app users shows retail investors plan to spend 37% of their stimmy checks on the stock market. And that’s just an average…

The amount of stimmy checks — er, relief checks — allocated for stocks increases sharply according to the age, income and experience (inexperience?) of retail investors. 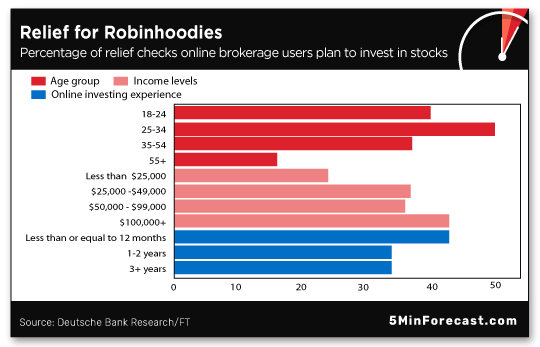 Deutsche Bank researcher Jim Reid says: “It’s worth highlighting that a large amount of the upcoming U.S. stimulus checks will probably find [its] way into equities.” By his estimate? About $30 billion.

Mr. Reid adds: “Behind the recent surge in retail investing is a younger, often new-to-investing and aggressive cohort not afraid to employ leverage.”

“So using a Reddit message board, they plotted ‘short squeezes’ — essentially forcing fund managers to buy shares of stock they were betting against.

“But a few things about this story have never added up,” Addison continues. “For one thing, even amateurs should know that it doesn’t make sense to buy stocks of companies that are on their way to extinction.

“And even though fund managers would be crazy to bet against GameStop at this point,” Addison concludes, “GME shares continue to yo-yo — shooting from $20 to well over $300 in a matter of weeks, only to fall below $100 before heading up again.”

“Silicon Valley despises Wall Street,” James emphasizes. “Think Elon Musk and Chamath Palihapitiya against the likes of Goldman Sachs and J.P. Morgan.” Which explains why Silicon Valley “invented companies like PayPal, Square and Stripe” — to avoid “using the banking system.” (To say nothing of Bitcoin!)

Framed this way, the WallStreetBets insurrection of early 2021 was just one skirmish in all-out warfare. To wit: “An internet company used its audience to legally take some of the wind out of Wall Street’s sails,” James says.

But we’re not talking David and Goliath here — more like Goliath versus Goliath. Or as Jim Rickards calls them “New Oligarchs” versus Wall Street’s old guard.

So why the grudge?

When it comes to funding Silicon Valley’s ambitions, “Wall Street takes these [tech] companies public… and screws them every time,” James says.

“Wall Street [banks] make the most of their money” in the IPO business, James explains. “But Silicon Valley has found a way to keep a larger portion of that cash themselves, exploiting a shortcut to the stock market.”

Which explains the proliferation of SPACs this year and last — aka IPOs for IPOs. A SPAC’s shares already trade on a major exchange, so a merger can help a startup go public faster — and much cheaper — than going through the traditional IPO process.

“All the best Silicon Valley companies are now going public via SPACs that are controlled by other Silicon Valley people,” James reports. Personally, he doesn’t see this ending well: “Wall Street tried the whole SPAC thing 10–15 years ago, and it didn’t really work out.”

At last count, there are over 370 SPACs looking for buyout targets, according to CNBC. It creates a lot of pressure in the system: “First raising the cash and then finding the company,” James says, “as opposed to the other way around?

“For now it is working because it’s got the backing of people who essentially have an infinite amount of money,” James says. But he’s concerned: As in the case of the Reddit crowd, retail investors will be used as the “New Oligarchs’” foot soldiers in their war on Wall Street. And sometimes caught in the crossfire…

[Editorial note: James Altucher is hosting a LIVE event to show Main Street investors how to make $500 in instant income using the strategy outlined on this page.

It’s called “The 5-Days To $500 Challenge”… And James coaches everyday investors through each and every step.

But time is running out to sign up for this unique offer: Don’t miss interactive coaching with this iconoclastic investor!]

Now to the market that never sleeps, flagship crypto Bitcoin is down about 7% to $55,960 at the time of writing.

“Tech stocks have been gut-punched since the middle of February,” says quantitative analyst Jonas Elmerraji. “All told, the big, tech-heavy Nasdaq Composite Index was down more than 10.5% heading into the start of last week.

“Here’s the good news — the data point to more upside ahead for the tech sector.

“Double-digit declines in the Nasdaq are actually pretty rare,” says Jonas. “Since the Nasdaq Composite Index launched back in 1971, we’ve seen 26 instances where the index sold off 10% or more. And historically, those dips have been spectacular buying opportunities.

“On average, the Nasdaq Composite winds up 17.9% higher 180 trading sessions after crossing the 10% drawdown point. 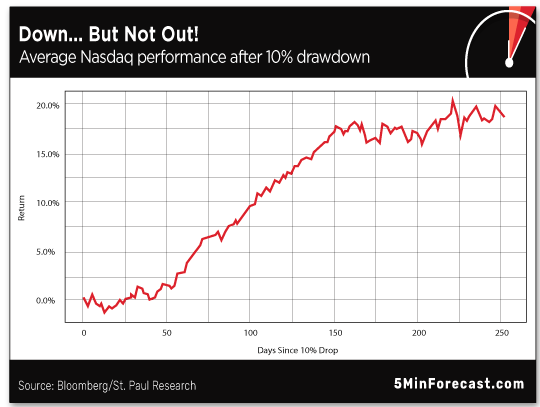 “There are a couple of important takeaways from the performance chart above,” Jonas notes.

“First, it takes a little while for stocks to find their footing following a 10% drop in the Nasdaq.

“Typically, the index has retested those lows before kicking off its big rally. That means we could see a few more weeks of churn before Mr. Market starts to show a stronger buy signal.

“Second, from about the 50-day mark, the uptrend has tended to be pretty incredible,” says Jonas. “That bodes well for a mid-second-quarter rally in the tech sector.”

His takeaway? “On balance, even accounting for the worst years, the strategy of buying the Nasdaq during 10% drawdowns and holding for the next year has been a major net winner.”

“Regarding snowbirds and USPS change of address,” a reader opens…

“I cannot believe any serious migration study would pull in moves flagged as temporary.

“The USPS address change process differentiates between permanent and temporary moves. Snowbirding, by definition, would be six months or less and temporary.”

The 5: From what we could find, the stats on the migration map we featured represent all USPS change of address requests — not just permanent requests. We note, however, that temporary change of address filings were up 27% in 2020 versus 2019.

“It is absolutely amazing that you are comparing Florida and California COVID-19 deaths and infections,” a reader comments on Thursday’s episode of The 5.

“Gov. DeSantis fired the person reporting to the media deaths and infections on a daily basis because she refused to play with the numbers to make him look good. She tried to continue to do so and was arrested at gunpoint.

“You also seem to blame the WHO for some of their policy changes over time. It’s my understanding they studied the spread of infection and changed their recommendation based on scientific facts that came in. Initially, masks were not recommended because they thought [the virus] spread via hand-to-hand contact. That changed when a study found it spread through the air.

“So how many deaths from COVID-19 do we have? 500,000. ‘Man, wearing a mask to prevent me from spreading or contracting a virus is a real burden… It’s too hard… It impinges on my freedom.’

The 5: We take exception to the reader characterizing us as anti-maskers. On the contrary, The 5 called out Dr. Fauci, former U.S. Surgeon General Dr. Jerome Adams and NYC Mayor de Blasio (among others) for their inconsistent guidance on mask-wearing.

[Sidebar: The whole debate about the efficacy of mask-wearing seems to be a moot point, decided by the medical establishment when germ theory was accepted in the 1890s. As I asked an anti-mask family member: “Would you want your surgeon to wear a mask in the operating room?”

That was a rhetorical question… Meaning, while we don’t know exactly how effective wearing a mask is at slowing the spread of COVID-19, at least we know why it mitigates some spread. Something Fauci and company should have confirmed from the get-go.]

That said, even mainstream media outlets are acknowledging Florida and California have had very similar outcomes…

The Associated Press reports: “States with greater government-imposed restrictions have not always fared better than those without them.

“California and Florida both have a COVID-19 case rate of around 8,900 per 100,000 residents since the pandemic began, according to the federal Centers for Disease Control and Prevention,” the AP says. “And both rank in the middle among states for COVID-19 death rates — Florida was 27th as of Friday; California was 28th.”

And Connecticut and South Dakota — two states with some of the most stringent and relaxed restrictions respectively — are ranked among the 10 worst states when it comes to COVID-19 deaths.

“This is going to be an important question that we have to ask ourselves,” says Amesh Adjala of Johns Hopkins Center for Health Security. “What public health measures actually were the most impactful, and which ones had negligible effect or backfired?”

Huh… you mean the “experts” don’t have all the answers? A dose of humility — and common sense — might do the body politic good…

P.S. Are you tired of watching everyone ELSE make money in the stock market this year?

There’s one catch, however, since this is a LIVE event… Time to sign up is running out. Reserve your spot before space fills up.