“Shortly after the launch of Amazon in 1996, I attended a dinner party,” says futurist George Gilder. “At that party, on Lake Washington near Seattle, Jeff Bezos personally signed me up for Amazon.”

Keep in mind, this was way back when Amazon was a fledgling online bookseller, and Jeff Bezos resembled an unassuming librarian… 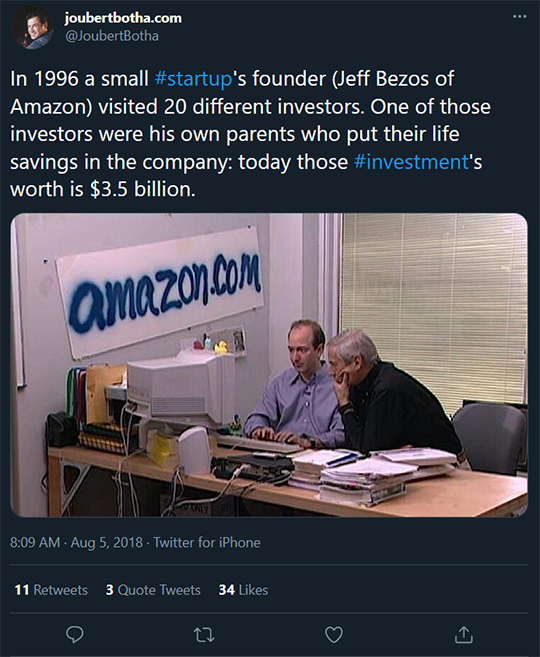 Even in the mid-’90s, George says: “I touted the company [according] to my model of money as time. I celebrated Amazon… for its ability to save the customer time.”

Of course, books were just the beginning… but they provided valuable insight…

“Bezos saw without retail shelf space to pay for, he could provide near-infinite choice with online retail,” George says.

That’s because traditional retailers must limit expensive shelf space to those “products that turn over quickly enough to pay the rent,” making unique products hard to come by — and certainly hard for brick-and-mortars to justify stocking.

Books demonstrate this point: “There are millions of titles that sell… maybe 50–1,000 copies a year,” George says, “most of which would not merit an inch of shelf space in prime retail real estate.”

Like slow-selling books, low-demand products are “an expression of what is called the ‘long tail’ — the concept that a business can be profitable by selling low volumes of many hard-to-find items,” says George.

The long tail principle isn’t original to George Gilder or Jeff Bezos; instead, Chris Anderson — former editor of Wired magazine — popularized the concept in 2004 with his eerily prescient article “The Long Tail.” It’s a fascinating read, particularly from our vantage point in 2021.

Here’s just a snippet: “Forget squeezing millions from a few megahits at the top of the charts. The future of entertainment is in the millions of niche markets at the shallow end of the bitstream.”

This when Blockbuster was still a thing… and Netflix was mailing subscribers DVDs.

So as Amazon embraced long-tail products, Bezos launched Amazon Marketplace in 2000 (in the middle of the dot-com bubble).

Here’s how it works: “Merchants pay Amazon a percentage of the sale,” George says. And “whether they pick, pack and ship [products] themselves or use ‘Fulfillment by Amazon,’ merchants cover shipping and handling costs.”

Plus, “They decide… how much of those costs to pass along to the customer,” George notes.

“The beauty of Marketplace is that the merchants, not Amazon, bear the risk of those decisions.

“It took some years for [Bezos] to grasp that with Marketplace, he had relaunched the company,” says George. 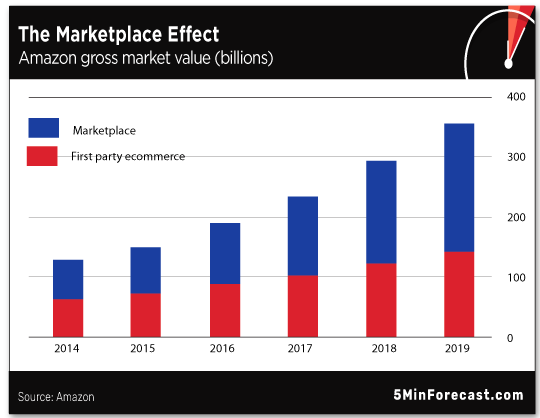 “The results are remarkable,” George says. “Measured by gross market value, 60% of Amazon’s 2019 retail sales went through Marketplace,” he says. “For 2020 it will be higher yet.

“Marketplace sellers, meanwhile, account for most of Amazon’s ad revenue,” says George. “As sellers pay a fee for displaying their wares more prominently on the site.

“The surging growth of Marketplace is another Amazon victory,” George says.

“Not every product on Marketplace is a hard-to-find, long-tail item,” George says. “But most of the roughly 2.5 million Marketplace sellers live out on the long tail… merchants who could never otherwise reach a national or even global market.

“Do we like Amazon as a business today?” George asks. “It would be more accurate to say that we like the arc Amazon’s story is following.

“Amazon will have…. continued revenue growth, improved margins and its legendary free cash flow,” George concludes. “And it will be more of a money machine five years from now than it has ever been before.” Investors should act accordingly…

“Did we just see some ‘stimmy money’ sneak into the markets?” asks analyst Greg Guenthner.

“Stocks snapped back to life late Monday afternoon as a flurry of buyers stormed into the market right before the closing bell,” he says. “The Nasdaq shot to a gain of more than 1% following what was until that point a relatively mundane session,” he continues.

“Why is this important? This move could signal that the Nasdaq is finally finished with the February–early March tech correction that has punished some of the market’s most popular trades.

“I think we could see some interesting action as a result of a continued tech resurgence,” Greg concludes.

Something quant Jonas Elmerraji mentioned yesterday at The 5…

Taking the temperature of the market today, the Nasdaq’s the only index in the green — up 38 points to 13,450.

And we have a raft of economic numbers to report…

After making it rain in January, consumers were exceptionally parsimonious in February. According to the Commerce Department, retail sales dropped 3% during the shortest — and perhaps most miserable? — month of the year.

Mainstream financial outlets blame snow and ice in large swaths of the country for the retail malaise… But that doesn’t explain online sales, down 5.4% last month.

"Let's not mince words. This was bad," say Wells Fargo economists in a research note. Alrighty…

But NPR notes: “With another round of relief payments — worth $1,400 — now making their way to consumers' bank accounts, forecasters anticipate more free spending this spring.”

Heh… stimulus much? And just in time too as many states chillax when it comes to COVID-19 restrictions.

The Federal Reserve reports industrial production fell 2.2% last month after four-straight months of expansion. Well below expectations of a 0.5% gain…

And the latest reading from the National Association of Home Builders (NAHB) Housing Market Index comes in at 82 this month, down two points from February.

For some perspective, a reading over 50 means builders are optimistic when it comes to single-family home sales.

Hmm… no mention of the weather?

“For the Biden administration,” Bloomberg continues, “the planned changes are an opportunity not just to fund key initiatives like infrastructure, climate and expanded help for poorer Americans, but also to address what Democrats argue are inequities in the tax system itself.”

So while Biden rejects an outright wealth tax — like the one Sen. Elizabeth Warren favors — “the administration’s current thinking does target the wealthy,” Bloomberg says.

Or as White House economist Heather Boushey puts it: “[For] folks at the top who’ve been able to benefit from this economy and haven’t been this hard hit, there’s a lot of room there to think about what kinds of revenue we can raise.”

But if you’re looking for someone to blame for raising taxes — according to Bloomberg — look no further than Treasury Secretary Janet Yellen.

Because if you thought the $1.9 trillion American Rescue Plan was a behemoth… wait until you see what Joe’s got up his sleeve! “The next initiative, which is expected to be even bigger, won’t rely just on government debt as a funding source,” says Bloomberg.

“Treasury Secretary Janet Yellen has said at least part of the next bill will have to be paid for, and pointed to higher rates.”

In an interview at ABC’s This Week, she said: “Policymaking is about identifying and addressing risks, and the most significant risk we face is a workforce that's scarred by a long period of unemployment.

"Is there a risk of inflation? I think there's a small risk. And I think it's manageable," she said.

Meh… So the Fed money supply inflated $4 trillion in 2020… with an additional cash explosion via “stimmy” checks in 2021. NBD…

Americans aren’t the only ones escaping big cities: French citizens are carving out a slice of bucolic countryside… and getting more than they bargained for.

“[Now] that will be codified in its environmental legislation.” This after several run-ins between villagers and city slickers.

In one headline-grabbing case, Corinne Fesseau’s rooster Maurice was on the chopping block — literally — after a new neighbor sued Mme. Fesseau because of Maurice’s early-morning crowing.

“Thousands of people signed a ‘Save Maurice’ petition, and a judge eventually upheld the cock-a-doodle-doos,” AFP says.

“Living in the countryside implies accepting some nuisances," says Joel Giraud, a government official in charge of rural life… with just the right amount of ennui, we think.

In five sessions, James will explain a powerful, lucrative — but simple — income secret… A secret strategy he believes he can teach ANYONE to do.

That’s why James is issuing this LIVE challenge — open to anyone who wants to learn. And you can participate right from the comfort of your home. But space is limited…

Because this is a LIVE event, there’s no time to waste. View all the details about the challenge and see if you qualify today.