“Inflation is the No. 1 risk for the market, according to a monthly survey of global asset managers commissioned by Bank of America, displacing COVID-19 for the first time since February 2020.”

All told, 37% of survey respondents cited inflation. Another 35% cited the potential of tighter Federal Reserve policy sparking another 2013-style “taper tantrum.” The virus? Only 15%, down from 30% last month.

“A net 93% of investors in the survey expect inflation to rise in the next 12 months, up 7 percentage points from last month and the highest reading in the history of the survey, which dates back to at least 1995.”

As we’ve mentioned before, it’s this “inflation expectations” thing that’s driving long-term interest rates higher. The benchmark yield on a 10-year Treasury note has leaped from 0.91% at the start of the year to 1.67% this morning. New government spending on the scale of a $1.9 trillion “stimulus” bill has a way of doing that.

Thing is, we’ve seen this movie before and we know how it ends. 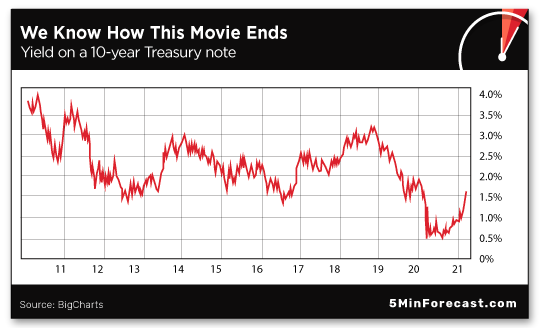 “They went up on the same scenario markets are seeing today — because of inflationary expectations. But the inflation never came. Experts say, ‘Oh, just give it a little more time. Inflation’s right around the corner.’

“But it hasn’t materialized. The higher rates actually slowed the economy instead.

To be clear, inflation is picking up at the moment. But it was picking up in the spring of 2010 and the fall of 2018 as well.

The question, then and now, is whether the jump will have any staying power. To listen to Establishment financial media, we’re on the cusp of 1970s near-runaway inflation again and the consequences will be dire — the return of gas lines, a cardigan-clad president urging us to lower the thermostat, maybe even disco and leisure suits.

Our bet here is that the more likely analogue is Jim’s example of the jump in rates during 2009–2010 as the economy was clambering out of the “Great Recession.” The economy is likewise clambering out of recession now, albeit a strange recession mandated by government. Ditto for the part about big stimulus spending.

It’s natural for inflation to pick up in that environment — “reflation” is the phrase you sometimes hear. The trouble comes when reflation turns into actual inflation.

Inflation is driven by money supply, yes, but it’s also driven by consumer psychology. If consumers are too scared to spend, then there’s no “velocity” and inflation can’t accelerate.

That’s why inflation didn’t take off meaningfully last year despite all the money printing and supply-chain disruptions — people were frightened, and the savings rate skyrocketed to record levels.

Jim says if velocity is going to make itself felt at all, it won’t be until 2022. Until then, interest rates will rise for another six months or so, then once again start their descent.

Of course, there are sure to be some thrills ’n’ chills along the way — maybe even this afternoon when the Fed issues its latest policy proclamation.

The Fed will have done its thing by the time you read this; we’ll follow up tomorrow. It’s a given the Fed will leave the fed funds rate at near-zero and keep buying bonds at a $120-billion-a-month pace. The drama will lie in “the dots” — the Fed’s quarterly outlook for the economy.

From there, traders will attempt to divine clues about future Fed policy; if they sense not enough commitment to “fighting inflation,” they might sell off bonds and propel longer-term interest rates even higher. The selling might well spill over into the stock market — as we saw to some extent late last month and early this.

In the meantime, it’s the Dow taking the lead as traders await the Fed’s announcement.

Precious metals are treading water, gold at $1,729 and silver at $25.95. Crude has pulled back a buck to $63.82 after the Energy Department issued its weekly inventory numbers; copper is up a nickel to $4.10 a pound.

Just one economic report of note: For the first time in what seems like forever, housing starts and permits clocked in below expectations this morning. The volume of new construction tumbled 10.3% from January to February, and permits — a more reliable indicator of future activity — fell 10.8%.

The mainstream is surprised, but for the life of us we can’t figure out why — in tandem with the 10-year Treasury, the rate on a typical 30-year fixed mortgage has risen from a record-low 2.65% in January to 3.05% now. Alas, given the tightness of supply, higher rates probably won’t have the effect of pushing home prices down.

“They say we live in a service economy nowadays. The problem is the overall quality of service is lousy,” quipped your editor’s brother some years ago.

If this was true in the pre-COVID era, it is doubly or triply true now.

For the first time since November 2019, I’ve ventured this week from my Upper Midwest home to company headquarters in Baltimore for a video shoot that’s just not feasible in a “Zoom call” format.

The hotel restaurant where I typically dine is now closed on Mondays. So I signed up for a DoorDash account — such urban conveniences are still largely unknown where my wife and I settled down — and ordered from Chipotle. (Easy low-carb option — a burrito bowl with cauliflower rice and no beans.)

I opened the bag, only to discover… no plasticware. So I ventured down to the hotel lobby — where no one was around and there was no bell to ring. I settled for eating my meal with my fingers, using a washcloth for a napkin. (Note to self: Order a titanium spork for my everyday carry.)

Meanwhile, a card left on the bed before my arrival informs me that housekeeping will be performed only at five-day intervals “for your safety.”

Really? My safety? No, it’s got nothing to do with keeping payroll to a bare minimum to cope with an uncertain revenue stream, does it? (There’s a personal injury lawyer who’s advertised on Baltimore TV for decades. His signature line, directed at the insurance companies, is “Don’t urinate awn my layg and tell me it’s raining.”)

Yeah, I know. First-world problems. And the virus still rages even as all the numbers are moving in the right direction. Point being simply that COVID is giving “service” businesses an excuse to slack on their level of service with no expectation of consequences.

On the subject of customer service, a Baltimore-area reader writes: “I can’t resist engaging in the discussion about measuring migration patterns using USPS change of address forms — with a pivot.

“In my ZIP code you don’t need a change of address form to have your mail redirected. In the last year alone I have received no fewer than a dozen pieces of mail (all first-class) that were not addressed to my house. Many were not even addressed to other houses on my block or on my street. In two instances first-class mail that was picked up for outgoing delivery at neighbors’ houses was dropped in my mailbox. One, based on the address on the envelope, was a neighbor’s payment of a bill.

“I have heard the mantra about how, given the pandemic, the postal workers are overburdened. Unfortunately, that rings hollow with me. This was occurring prior to the pandemic. Regardless of the circumstances anyone faces, we should always strive to do our best at work, especially when that work is in the public service.

“The USPS is not alone in this situation. The Baltimore Sun persists in delivering trash (otherwise known as ‘free papers’) in my front yard after we have several times asked them to stop. It stops for a while and then begins anew when a new delivery person is hired. Who knows, if I had received the paper I had subscribed to with the regularity I receive this trash, I might not have cancelled my subscription.

“Both of these organizations (USPS and The Baltimore Sun) seem oblivious to the trends away from their services in this digital age. Talk about a frog in a pot of water.

“I’m not advocating a return to the way things were. That is both foolhardy and impossible. I would just appreciate a transition to the newer way of doing things with a little less bumpiness in the road traveled.”

The 5: The Postal Service’s attempts at “efficiency” seem mighty strange, indeed. In my small Midwestern town, every piece of local mail is routed through a central facility 100 miles away now.

Meanwhile, The Washington Post reported last month that USPS “has discussed plans to eliminate a tier of first-class mail — letters, bills and other envelope-sized correspondence sent to a local address — designated for delivery in two days. Instead, all first-class mail would be lumped into the same three–five-day window, the current benchmark for nonlocal mail.”

Well, that’s one way to get around the fact this class of mail had only a 38% on-time delivery rate at the end of last year…

“I am one of Amazon’s third-party sellers and have been since 2015,” a reader writes after we noted yesterday that well over half of Amazon’s retail sales now go through Amazon Marketplace.

“I am also one of those long-tail sellers. My niche is collectible games. My top sellers include games such as 1989 Electronic Battleship, the 1971 Careers game plus many, many others. But recently Amazon has started requiring testing for all of these old, collectible games in order that they conform to the ASTM F963-17 government safety standards.

“But these standards only apply to toy manufacturers. Not to sellers. And certainly not to games manufactured 30–40 years ago. But not according to Amazon.

“I have had half of my collectible board game listings deleted. I was using Fulfillment by Amazon and now have 134 items stranded. Amazon’s goal seems to be to wipe out their collectible game catalog. And a lot of new(er) games as well. This has affected thousands of third-party sellers.

“Who knows what product category Amazon will target next?

“I would not be so optimistic about Amazon’s future prospects.”

The 5: That’s insane. Not surprising, but insane nonetheless. Gotta wonder what lawyers were involved in those discussions. “Don’t you realize this toy was pulled off the market decades ago because of a choking hazard?! Leaving it on Marketplace poses a material risk to Beelzebezos’ fortune!”

Is eBay a viable option for you? Or are we headed toward a dystopian future in which collectible games that don’t meet current CPSC requirements become black-market goods? Oy…

Our James Altucher is ready to walk you through it — and he’s offering something special to make it worth your while. Check out his “5-Days to $500 Challenge” right here.