[Note from Dave: Just a quick word before I turn over today’s edition to Emily. As I mentioned yesterday, I’m at company headquarters in Baltimore this week to put the final touches on a special project that just can’t be coordinated over Zoom.

Long story short, if you’ve got the heebie-jeebies about a potential market crash — maybe you’re concerned about something in the news, or maybe it’s just a hunch you’ve got — we’re about to clue you in to a strategy offering ultimate downside protection without putting up a ton of capital.

Details to follow in the days to come. Just wanted to give you a heads-up. Emily, take it away…]

“In June of 2016, marijuana stocks were barely on the radar for most investors,” recalls pot stock authority Ray Blanco.

“There were a handful of states that had legalized recreational marijuana, but when it came to the entire industry, there was a lot of apprehension.” The main concern? “The federal government would seize the assets of neophyte cannabis companies,” Ray says.

And the fear was legitimate: While Trump played coy on the subject, U.S. Attorney General Jeff Sessions was a dyed-in-the-wool pot opponent who once said marijuana was only “slightly less awful” than heroin. (Sessions would later prove his cannabis animus when he repealed an Obama-era policy of federal detente on legal-weed states.)

You could call 2017 “the year of cannabis for the stock market,” Ray says. Those were heady days when investors couldn’t get enough, and the appetite was such that penny pot stocks experienced extraordinary growth. 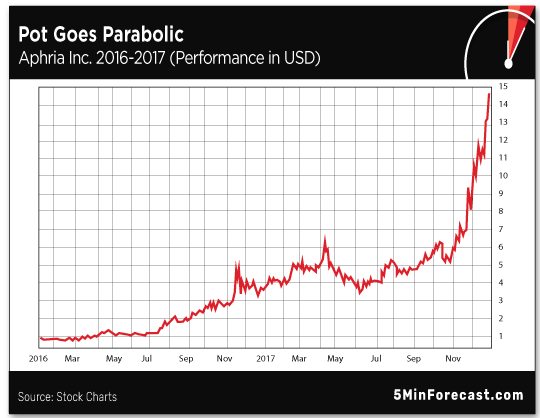 Federal legalization was — and is — still the holy grail of the cannabis industry, but “investors bought up these names in anticipation of these companies making bank later on,” says Ray.

“I’m saying this now,” he continues, “because I believe I’ve uncovered the next stock trend that will hit the markets…

“I’m talking about psychedelics,” Ray says, “specifically those related to the psilocybin in ‘magic mushrooms.’ And you’ll find the psychedelic story echoes that of cannabis in 2016.”

With real-world applications for depression, PTSD, anxiety, cancer-treatment side effects and opioid addiction (and many others we don’t have time to list) cannabis is an obvious connection.

It’s a reasonable conclusion then: Psilocybin-producing mushrooms might be the next cannabis… with revenue potential similar to the marijuana industry’s.

“This can only mean good things for investors,” Ray says. “There’s HUGE potential for this to take off… As more research is conducted and as more states begin to legalize psilocybin, psychedelic stocks can only benefit.

“The question now? How do you invest in ‘shroom’ stocks?” says Ray. “There are several small-cap companies out there that have a lot of potential.

According to the ETF’s website, PSYK is “designed to provide exposure to the performance of a basket of North American publicly listed life sciences companies having significant business activities in, or significant exposure to, the psychedelics industry.”

At this time, PSYK trades only on Canada’s NEO exchange. If you’re not comfortable with that, “you can still look at PSYK’s holdings and mimic what they have there.” The ETF, in fact, comprises 17 stocks so far, including mainstream pharmaceutical companies Johnson & Johnson (JNJ), AbbVie (ABBV) as well as Peter Thiel-backed Compass Pathways (CMPS).

The EV sector has stunning promise for investors as one automaker after another commits to going fully electric in the next decade.

And without a doubt, EVs need batteries… One $2-stock Ray’s targeted — based on its innovative technology — has potential to land a major partnership with an EV giant.

“The elephant in the room,” he says, “the SLR issue — or supplemental leverage ratio regulation on banks — is that trillions of dollars’ worth of future Treasury bonds, priced at real yields of zero or negative, will need to find a home.

“Who’s going to hold this hot potato?” Dan asks. Dave will have more on SLRs Monday…

We’re seeing that choppy action in tech stocks analyst Greg Guenthner warned us about early this week. As for the final major U.S. index we track — the S&P 500 — it’s down 17 points to 3,955.

The Labor Department reports first-time unemployment claims jumped to 770,000 for the week ending March 13, contrary to economists’ expectation of 700,000… 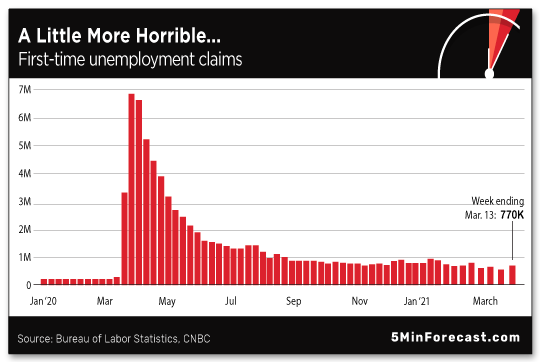 Needless to say, that number is still stubbornly above the worst of the Great Recession.

As if unemployment claims couldn’t be further removed from the rest of the economy, the “Philly Fed” survey of mid-Atlantic manufacturing showed that growth is still strong, with a reading of 51.8.

Or the highest reading since April 1973, when “Tie a Yellow Ribbon Round the Ole Oak Tree” topped the charts…

“Where have all the small caps gone?” asks quantitative analyst Jonas Elmerraji.

“They’ve been disappearing at an alarming rate,” he says. “Today, there are about 25% fewer small-cap stocks on the market than there were about a decade ago.

“Part of the reason is that there are fewer stocks in general. There are about half as many U.S. stock listings today versus the peak in 1996.

“And a research piece published by Morgan Stanley last year points out that 90% of the stocks that have disappeared are small- and microcap companies,” Jonas says.

“Since companies have unprecedented access to capital from private-equity and venture-capital investors,” says Jonas, “it pays to stay private…

“Morgan Stanley notes the environment over the last decade or two has made it so it’s a better payoff for a small company to be acquired by a bigger company than to go public via an IPO.”

But the biggest loser, of course, is the retail investor. “When small companies stay private longer and then skip going public, individual investors miss out on participating in the upside,” says Jonas. “Instead, all of the gains go to venture-capital funds and other private-equity investors.”

Jonas says: “There’s light at the end of the tunnel…

SPACs, too, might be reversing the shrinking number of public companies, enticing individual investors to pay more attention to companies with market caps below $1 billion.

In fact, Jonas notes: “Few investors realize that last year, there were more than 400 companies that went public!” he says. “Retail investors should be cheering! There’s no question having a bigger pool of investments to choose from is a good thing.

“And 2021 already looks like it’ll be a worthy follow-up, with many high-profile and some lesser-known companies already filing SEC paperwork to become publicly traded.

“The return of the small-cap stock opens up huge opportunities for investors,” Jonas says. “Stay tuned…”

The bankrupt subscription movie-theater experiment MoviePass is teasing a comeback on its website Moviepass.ventures. But this is curious: Their former domain — Moviepass.com — displays the same shutdown notice it posted two years ago.

“The company — famous for once offering unlimited movie tickets for the too-good-to-be-true price of $10 a month — shut down in September 2019 after it could no longer afford the deals it was offering subscribers,” says The New York Post.

“Moviepass.ventures was only registered as a web domain this month after Mark Wahlberg’s production company, Unrealistic Ideas, announced an upcoming docuseries on MoviePass.”

What a farce it was… And now we have Marky Mark himself trying to resurrect it? At least in documentary form with his appropriately named company: Unrealistic Ideas, indeed.

We’re guessing a documentary might be given the Fyre Festival treatment… or even the Theranos treatment?

Speaking of, we understand Steve Jobs-wannabe Elizabeth Holmes got a trial extension for the end of August. She’s expecting a baby in July… around the time of her original trial date. Mazel tov…

A technology that is already protected by patent application No. 3069168.

According to Ray, if Elon Musk announces a partnership with this tiny company… there is no telling how high this under-the-radar stock might go.

Which is why he went live in an urgent summit to give you the breakdown of the situation he sees unfolding.