[Note from Dave: Moments ago, thousands of readers finished watching my exclusive debriefing with our floor-trading guru Alan Knuckman. They learned how they can protect their portfolio from a sudden market drop this spring — “disaster insurance,” he calls it.

If you’re worried about an imminent correction or even a crash — maybe there’s a headline you’ve seen, or just a gut feeling you’ve got — you owe it to yourself to watch the replay of our event right away.

Click this link for instant access… then you can come back here as Emily brings you today’s edition of The 5.]

Acclaimed “Big Short” investor Michael Burry isn’t simply at risk of Twitter’s banhammer. He got a visit from a goon squad…

You might know Burry as the heavy metal-loving investor — portrayed by Christian Bale — in the movie version of Michael Lewis’s bestseller The Big Short. 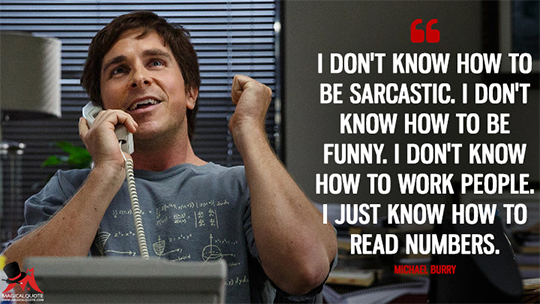 Now Dr. Burry manages Scion Asset Management and has been outspoken about what he sees as some of the market’s most speculative assets.

“[Burry] has used Twitter to warn of speculative bubbles in markets and predict a devastating crash,” says Business Insider.

“He’s… tweeted criticism of Tesla — which he’s short — as well as Bitcoin, Dogecoin, Robinhood, and the GameStop buying frenzy this year.” And don’t get him started on NFTs…

But this month he disappointed his roughly 400,000 Twitter followers when he peaced out, wiping his account clean.

In one of his final messages last week (since deleted), he said: “Tweeting and getting in the news lately apparently has caused the SEC to pay us a visit.”

Yikes. No word what the federal regulators had to say, but it was enough for Burry to change his profile pic to this… 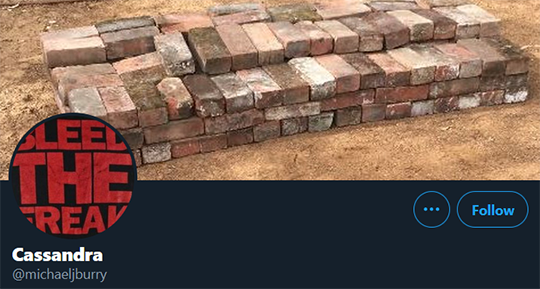 “Lovely,” Burry tweeted after his sit-down with the SEC alongside the hashtag #nomoretweets.

Business Insider notes: “Burry cleared his Twitter feed, leaving only a trio of tweets promoting two Vietnamese restaurants and a Mexican eatery in his home state of California. He added links to the Twitter profiles of eight bands.”

[Humor me while I play Nancy Drew for just a moment. The bricks? Burry might be telegraphing he’ll be silent as a brick wall from now on.

Or considering Burry’s penchant for rock ’n’ roll, maybe the image is a reference to the Pink Floyd classic “Another Brick in the Wall,” about institutional oppression, with lyrics including “We don’t need no thought control” and this: “I have seen the writing on the wall.”

Hmm… Of course the handle “Cassandra” refers to the prophetess of Greek mythology who was cursed to prophecy… but never to be believed.]

One of Burry’s parting shots — post-SEC visit and written in Vietnamese — translates to: “You know my position now, no need to hear more from me.”

“I’m not going to sugarcoat it,” says our market analyst Greg Guenthner, “these are difficult trading conditions!”

But Greg’s not pronouncing a sky fall… yet. “Rather, I believe we’re feeling the effects of the speculative unwind from the GME/SPAC/crypto-led trading mania we experienced earlier this quarter,” he says. (Huh… most everything Burry warned about.)

For the latest durable-goods report from the Commerce Department: The headline number shows a 1.1% drop in February, versus the 0.4% increase economists predicted.

To blame for February’s decrease? “Supply-chain challenges,” The Wall Street Journal says. Which is no surprise to our readers — we’ve chronicled everything from lumber to semiconductor shortages.

As a reminder, “durable goods” are anything designed to last at least three years — washing machines, drill presses, jet engines. Strip out military goods and aircraft of any sort — where sales swing wildly month to month — and you have a category called “core capital goods.” And that decreased to 0.8% for February.

The long-term trend? Economist Chad Moutray of the National Association of Manufacturers is keeping his chin up. He notes, according to WSJ, “Nearly 88% of manufacturers were positive about their company’s outlook in the latest NAM survey of manufacturers, a two-year high.”

Data firm IHS Markit says its flash U.S. manufacturing PMI increased to 59 in the first half of March — from a final reading of 58.6 in February — “when activity took a step back after a cold snap hit large parts of the country,” Reuters says. Readers will recall any reading over 50 signifies expansion…

Also expanding? The prices manufacturers are paying for raw materials, running up to a 10-year high in early March. All told, it’s the “most severe supply chain disruption on record,” says IHS Markit.

“The relentless rise in input costs is one of several factors expected to drive inflation above the Federal Reserve’s 2% inflation target this year,” Reuters says. You heard it here, folks… 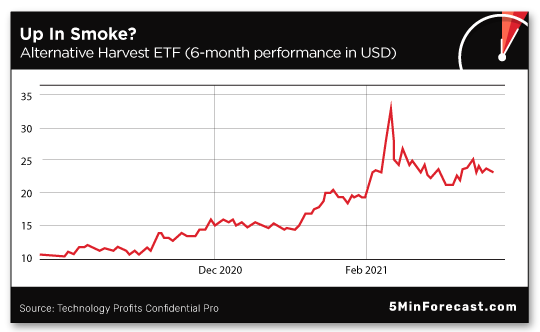 “You can see the huge spike in February, but the election-related uptrend in pot stocks that kicked off last November remains intact,” says Ray.

“Looking at 2020 in the rear-view, U.S. sales hit a record $17.5 billion for the year, a 46% increase over 2019,” he notes. “Sales even grew sharply in ‘mature market’ states that have had legal cannabis for years, like Colorado and Oregon.

“And there are still plenty of states that will eventually either open up medical markets or flip over to full adult use,” Ray says. Presumably following the lead of “New Jersey, where Gov. Phil Murphy just signed a bill to legalize adult-use cannabis and create a new regulated marketplace.

“At the federal level, it’s expected that the SAFE Act will be brought back before Congress on Thursday,” Ray says.

“This is a financial bill that would allow state-legal cannabis businesses to fully use the banking system.” As it stands, banks that deal with marijuana-based businesses risk running afoul of federal law. “Currently, these businesses resort to cash-only or indirect methods for transactions,” Ray notes.

(One unlikely proponent of the SAFE Act? Why, the friendly folks at the IRS! Imagine dealing with legal tender when cannabusinesses pay their taxes? “The IRS prefers electronic payments over labor-intensive cash,” says Ray.)

“Last year, the SAFE bill passed the House of Representatives but stalled in the Senate,” Ray continues. “But Democratic senators are making this a priority.

“With control of the upper chamber, the likelihood of the SAFE Act getting to the president’s desk in 2021 just went up exponentially,” Ray concludes. “Meaning pot stocks are still hot.”

Does the pandemic have you eating your feelings? Krispy Kreme wants to help. 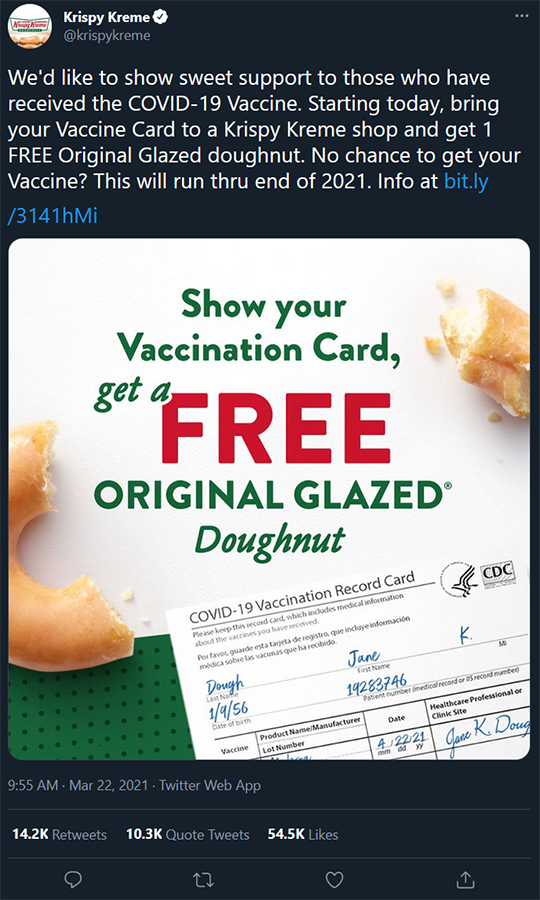 The promotion — which started Monday and extends through the end of 2021 — promises one free glazed doughnut per day when customers flash their vaccination cards, proving they’ve had one or two doses of an approved vaccine.

“We all want to get COVID-19 behind us as fast as possible and we want to support everyone doing their part to make the country safe by getting vaccinated as soon as the vaccine is available to them,” says Krispy Kreme chief marketing officer Dave Skena.

Ahem… aside from normalizing a “Papers, please” approach, Krispy Kreme’s promotion is sorta counterproductive on a couple levels…

First, one original glazed doughnut is 190 calories with 11 grams of fat. Saturated fat, you ask? About 25% of your daily allotment.

Second, mediaite and blue-checked tweeter Emily Miller notes: “78% of COVID patients who had to be hospitalized are overweight and/or obese. How about give out a free coffee instead of a doughnut, Krispy Kreme?” Now, there’s an idea…

Hate to be a killjoy here… if the ‘rona doesn’t get you, heart disease will.

Does he anticipate a second act in his storied career — soon?

In the preliminary research for our “disaster insurance” trade — designed to cushion you against an imminent market downturn — Burry’s “big short” play going into the Panic of 2008 was one of the examples that jumped out at us.

Obviously, those guys were already starting out with millions… so if you lay on a similar trade for yourself as a hedge against a sudden sharp pullback in the market, your results won’t measure up.

But wouldn’t you feel better knowing it’s cushioning the losses elsewhere in your portfolio? In an extreme case, you could come out substantially ahead of the game. And just by placing a single trade that could make you 40 times your money.

That’s what our floor-trading pro Alan Knuckman described to me in our exclusive briefing, concluded just a short time ago. Please, if you haven’t watched it yet, you owe it to yourself to give it a look right now.