And to think, one year ago the “reopening trade” wasn’t even a thing. Today? You can’t get away from the headlines plastered across financial media… 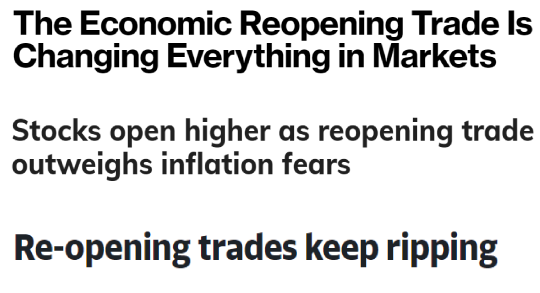 First, let’s back up: What exactly is the reopening trade?

Historically speaking, during the 11-year bull market — from 2009–2020 — U.S. large-cap growth stocks outperformed small-cap stocks. And that trend persisted for much of last year until “stay at home” stocks benefited from pandemic lockdowns.

More recently, however, “the sectors that benefited most from the pandemic-inspired shift to working from home have fallen hard,” The Wall Street Journal says. 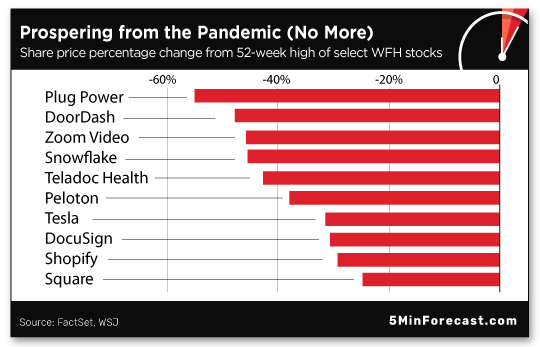 Since Nov. 9, 2020 — the day Pfizer’s COVID-19 vaccine was approved — the market’s appetite shifted from WFH to reopening stocks…

Namely, investors rotated to snap up bargain — particularly small-cap — stocks that should get a boost from a return to normalcy. (Or a near facsimile of normalcy.)

And here’s evidence of the reopening trade: From Nov. 9, 2020, through late February, U.S. small-cap stocks soundly outperformed large growth stocks — with a total return of 29.5% (small caps) versus 6.54% (large caps).

Or as The Wall Street Journal notes: “The onset of the reopening trade took the Russell, the main small-cap index, up 31% in the fourth quarter alone.”

But buyer beware: “The reopening trade is starting to look… volatile,” says WSJ.

“Lately, the firms that were supposed to benefit from the economy’s reopening have slumped, too. The Russell 2000 Index of smaller stocks has fallen 8.5% from its March 15 high.”

Here’s why: “Small businesses are more tied to the domestic economy than bigger companies, and many of the constituents of the Russell 2000 are cyclical companies that were battered last year.”

But the reopening trade isn’t dead in the water; rather, retail investors need to be very discerning.

“Not all stocks are good buys,” clarifies author and former Wall Street banker Dr. Nomi Prins. “You only want to buy the stocks that will benefit most [from the reopening].

“The biggest gains won’t be made from household-name stocks that everyone knows about. Stocks like Apple or Google or Amazon,” Nomi says.

“The biggest gains will be made in lesser-known small-cap stocks. These are the kind of stocks we’re recommending,” she says. “And we’re convinced these names could beat large-cap stocks by a factor of 10.”

[Editorial note: In just a few hours, Nomi Prins will be going LIVE with a big prediction for the rest of the year…

It has to do with the reopening of America over the coming weeks.

And she’ll identify five stocks — with big potential — that should soar as the reopening unfolds.

But you won’t find these stocks listed on the Dow or the S&P 500.

Nonetheless, these stocks could generate gains 900% larger than many popular stocks over the next few years.

After sinking below 700,000 last week, the Labor Department reports first-time unemployment claims jumped to 719,000 for the week ending March 27, contrary to economists’ expectation of 675,000. 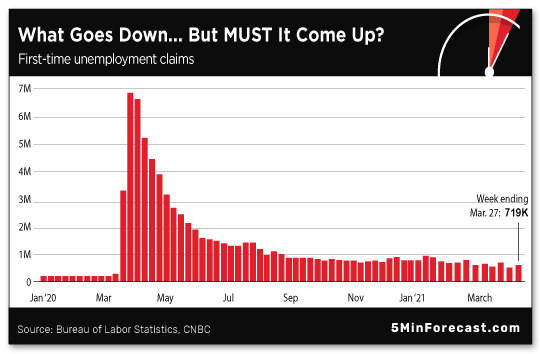 Need we repeat, that number is moving in the wrong direction, and still obstinately above the worst of the Great Recession.

As if unemployment claims couldn’t be further removed from the rest of the economy, the March ISM Manufacturing Index shows PMI at 64.7, an increase of 3.9 from 60.8 in February. (If you recall, a number over 50 indicates expansion of the manufacturing segment of the economy.)

The other side of the coin? “Extended lead times, wide-scale shortages of critical basic materials, rising commodities prices and difficulties in transporting products are affecting all segments of the manufacturing economy,” according to ISM chair Timothy Fiore.

“The drama with so-called ‘Reddit stocks’ has taken some key players out of the market in a way that could ultimately backfire on investors,” says income and retirement specialist Zach Scheidt.

“A short seller is simply an investor who bets that the price of a stock will trade lower,” he outlines. “Technically, these traders borrow shares of stock from a broker and sell them at one price. They hope to buy the shares back at a lower price before giving the shares back to their broker.

“You can probably see why these traders get a bad reputation with other investors,” Zach says. “After all, whenever traditional investors lose money in the market, chances are good that a few short sellers are making money.

“While short sellers might strike you as predatory or heartless,” says Zach, “these Wall Street ‘predators’ play an important role in the market’s ecosystem.

“Whenever a short seller borrows shares and sells them in the market, they will eventually have to buy the shares back,” he says. “And the broker they borrowed the shares from typically charges interest for those shares and will want shares back eventually.

“So anytime a particular stock’s shares are sold short, you can be sure that at some point, these shares will be bought. It’s the purchase of said shares that helps stabilize the price of a stock and keep it from falling too far.

“Short sellers can also help to send shares sharply higher,” Zach says. “Remember, short sellers lose money when stocks move up in price,” he notes. “And if a stock trades high enough, the short seller will lose too much to hold onto the position and will eventually have to buy shares back.

“That’s exactly what we saw when shares of GameStop shot higher earlier this year,” says Zach.

“So what happens when a cultural shift and social media channels on Reddit target short sellers and run them out of the market?” Zach asks.

“Without this important part of our financial ecosystem, we could be leaving certain areas of the market vulnerable to big risks,” he says. “And these risks could hurt unsuspecting investors.”

To wit, notice that short selling stocks is at near-historic lows… 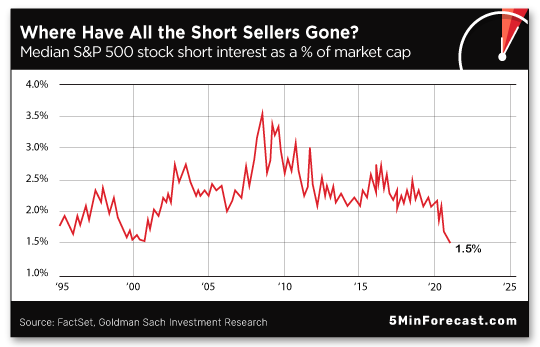 “The last time short interest (the level of stock shares sold short) was this low,” Zach says, “we had the dot-com crash that sent many speculative tech stocks sharply lower.

“It’s worth considering that without short sellers already committed to buying shares that they’ve borrowed,” he says, “a sell-off in the market’s most speculative stocks could wind up being even more damaging.

“By running the short sellers out of the market, we’ve essentially taken a motivated buyer out of the picture,” Zach concludes. “This could lead to a bigger drop in speculative stocks than we would have had if short sellers were more involved.”

So how do everyday investors protect against potential dot-com era volatility?

Zach consistently recommends investing “the majority of your wealth in solid companies that generate reliable profits and pay lucrative dividends.

Zach also encourages investors “to take limited positions in more speculative stocks.” For example: “It’s perfectly fine to take a small position in a company that may have a breakthrough technology (and may not have revenues or profits yet),” he says.

Balance is key: “This approach lets you generate profits from some of the dynamic companies capturing investors’ attention during special growth periods,” Zach says. “It also helps you sleep at night knowing the majority of your wealth is protected against vulnerable — and volatile — areas of the market.”

“The… tax increases recommended by both the Dem-controlled Assembly and Senate include higher levies on the incomes of wealthy New Yorkers, estates and corporations,” the New York Post says. This is on top of New Yorkers already paying the highest state and local taxes in the nation: 14% of their incomes, according to the Tax Foundation.

In response, 250 New York-based business leaders drafted a letter to Gov. Cuomo, issuing a reality check: “Ultimately, these new taxes may trigger a major loss of economic activity and revenues as companies are pressured to relocate operations to where the talent wants to live and work.”

They’re not threatening, but…

Jim Rickards observes new taxes would gut the Big Apple in particular: “Companies such as JetBlue, Morgan Stanley and Goldman Sachs are warning that they will relocate some or all of their remaining business operations outside New York City if the tax hikes are approved.”

Jim concludes: “When we destroy cities, we destroy the economic heart of the country. That’s what’s happening in New York City. Let’s hope other cities learn the lesson and don’t hurt businesses more than they already have.”

We’ve been following NYC’s descent into potential ’70s-era insolvency throughout the pandemic… Here’s hoping lawmakers get a clue.

Ahh, another relic of pre-COVID fraud! San Francisco-based startup uBiome rivaled blood-testing company Theranos for its unabashed quackery and ability to manipulate the rich and famous.

But instead of testing blood, uBiome’s husband and wife founders focused on gut health, collecting — ahem — “samples” to ostensibly test for digestive microorganisms. 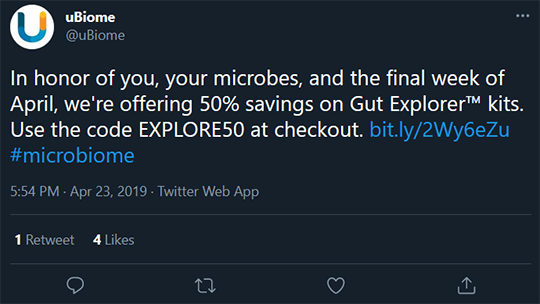 Money down the crapper…

In total, the couple’s accused of swindling consumers and investors out of $99 million.

But back to manipulating the rich and famous, actress Gwyneth Paltrow’s lifestyle website Goop.com named uBiome’s co-founder Richman an “Innovator” of the year in 2018.

Darwin Awards all around…

P.S. After the Spanish Flu pandemic ended in 1920, America saw a decade of extraordinary growth…

This time around, Wall Street legend Dr. Nomi Prins is convinced regular Americans will have an unprecedented opportunity to profit from America’s reopening. (And for the time being at least, she says nobody in the financial media is talking about her top five reopening plays.)

Is Nomi being too optimistic? Fortune favors the bold…