“It’s a new history of a nearly perfect crime,” says metal detectorist Jim Bailey of a mystifying 17th-century coin he uncovered at a Rhode Island pick-your-own fruit farm back in 2014.

At first, Mr. Bailey thought his grimy dime-sized discovery was of Spanish or Massachusetts Bay Colony provenance, but on closer examination, the coin was marked with Arabic text. “Research confirmed the exotic coin was minted in 1693 in Yemen,” says an AP article at The Boston Globe.

“Since then, other detectorists have unearthed 15 additional Arabian coins from the same era” in Massachusetts, Rhode Island, Connecticut and as far south as North Carolina. But there’s zero evidence early American Colonists travelled to the Middle East for trade until decades later…

The discovery of the Middle Eastern coins might solve the mystery of notorious English pirate Henry Every.

Every captained a ship called Fancy, which attacked Indian vessel Ganj-i-Sawai in 1695. “Aboard were not only… worshipers returning from their pilgrimage [to Mecca], but tens of millions of dollars’ worth of gold and silver.”

Every’s band of pirates raped, pillaged and killed the ship’s passengers (as pirates are wont to do) and vanished with the plunder. 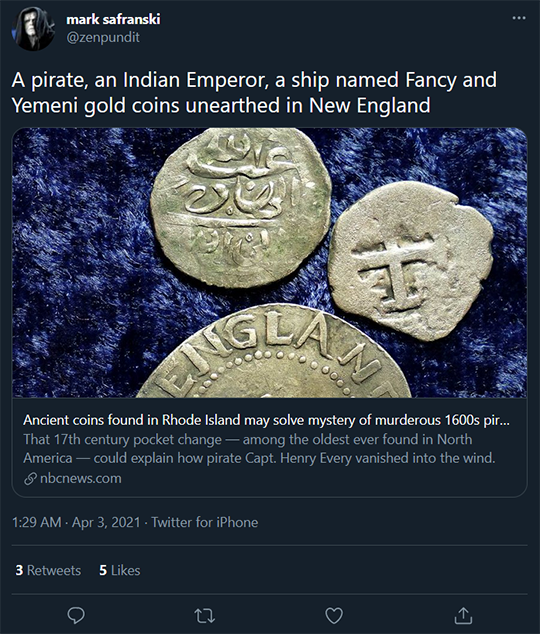 A global manhunt followed — complete with a bounty placed on Every’s head by England’s King William III — but Every’s trail went cold in 1696.

“Bailey says the [Middle Eastern] coins… are evidence the notorious pirate first made his way to the American Colonies, where he and his crew used the plunder for day-to-day expenses while on the run,” the AP says.

“It was almost like a money laundering scheme,” concludes archeologist Sarah Sportman who believes Every’s pirates — and perhaps Capt. Every himself? — might have integrated into Colonial America.

And we notice an inquiring Boston Globe reader left this comment: “Curious as to the value of these 1690s coins.” Well, that’s a little tricky…

“The price of gold is now $2,000 per ounce,” says precious metals specialist Jim Rickards. (And if you’re a reader of The 5, where we keep tabs on gold’s price nearly every day of the week, you know gold hasn’t seen that price since August 2020.)

“Where does my $2,000 per ounce figure come from?” asks Jim. “I’m talking about real gold in coin or bullion form.” To wit, Jim recently reached out to a precious metals dealer with “an order for American Gold Eagles and asked him to get back to me… And he had a lot to say.

“My dealer friend said, ‘Jim, I don’t see this situation changing for the foreseeable future. Gold is scarce and will remain so.’”

Because of physical gold’s scarcity, precious metals dealers are able to tack on an average commission of 15%. “Take it or leave it,” says Jim.

“Anyone who says the commission ‘doesn’t count’ because it’s not part of the gold price doesn’t live in the real world. All transactions have commissions, fees, markups, bid/offer spreads or some kind of transaction costs,” he says.

“Whether you use an in-person dealer or an online dealer and whether the price is ‘spot plus’ or ‘all in’ (with hidden commission) the price of gold is $2,000 per ounce for coins or bullion bars.”

Jim continues: “When you see a price disparity of 15% between the paper and physical markets and hear of two-week delays of physical delivery… you know one thing: Gold is scarce and supply is lagging badly behind demand.

“What do these price disparities, physical shortages and delivery delays tell us about the price of gold going forward?” Jim asks.

“The Comex price is the perceived price of gold. The physical delivery price is the real price of gold,” he asserts. “Some price disparity may always remain for technical reasons, but in the end… the paper price will move in the direction of the physical.

“Comex gold at $2,000 per ounce is coming soon,” Jim concludes. “All that’s required is an interest-rate, economic or geopolitical catalyst. And there’s a long list of those.”

[Ed. note: Everybody has car insurance, health insurance, homeowner’s insurance… But many investors completely neglect taking out some “portfolio insurance” in the form of physical gold and silver.

We’re convinced there’s no better place to purchase physical gold and silver than the Hard Assets Alliance, where you can open an account by following a few simple steps. (Our firm is such a fan of the service Hard Assets Alliance provides… we bought a stake in the company.)

So if you’re a newbie when it comes to precious metals — or if you’ve tried online dealers in the past and you’ve been put off by the complexity — there’s no easier way to buy and hold real physical gold and silver… at exceptionally low costs.

And because of their extensive network of dealers and wholesalers, Hard Assets Alliance continues to work hard for clients… even amidst precious metals shortages.

Plus, Hard Assets Alliance allows you to buy and take delivery of your precious metals… or if you prefer, with a single click you can buy and store your gold or silver in your choice of five audited vaults worldwide.]

“There’s no doubt malls have been under pressure since way before COVID-19 entered the picture,” says former Wall Street banker and author Dr. Nomi Prins.

“Even given the pandemic, when we break down what happened last year regarding retail sales and malls, we see a picture that isn’t so black and white,” she says.

“Once the pandemic hit, mall visits dropped and bottomed out in April 2020,” says Nomi. “But something interesting happened: Mall traffic turned around and began to climb steadily through the summer and well into the fall.

“It wasn’t until COVID cases began to rise again in November that visits dropped off again. Yet mall traffic still managed to rise in December amidst the holiday shopping season – and that’s with stiff online sales competition.

“In January, Tanger Outlets noted that foot traffic at its U.S. shopping centers had returned to pre-pandemic levels, largely due to their outdoor orientation.”

The open-air shopping center has made a comeback, accelerated by the pandemic, and it has major retailers rethinking their mall presence.

“The Gap (which owns Old Navy and Banana Republic), for example, has decided to pull back from mall locations due to high rent and weak performance in favor of placing 80% of its stores in outdoor shopping centers by 2023          .

“With shoppers itching to resume traditional in-store shopping,” Nomi says, “well-positioned U.S. retailers are poised to make a comeback, especially at open-air centers that offer a measure of perceived safety.”

[As for empty malls, NBC reports: “Over the last several months… retail giant [Amazon] has gone on a shopping spree… buying up disused malls across the country and turning them into distribution centers.

“Malls that buckled due to e-commerce or suffered during the pandemic are being given new life by the very entity that precipitated their decline — Amazon.”

We received a landslide of emails responding to Tuesday’s episode “Vaccine Passports.” Truth be told, I haven’t even gotten to the bottom of the digital mailbag, but here’s a sample so far: “I shake my head at Republican politicians and their gasbag media cheerleaders who raise the flag of personal freedom.

“Ask those same hypocrites about abortion or fully legal recreational drug use and see how far ‘personal freedom’ goes.

“Personal freedom should include being able to avoid death. Reasonable people should be able to come to some accommodation without conspiratorial hyperbole.”

“I currently have no intention of taking any of the current vaccines… nor does my wife or my children.

“My wife is a school teacher who has turned down an opportunity to be vaccinated free of charge; she’s taught in person mostly maskless this whole school year. The private school where she teaches, here in Mississippi, has had very few COVID cases and zero hospitalizations.

“Ditto for my business. My 70 employees have not been required to wear a mask or socially distance since the very beginning of the ‘coronadoom,’ and I will not require them to have a vaccine passport to work. (We’ve also had very few cases and zero hospitalizations.)

“It is a shame what government officials and members of the media have foisted upon the citizens of this country, and I believe there are more of us every day who have had enough.”

“Ah, Dave, I have been reading The 5 for a few years now, and I often chuckle at the inane arguments of ‘experts.’

“To my point, Glenn Greenwald’s BS to Tucker Carlson. ‘Grave invasion of bodily autonomy’?! Gave me a real chuckle! If we really believed in people’s rights to control their own bodies, there’d be no problem with abortions and end-of-life assistance would be legal. Hypocritical!

“On a national and global levels, we’ve accepted vaccinations as a way to control many diseases when the needs of the many dictate it. When I travel, many countries require me to prove I’ve been vaccinated for multiple diseases. Why should COVID-19 be an exception?

“Proof of vaccination is simply a ridiculous hill to die on when it comes to personal freedom.

And no “buts” about it, we notice.

P.S. Getting started with Hard Assets Alliance is totally FREE.

Second, you pick the physical gold and silver you want to buy.

Third, you get peace of mind with “portfolio insurance”… physical gold and silver at the Hard Assets Alliance.

Remember, we have a bona fide financial interest in the Hard Assets Alliance. When you do business with them, we are compensated. And because we have a stake in the company, we’re able to fully vet them.

With Hard Assets Alliance, you get top-notch physical bullion, technical security, vaulting services… the works. Along with incredibly competitive pricing.