The Labor Department issued its consumer price index this morning. It jumped 0.6% from February to March. The official year-over-year inflation rate works out to 2.6% — way higher than the 1.7% rate the month before.

But as we warned a few days ago, we’re entering a stretch of time when year-over-year comparisons on a raft of economic numbers will be all out of whack because most everyone was hunkering down in the spring of last year. There wasn’t much of an “economy” going on.

Don’t get us wrong: We’re not downplaying inflation here. As we’ve long said, any resemblance between the official numbers and your own cost of living is purely coincidental.

We bring up food specifically because food and energy costs are running ahead of most everything else at the moment. And those are the costs that affect low-income earners the most.

But in terms of persistently accelerating inflation across a wide array of goods and services, 1970s-style… our Jim Rickards says that’s still not a 2021 story.

“As the global economy continues to recover from COVID,” he says, “we still face significant slack in labor markets and there is excess capacity in providers of goods and services for everything from restaurant meals to manufactured goods.

What’s more, Jim says Chinese manufacturers who lost market share to the United States and Europe when supply chains got all scrambled last year are back in the game. They’re slashing prices to undercut their Western competition and regain share.

“That,” says Jim, “gives a deflationary push to the global reopening.”

And as you’ve probably heard by now, the “reopening” just experienced a major hiccup.

Early this morning, the FDA and CDC recommended “pausing” the use of Johnson & Johnson’s single-shot COVID vaccine “out of an abundance of caution.” That’s because six women developed rare blood clots. Six people out of 7 million who’ve gotten the shot so far. 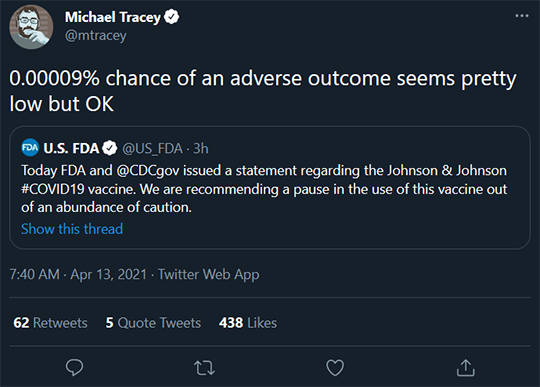 Or in other words… the same bunch of bureaucratic incompetents who said it was imperative to shut down all manner of human activity a year ago “out of an abundance of caution” now say it’s imperative to yank the J&J vaccine because of blood clots occurring at a rate far lower than that of, say, birth-control pills. But no, you and I can’t make decisions for ourselves; we’re just supposed to shut up and listen to the scientists!

Anyway, inflation is shaping up to be a story — perhaps the story — of 2022 and beyond.

And Jim says the big driver isn’t what you might expect — Uncle Sam’s reckless pace of money-printing. (Although that’s nothing to sneeze at, to be sure…)

Instead, it’s the coming demographic meltdown of China — which will choke off the pipeline of cheap consumer goods we’ve become accustomed to for the last 20 or 30 years.

In 1990, most of China’s population was between the ages of 15–40. By 2016, the bulk of the population was age 50–70. And there’s not a big cohort of younger workers coming up through the ranks to take their place.

Jim breaks down the most recent numbers: “The brackets from birth to 20 years old include only about 320 million younger people coming into the workforce in the decades ahead to replace the 420 million workers between the ages of 40 and 60 who will soon retire.

“That leaves a labor shortage of 100 million workers in China compared with recent decades. That shortage is partly the bitter legacy of China’s one-child policy that was introduced in 1980.”

As a consequence, “the Chinese population has stagnated and is aging rapidly. This will require more working-age Chinese to care for the elderly,” Jim continues, “many of whom will suffer dementia, Alzheimer’s disease and Parkinson’s disease.

“The result will be a labor shortage among productive working-age Chinese who will then be in a position to demand higher wages, which will increase costs globally.”

The term “cheap Chinese labor” will be as out of date as a Windows XP computer.

And the story isn’t exclusive to China. “The same is true in Japan, Russia, Europe and to a somewhat lesser extent in the United States.

“There is no avoiding a strong inflationary trend that may persist for 20 years or more as it last did from 1965 to 1985. Inflation is the environment within which all other policy variables will be pursued.

“Central banks will be late to identify the trend (as usual). Inflation will catch them by surprise.

“The losers will be savers, retirees and those relying on insurance, annuities, pensions and fixed-rate bonds to pay their bills. Contrary to what most believe, stocks do poorly in an inflationary environment. Costs for wages, inventories, fixed assets, interest and rents tend to rise faster than revenues, which squeezes profit margins.

“The biggest winners will be those who invest in hard assets such as oil, natural resources, gold, silver and real estate. Certain sectors of the stock market may outperform, especially health care.”

And the dirty snowball begins rolling downhill next year. Start preparing. “As always,” says Jim, “those who move earliest to position ahead of these waves will gain the most.”

In the meantime, stocks are shaking off both the J&J vaccine news and the “budding inflationary pressures” the mainstream is so keen to tout.

Whether it’s the inflation numbers or something else — maybe anticipation of the Coinbase IPO tomorrow — Bitcoin has burst into record territory, over $63,000 at last check.

Small-business owners are adjusting to another “new normal,” judging by the monthly Optimism Index from the National Federation of Independent Business.

The index jumped 2.4 points in March to 98.2. At that level, the index is back in line with its historical average going back to the mid-1970s. On a chart going back to 2010, it looks like this… 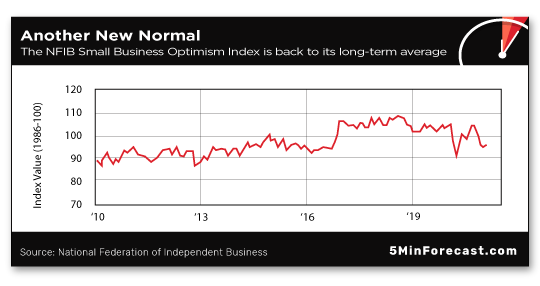 “Main Street is doing better as state and local restrictions are eased, but finding qualified labor is a critical issue for small businesses nationwide,” says NFIB Chief Economist Bill Dunkelberg. “Small-business owners are competing with the pandemic and increased unemployment benefits that are keeping some workers out of the labor force.”

Yup. “Quality of labor” tops the single-most important problem part of the survey — cited by 24% of respondents. Taxes are far back in second place at 17%, with regulations at 14% and poor sales cited by 10%.

The “love trade” in gold is rebounding sharply from last year’s pandemic lows.

The love trade is a term of art by Frank Holmes, chief of the U.S. Global funds family and longtime friend of The 5. It’s how he describes gold demand in Asian cultures — driven by a love for the metal as opposed to the fear of economic catastrophe that often motivates Western buyers.

As it happens… purchases of gold jewelry in China during February, coinciding with Chinese New Year, leaped 2.6 times from a year earlier. That’s according to Japan’s leading financial newspaper The Nikkei.

Meanwhile in India, gold imports leaped 5.7 times year over year during March, a period coinciding with weddings and festivals.

Bargain prices — at least relative to the over-$2,000 highs of last August — can’t hurt, either.

“Dave, there already is something like a vaccine passport,” a reader writes. “I have one, called ‘International Certificates of Vaccination’ issued by the HHS and approved by the WHO.

“Due to numerous humanitarian overseas trips, I have had the full series of Hepatitis A and B (lifetime immunity) and numerous vaccinations for typhoid/diphtheria and shots of immune globulin. All these are recorded in a yellow pamphlet that I carry with my passport when I travel overseas in case passport control in some country demands to see it. (And yes, I have taken numerous hydroxychloroquine tablets, but to guard against malaria.)

“Despite that, I have no intention of getting any of the current COVID-19 shots, and wouldn’t want a ‘vaccine passport’ even if I did get the shots. The little yellow booklet has a valid medical purpose; the ‘vaccine passport’ does not qualify for that.”

After we explored China’s pursuit of a central bank digital currency, a reader (and software engineer) writes…

“Something that has been ignored so long that even the powers that be seem to have forgotten is cybersecurity. What I mean is, the reason they ignore it is because it doesn’t exist.

“Let that sink in.

“Cyber. Security. Is. An. Illusion.

“The internet was designed to share information, not restrict its flow. The original premise for keeping users honest and polite no longer applies (a small group of scientists who would shun anybody caught or suspected of naughty behavior). Every significant system in the world has already been compromised; they probably already have so many back doors installed that any attempts at retrofitting security are less than useless.

“I am including the Chinese digital yuan in this category. With a central server or servers, I would estimate that the probability that it has already been compromised is roughly 100%, give or take a satoshi. (OK, a probability should be between 0 and 1, so 1.)

“The reason cryptos (Bitcoin as currency, the other coins as platforms or software) have actual security is decentralization. By definition, the digital yuan and any other such central bank currencies lack the one feature that provides security.

“Once there is enough commitment to a country’s digital currency, I’d expect a massive attack to occur. Perhaps they’ll wait till all the G20 are on digitals. Perhaps the upcoming Olympic Games.

“To stay outside the system, keep real assets plus cryptos.

“And make sure you have two-factor authentication turned on for any service you care at all about.

“Enjoying both your insights and the back-and-forth within the readership — thanks for continuing to publish both!”

The 5: Wise words. And one more reason we think a vaccine passport is an awful idea; if the White House wants to standardize how the electronic records are maintained, it’ll be that much easier for hackers to get their hands on them.

P.S. It’s at this moment we recall that out of every nine dollars the feds spend on cyber, only one dollar is devoted to cyberdefense.

The rest goes for cyber-offense — messing with China, Russia, Iran, Venezuela and so on.

Us peasants? We’re on our own.