Inflation Game Plan (Not Too Early to Start)

The last time we mentioned Venezuela in any significant way, President Maduro was hyping a national cryptocurrency…

The “Petro” was part of a comprehensive effort to restructure Venezuela’s tattered financial system and bypass sanctions imposed by the U.S. and EU.

This in a last-ditch effort (similar to what Chavez did in 2008) to curb sky-high inflation. To no avail…

Printing the bank note comes after “years of incessant hyperinflation [that] continue to batter the value of the crisis-stricken South American country’s currency. 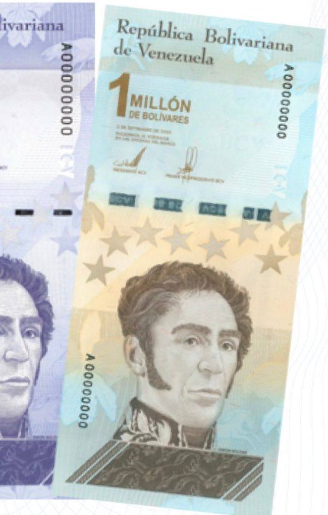 Barely worth the paper it’s printed on…

“The new bank note will be worth just 52 U.S. cents at the current official exchange rate,” Reuters says. Or as one Twitter user puts it, 1 million bolivars can buy one liter of tomatoes at the local market.

As if that’s not stunning enough, “according to the central bank… interannual inflation was running at 2,665% as of January.” Which is down considerably from the height of inflation in 2018 — a stomach-dropping 65,000%.

Another example of hyperinflation?

“I remember the first time I saw what real inflation looks like,” says our retirement specialist Zach Scheidt.

“I was 16 years old and my dad and I were on a church trip to a refugee camp in Croatia,” he recalls. “This was a war-torn area and the camp was set up as a safe place for women and children to escape genocide in the region.

“One afternoon, we walked past a long line of people at the local commissary. I hadn’t seen a line at this place before, and my dad asked our translator what was going on.

“The translator told us that the camp residents received a check each week to help with basic needs,” says Zach. “And because inflation was so high, they lined up immediately to spend their cash as quickly as possible.

“After all, in a day or two, that money wouldn’t go nearly as far. Inflation was literally eating away at the value of their currency day after day…

“I’m remembering this situation as inflation fears start to rise here in the U.S.,” Zach says.

“Now, I’m not expecting any kind of runaway inflation like my dad and I saw in the refugee camp outside of Bosnia,” he clarifies. “But I do think that the risk of inflation is something you should pay close attention to and protect yourself from.”

So in just such an inflationary environment, Zach favors “owning stocks of companies that have tangible products and resources.

“For instance, companies that mine materials like copper, concrete and iron ore should do very well,” he says. “That’s because the physical resources that these companies own will be worth more as inflation causes prices to rise.

“If you own shares of these companies,” says Zach, “your retirement savings can keep up with inflationary pressures.” He proffers four companies — with “tangible products and resources” — to hedge against inflation…

“Rio Tinto (RIO) is a metals and mining stock that should benefit from higher copper, iron ore and other commodity prices,” says Zach. “Another name in this area is Vulcan Materials (VMC).

“You might also consider equipment makers that will benefit from infrastructure projects around the world,” he says. “Caterpillar (CAT) is sort of the go-to name in this category. And I also like Trex Company (TREX), which makes heavy machinery for construction and mining.”

Zach’s takeaway, then? “At this point, we’re still in the very early stages of inflation. That means there’s still time for you to invest to protect your wealth and keep your retirement safe.”

Now for a raft — nay, a boatload — of economic numbers (which lay the groundwork for the market’s action today)…

“Price pressures were evident in both reports,” MarketWatch says. “In New York, input prices hit the highest level since 2008 while selling prices hit a record. In Philadelphia, prices slipped only a bit after reaching a 40-year high in March.”

“The gain in consumer spending — the biggest driver of economic activity — came as the government began distributing hundreds of billions of dollars of stimulus funds to households,” The Wall Street Journal says. “It was the largest monthly gain since last May, during the initial recovery from lockdowns early in the COVID-19 pandemic.”

A figure that happens to be the lowest since March 2020, and certainly lower than the 710,000 Dow Jones economists expected… 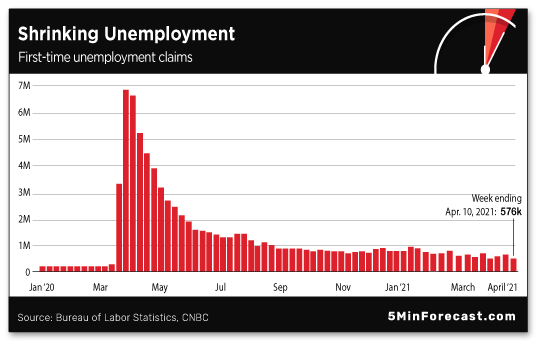 “For 55 consecutive weeks, the number of Americans filing for unemployment benefits was worse than at any time during the Great Recession,” MSNBC reports. (Are you sitting down, readers?) “As of this morning, that’s no longer the case.”

We’ll find out next week if the positive trend continues…

The latest reading from the National Association of Home Builders (NAHB) Housing Market Index comes in at 83 this month, up 1 point from March.

For some perspective, a reading over 50 means builders are optimistic when it comes to single-family home sales.

NAHB Chairman Chuck Fowke says: “The supply chain for residential construction is tight, particularly regarding the cost and availability of lumber, appliances and other building materials.

“Though builders are seeking to keep home prices affordable in a market in need of more inventory, policymakers must find ways to increase the supply of building materials as the economy runs hot in 2021.”

As for existing home prices, they’re increasing at a pace not seen since 2006. Hmm…

“More than 40% of Americans now live in states that have embraced full [cannabis] legalization,” Politico says. And in case you’re keeping track, you can add the Empire State to that tally.

“On March 31, Gov. Cuomo signed a bill that will make it legal for adults to use cannabis in the state of New York,” says our pot stock authority Ray Blanco.

“The newly legalized industry is expected to… bring in $350 million a year in tax revenue,” he says. “But the bigger story — that no one’s talking about — is about the businesses that are expected to come out on top.

“I’m talking about businesses that have a foothold in New York’s medical market.

“Under New York’s previous cannabis laws, medical marijuana companies were required to be vertically integrated to operate,” he says. “That means that from grower all the way to sale they had to go through the same company.

“Historically, vertical integration laws have been used to discourage monopolies,” says Ray. “But in the case of cannabis, they were necessary to make sure the product could be tracked and monitored the entire way through.

“Now New York is forcing recreational players to declare themselves as one category. They either must be a grower or retailer, not both,” Ray says. “The kicker here is that the N.Y.-licensed medical marijuana companies are able to get grandfathered into their previous deal — meaning they can save major costs by cutting out the middleman.”

“So who are the companies that benefit from this grandfather clause?” Ray says.

Ray says: “If you look at these companies over the past couple years you’ll see some wild price swings as well as wildly different pricing and valuation.”

Wanna avoid the wild ride? Ray suggests: “A safer way to play this is through an ETF that holds several of the names on the list. One ETF in particular is the AdvisorShares Pure U.S. Cannabis ETF (NYSE: MSOS).

“Shares have cooled off initially since the surge in February,” Ray says, “but there’s still a lot of room for this industry to grow.

“Federal and local progress is being made all across the U.S. and if you haven’t jumped in the cannabis industry yet,” Ray concludes, “now’s as good a time as any.”

Yeah, about federal legalization: “President Joe Biden has been a conspicuous outlier among Democrats when it comes to supporting marijuana legalization,” Politico says.

On the other hand: “Senate Majority Leader Chuck Schumer [NY] really likes to talk about weed.

“He first introduced a bill to legalize marijuana in April 2018. It was part of his pitch for voting Democrat in the 2020 election, and now — with the majority in hand — he is putting together new federal marijuana reform legislation with Sens. Cory Booker (D-N.J.) and Ron Wyden (D-Ore.).

“I want to make my arguments to [Biden], as many other advocates will,” says Schumer. “But at some point we’re going to move forward, period.“

“The ad in The New York Times says it supports fair and equitable elections,” a reader writes. “Don’t we all?

“They fail to clearly identify how and why the Georgia law does not comply.

“Doesn’t voter ID assure that your vote is legitimate? So what exactly are these idiot CEOs objecting to?

“Actually, I think it is insulting… I doubt that there is a significant number of people who don’t have an ID. It’s purely a political ploy.

“Perhaps conservatives should employ the same tactics of ‘persuasion’ and remind CEOs that we represent half the country. We can use our shareholder voting power to ditch directors and make shareholder proposals.”

“How long are you folks gonna lean on Harry’s quote as your lame-a— justification for owning companies that are bad actors?” gripes another reader.

“Would you REALLY own JPM? And get in bed with Jamie Dimon? Really?

“I would suggest, if conscience matters more than money, that you eschew the purchase of equity stakes in despicable corporate entities. But hey, if all you care about is makin’ a buck any way you can, even if that comes via loathsome and quasicriminal or criminal activity, then welcome to the burgeoning criminal class. You’ll have plenty of company.

“And I thought you guys… were a cut above.”

We try to be, reader, we really do…

Lest you forget, our beat is somewhere at the intersection of finance and politics — not exactly squeaky clean enterprises. That said, we’ll have done our job if we expose the scoundrels… and help principled folks prosper…