If you can’t help monitoring the day-to-day or week-to-week movement in the gold price… you’re probably sighing with relief about now.

On Friday, gold notched a weekly close of $1,776 — a level that’s holding up as we write this morning. Still nowhere near the over-$2,000 record highs of last summer. But as we’ll see today, a return to those highs is in sight.

“The reason for the skid since last summer was not hard to discern,” says our macroeconomics maven Jim Rickards — “rising nominal rates on the 10-year Treasury note. 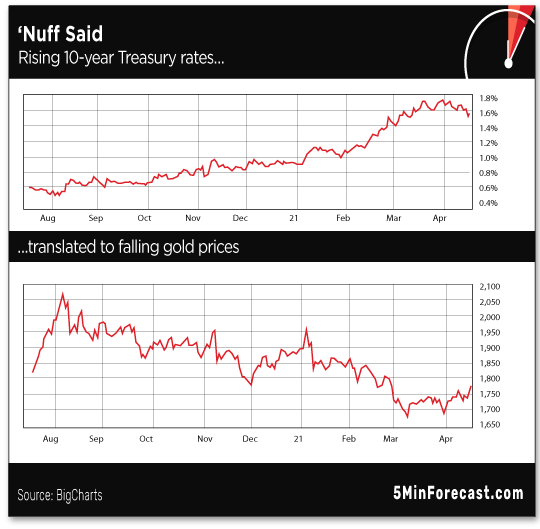 The “reason why” is nearly as simple as the reason itself.

“Markets were watching the $900 billion Trump bailout in December, the $1.9 trillion Biden bailout in early March and the announcement of plans for another $3 trillion bailout later this year,” says Jim.

“The reasoning was with that much money being pumped into the economy and with output capacity still limited by the pandemic shutdowns, inflation must be right around the corner. Rates rose in anticipation of inflation from all of the bailout spending.

“When rates rise, gold often falls because Treasury securities and gold compete for investor dollars. As rates rose, the Treasury notes became more attractive and gold less so because gold has no yield. (By the way, gold is not supposed to have any yield because it’s money; you only get yield when you take risk on securities, money markets or bank deposits. But that’s a story for another day).”

“Hold on,” you might say: If the market was expecting inflation, shouldn’t that have been good for gold?

Short answer: Gold had already sussed out the fact inflation was not accelerating in late 2020.

“Gold has a better track record of predicting economic developments than any other asset class,” Jim explains. “Gold looks so far ahead that investors often cannot see what the gold price is saying.

“The point is that rates were rising on inflationary expectations, but there was no actual inflation. Hard data (as opposed to Wall Street analysis) showed that most of the bailout money was not being spent. Over 76% of bailout money was used either for savings or to pay down debt (which is economically the same thing as saving). Neither saving nor debt repayment constitutes new consumption. And without consumption there is no velocity and no upward pressure on prices.”

“The rate/gold inverse correlation continues, except now it’s working in reverse with rates down and gold prices up.

“I expect this trend to continue because there are still no signs of inflation on the horizon. As a reality check, I always ask myself what would happen if I’m wrong? In the event that inflation does roll in, gold would go up as it always does in inflation.

Jim’s final take: “It’s heads we win, tails we don’t lose. It doesn’t get any better for gold investors.”

Well, except for the premiums on physical metal. The price in the futures market has no relation to what you pay for the real thing. And as we’ve been chronicling for over a year now, the gap between those two prices has widened into a chasm — a transformation that’s likely permanent.

More than ever, it pays to find a dealer that can keep the premiums as low as humanly possible. Which is exactly what our friends at Hard Assets Alliance do. They have access to an unparalleled network of wholesalers to procure the metal you want, when you want it. You can take delivery — or have your metal stored in one of a half dozen vaults around the world, designated with your name on it. They also offer precious-metals IRAs. (Sorry, your only option there is storage in a domestic vault — IRS rules.)

You can get started with Hard Assets Alliance by following this link. Note that our firm owns a piece of Hard Assets Alliance, so you can expect we’ll collect a small cut once you fund your account. But the reason we made that investment is that we were already impressed by how they were doing good by our customers.

To the markets, where the big story is a sudden downdraft in cryptocurrencies.

Bitcoin took a 15% spill yesterday — perhaps because of rumors the Treasury Department is looking to charge several financial institutions with money laundering with the aid of crypto.

For all we know, it’s true. Then again, someone might have been trying to generate a reaction — hoping to scoop up more crypto at bargain prices. In which case, they can snag Bitcoin for $54,371 as we write; it was still over $60,000 only 48 hours ago.

The major U.S. stock indexes are all in retreat. The Dow and the S&P 500 are both down a half-percent from record closes set Friday. The Nasdaq is down about 1% and back below 14,000.

“From my perch, the S&P and Dow both look short-term stretched,” says Greg Guenthner, poring over the charts. “But I do think we could see the Nasdaq push to new all-time highs and help prop up everything else before getting anything resembling a corrective move.”

Indeed, one of the major biotech ETFs has given up all it racked up from December to early February… 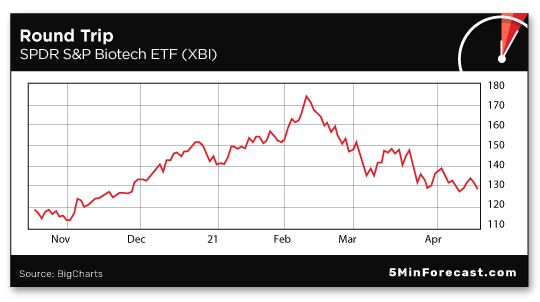 “Moreover, the FTC will be reviewing mergers and acquisitions more rigorously with an eye toward keeping the drug market more competitive. This could potentially cap some upside potential in companies that would otherwise be ripe for acquisition.”

No, Ray’s not leaving the sector for dead. “It just means we have to be picky and choosy. Small companies with breakthrough, lifesaving therapies will still earn huge returns should they successfully run the gauntlet of clinical trials and regulatory decisions.” Ray will continue to track the best-of-breed in his Breakthrough Technology Alert and FDA Profit Alert.

The rural American economy has notched five straight months of growth — according to the Rural Mainstreet Index from Creighton University.

Every month, Creighton economist Ernie Goss surveys bank CEOs in rural areas of 10 states stretching from Illinois to Wyoming. From there, he compiles an index where any reading above 50 indicates a growing rural economy.

From the no-good-deed-goes-unpunished file, pandemic edition…

It succeeded beyond his wildest dreams — raising $41,000.

Then came the 1099 form from Facebook in January — suggesting his tax liability could total $16,031.

“Facebook warns users that money generated from a fundraiser on the social media platform may be taxable if more than $20,000 is raised,” says an Associated Press story.

Goffinet is working with an accountant to somehow reduce the total he owes, due May 17. “Meanwhile, some people in the community are now trying to help him out with the tax bill, so far sending $2,000 in checks to a post office box — not through Facebook.”

“Thank you for what I believe to be a ‘fair and balanced’ (tongue in cheek comment) daily update on things of importance,” a reader writes after we were taken to task Friday for periodically citing mainstream news sources.

“I think it’s folly to not read ALL sources whether left, right or otherwise. When did we decide that we only want to hear and discuss issues based on our personal biases based on lack of diverse information sources?

“Perhaps a history lesson on the turmoil that surrounded the writing of our Constitution would be in order. Out of conflict and controversy come our best decisions as a society. When these are stifled the door is open for power being subverted and taken away from the people, all of us.”

The 5: We’re not sure that gaping-loophole language like the Necessary and Proper Clause amounted to “our best decisions as a society” in 1787… but amen on your broader point.

“I am no fan of those woke sources either, but if you are going to mock them or parody them, you have to quote them first,” writes a reader from South America.

“Of course, they do such a wonderful job of self-parody — in a completely serious fashion — that it is getting hard to discern between straight reporting and satire, but please keep up your efforts. I certainly find them on-point and amusing.”

The 5: Thanks. They’ve started eating their own. Plug the name of New York Times columnist Michelle Goldberg into Twitter today and see what I mean…