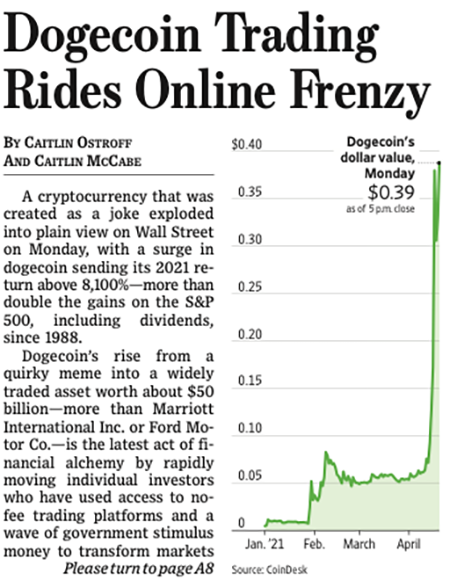 Dogecoin is a parody cryptocurrency that took its name from popular online memes back then — usually featuring a Shiba Inu dog and some sort of funny text. (Guess you had to be there.)

We recall for years, Dogecoin was nothing more than an in-joke among a handful of renegades and outcasts like the gonzo financial journalist Max Keiser.

The phenomenon snowballed and as of a few days ago, #DogeDay became a thing on social media — a concerted campaign to drive up Dogecoin’s price by today, April 20, or as it’s celebrated in cannabis culture, 4/20. 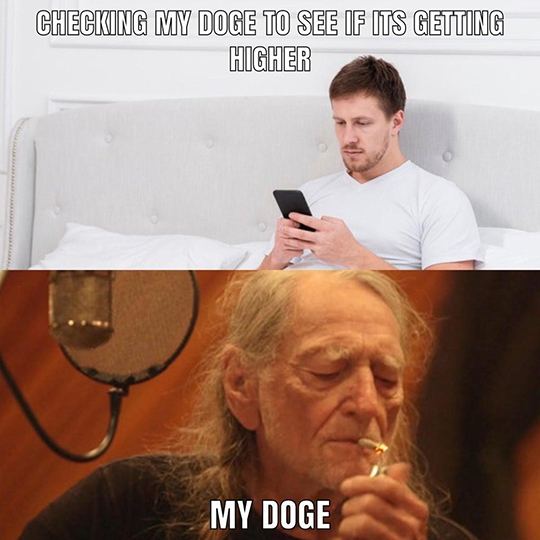 By yesterday — well, check out the chart in that screengrab above. Dogecoin’s market cap exceeded $50 billion — bigger than Ford or Kraft Heinz.

Sure enough, the Dogecoin phenomenon has inspired still more hand-wringing about a stock-market bubble.

Dogecoin “feels to me like a bubble,” says asset manager Robert Drach of Drach Advisors. “That’s always concerning to me, not just for Dogecoin investors, but regular equities investors,” he says in that front-page Journal story.

We’re going to be hearing a lot of talk like this over the next couple of years.

Soon a day won’t go by that there won’t be some story somewhere about some crazy “investment” that someone in the mainstream will latch onto as IRONCLAD PROOF that the stock market is out of control and sure to crash the way it did in 2000 and 2008. Heck, we had another example just last Friday with the $100 million delicatessen in New Jersey.

From where we sit, all of this bubble talk suggests we’re barely a year into the mania phase of a bull market that still has legs.

At the risk of repeating ourselves, every bull market goes through three phases…

In June of last year, we suggested the mania phase of the bull market that began in 2009 was just underway — with stock-market newbies using their first round of “stimmy” checks to bid up bankrupt companies like Hertz.

Nothing since then has convinced us otherwise. If history rhymes — if 2020 is analogous to 1995 — the bull has another three or four years to run.

One of the touchstone moments of the late-1990s mania was Federal Reserve chairman Alan Greenspan’s warning about “irrational exuberance” in the stock market.

Of course, you also want some downside protection. Even during the late-1990s mania, the market took a couple of nasty spills. During the Russian debt-default episode of 1998, the Dow tumbled 18.2% in only seven weeks.

We’ll show you how to lay out a plan for downside protection in the weeks ahead. Stay tuned…

In the meantime, the major U.S. stock indexes are sinking into the red for a second day running.

“While I don’t think we’re headed for some nasty crash right now, I do worry about this market becoming even choppier,” says chart hound Greg Guenthner. “There’s no point in getting too bullish or bearish here.”

After all, it’s been two whole days since the Dow and the S&P registered all-time highs, heh.

Bonds are rallying as stocks are slumping, pushing yields down. The yield on a 10-year Treasury note is now 1.57%.

Crude has pulled back sharply, down $1.65 to $61.73. As an aside, it was a year ago today the price of crude oil futures briefly went negative. As a spooky coincidence, it was 11 years ago today that BP’s Deepwater Horizon oil rig blew up — killing 11 workers and setting off an epic oil spill in the Gulf of Mexico.

OK, this is a little weird: The CEOs of all the Big Six banks in the country have been summoned to a hearing of the Senate Banking Committee set for May 26. Topic — TBA.

And they’ll testify to the House Financial Services Committee the next day.

“We can think of no other time when the committees issued a joint statement to announce they were hauling the most powerful men on Wall Street to testify,” write Pam Martens and Russ Martens at Wall Street on Parade, “without offering a scintilla of information on the topic of the hearing.”

Is it the prelude to a new get-tough approach by Congress?

Maybe, maybe not. The Martenses recall a hearing in April 2019 where congress members threw a farrago of concerns at the CEOs, the result being a slew of headlines — each a momentary sensation that soon flamed out.

With any luck, the committees will tackle the implosion of Archegos Capital Management — resulting in billions of dollars in losses for the Wall Street firms that lent Archegos money with which to make questionable investments. At least this time, there weren’t any major spillover effects on the global financial system.

“There are approximately 3,000 family offices globally,” the Martenses write, “raising the question as to just how many more Archegos-type blowups are still lurking out there.”

It’s not a free country and your property isn’t really yours: “How can an ordinary person afford to wait years after the government takes their car?” wonders Kentucky resident Gerardo Serrano.

On a road trip in 2015, Serrano snapped some pictures of the U.S.-Mexico border on his phone. Customs and Border Protection thought that was “suspicious” activity and pulled him over.

A search of his pickup truck turned up a pistol magazine and five rounds in the center console — not an uncommon oversight among firearms owners.

With that, CBP decided to treat him as an “international arms trafficker” and confiscated the truck under the twisted doctrine of civil asset forfeiture — in which you’re not accused of a crime, but your property is and can be seized without due process.

Actually, CBP never got around to even filing a forfeiture complaint. Only after Serrano sued the feds was his truck returned — two years later. In the meantime, he’d spent $3,800 in legal fees out of pocket before the heroic nonprofit Institute for Justice took up his case.

Yesterday, the U.S. Supreme Court turned him away. 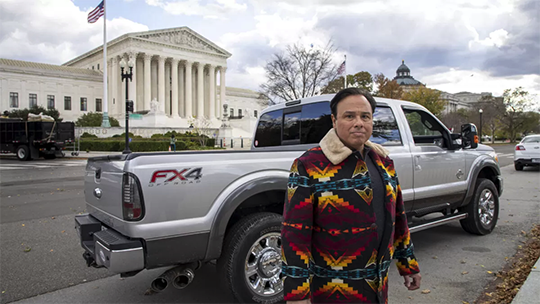 Gerardo Serrano and his truck, denied their day in court [Institute for Justice photo]

Under most circumstances, the feds have to file a forfeiture case within 150 days of a seizure, but that doesn’t apply at the border. The IJ is calling on Congress to fix that discrepancy, seeing as the courts won’t.

Yeah, we’re not holding our breath…

“It is not necessary to talk about inflation and nominal interest rates (that is, two independent variables) as driving the gold price,” a reader writes after yesterday’s edition.

“That can add unnecessary confusion for the reader. The gold price has been well noted to correlate best over time with the real interest rates of 10-year TIPS. The correlation is negative, so gold prices tend to rise when the real yields fall. The real yield is a single independent variable, so is much simpler to discuss.

“Needless to say, the correlation is not perfect. Such things as some investors buying Bitcoin instead of gold as a store of wealth tend to lower the price of gold below what real yields alone would cause. We saw some of that this year also.

“Incidentally, that last point raises the issue that if Bitcoin were to be banned, gold prices could explode, making gold a reasonable hedge for investors who are long Bitcoin, as I am. I am using long-expiration GDX calls to hedge my crypto exposure, in case of a ban.”

The 5: To be clear, Jim Rickards was simply addressing the mindset of the market these last few months — not a broader-scale rule of thumb.

But yes, on that broader scale, there’s a powerful connection between real interest rates and gold. When real rates go negative, that’s incredibly bullish for gold, “because that environment eliminates the historical case for not owning any gold,” explains Jim’s senior analyst Dan Amoss. That is, the “gold has no yield” excuse to avoid the shiny metal is rendered irrelevant.

“Real rates were negative for much of the 1970s,” Dan goes on, “because even though nominal rates were high, inflation was running even higher. In the years ahead, the Fed is likely to pin short-term interest rates at zero, and not raise rates even if inflation rises to 3%, 4% or 5%.”

Meanwhile, we really like your GDX calls as a hedge on your Bitcoin — got all the bases covered!