How Rich Is “Rich”? (Biden and Taxes)

A brief and timely reminder, courtesy of a random individual in the Twittersphere… 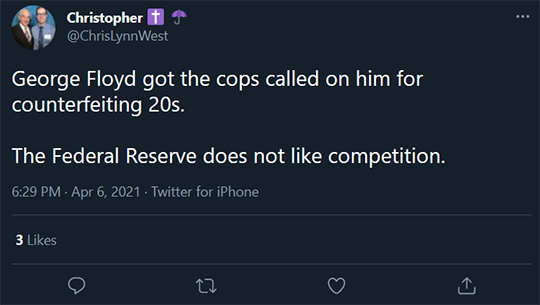 Not much we can add. And so we’ll move on to our main topic…

“At the end of the day, $400,000 in blue areas for families living in Los Angeles; Cook County, Ill.; or Oakland, Calif. is just not the same as it is in, say, Des Moines, Scranton or Dayton. So that’s the challenge right here.”

So says “a former senior Democratic aide” to Politico this week — as Congress gets down to brass tacks on whether to raise individual income tax rates, on whom, and by how much.

The article foreshadows a political donnybrook. What occurs on the other side of it, we can’t say for sure. But it’s not too early to suss out what’s on the table…

First the good news: Contrary to what you might see at some conservative sites, there’s no way in hell the Trump tax cuts will be repealed wholesale. It would be political suicide for Democrats.

Our assessment might come as a surprise if you recall that more than once in 2018 and 2019 we called the Tax Cuts and Jobs Act “the most hated tax cut in history.”

The Tax Policy Center says the law delivered a tax cut to 64.8% of 2018 filers. But the benefits weren’t tangible or visible — in contrast with the Bush tax cuts, where people got a check in the mail.

For W-2 wage-earners, the savings were spread across 26 paychecks a year — who’s going to notice that? In addition, any modest bump to their take-home pay was likely offset by higher health insurance premiums, because the changes took place at the start of a calendar year. The cherry on top: The IRS messed up the withholding tables for employers, and some people accustomed to refunds wound up owing money instead.

But for lower- and middle-income taxpayers, there’s simply no way to return to pre-2018 rates without leaving a mark. It would be a colossal political miscalculation — all but guaranteeing the Republicans take back both houses of Congress in 2022.

But then we get to that aforementioned $400,000 figure — and the slippery definition of “the rich.”

On the campaign trail last year, Biden was adamant that “no one” with an income under $400,000 would see a tax increase.

Ah, but Team Biden continues to be purposely vague about whether that threshold applies to individuals or couples.

“That may still sound like a lot of money, but if you live in New York, Los Angeles, San Francisco, Chicago or any one of a number of expensive cities and you factor in, say, three children, state income taxes, local income taxes, property taxes, sales taxes and sky-high housing prices, you can see that this hypothetical couple may be comfortable but not much more than that. They’re a long way from ‘rich’ in their own eyes.”

The $400,000 threshold applied to couples would take the “marriage penalty” built into the Trump tax law… and make it far worse.

Take a gander at the 2021 tax tables, courtesy of Forbes — first for individuals, then for those married filing jointly… 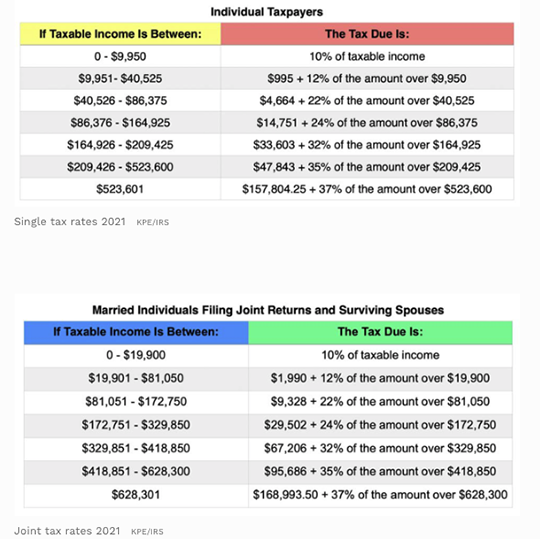 Assuming Team Biden slaps a 39.6% rate on couples earning more than $400,000, this discrepancy would become even more extreme — unless they start monkeying around with the rates for single filers with taxable income below $400,000, and then Biden’s campaign promise goes out the window.

How will they square the circle? At least right now, we don’t know.

But we know this much: The $400,000 threshold would absolutely apply to each individual’s FICA taxes — a move that would (and we’re not exaggerating here) end Social Security as we know it.

As you might know, the feds stop collecting Social Security tax once your earnings top a certain threshold — this year, it’s $142,800.

Biden proposes to start collecting it again after $400,000. And because that $142,800 figure rises each year with inflation, eventually the “doughnut hole” would go away and all income would be subject to payroll tax.

But — and this is something we’ve emphasized ever since House Democrats started plumping for this proposal more than two years ago — those higher taxes paid during your working years would not translate to higher benefits in retirement.

And thus one of the key features of Social Security as it was designed in the 1930s would go by the boards. No longer would it be a social-insurance scheme. It would be an income-redistribution scheme.

And then there are the estate-tax provisions — which would hand still more family-owned businesses over to faceless corporate ownership.

We won’t make your eyes glaze over with any numbers here; right now it’s all hypothetical. We’ll just remind you that the smaller the estate that’s subject to estate tax, the more likely it is the heirs of a family-owned business will have to sell that business just to raise cash to pay the tax. In many cases, an aging founder of the business will sell out and get paid in stock of the acquiring firm. The heirs can sell shares to settle the tax bill.

Warren Buffett acquired many of Berkshire Hathaway’s key holdings thanks to the estate tax — everything from Dairy Queen to Nebraska Furniture Mart.

One reason the news media are so uniformly awful these days is the estate tax: There are hardly any family-owned newspapers or radio or TV stations anymore — owners connected to their communities. The founders or their heirs all sold to out-of-town behemoths.

In the local-TV biz where your editor toiled across the country for two decades, only a handful of families remain. Just a few weeks ago, the Oakleys and Lindsays of Quincy, Illinois — perhaps reading the political tea leaves — sold out to Atlanta-based Gray Television (GTN).

Again, it’s early days: Who knows what will come out of the congressional sausage factory when all’s said and done?

“The administration is still working out the details of the plans,” says that Politico article, “and a number of proposals remain on the table, according to people familiar with the discussions and in touch with the White House.”

We haven’t even gotten into the proposals that might affect small-business owners… or the treatment of capital gains… or the fate of the SALT deduction. We’ll take those on some other day.

Meanwhile, a reminder from Jim Rickards: “The really rich pay very little in tax because they have the best tax lawyers and tax shelters.”

If you’re somewhat less than “really rich,” consider yourself on notice. And we’ll stay on top of the debate in D.C.

The “reopening trade” is giving a lift to the major U.S. stock indexes today.

The Nasdaq Composite is up nearly two-thirds of a percent, within 30 points of 14,000. That’s despite a major disappointment from the ninth-largest company in the index. Netflix added 4 million subscribers globally in the first quarter, but the Street was looking for 6 million; NFLX is down 7% on the day.

Crude’s down more than 1% after the Energy Department’s weekly inventory numbers at $61.87.

“Betting on your favorite athletes and teams is turning into a big business,” says our Ray Blanco.

Thanks to a 2018 Supreme Court decision, sports betting is now legal in nearly 20 states… and legalization bills have been introduced in 20 more.

And in the pandemic era, online and mobile sports betting is taking on a life of its own. New York is looking to take that step: “The state is strapped for cash post-COVID-19, and legalization of things like legal sports wagering and cannabis creates an opportunity to raise much-needed tax revenues… Arizona joined the mobile ranks this month as well with its own online sports betting expansion.”

Ray turned his Technology Profits Confidential readers onto the trend early — recommending Penn National Gaming (PENN) in late 2019. The stock took a huge spill during the corona-crash… and then roared back. 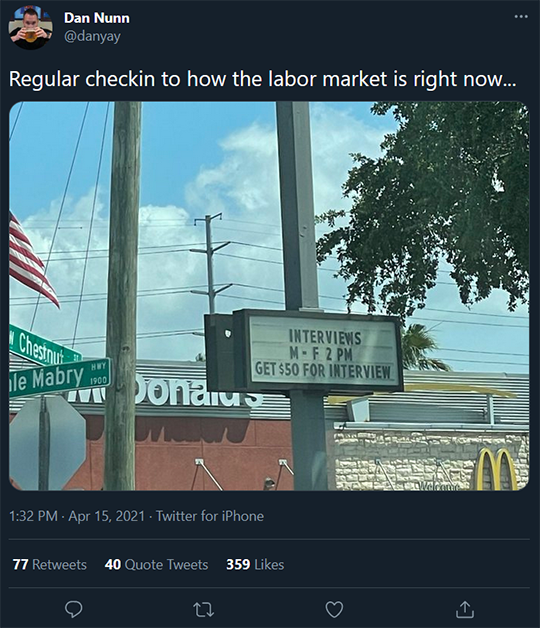 Yes, McDonald’s franchisee Blake Casper is offering $50 for any warm body who shows up for a job interview at one of his 60 locations in the region. And he still doesn’t have many takers.

Casper says it hasn’t been this hard to find help since the late 1990s… and he lays the blame squarely on extended unemployment bennies: “That is truly creating the incentive to not work right now,” he tells Business Insider. “And how do you blame somebody? You can make more money on unemployment — and so, we’ve got to be at least above that.”

Indeed, some fast-food places are holding off on reopening indoor dining — even where it’s allowed. That’s how tight the entry-level job market is — and at a time when traffic is up and people want Mickey D’s new chicken sandwich. Says Casper, “It’s a perfect storm right now.”

“Dave, call me a denier or maybe just dimwitted regarding cryptos, but the volatility is almost off the charts,” a reader writes after yesterday’s 5.

“Then I read about Dogecoin, which was apparently ‘created’ in 2013 as a joke, but now its value has gone crazy. And consider all of the other keystroke currencies.

“Again, does anyone want to buy some very pretty tulips?”

The 5: Yes, the volatility is insane. But remember, the Robinhood generation welcomes the thrill. As we’ve said before, they know they’re gambling… but that’s the only rung on the economic ladder that’s still within their reach.

Meanwhile, as Uncle Sam and the Fed press on with epic money creation… Bitcoin is getting newfound respect as a safe haven from the likes of Ray Dalio, Stanley Druckenmiller and Paul Tudor Jones.

You don’t have to be a crypto expert to know something of substance is happening in the space that wasn’t happening during the “ICO” frenzy of late 2017. We’ll keep peeling the onion…