A Different View on Climate Change

Remember, no matter how you commemorate the day… 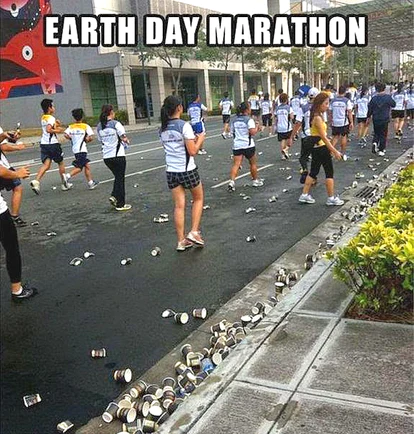 … it’s the literal least you could do.

During opening remarks this morning at the Summit on Climate — a virtual meeting of 40 world leaders — President Biden said: “All of us, and particularly those of us who represent the world’s largest economies, we have to step up.”

“The new pledge will mean huge changes to the American way of life,” says the BBC helpfully. “Coal will have to disappear from the electricity mix, while gas-guzzling cars and trucks will have to go electric.”

And it’s a bold pledge from Biden at the first major climate meeting of 2021, ahead of November’s COP26 in Glasgow where 200 world leaders will presumably gather.

Now for an uncommon take on the environment, founding editor Addison Wiggin had a recent conversation with oceanographer, author and founder of think tank the Rising Seas Institute John Englander.

Mr. Englander “has a unique approach to something that we talk about from time to time, climate change and its impact on the political environment,” Addison says.

And Englander’s latest book Moving to Higher Ground sorta says it all: “The ocean’s rising and the coastlines are moving inland all over the world,” he says, “whether we like it or not.

“For 6,000 years — which happens to be the period of recorded human history — the sea level has been stable, the shoreline’s been stable,” Englander asserts. “No wonder we think… it’s permanent.”

But “as temperature changes on the planet over thousands of years, sea level changes…

“A warmer world has less ice and higher sea level,” he explains. “A colder world has more ice and lower sea level. And you can see a very clear pattern about every 100,000 years.

“Ice ages have been happening for 2.58 million years, according to geological history,” Englander says. “They happen every 100,000 years, within a couple of thousand.

Instead? “We’re entering into a warming phase.

“It tracks exactly with the increase in greenhouse gases, which we use for our energy supply,” Englander continues. “There’s no moralization here… That’s a fact.

“There was a natural climate [trend]. We’ve now changed its direction,” Englander argues. “We need to understand this because it’s going to have an economic impact.

“Again, [that ice age cycle] happens about every 100,000 years,” Englander says. “Humans had no impact on that.

“And the problem is now that CO2 has broken out of its normal bounds of 180–280 parts per million, which has prevailed for 3 million years, it’s now at 415 and temperature is starting to follow and so is sea level.”

Englander says this phenomenon is already observable in Greenland, even more so than Antarctica. “I’ve been to both many times,” he says.

“The scale of Greenland is hard to imagine. It seems like a blank spot on the map but… it’s the size of the eastern United States.

“When you go to Greenland and you start seeing these giant glaciers and icebergs and the ice sheet itself — one ice sheet covering the island — you start to realize the immensity of it.

“Now, that’s not going to happen for centuries… but it’s the ice on land melting and either going to the ocean as water or breaking off, calving into new icebergs, which is like adding ice cubes to a glass, which does raise the sea level,” he says.

“[What] we mere mortals do in the next 10 years is truly not going to change the melt rate very much,” Englander says. “And that’s just reality.”

But Englander wants to dispel the doom and gloom: “This is just a wake-up call. I really have no agenda in this but to help people see the world of the future for their kids and grandkids.”

Here in the States: “We tend to think it’s a Miami problem. No. This is every coastal community in the world.”

The economic impact on low-lying areas? “The good news is there’s a limit,” Englander says. “We really only need to be concerned probably with things within 10 feet of sea level at the moment. But that’s a lot… I mean that affects a lot of properties.”

Englander’s conclusion? “We’ve really got to wake up and recognize that sea level and the shoreline are not permanent lines,” he says. “And we must begin to adapt,” says Englander, “hopefully using good economic principles, not just throwing money indiscriminately at the problem.”

“This is especially the case for small-cap companies that are in (or related to) cyclical recovery movement, sustainable energy and infrastructure sectors,” she says. “We believe names straddling both recovery or value stocks, and the new-behavior or growth stocks, should continue to outperform.

“As earnings season rolls on, and the Fed continues to assure markets that dark money will remain plentiful, investor attention will be focused on whether corporate results will signal more of a recovery pattern,” Nomi says.

For the second week in a row, the Labor Department reports unemployment claims below 600,000… 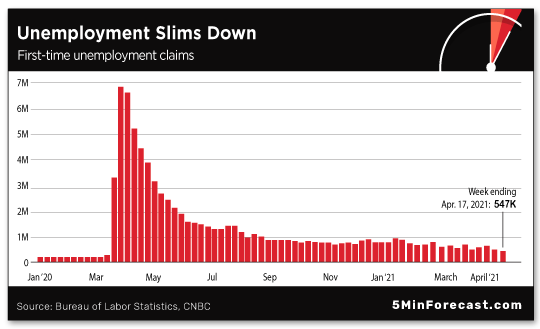 “This is a sharp contrast from a year ago, when early April claims reached a peak of 6.2 million,” CNBC reminds.

According to the National Association of Realtors, existing-home sales dropped 3.7% in March to an annual rate of 6 million units. The median estimate from economists was for a smaller decline: to 6.11 million.

“The sales rate for previously owned homes now sits at its lowest level since August,” says Business Insider. “The median selling price for existing homes leaped 17.2% from the year-ago period to a record high of $329,100.

“Home prices have repeatedly hit record highs this year as the lack of sufficient supply has led owners to demand more when they put their houses up for sale,” Business Insider concludes.

“The big cannabis news this week comes from Congress,” says pot stock authority Ray Blanco, “where a cannabis-friendly bill just passed out of the lower chamber.

“The House of Representatives passed the SAFE Banking Act by a 321-to-101 vote under the leadership of Colorado Rep. Ed Perlmutter.”

As it stands, “cannabis companies often have to resort to cash or complicated workarounds to deal with the current system,” Ray explains. “SAFE would allow banks and credit unions to legally transact with cannabis companies.

“Opening up the banking system should reduce some business expenses for cannabis companies, improve profitability or, hopefully, lower the price of cannabis for users.”

“Pew has been tracking American attitudes toward cannabis since 1969, and the public view has become incredibly pro-cannabis.

“The latest poll shows over 90% of the public favors marijuana legalization in some fashion,” says Ray. “Fewer than 10% are against any kind of legalization… 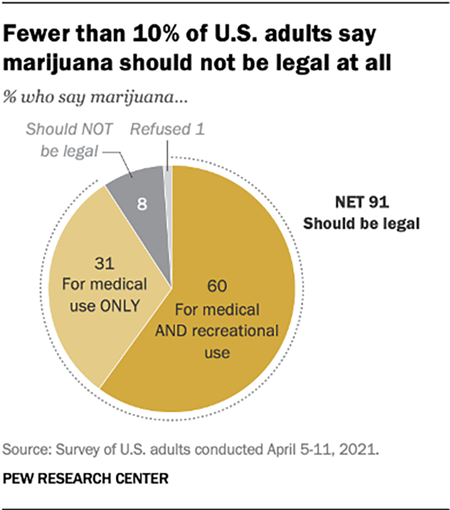 “This is significant,” Ray says. “It’s rare these days to get so much of the public agreeing on any one issue. (Heh… marijuana is the one issue most Americans see eye-to-eye on?)

“The House’s vote is likely to find significant support in the Senate,” says Ray. “Last month, the Senate’s version of SAFE was introduced with nearly a third of the senators signing on as co-sponsors.

“But we may see even greater reform in the Senate soon,” he says. “Majority Leader Chuck Schumer is intent on shepherding a federal legalization bill through his chamber, with or without President Biden’s support.

“If Schumer does what he says, we should see something filed in the Senate very soon,” Ray says. “And he won’t be alone, as a number of senators are joining him.”

“New York recently approved recreational cannabis,” he says. “Last month I pointed out that Columbia Care (OTCQX: CCHWF) has a significant footprint in the state and the means to expand.”

According to the company’s website: “Columbia Care is one of the largest and most experienced cultivators, manufacturers and providers of medical and adult-use cannabis products and related services with licenses in 18 U.S. jurisdictions and the EU.”

This bit of quirk caught our attention because it has it all: Florida man… Dogecoin… and even NFTs! (It’s almost too good to be true?)

Jacksonville resident James DeMarco got an earful on social media after he posted that he unplugged his wife’s dialysis machine in order to mine — what else? — Dogecoin.

“DeMarco stated that the outlet was the only one left in the house capable of supplying the 20 amperes necessary to run the rigs and that ‘his wife didn’t really mind,’” says an article at The Stonk Market.

This isn’t Mr. DeMarco’s first 15 minutes of social media fame. His first brush with infamy came late last year after he was “caught on video trying to jump a dirt bike over a flaming pile of Mountain Dew boxes, when he caught fire and fell into a nearby drainage ditch.”

The video was reportedly shared more than 100,000 times on TikTok… “and was recently minted into a NFT which sold for $35,000 on Rarible,” the article says.

Heh… we were almost taken in: The Stonk Market is a satirical website that lampoons the financial industry.

And we’d say they have plenty of fodder… We’ll be back tomorrow.