The mainstream is finally recognizing that a new era of the mom and pop investor has arrived.

Or in honor of all those still-childless millennials who’ve discovered the stock market during the past year, perhaps it’s the era of the Brittany-and-Brandon investor. 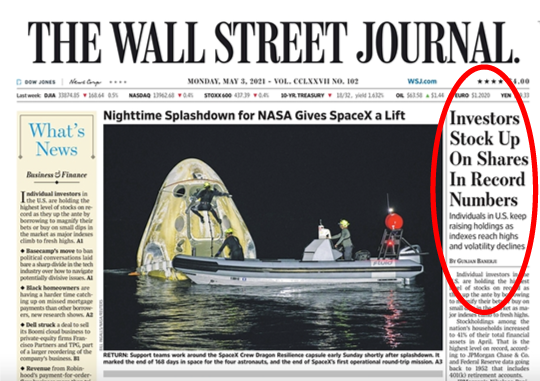 According to figures from JPMorgan Chase and the Federal Reserve, stocks now account for 41% of financial assets held by U.S. households. That’s the highest ever in a data set going back to 1952 — and up sharply from 30% when the stock market bottomed in March of last year.

JPM chalks it up to both growing stock purchases and rising stock prices – and, of course, the legions of “Robinhoodies” and others who started dabbling in the market with their stimmy checks while stuck in lockdown a year ago.

Cue the fretting that it can’t last: “Retail investors have made a lot of money on many things including equities over the past year,” says JPM’s Nikolaos Panigirtzoglou. “At some point, given how high their equity allocation is, the risk is they decide to get out and take profits.

“That is effectively what happened before in 2000.”

It was starting in 1995 that the internet brought new mom and pop investors into the market — folks previously put off by the thought of picking up the telephone to place a trade.

What resulted was the final and most lucrative phase of the 1982–2000 bull market. In 1996, that final phase was well underway — but by far the biggest gains were yet to come.

Now here’s a mind-bender: In the present bull market, sell-offs are not encouraging panic selling. Rather, it seems these newbies are buying the dip.

From that front-page Wall Street Journal article this morning: “Data from research firm Vanda Research show that individual investors tend to buy more shares when the S&P 500 is down 1% on the day than when it is up by the same amount, and that their resolve to buy during sell-offs has strengthened during the pandemic. Some have even borrowed to amplify their stock market bets.”

If we’re early into the final mania phase of a bull market that began in 2009, we’re talking about a lot of people who have zero experience with a big sell-off.

Not even enough to trigger headlines about a “correction,” much less a bloodbath. Brittany and Brandon are so new to the stock market they don’t even have a recollection of the near-20% drop in late 2018!

So while Mr. Panigirtzoglou is probably off-base with his 2000 analogy, it’s not at all far-fetched to think sooner or later, retail investors will “get out and take profits.”

The year 1997 brought the “Asian contagion” — a series of currency crises starting in Thailand that ultimately sent the Dow tumbling 12.4% in three weeks. More than half of that drop came in just two days. On the second day, the drop was so steep that trading was halted twice in a 90-minute span.

In 1998, the Russian government defaulted on its debt, an event that took down the hedge fund Long Term Capital Management and very nearly took down many of the major U.S. banks. In seven weeks, the Dow took an 18.2% spill.

Of course, after that the market went on to set one record after another throughout 1999 before the final blow-off top in early 2000.

Back to the present moment: Forget Brittany and Brandon. Let’s talk about you.

For our purposes today, we’ll assume you’re not a millennial. The newsletter audience “skews old,” as the saying goes.

Unlike Brittany and Brandon, you’ve experienced your share of thrills ’n’ chills in the markets. You lived through the Panic of 2008 and almost certainly the dot-com bust as well.

Perhaps you also remember 1997 or 1998. Perhaps you remember selling a fair amount of your stock holdings, fearful you’d forfeit all the big gains you’d already racked up. Perhaps you sold near the bottom of those sell-offs… and didn’t buy back in until much later, missing out on a huge chunk of the subsequent rally, for which you spent months kicking yourself.

Sound familiar? And wouldn’t you like something to give you peace of mind if another 1997 or 1998 event is coming down the pike?

In a few more days, we’ll take the wraps off a strategy to accomplish just that — give you peace of mind so you won’t sell in a panic and leave money on the table. Stay tuned…

In the meantime, it’s a mixed bag today for the major U.S. stock indexes.

The Dow is back above 34,000 — indeed, within spitting distance of its record close set two weeks ago. The S&P 500’s rally isn’t as strong — but the index is just four points away from 4,200. The Nasdaq is down a third of a percent, though — and slipping further away from the 14,000 level.

Among the buzz-worthy names is Berkshire Hathaway — up more than 2% now that there’s a succession plan “if something were to happen to me tonight,” says a 90-year-old Warren Buffett. Greg Abel would take over as CEO in such an event.

Elsewhere, Verizon is up three-quarters of a percent after giving up on its 1990s nostalgia trip, selling off AOL and Yahoo for $5 billion to the private-equity outfit Apollo Global Management.

Earnings season, you ask? To date, it’s been epic. “86% of companies have beat estimates,” says our floor-trading veteran Alan Knuckman.

And yet the market’s gone more or less nowhere for two weeks. What gives?

“It looks as if we need to adjust for longer time frames in the market we’re in now,” says Alan. “We’ve been seeing fewer big melt-up moves and more steady crawls upward.

“This is fine! It only requires a little extra patience.”

If options are your thing — as they are for Alan — the adjustment is “as simple as buying extra time until the option’s expiration date. By doing this I’m essentially buying myself the extra time I might need to be right.

“An extra two months is a huge amount of time in the options world! And depending on the options you’re playing, it might not even cost too much extra for that added time security.”

We’d be remiss if we overlooked the passage of 10 years since the death of the man who pulled off what we called the most brilliant leveraged bet in history.

It was a decade ago yesterday when U.S. special forces shot and killed Osama bin Laden.

Hours later, we recalled the words attributed to bin Laden in a speech delivered shortly before the 2004 presidential election: “We, alongside the mujahideen, bled Russia for 10 years until it went bankrupt and was forced to withdraw [from Afghanistan] in defeat… So we are continuing this policy in bleeding America to the point of bankruptcy.”

We also ran the numbers that day: The final report of the 9/11 Commission estimated al-Qaida spent about $500,000 to carry out the Sept. 11 attacks. Meanwhile, 10 years of the “War on Terror” had cost Americans $1.26 trillion, according to the Center for Defense Information.

And the return keeps compounding.

Brown University’s Costs of War Project estimates that Washington, D.C. “has spent or obligated $6.4 trillion on the post-9/11 wars in Afghanistan, Pakistan, Iraq and elsewhere.”

This comprehensive figure includes veterans’ health care and interest on the war’s portion of the national debt.

Supposedly the United States will be withdrawing from Afghanistan for good later this year — to free up resources for taking on China at some future time. Guess it’s Beijing’s turn to “bleed America to the point of bankruptcy”… 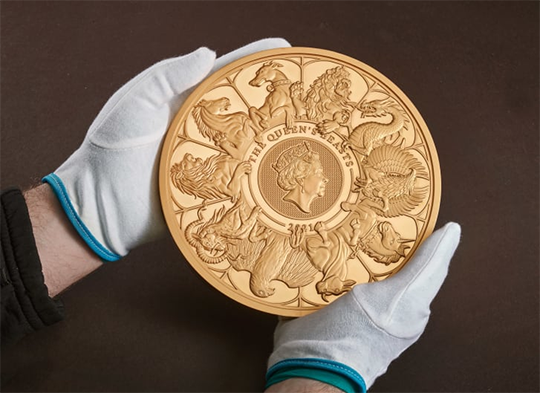 The U.K.’s Royal Mint has just produced the biggest gold coin in its 1,100-year history.

Weighing 10 kilograms, or 22 pounds, it’s part of the Queen’s Beasts Collection — a series of commemorative issues based on 10 statues created for Queen Elizabeth’s 1953 coronation. Here, all 10 of the beasts appear on a single giant coin — which took 400 hours to produce, including four days of polishing.

The coin has already been sold to an anonymous buyer for “an undisclosed six-figure sum,” reports CNN.

Replicas of the coin, however, can be had for as little as $18.

“Before you print things (which implies to me that you think what you print is probably true) you really should do just a bit of non-partisan research,” a reader writes after we recently devoted some of our 5 Mins. to the views of John Englander.

“Otherwise, like in this case, you appear as stupid as those liberals who believe anything put out by the left. What did you think the founding editor of a think tank named ‘the Rising Seas Institute’ and author of a new book Moving to Higher Ground was going to say about global warming? Perhaps there’s a motive in your message! Just saying.”

Sometimes, believe it or not, we’re humble enough to give space to the views of someone who simply has something interesting to say, even if we’re not sure he has us convinced.

It’s in that spirit we presented the views of a fellow who believes, generally speaking, that climate change is for real and people should prepare to adapt, especially if they have investment exposure to coastal real estate. Alas, people automatically jump to the conclusion that either 1) he’s a green-energy grifter or 2) he demands all of us revert to a pre-industrial lifestyle.

Neither is the case. And we take a back seat to no one in our skepticism of the climate alarmists’ motives. But present-day tribal loyalties apparently don’t allow for any subtlety and nuance…