“Move along, nothing to see here.” That’s our executive summary of the Federal Reserve’s twice-yearly Financial Stability Report.

Sure, there was some boilerplate about the potential for trouble if there’s a hiccup in the recovery from the pandemic — in which case “a range of asset prices could be vulnerable to large and sudden declines, which can lead to broader stress to the financial system.”

Otherwise, no worries: The banks, we’re told, are still well capitalized. Leverage among the broker-dealers, they say, remains low.

The Fed report whistled past the graveyard where Archegos Capital Management will soon be interred.

“Archegos Capital is preparing for insolvency,” the Financial Times reported on Wednesday, “triggered by banks’ attempts to recoup some of the $10 billion they lost on its soured bets in March.”

The key word there is “attempts.” What if those attempts fail? Or only partially succeed? Do we even know the full list of which banks were exposed to the reckless bets placed by Archegos founder Bill Hwang? And by how much?

And the most unnerving question of all: How many other Archegoses (Archegii?) exist? “The system can’t take many more of these,” says Lawrence McDonald.

McDonald witnessed the 2008 implosion of Lehman Bros. from the inside and wrote a book about it called A Colossal Failure of Common Sense. His assessment of the present moment comes during a recent interview with the journalist Matt Taibbi.

As you might recall, Archegos is the “family office” — an unregulated hedge fund, basically — that blew up when Hwang’s leveraged long positions in a handful of companies started going sour.

Those positions relied on an obscure financial instrument known as a total return swap. Taibbi describes how they work: “In return for collateral, banks would buy his targeted stock in four, five, six, even seven times the amount posted, then hold it on their own balance sheets. If the stock went up, the banks paid Hwang. If it went down, Hwang owed more.

“The arrangement allowed Hwang to evade SEC regulations requiring any investor who amasses more than 5% of any stock to issue a public filing as a beneficial owner.”

Using total return swaps, Hwang effectively controlled one-third of ViacomCBS — until VIAC shares started selling off and the whole scheme quickly went kerflooey. It was “a setup that created massive systemic risk,” Taibbi writes, “but to the banks looked like an easy source of funding and management fees.”

Total return swaps fall under the category of “equity derivative contracts” — leveraged bets tied to stocks. The banks’ exposure to these contracts has exploded more than fivefold since the Panic of 2008.

Pam and Russ Martens at the Wall Street on Parade website have spent some time poring over the numbers from the federal Office of the Comptroller of the Currency.

“According to the OCC’s most recent Quarterly Report on Bank Trading and Derivatives Activities, for the quarter ending Dec. 31, 2020, equity (stock) derivative contracts at federally insured banks and savings associations have exploded from $737 billion (notional or face amount) since the Wall Street banks last blew themselves up in 2008 to $4.197 trillion notional as of Dec. 31, 2020. That’s a staggering increase of 469% in just 12 years.”

For the record, only four banks account for 88.4% of these leveraged bets — JPMorgan Chase, Bank of America, Citi and Goldman Sachs.

Don’t get us wrong: We’re not saying now’s the time to sell everything and start stuffing cash in the mattress.

We are saying it’s prudent to lay on a special kind of protective trade — using as little as a few hundred dollars — to cover your potential losses. “Disaster insurance,” as our floor-trading veteran Alan Knuckman calls it.

Because if there’s another Archegos out there… then for all we know, next Monday could be the next “Black Monday,” the stuff of market legends. With a disaster-insurance trade in place, you can set yourself up to make 40 times your money — more than offsetting any paper losses among your other holdings.

Days ago, I debriefed Alan about how this trade can bring you peace of mind at a moment your friends and neighbors will be in a state of either panic or shell-shock. Please, give it a look right now. You can come back to the rest of today’s 5 later.

To the markets — which are reacting to a dog of a monthly jobs report. The wonks at the Bureau of Labor Statistics conjured 266,000 new (or revived) jobs for April.

In an ordinary economic expansion, that’d be a great number. Coming out of a pandemic and lockdowns? Rotten. Among dozens of economists polled by Econoday, the most pessimistic guess was almost three times higher than the actual number. Worse, the not-bad March number was revised down.

Thus… on the big chart from Calculated Risk, depicting the job losses and recoveries from every recession since World War II, the red line is looking even more wobbly than before… 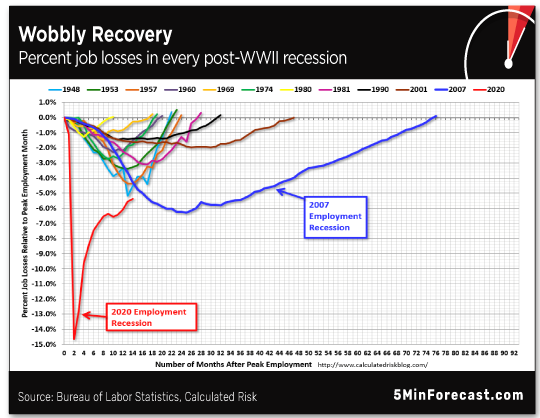 The official unemployment rate edged up to 6.1%. The real-world rate from Shadow Government Statistics edged down to 25.5% — which is still well north of the pre-pandemic month of February 2020, when the rate was 21.3%.

The market reaction is something like: “Oh, wow, lousy job number? That means the Federal Reserve wouldn’t dare do a thing to tighten monetary policy. Buy!”

But the standout among non-dollar assets is copper — up nearly 3% at last check and deep into record territory at $4.72 a pound.

If the government did honest accounting, the national debt would be another half-trillion dollars higher than today’s official figure of $28.2 trillion.

At least that’s our takeaway from a recent Wall Street Journal piece describing the efforts of one Jeff Courtney — commissioned by the Trump administration to do an honest accounting of the federal student loan program.

For the better part of a decade, we’ve bemoaned the drag that student loans are on the federal budget. We’ve also pointed out how the Education Department’s accounting assumes it will never incur losses via the borrower’s default… because under a 2005 law, student loans can’t be wiped out in bankruptcy.

Among the findings from Mr. Courtney’s 144-page reality check…

Bottom line: Out of $1.6 trillion in outstanding student debt owed to Uncle Sam, Courtney figures about $500 billion will never be repaid and taxpayers will be left on the hook.

Perhaps it was. But Team Biden has its own political motivations. Not mentioned in the Journal article is this salient fact: The current president was one of the architects of that 2005 law making it impossible to discharge student loans in bankruptcy.

It’s a little too early in the year for our annual ritual decrying lemonade-stand law enforcement… and so instead we take up the cause of two young entrepreneurs from Bulverde, Texas.

During the big Texas freeze in February, 10-year-old Indiana and 8-year-old Phoenix gave their neighbors the extra eggs laid by the chickens they raise.

After the freeze was over and eggs were in short supply at the stores, her dad, Brian Johnson, made them a proposition: “I told the girls, hey, you know, we have some extra eggs. I’ll tell you what, I’ll open your bank accounts, I’ll get you checks and debit cards. We’ll build you an account and you can sell the extra eggs to the neighbors,” he recalls to San Antonio’s Fox affiliate.

They were pulling down about $70 a week… until some busybody snitched to the city. 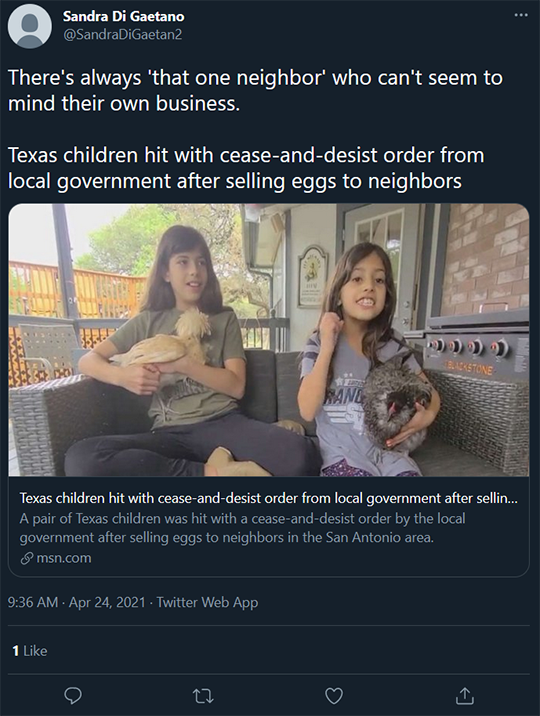 Soon came the cease and desist order, threatening legal action if the girls continued to operate their “illegal business.”

“Highlighting the utterly nonsensical nature of the state is the fact that it is entirely legal for the girls to give away the eggs to the same neighbors,” comments Matt Agorist at The Free Thought Project website. “What this means is that the state only cares when money is being generated and they aren’t getting their cut.”

Thus the girls plan to start giving away their eggs… and if someone decides to offer a donation for their generosity, well, they’ll gladly accept it.

“We will continue to take care of our neighbors, we’ll give them excellence,” Dad says, “and maybe somebody will donate a little bit to knowing all the hard work they do.”

To the mailbag: “With all due respect to Jim Rickards’ comments in yesterday’s edition of The 5, why would the Federal Reserve implement a central bank digital currency if it meant disintermediating its own member banks?”

The 5: An excellent question. The banks always get their vig, right? We’re sure the Fed is scheming on exactly how to make that all work.

Then again, perhaps the ideal time to spring a “CBDC” on the American people is during a financial crisis that will take down the banks for good. If another bailout runs the risk of torches and pitchforks… well, the Fed can just tell the people, “Look, we’ll let the banks go down this time, but if you still want something approximating ‘normal’ life, here’s what we’re gonna have to do…’”

Before we go, one quick response to our inquiry for on-the-ground reports about the state of small business.

“Almost all businesses are open,” a reader writes from Gillette, Wyoming. “Traffic has increased over the last month. I think we are way ahead of most states.

“Schools have been open all year. Kids will soon be out for the summer like normal.

“We didn’t need any federal money to open schools. If teachers don’t want to teach, get new ones!”

The 5: The teacher unions must be mighty weak where you are…

P.S. Once more this week, readers of The Profit Wire have collected a 100% gain — playing call options on the agribiz name CF Industries. The holding time? Less than three weeks.

And that money-doubling winner comes on the heels of two more 100% gains this week, on Pfizer and AT&T.

To be sure, we’ve been making the most of the bull market in The Profit Wire. But as we detailed at the top of today’s 5… now is the time to take defensive measures.

Nothing crazy, no need to head for the bunker. We’re talking about a simple “disaster insurance” trade taking up maybe 1% of your portfolio.

If disaster never comes, well, that’s what “insurance” is all about. You hope it never pays out.

But if it does? In previous market crashes, this sort of trade has been known to make a 40X return.

This sort of “disaster insurance” is always a good idea. But it’s an even better idea now, going into next week — for reasons you’ll understand after watching my exclusive debrief of Alan Knuckman. It’s available right now at this link — but not for long.

The Chinese Communist Party is desperately trying to stay ahead of a demographic time bomb. It will likely fail… and as the bomb detonates, it means accelerating inflation for you and me. Read More

Chuckle as we might at El Salvador’s Bitcoin gambit… if it winds up making any headway at all, President Nayib Bukele risks becoming the target of U.S. regime change. Read More

Literally, this is the thinking in Washington nowadays: If China’s government is going to bigfoot the private sector and make top-down decisions about how to invest in research and development… then we need to do it too! And harder! Read More

Not only is Joe Biden carrying on with Trump’s tariffs, the trade war has mushroomed into full-on economic warfare. Read More