A good question posed by a well-known podcaster, tweeting from North Carolina… 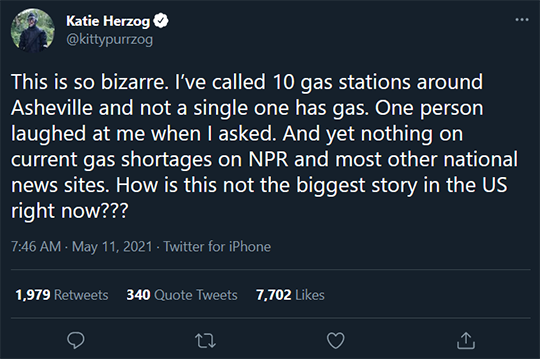 Answer: It’s not the biggest story in the country right now because as we said two years ago, the media agenda is set in three cities — New York, Washington and Los Angeles.

And it won’t be the biggest story until the shortage reaches further north into metro D.C. Once that happens, journalists still working from home (and still masking up despite being fully vaccinated!) will suddenly be deprived of DoorDash deliveries because the drivers can’t fuel up.

Then it’ll be Armageddon on NPR. Heh…

Weirdly, the people who supposedly caused all this chaos say that wasn’t their intent: They were just in it for the bucks.

“Our goal is to make money and not creating problems for society,” says a statement posted on the dark web by a hacker gang called DarkSide. The message hinted that it was actually a rogue affiliate of DarkSide that did the deed and by golly DarkSide will do a better job of screening its customers “to avoid social consequences in the future.”

Indeed, the hack of the Colonial Pipeline was not an act of wanton sabotage. It was a garden-variety ransomware attack: Bwahaha, we hijacked your computer, give us money if you want access back.

But ransomware attacks can have unintended consequences — FedEx deliveries among many other things were fouled up by the “WannaCry” attack of 2017 — and so gas lines and shortages are creeping up the Eastern Seaboard, pretty much anywhere within reach of the blue line on this map from the Energy Department… 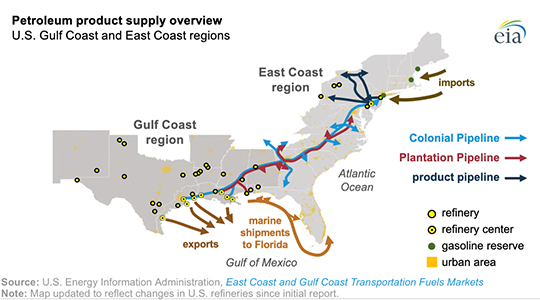 Not much is known about DarkSide. It might be somewhere in Eastern Europe, maybe Russia.

“So far, there is no evidence from our intelligence people that Russia is involved,” said President Biden yesterday. “Although there is some evidence that the actors’ ransomware is in Russia. They have some responsibility to deal with this.”

They do? Pot, meet kettle.

In the spring of 2017, we perked up at the disclosure that out of every dollar devoted to federal cyber spending, only 10 cents goes for cyber defense. The rest is “dedicated to offensive efforts,” reported the Reuters newswire, “including penetrating the computer systems of adversaries, listening to communications and developing the means to disable or degrade infrastructure.”

Even worse was what we learned from the “Vault 7” documents spilled by WikiLeaks around the same time. The CIA discovered scads of vulnerabilities in the hardware and software produced by American high-tech companies. But rather than advise the companies they might want to patch those holes, the CIA instead exploited those holes to sabotage systems in Russia, China and Iran.

In short, much of the hot mess that’s “cybersecurity” in the United States can be laid at the feet of the U.S. government.

And it’s the private sector that will have to clean up the mess.

About 24 hours before the Colonial hack started making news on Saturday, our Ray Blanco recommended a cybersecurity name in Technology Profits Confidential. As we write, it’s up 3% on the day — although to be sure, this recommendation is a longer-term play. (We’ll withhold the name out of respect to Ray’s paying subscribers — you can join their ranks here.)

“Just relying on pure automated tools and software just isn’t enough anymore,” he tells Ray. “Automation is a huge part. But at the end of the day, the nature of hacking is using a system not the way it was intended to be used, which means it’s different by nature a lot of the time, right?

“And so AI tends to be really good at statistics and patterns and all that. I mean, it’s statistics

at the end of the day, right? And so I think what we find the most effective is a good amount of orchestration in automating a merged picture that a human can understand very quickly.”

Our own firm was in the forefront of seeking out cyber investments as long ago as 2013. As Murchison points out, many of those early players relied more on slick marketing than on real protection. As the industry evolves, we’ll continue to stay on top of it…

Stocks are selling off on this Tuesday — and it’s the blue chips taking it the hardest.

The mainstream has settled on “inflation” as its catch-all explanation. Why, we have no idea: The Labor Department doesn’t issue the consumer price index until tomorrow, and the statistical phenomenon of “base effects” is sure to make it look bad — after all, the economy was all but shut down a year ago.

The only obvious sign of inflation among non-dollar assets is in copper — up another 2% today to nearly $4.80 a pound, yet another record.

Not that it’s a surprise anymore, but good help is hard to find for the nation’s small-business owners.

The National Federation of Independent Business is out with its monthly Optimism Index. The headline number for April is 99.8 — up from 98.2 the month before, and the highest figure since November.

But the big story is that a record 44% of survey respondents say they have job openings they can’t fill. “Small-business owners are seeing a growth in sales,” says NFIB chief economist Bill Dunkelberg, “but are stunted by not having enough workers.”

And yes, the report attributes at least part of the problem to unemployment benefits that pay better than a full-time, $15-an-hour job.

Further affirmation is found in the part of the survey asking business owners to identify their single-most important problem. “Quality of labor” is cited by 24%. Taxes are a distant second, cited by 19%, with regulations at 13%. Everything else, including “poor sales,” is in single digits.

While Bitcoin and Dogecoin get all the crypto buzz these days, Ethereum has quietly crested the $4,000 level.

“Ethereum improves on the blockchain capabilities of other cryptocurrencies,” explains our crypto evangelist James Altucher, “by allowing users and developers to run decentralized applications.

“You can think of this almost like an Amazon Web Services which is decentralized. The project aspires to be the ‘world’s computer’ by allowing anyone to run whatever application they like without censorship or controls.

“The cryptocurrency has been on fire over the past month as decentralized applications like NFTs or smart contracts have captured the public attention.”

Not that Ethereum is perfect, James cautions.

An upgrade is in the works, but James says it will be more complicated and time-consuming than Ethereum’s biggest fanboys are promising. On the other hand, “Ethereum is currently the leader in smart contracts and has the largest user base and developer pool of any blockchain” — and so he wouldn’t dare bet against it.

“I own some and am planning to hold for the long term,” he tells us. “That said, I’m not prepared to buy more at this price, as I wouldn’t be surprised [for it] to drop dramatically from its current record-breaking levels. Given what we know about the limitations of Ethereum, in my opinion, the current price is just not worth the risk.”

From Detroit, the story of a business owner going above and beyond for his customers and even total strangers.

Tony Sacco owns Mootz Pizzeria and Bar. The handicap parking zone near his business isn’t very well marked. “People come to Detroit, try to support our city and walk away with a $150 ticket, and they feel like they were tricked into it and they kind of were tricked into it,” he tells the Motor City’s NBC affiliate.

His patience snapped when a woman and her kids getting ice cream got ticketed across the street from the pizzeria. “I was talking to my buddy sitting with me and I said, ‘We’re going to go buy some blue paint.’ And we did.” 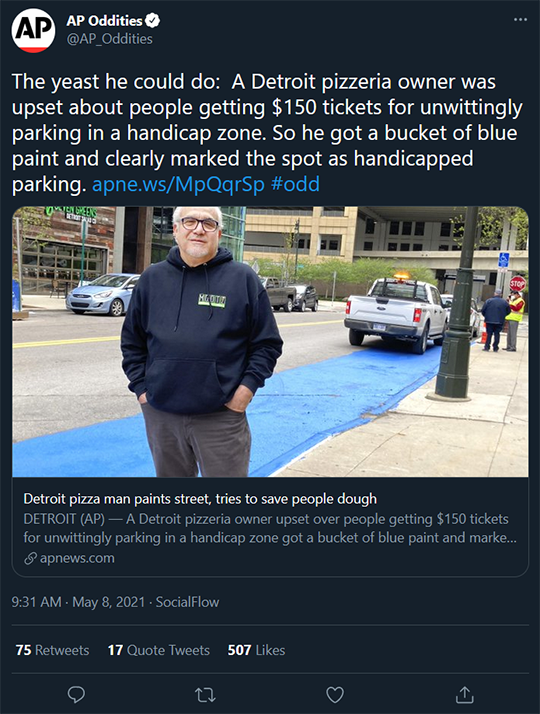 Well, that was just strange enough to attract the local TV crews — which of course then got the city’s attention. The public works director admitted the “signage could have been more clear.” Presumably that will soon be remedied, and in the meantime the city has washed away the paint job.

“I did the right thing,” said Sacco to city traffic engineer Prasad Nannapaneni.

“I’m not sure of that part,” Nannapaneni replied.

To the mailbag, and a practical question: “If central bank digital currencies are forced upon us, how would we use our precious metals as money and stay outside of the government system?

“Would we be forced to underground transactions for everyday purchases using our PMs like cash to maintain anonymity?

“I definitely believe in metals as a hedge and protection, but last week’s CBDC article got me to thinking how we would use them to stay clear of Big Brother if the crap hits the fan.

There’s still enough commerce that takes place with cash in the United States — albeit less than in pre-virus times — that the advent of a CBDC can’t be imposed out of the blue.

That’s why, as we suggested Friday, the most likely entry point for a CBDC will be some sort of financial crisis that has people sufficiently scared that they’ll submit to whatever the powers that be tell them. (Hey, it worked with the virus and with terrorism, so why not, right?)