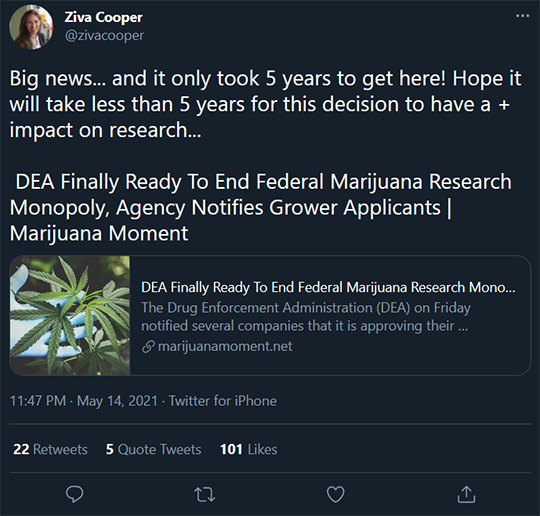 For the past five decades, the University of Mississippi has operated the single federally approved cannabis grow facility in the U.S.

That was supposed to change in 2016 after the Obama administration announced it would accept applications from other marijuana growers to supply cannabis. (For research purposes, of course.) During Trump’s presidency, however, zero applications were approved.

Finally on Friday, applicants received conditional approval from the DEA. “Pending final approval… a number of manufacturers’ applications to cultivate marijuana for research needs in the United States appears to be consistent with applicable legal standards and relevant laws,” said a letter from the agency.

“DEA has, therefore, provided a Memorandum of Agreement (MOA) to these manufacturers as the next step in the approval process.”

It only took ‘em five years… Here’s hoping cannabis has smoothed the way for another “illicit” drug?

“I believe that magic mushrooms are on a similar path,” says early pot-stock adopter Ray Blanco.

Just like cannabis, “powerful psychedelic ‘magic mushrooms’ — containing the active ingredient psilocybin — are considered a Schedule I drug.” And according to the DEA, Schedule I drugs are “substances, or chemicals… defined as drugs with no currently accepted medical use and a high potential for abuse.

“This should immediately raise a bunch of red flags, right?” Ray posits. “The short answer is no.”

Take cannabis, for instance: also a Schedule I drug… even though 36 states have legalized medical marijuana and 17 states have adult recreational marijuana.

And Ray notes: “Thousands of research studies and papers have been published detailing the positive effects of cannabis from treating chronic pain to helping with nausea in cancer patients dealing with chemo…

“[Psilocybin’s] use in the medical world is still being studied,” says Ray, “but researchers have already determined some fantastic positive effects from the drug.”

While cannabis has been found to be effective for pain management, “psychedelic mushrooms have been found to significantly improve the mental health of patients experiencing depression,” Ray says.

In a 2020 study from NYU’s Grossman School of Medicine, researchers found a single dose of psilocybin — in concert with talk therapy — significantly reduced emotional distress among cancer patients.

To wit: “The FDA has granted several public [psilocybin] companies breakthrough therapy status to study the effects of the drug on people with depression,” Ray says.

“And biotechs big and small are diving into this field to determine psychedelics’ applications.”

“With this IPO, we’re seeing more money pour into psychedelics,” he says. “And I expect more and more names to pop up as time goes by.”

Ray will be tracking this trend for his paying subscribers at Technology Profits Confidential.

“Earnings have essentially ended with the slowdown signaling a stock stall,” says our CBOE trading veteran Alan Knuckman. “The major market measures were off last week as the focus shifts from fundamentals for now.”

Fundamentals, you ask? “With over 90% of S&P 500 companies reporting, 86% of them saw positive EPS surprise. That could end up being the highest beat since FactSet started tracking this in 2008,” says Alan.

“The story in stocks is another profit-taking pullback, with tech now 5% off the tip-top of three weeks ago.

Among other big movers today is AT&T — up almost 5% earlier today, now barely in the green…

Back in 2019, we reported hedge fund kingpin Paul Singer was not super keen on AT&T’s ambitions to become a media giant, and his Elliott Management firm took a $3.2 billion stake with which to enforce his wishes.

Now Singer’s wish has been granted: AT&T announced this morning it will unwind WarnerMedia — including CNN, HBO and Warner Bros. — which the telecom acquired for $85 billion just three years ago.

If the sale’s approved, WarnerMedia would merge with Discovery, creating “a new business, separate from AT&T, that could be valued at as much as $150 billion,” CNBC notes. The conglomerate’s new name? TBD…

Mr. Surowiecki, former business writer at The New Yorker, is kinda late to the party… When a major shareholder says you’ve got “operational and execution issues over the past decade,” you’ve got bigger problems than figuring what will be HBO’s next big hit.

The Federal Reserve’s Empire State Manufacturing Index came in strong, more or less as expected at 24.3. Recall anything above zero indicates growth, and the number this year has been steadily ticking up from 3.5 in January.

And the National Association of Home Builders Housing Market Index came in at 83 in May, unchanged from April. In this instance, a reading above 50 indicates builders are optimistic about conditions.

“Builder confidence in the market remains strong due to a lack of resale inventory, low mortgage interest rates and a growing demographic of prospective homebuyers,” says NAHB Chairman Chuck Fowke.

But homebuilders gotta be concerned about lumber prices — up almost 90% from April 2020. Not to mention steel tariffs…

“Policymakers must take note and find ways to increase production of domestic building materials, including lumber and steel, and suspend tariffs on imports of construction materials,” Fowke concludes.

“Trust me, this one tip will save you thousands of dollars over time,” says our retirement specialist Zach Scheidt.

“I bought Coinbase on the day of its IPO,” Travis told Zach. “I only planned to hold it for a short time, but the stock traded lower and now I’m stuck. The more I think about it, the more I believe this will be a three–five-year investment.”

Zach asks: “See what he did there? Travis bought shares of a speculative stock for a very specific reason. He believed the shares would move sharply higher after the company went public. That’s obviously not what happened.”

But like many IPOs, “shares of COIN have been moving steadily lower,” says Zach. “And so just like a rookie investor, Travis made up a new reason to hold onto his shares.

“Whenever you buy into a position, there should be a clear reason why you’re investing,” Zach says. “As long as that reason stays intact, it’s usually a good idea to keep your position on the books.

“But if something changes and the reason you originally bought the stock is no longer valid, exit your position right away!

“When we rationalize a position that isn’t working the way we expected and come up with an entirely different reason to keep owning it, it’s a recipe for loss,” Zach explains.

“When this happens with my investments,” he says, “I like to sell the position entirely, take a day or two to clear my head and then think more objectively about whether there’s another reason to get back into the stock.

“That way, I’m thinking much more clearly and not just staying in a position because it’s too humbling to admit I was wrong.”

The key here? “Keeping a humble perspective and selling a position that doesn’t turn out the way you expect will help you protect (and build) your wealth over time,” says Zach.

Dr. Jack Ogden, president of the Society of Jewellery Historians, says people “are being duped into buying something that is worth a elsetion of what they paid,” The Guardian says. “Although gold, these fakes may not be older than a few months… 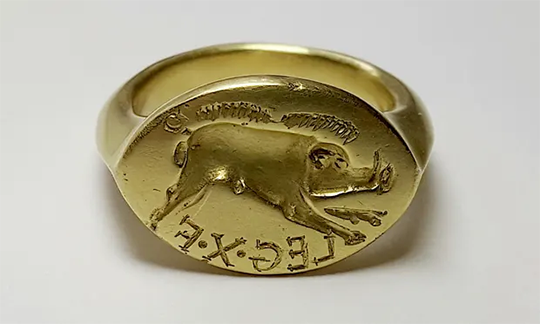 The gold is real… the antiquity is fake.
Photo Courtesy: Dr. Jack Ogden, The Guardian

Through his consultancy work with British museums, auction houses, dealers and collectors, Dr. Ogden now “estimates that half of the supposed ancient gold jewelry he is shown is fake.”

“It’s a bit of everything,” he says. “There’s been some spectacular, supposedly Greek and Roman, gold. A lot of Greek gold, because that’s very collectible. They find pieces or styles they’re able to copy and which are desirable…

“If it stands still long enough, they’ll fake it.”

“Greetings from the great state of Wyoming,” says a longtime reader, responding to Friday’s episode of The 5.

“Sold our house in Cody for a nice profit; closing was one month ago.

“After being jerked around for a month by buyers from Oregon — when they missed another contact deadline — we cancelled the contract, raised the price by $50K and sold for the asking price literally the next day to out-of-state buyers, sight unseen.

“By the way, when we bought the house, a significant portion of the purchase price was paid using physical palladium bars.

“Keep up the good work. I am always grateful for your insight.”

“So I have been following the discussion about the possible imposition of a central bank digital currency,” another reader writes.

“And it got me wondering: What about all those ‘sin taxes’ on cigarettes, alcohol, soda, etc.?

“In the hands of a central authority, they wouldn’t need to tax the heck out of something to discourage its use; they could simply refuse to honor the purchase. (Cigarettes? You can’t buy cigarettes. It’s for your own good.)

“In which case, would the authorities really be willing to forego the revenue? Rhetorical question, I know….”

Indeed… But it would certainly be entertaining to see the feds squirm as they weigh tax revenue versus nanny-statism.

We’ll be back tomorrow….