“Amazon is designating many of its existing Echo and Ring gadgets (and presumably the majority of its new devices from here on out) as Sidewalk bridges,” CNET says.

“That means that they’re equipped to siphon off a tiny amount of your home’s Wi-Fi bandwidth and then use it to relay signals to Sidewalk-compatible devices using Bluetooth Low Energy.”

Here’s how it works: “Sidewalk uses the 900MHz spectrum to extend the low-bandwidth working range of devices, and helps devices stay online even if they are outside the range of their home Wi-Fi,” says Amazon.

Far as we can tell, Sidewalk’s primary advantage for consumers?

“If your internet connection is down,” says an article at Inc., “your smart devices can connect to other smart devices, even if they aren’t in your home.” (Emphasis ours.)

“That’s definitely a nice benefit,” — hmm — “but it’s also where things get a little murky from a privacy standpoint. That’s because other people’s devices, like your neighbor’s, can also connect to your network.” 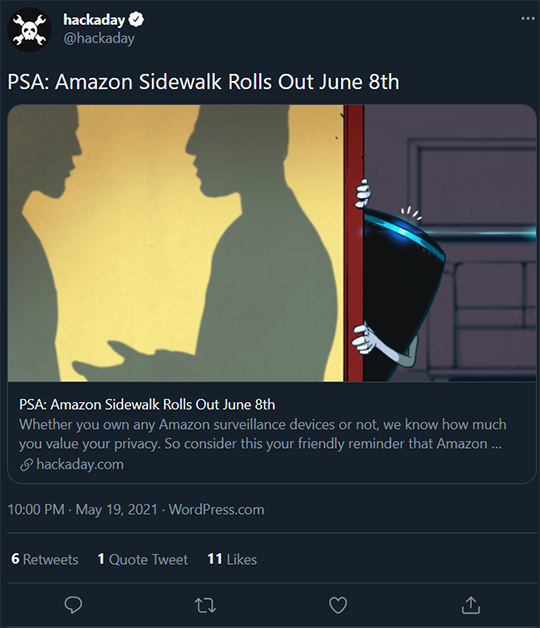 So aside from the obvious privacy issues, to our way of thinking, one of Sidewalk’s most concerning features is the system will be switched on by default, meaning consumers will have to opt out… rather than consciously opt in to Sidewalk.

And on the privacy score, Amazon assures customers’ information is safe with Sidewalk because it uses “three layers of encryption.” Whatevs.

But even if your neighbor’s not accessing your most personal data — say, through his doorbell — you can be sure Amazon is…

“We know how many strawberries you ate last month,” a marketer tells iconoclast investor James Altucher, after he asked her just how targeted advertising has become.

“There is so much data about all of us that [marketers] can predict almost everything about you,” James says. “I know I am using more data. And more industries are using my data.

We sell that information to the dealership next door.”

“But where do you get the data?” James asks.

“The data is everywhere,” James’ software friend tells him. “We scrape data off of thousands of different websites that are now storing all sorts of data about each person.”

“This is the business of the future,” says James.

“What’s the fastest growing industry in the past 30 years? The internet. Who are the richest people now? Internet billionaires: Jeff Bezos, Elon Musk, etc.

“In the 1950s, the fastest-growing industry was oil. The billionaires were J. Paul Getty, the Rockefellers… All oil money,” James says.

But even the internet and oil money are becoming obsolete in the face of Big Data. “Quietly, the latest billionaires are coming from the cloud storage industry,” James notes.

“Snowflake, a cloud storage company that had a huge IPO last year, is now worth $60 billion with $600 million in revenue. The CEO of Snowflake is probably worth over $2 billion now. All since last year.

“Companies typically aren’t worth 100 times revenue. That’s ridiculous. UNLESS there is inflation. In which case, it’s normal.

“Right now everyone is throwing a fit about inflation.” Instead, James advises: “Look around you, be aware of the situation and then benefit from it.

“The data storage/Big Data/AI industry is growing faster than inflation,” he says. “Which stocks should you buy to take advantage? It almost doesn’t matter.

“The industry will grow, the dollar will be worth less and the stocks will go higher and higher…

“I’ve just finished research on a few stocks that are bound to cash in on the momentum in cloud computing,” James says.

“It’s a secret tech revolution only one in 10 Americans knows is happening… and I’m convinced THIS is where we’ll find tech’s next $1 trillion winners.”

See what happened during the world premiere of his big event: “To $1 Trillion and Beyond.”

This might be even bigger than when James famously picked Apple in 2011 to be the world’s first $1 trillion and $2 trillion company. You won’t want to miss this…

We return to something Alan Knuckman said Monday: “Action in the Nasdaq-100 (NDX) between 13K and 14K sets up a rally run to 15,000 on an upside breakout burst.”

If you look at the chart for NDX — a collection of the Nasdaq’s 100 or so biggest nonfinancial companies — 13,000 has held firm through all the market’s volatility this year… 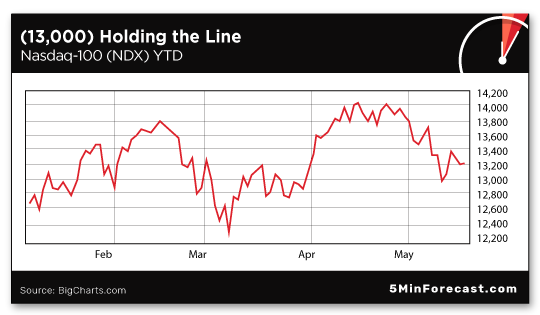 The bounce is uncanny year to date…

“Some 42% of world copper mining production is under political uncertainty that could entail risks on future production,” says Juan Carlos Guajardo of Chilean consulting firm Plusmining.

“In No. 1 copper producer Chile, an overhaul of its market-orientated constitution is underway, and it is debating whether to hike royalties on miners,” Reuters reports.

“Peru, the No. 2 producer, is heading for a polarized June presidential election with a little-known socialist leading in the polls who wants to redistribute mining wealth.”

In copper-rich Andes countries, “political uncertainty” goes a long way toward explaining record-high copper prices of late. To say nothing of rebounding Chinese demand… “as well as rapid development of a green revolution of electrification seen as driving further appetite for the metal in years ahead,” Reuters concludes.

We’ll stay on top of the red metal story…

This chart might become redundant, but for now, it’s still worth the visual…

The Labor Department reports initial jobless claims fell to a new pandemic-era low of 444,000 for the week ending May 15, flying in the face of economists’ expectation of 452,000… 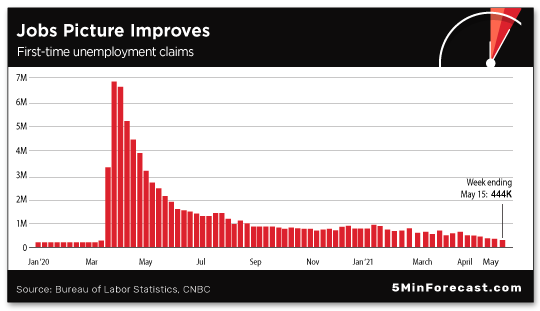 And for some added texture, this time last year new unemployment claims clocked in at 2.3 million.

CNBC says: “While Federal Reserve officials stress the need for more improvement in the jobs picture, the claims numbers suggest that employment is growing consistently.”

“Maine’s Sen. Susan Collins has at least signaled a strong shift from her previous position by co-sponsoring the Secure and Fair Enforcement Banking Act this month,” he notes. “In the House, Republicans are starting to change their tune also.

“Two Republican representatives want to make sure veterans have access to legal cannabis and are sponsoring a bill that would remove cannabis from the scheduled substances list created by the Controlled Substances Act.

“At the state level, Louisiana, Montana and Texas have all passed important cannabis legislation.

“Last month, Louisiana’s House approved a legalization bill in committee that would allow adult recreational use,” Ray says, as well as create a permitted path for individual adults to grow up to six plants for personal use.

Likewise, “Montana… passed a bill through its House legalizing recreational marijuana. The House will revote on the bill with added amendments from the state Senate.

“In Texas, the state House voted to expand medical marijuana provisions and decriminalize the plant,” says Ray. “They added additional health indications like PTSD, chronic pain and cancer as acceptable for getting a cannabis prescription.”

“I felt grateful and I thought America was amazing,” says a 75-year-old Japanese pensioner after he and his wife erroneously received $1,400 stimulus checks in April.

Our grateful pensioner wasn’t alone. He found two of his friends also received stimulus checks — courtesy of the U.S. government — which they were able to cash at Japanese banks. Our pensioner and his wife? They weren’t as fortunate. Their bank asked for confirmation they were eligible to receive the checks in the first place.

So why did the federal government inadvertently send stimmy checks overseas?

“The payments appeared to have been sent to Japanese retirees who had worked in the U.S., highlighting the enormous scale of Biden’s $1.9 trillion stimulus and the risk of waste in the rush to get money out of the door,” The Financial Times says.

We can’t argue with that logic…

In the case of our America-enthralled Japanese retiree, he worked in the U.S. In the 1970s. And he accepts his uncashed stimulus check with equanimity: “It ended as a brief dream.”

Heh… the same could be said of fiscal conservatism.

“I am so tired of hearing about Bitcoin and energy usage (i.e., use of fossil fuels for Bitcoin mining and transactions),” a reader writes.

“Anyone who claims it uses too much energy should be lambasting the good ol’ U.S. government. Come on, how much energy do you think the U.S. government uses on computer processing on a daily basis in all of its agencies? I’m guessing the Utah Data Center alone beats out Bitcoin.

“Who knows? Maybe some good will come of their carping and they’ll start calling to shrink the government?”

While we don’t have stats on how the government’s energy consumption compares with Bitcoin’s, this graphic came across our desk earlier this week…

Three different stores of wealth and the energy each consumes on a yearly basis.

We’ll be back tomorrow. Take care…

P.S. Nine in 10 Americans have no idea the hottest trend in tech is happening in plain sight…

In his “To $1 Trillion and Beyond” event, James shows why this revolution is the No. 1 place you want to look for tech’s new $1 trillion winners…

So… Did James Altucher just pick tech’s next $1 trillion winner?