The Biden administration is dead-set on feathering the nests of the power elite… while dealing another crippling blow to small business.

Oh, and there’s the potential to shred everyone’s privacy in the process.

There, in two sentences, is the essence of something you might have read about in recent days — the White House’s plans to beef up IRS enforcement.

Yesterday, the Treasury Department released details of the proposal — which includes swelling the IRS’ budget by 40% and more than doubling its workforce, to about 161,000.

The stated aim is to raise another $700 billion for Uncle Sugar over the next decade, and $1.6 trillion in the following decade.

OK, so hold on right there: We’re talking about $2.3 trillion over the next 20 years. That averages out to a paltry $115 billion a year.

For perspective, total federal spending in fiscal year 2021 is likely to reach $5.8 trillion. So $115 billion is — well, not pocket change, but also not an amount that will put Washington, D.C., back on the path of fiscal sobriety.

Which means the real agenda is not to raise revenue but to punish targeted groups of Americans. And contrary to the Democrats’ rhetoric, “the rich” isn’t one of them.

As you might have seen elsewhere, the bulk of the revenue that would be raised under this proposal would come from new IRS powers to snoop into everyone’s bank account.

Effective 2023, banks — as well as payment providers like PayPal and Venmo — would have to report annual account inflows and outflows.

The idea is to track down unreported business income — basically, anything that doesn’t show up on a W-2 or 1099 form.

But that’s not going to nail “wealthy tax dodgers.” They have plenty of other ways to steer clear of the tax man apart from undeclared income.

“The bank-reporting rules are designed to get a different group of people altogether,” says this morning’s Wall Street Journal — “business owners who inflate their deductions and don’t report all their income.”

“This is a political call by the Biden administration: Let’s not tell those guys, small-business guys, what we’re doing,” Steve Rosenthal tells the Journal.

Rosenthal is not some conspiratorial kook with a YouTube channel and a few hundred followers. He’s a senior fellow at the Tax Policy Center — a joint project of the Brookings Institution and the Urban Institute. It’s about as center-left Establishment as you get. If he’s saying that sticking it to small business is the agenda, you can take it to the bank.

Oh, about the banks and all that information they’re going to have to share with the IRS…

Rosenthal says the volume of data coming into the IRS would be overwhelming. Zeroing in on business owners underreporting income is tantamount to finding the proverbial needle in a haystack.

Reminds us of the Patriot Act after 9/11, and all the electronic data the feds started scooping up. Didn’t do squat to prevent more terrorist attacks, but it did give federal law enforcement a new set of “tools” to snoop on everyday Americans.

Here’s a recent example: Per a federal judge’s findings last year… in August 2019, an FBI analyst queried a massive federal database, using identifying information of about 16,000 people — even though only seven had any connection to an open investigation.

We don’t know what the analyst did with the search results, but one way or another, that’s a hell of a “fishing expedition.”

And what’s to say the IRS won’t hand off its new data trove to some other three-letter agency, the better to harass people who express opinions that offend the powers that be?

The good news is that it’s going to take Congress to sign off on many of these changes — not least the budget increase for the IRS.

Unless these changes can get folded into a bigger piece of legislation that would come under the Senate’s “reconciliation” rules, they won’t happen without 10 Republican votes.

Meanwhile, when it comes to the cryptocurrency part of the IRS proposal… we’re going to take a glass-half-full perspective.

Crypto transfers of $10,000 or more would be reported to the IRS. That’s in line with the current rules about cash transactions. (Watch out for making transfers of just under $10,000; the feds might nail you for “structuring.”)

We’ll take this as just one more sign the Establishment can’t make heads or tails of the crypto phenomenon. Here’s another: Only a month ago, the Federal Reserve said it would get around to creating a central bank digital currency in five years or so. Yesterday, Fed chair Jerome Powell said the Fed would issue a report on “stablecoins” sometime this summer. Why the sudden rush, Jay?

For all the screaming headlines on Drudge yesterday, the release of the IRS proposal had de minimis impact on crypto prices — unlike the announced Chinese crackdown earlier this week.

The big economic number is the “flash PMI” for May. As a reminder, any reading over 50 with these numbers indicates growth. And these particular numbers tell us the “reopening” is well underway: Manufacturing clocks in at 61.5, better than expected. And services? Oh, my, 70.1, smashing expectations.

All good, right? No. Here’s Econoday’s deadpan take: “The report notes possible stockpiling underway and significant supplier delays in the samples, and not surprisingly mounting price pressures including the strongest rate of pass-through to customers yet recorded in 11 years of records. [Emphasis ours.]

“New orders are coming in at a record pace for both manufacturers and service providers, yet employment slowed as the samples report trouble finding candidates in what is the latest indication of bumps underway in the labor market.”

And yes, there’s now something more than anecdotal evidence that extended unemployment benefits are making it hard for companies to find good help. 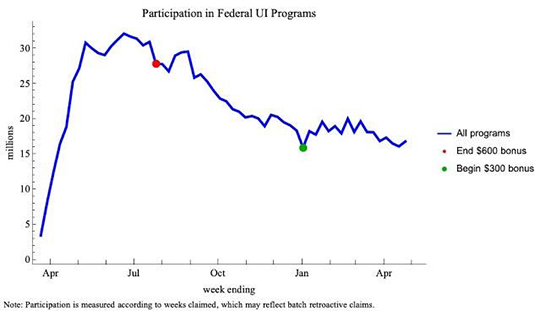 All told, the number of Americans on unemployment is still more than three times higher than it was before the lockdowns hit.

Business owners are doing what they can to cope. In one town a couple hours from your editor’s Upper Midwest home, there’s a “restaurant row” where everyone takes turns closing up shop one day a week, just to give their frazzled staff a guaranteed break.

Because we’re bipartisan haters around here, there’s some unfinished business from the previous administration to address before the week is done.

According to research from Moody’s, the brunt of the 20% Trump China tariffs have fallen on — American companies.

On average, U.S. importers are paying an extra 18.5% for Chinese goods subject to the tariff. Meanwhile, Chinese exporters are receiving only 1.5% less.

The longer it goes on, Moody’s warns that “pressure on U.S. retailers will likely rise, leading to a greater pass-through to consumer prices.” As if the consumer isn’t bearing a heavy enough burden already, right?

The Biden administration, recognizing the folly of Trump’s 17th-century approach to trade and determined to “own the MAGAs,” is moving quickly to reverse the tariffs.

Just kidding. Team Biden is in no rush to change course. “Those tariffs have been effective,” said Commerce Secretary Gina Raimondo in March. Yeah, but for whom?

“WTF! What does that graph even mean, where did it come from?” a reader writes after yesterday’s edition — in which we nicked a graph from an outfit called Galaxy Digital, showing Bitcoin’s electric consumption to be much less than that of gold or the banking system.

“How does gold use that much energy? Printing that graph was just sensationalism since it lacks any credibility and definition.”

The 5: Hey, it takes a lot of energy to extract grams of gold from the ground — mining, milling, concentrating, smelting, refining. Just the process of getting electricity out to a mine site can be staggering. The researchers threw in gold recycling, too — likewise energy-intensive.

Understand, we’re not casting a value judgment on Bitcoin vs. gold. We’re just gently poking at the trendy narrative about “Bitcoin’s bad for the planet, bruh!”

“I’m willing to bet James Altucher,” writes a reader from Idaho, “that none of Big Data’s marketers can tell you how many strawberries I eat in a month (or carrots, potatoes, beef, apples or onions) because I grow my own or buy for cash at the local farmers market, and I pay in greenbacks for local grass-fed beef.

“I probably don’t save any money in the long run but I’ll match you in quality, product for product, any day of the week.

“And I’ll also wager that I’ll still be eating well when the big cities’ ‘just in time’ distribution systems break down and their denizens are trading recipes for rodent stew and fricassee of Norwegian rat.”

The 5: Judging by the “significant supplier delays” showing up in the aforementioned flash PMI survey… that day might be just over the horizon ‘bout now.