Shock statistic: Investors now account for about one out of every five home sales nationwide. That’s according to John Burns, founder of California-based John Burns Real Estate Consulting.

Private-equity firms… pension funds… heck, for all we know, university endowments… they’re all in on the act.

If you’re one of our really long-term readers, this development is no surprise.

Indeed, it’s the next phase in the decade-long “steal of the century.”

That was the name 5 founder Addison Wiggin and I gave to a scheme the feds rolled out with little fanfare in early 2012. The formal name was “REO-to-rental.”

At that time, millions of foreclosed single-family homes were sitting on the federal government’s books in the wake of the 2008 housing bust. Under this scheme, hedge-fund and private-equity types could buy these homes at a deep discount and manage them as rentals.

These homes were available only to investors who could drop $1 billion or more on a bulk transaction.

If you as a mere peasant wanted to buy the bargain-priced foreclosure down the street to pull down a little investment income, you were out of luck. It was crony capitalism at its worst.

We also warned in 2012 that the investors in these rentals would eventually turn their holdings into REITs — real estate investment trusts whose shares you could buy on the stock market.

“Alas, by then,” said Addison, “the easy money will have been made.”

Indeed it was. By way of example, Starwood Waypoint Homes went public in early 2014 and sorely underperformed the S&P 500 for the 3½ years it was an independent company.

Then it was taken over by the biggest player in the space — Invitation Homes Inc. From its launch in early 2017, INVH has performed no better than an S&P 500 index fund.

That said, there are now opportunities for mom and pops to hitch a ride on the steal of the century.

For one thing, there are online platforms like BiggerPockets and Fundrise — allowing you to buy rental properties in attractive markets like, say, Boise and Knoxville. And there are firms you can hire to manage the properties while you collect the income hundreds or thousands of miles away — no 3 a.m. phone calls about a flooded bathroom.

But if the rise of investor-owned housing is going to permanently elevate U.S. home prices… it might finally be time for INVH to outperform the broad market.

“I love INVH as an income play,” says our income-investing specialist Zach Scheidt — specifically because of the company’s REIT structure.

“This means the company doesn’t have to pay corporate taxes. The company is also required to pass its operating earnings to us as investors through regular dividend payments.”

And as an investor in INVH, you truly own a portion of these homes. So the value of your investment continues to rise as home prices surge.

“This is a lot like owning shares of a gold mine. Yes, the mining company earns a profit when it produces gold and sells it in the market. But investors know that when the price of gold rises, all of the underground gold becomes more valuable. And this makes the mining stock worth more even if profits don’t immediately move higher.”

Zach’s bottom line: “Home prices are moving higher because of supply-and-demand dynamics. At the same time, a return of inflation will also help to cause home prices to appreciate.

“So by owning shares of INVH, you’ll not only profit from the rising housing market, but you’ll also be taking a big step toward protecting your wealth from inflation.”

To the markets today… and while not a “shock” statistic, this one’s an eye-opener: Small-cap value stocks have been outperforming large-cap growth names by a margin of more than 5:1.

The Financial Times tells us the gap hasn’t been this big since World War II was still raging in 1943. It’s also a startling reversal from last summer, when large-cap growth was smoking the small fry. Note well: Amazon topped out around Labor Day over $3,500 a share. As we write this morning it’s mired at $3,225.

But these sorts of “rotations” don’t last forever… and when money returns to large-cap growth, that will clear the way to all-time highs.

Our floor-trading veteran Alan Knuckman directs your attention again to the NDX — 100 of the biggest non-financial companies on the Nasdaq. Not only did it bounce smartly off the 13,000 level last month, it’s holding well above 13,500 — the midpoint between its most recent high and low. 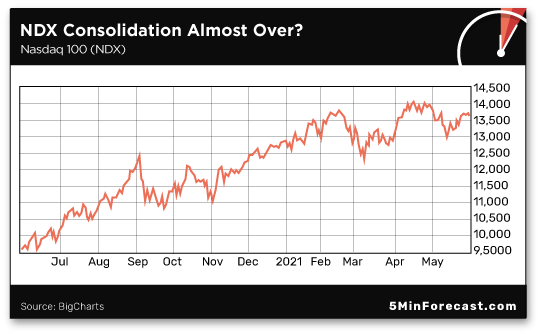 Now consider this: The NDX has staged this recovery even though Apple makes up fully 10% of the index… and AAPL shares are still more than 12% off their record highs set in late January. In other words, the NDX has been rallying even with AAPL as a lead weight on its leg.

That’s why Alan says once money starts flowing back into AAPL, it’s an all-clear signal for the major U.S. indexes to reclaim their all-time highs.

The big economic number of the day is the May ISM Manufacturing Index — up a skootch to 61.2. But that very healthy headline number is skewed by less-healthy internals — input costs, slowing deliveries, scarce labor. The employment number clocks in at 50.9; anything below 50 would indicate manufacturing jobs are actually declining.

“It’s not that jobs aren’t available, it’s just that employers, perhaps especially in the manufacturing sector, can’t seem to fill them fast enough,” reads the summary from Econoday.

“For policymakers these results may make for uncomfortable reading, suggesting that there’s too much stimulus washing around.” Gee, ya think?

“Small biotech stocks seem to be stabilizing after a rough stretch earlier this year,” says our tech-and-biotech specialist Ray Blanco.

“Part of the selling in the sector is the market just taking a breather after biotech setting new all-time highs.”

After all, few development-stage biotechs generate revenue. “They consume cash in the lengthy and risk-fraught effort to get a new biopharmaceutical product to market,” Ray reminds us. “So another aspect of this year’s sell-off was a propensity for investors to shy away from non-profitable stocks in general and cycling into other areas.

“Over the past decade, when we’ve seen bears growl at small biotechs, causing declines of 20% or more as measured by the small cap-heavy S&P Biotechnology Select Industry Index, it’s usually been a good time to start to buy.

“And with the index having declined 30% peak to trough this year, it’s an especially great time to buy right now. Here’s a chart of the ETF that tracks the index (XBI). Arrows indicate drops of 25% or more. 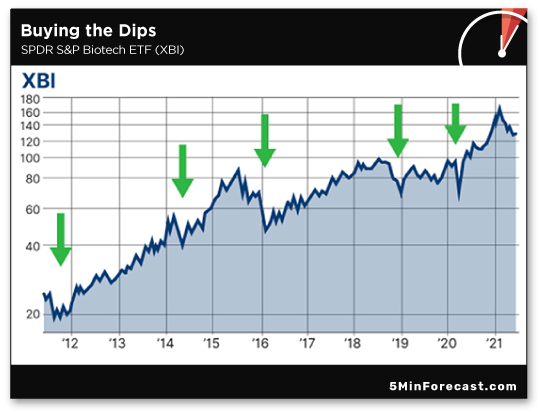 “Moreover, we’re seeing biotech prices level off after hitting a bottom a couple of weeks ago. To me this suggests the worst is over and we should see a much more supportive environment for stocks we trade here going into the back half of the year.” Ray will stay on top of the most potentially lucrative names in his FDA Profit Alert.

Upon the death of a loved one, it’s not uncommon to later offer a toast to the dearly departed, but — right there at the funeral home? 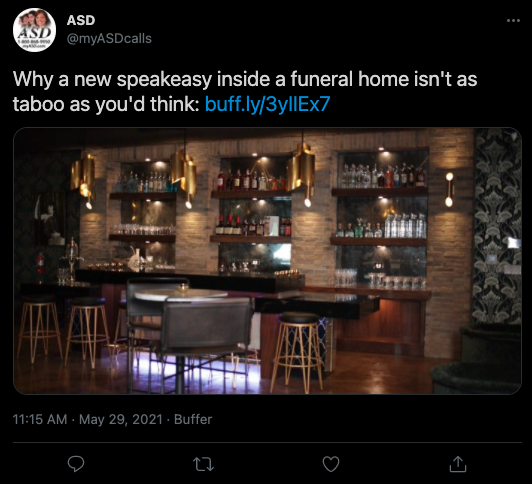 The Blount & Curry Funeral Home in Tampa has gone through a makeover to reflect what management describes as changing tastes in the pandemic era — less mournful, more celebratory.

“It has shifted a little bit,” director Adam Wojciechowski tells WFTS-TV. “I see a lot more people want to celebrate their loved one’s life, whether having refreshments or food service or bar service at their loved one’s wake, and that’s becoming more common.”

The TV station informs us that “the Palma Ceia room has environmental projections. The team can project Raymond James Stadium on the walls or the Gasparilla Pirate Invasion.”

[Up until very recently, we can only imagine a projection of the Buccaneers’ stadium would have induced even deeper states of depression. But we digress…]

“There’s nothing dark or grim about this space,” says Wojciechowski. “It’s a place to feel a little bit of lightheartedness.”

“A little bit of lightheartedness?”

Heh. Brings to mind the episode of WKRP in Cincinnati where the station lands a lucrative new ad account — with a funeral home whose director wants a jingle that’s “light and bouncy.” Enjoy… 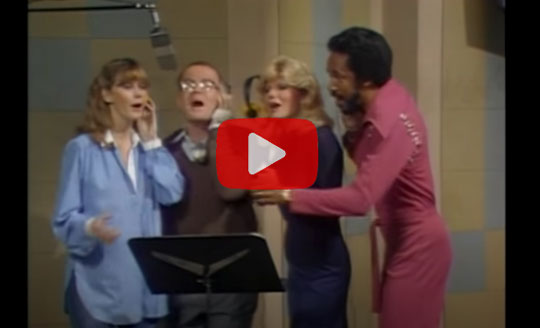 Anyway, management is so proud of the space that it’s available for “birthday parties, work functions, cigar groups, if people just want to have something fun for their friends,” says Wojciechowski.

Guess they’re careful to leave the hearses parked out back…

To the mailbag, and a reader’s outrage about data mining after our Saturday edition…

“This bit about the U.K.’s health (?) services (?) — just days after the EU courts found for Snowden about exposing the illegal data collection by GCHQ and dismissed criminal charges.

“Remember they kill hundreds/thousands every year with delays/bad treatments/denials for even basic care.

“I have an idea — let’s publicly open all records (personal/health/financial) of all bureaucrats/.gov employees for full review of the public and allow private prosecution for all malfeasance without statutes of limitations and retroactive laws. Bring on the revolution!”

The 5: What? Accountability for public officials? That’s mighty radical stuff you’re pushing there…