“When I say the words ‘electric vehicle’ what brand immediately comes to mind?” asks our retirement specialist Zach Scheidt… with a rhetorical flourish.

“Most people immediately think of Tesla and the high-quality electric cars that the company makes,” he says. “Tesla’s attention to detail, advanced technology and luxury appeal have helped the company corner the market for electric vehicles.”

“Of course, Tesla’s leadership hasn’t gone unnoticed by investors,” Zach attests. “And the company’s stock has skyrocketed in recent years.

“Even after more than a 30% decline this year, shares of Tesla currently trade above $600.” Put another way: “That’s more than a 1,600% gain from where the stock was trading two years ago.”

“More importantly, will investors shift their focus back to more traditional car manufacturers who are quickly improving the quality of their electric vehicles?”

To wit, Zach poses a hypothetical scenario: “Imagine walking into a car dealership and seeing two cars with similar features. One is priced at $8,300 and the other at $99,100.

“Would you walk over and check on the bells and whistles that might be hidden inside the premium-priced car?” he asks. “Or would you get excited about a great deal for the $8,300 model?

“There’s not necessarily a right or wrong answer to this question,” he continues. “The two showroom models” — a Tesla and a Ford — “represent two different auto stocks — one that’s valued at well over 10 times the going rate of the other.

“Let’s take a quick look at what investors are paying for shares of Tesla Inc. (TSLA) compared with what they’re paying to own shares of Ford Motor Co. (F).

“When the market closed yesterday, Tesla was trading around $619 per share,” says Zach. “This gives the company a total valuation near $596 billion.

“Wall Street analysts expect Tesla to earn profits of $6.25 per share next year,” he says, “so when you buy shares near $619, you’re essentially paying more than $99 for every dollar that TSLA expects to earn.”

Ford, on the other hand, closed yesterday above $14 per share. At this price, the entire company is valued at over $50 billion. In other words, Ford’s current market value is less than 10% of Tesla’s value.

“Next year, Ford is projected to earn $1.67 per share in profits,” Zach says. “So when you buy shares close to $14 — they’ve moved a bit higher in today’s trading — you’re paying just $8.30 for every dollar of profits Ford generates.

“With investors paying more than 10 times the price for every dollar Tesla is expected to earn, there’s certainly a compelling argument for owning shares of Ford today.”

Not to mention? “Shares of Ford have surged higher this week in response to the company’s plans to boost its line of electric vehicles,” says Zach.

“Last Wednesday, the company announced it will increase spending on its electric vehicle development to $30 billion — up $8 billion from previous plans,” he says. “More importantly, Ford has set a goal of generating 40% of annual revenue from electric vehicles by 2025.” 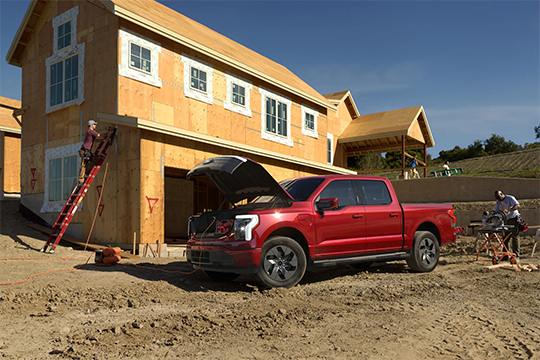 “Ford shares are up more than 60% from where the stock was trading at the beginning of the year,” Zach notes. “And given its valuation, I’m much more comfortable investing in shares of Ford.

“As a bonus, Ford has historically paid investors a quarterly dividend of $0.15 per share,” he says. “While that dividend was suspended when the coronavirus crisis hit, I expect Ford to reinstate its dividend later this year.

Zach surmises: “So far in 2021, investors have been favoring value stocks like Ford over high-priced growth stocks like TSLA.

“Buyers are simply getting more value for every dollar invested with tremendous potential for growth as well,” he says.

“As long as this trend continues, it will pay to take larger positions in solid companies that earn reliable profits (like Ford) and to be careful placing too much faith in growth names with sky-high multiples like Tesla.”

“After more than a week of indecision and tight closes, strong selling pressure is sinking stocks this morning,” says market analyst Greg Guenthner.

“Meme stocks are still doing their thing,” Greg notes. “AMC is issuing shares, which crushed the melt-up rally. It’s gone from $77 to about $58 so far this morning.

“If you’re trading these meme stocks,” he advises, “it’s best to think of them as hit-and-runs: take what you can and get the hell out of the way.”

And although we’ve dispensed with our “little chart of horrors,” the Labor Department reports initial jobless claims totaled 385,000 for the week ending May 29. That’s the first time initial unemployment filings fell below 400,000 since the whole COVID mess started…

According to the Tax Foundation: “Pension liabilities are a deep-seated problem that long predates the pandemic.

“The following map uses FY 2019 data to show the funded ratio of public pension plans by state, calculated by measuring the market value of state pension plan assets in proportion to each state’s accrued pension liabilities… 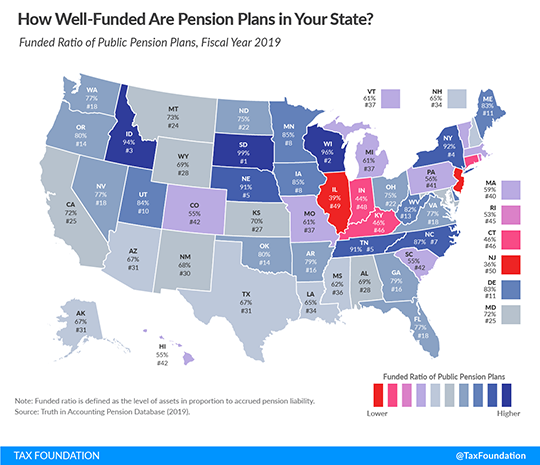 “Lower funded ratios indicate when a state’s pension plan is not adequately funded, while higher funded ratios are evident in states where pension assets are keeping relatively good pace with accrued liabilities.”

So a tip of the cap to Idaho, Wisconsin and South Dakota… almost 100% funded.

But the five states with the most on-the-bubble pensions… under 50% funded? New Jersey is the worst offender — just 36% funded! Followed (of course) by Illinois, Indiana (that one surprised us), Connecticut and Kentucky.

“Low funding levels are challenging not only because of the large contributions required to make up the debt, but also because they generate less in investment earnings,” the Tax Foundation explains.

“Trump and Biden don’t agree on much,” says our tech expert Ray Blanco. “But…

“… as the former president was leaving office, he revitalized America’s fight to get back its footing in this market — a fight that Biden quickly picked up.

“So what’s bringing together both sides of the aisle?” asks Ray. “Rare-earth elements (REEs)… tech manufacturing’s bread and butter.”

Currently? China has a stranglehold on these essential metals — an 80% market share, in fact. “America used to hold some sway over this space, but was flushed out by pricing maneuvers of the Chinese government.”

Not only that, but even though REEs aren’t as rare as the name implies, the mining and refining process is decidedly bad for the environment… which is not something China concerns itself with. So? Again, advantage China.

“But that’s flung the door wide open for innovation…

“Scientists are discovering ways to obtain rare-earth metals while actually cleaning up the mess of the dirtiest fossil fuel in the world: coal,” says Ray.

Researchers at Purdue University — Go, Boilermakers! — have been working for years on a way to turn the toxic byproduct of burning coal into “neodymium and praseodymium — two of the most sought-after REEs (used in motors, turbines and medical devices) — as well as dysprosium, which is a crucial rare-earth element for electric vehicles and defense,” Ray says.

“And the best part? An American rare earths manufacturer just acquired the exclusive rights to this invention.

“The company is called American Resources Corp. (AREC) and it’s a publicly traded stock priced only around $3.

“Keep in mind, this isn’t an official recommendation,” Ray says. “But when game-changing technologies come onto the scene… especially ones that could help bring the U.S. back into a booming market… you deserve to know.

“That said, AREC is looking to assert some dominance in this industry very soon, so I’d keep an eye on it.”

“World food prices rose in May at their fastest monthly rate in more than a decade,” says Reuters. The UN reports this morning 12 consecutive months of increases; in fact, food prices are at highs not seen since September 2011.

“The Food and Agriculture Organization’s food price index, which measures monthly changes for a basket of cereals, oilseeds, dairy products, meat and sugar, averaged 127.1 points last month versus a revised 121.3 in April.” 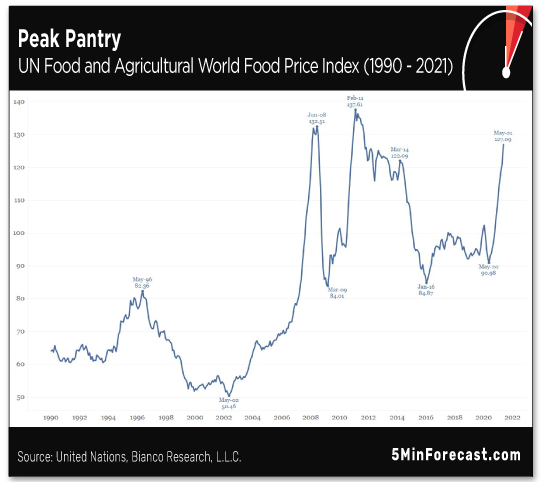 For some added context, it was skyrocketing food prices in 2011 that helped touch off the Arab Spring revolts…

“On the subject of the war on cash, I went to a large, national bank to withdraw $5,000 in cash,” a reader writes.

“After causing a bit of panic, I was reprimanded for not calling ahead to see if they had ‘that much cash on hand.’

“But after the shock and awe of such a daring request, the bank was able to pull together the desired sum in cash.

“Who would’ve thought? Trillions of dollars sloshing around, but a bank has to scramble to pull together 5,000 physical dollars? Looks like the war on cash is real.

Yep… We’ll keep up with the de-dollarization revolution — in all its iterations. And sheesh, one would think you were robbing the friggin’ bank…