I spent time last weekend with friends who own and operate a small electrical contracting business based in northern Maryland.

They were fortunate during the pandemic: The business was considered “essential” in Maryland… which wasn’t the case in neighboring Pennsylvania, where the company also operates.

Nevertheless, they managed to stay afloat in 2020 — despite weeks-long delays on electrical supplies. They even avoided laying off any of their five employees.

So they were taken aback when they received notice from the state of Maryland that their mandatory unemployment insurance contributions would increase in 2021 from 0.3% to 2.3%.

The justification? According to the Maryland Department of Labor’s website: “Since the beginning of the pandemic, over $1.5 billion in benefits have been awarded from the Unemployment Insurance Trust Fund… All employers will see an increase in their tax rate for the calendar year 2021.”

For my friends, that increase is 7.7 times what they paid in 2020… In dollars and cents? David Watts of DRD Pool Management, another Maryland business, told a local Fox affiliate: “Our unemployment insurance [contributions] will go from about $15,000 a year to close to $75,000 a year.”

Generally speaking, most small businesses don’t have an extra 60K lying around… especially coming off a pandemic.

“The COVID-19 pandemic hit small businesses harder than it did large ones, and while a recove has begun, it remains uneven and fragile,” the NFIB says.

“Many states have devastated unemployment insurance trust funds and intend to place the burden of recovery on small business by increasing taxes.

“UI tax increases are a major burden on small businesses – especially at a time when Main Street is still getting back on its feet from the worst days of the COVID-19 pandemic and government-mandated shutdowns,” the NFIB concludes.

“Unemployment compensation funds are inadequately funded in many states,” the Tax Foundation says.

“All 50 states and the District of Columbia levy UI taxes, but some states structure their systems better than others… 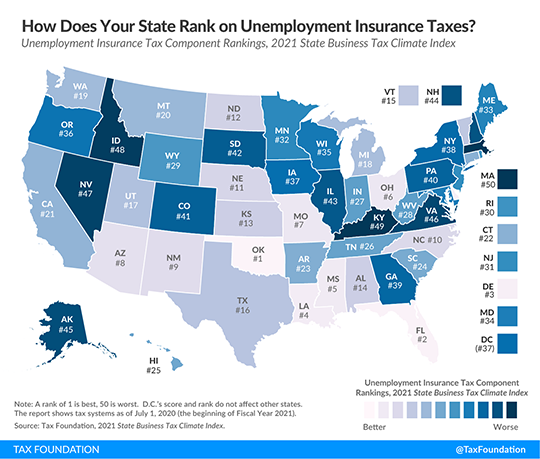 According to the Tax Foundation: “The states with the best-scoring UI tax systems are Oklahoma, Florida, Delaware, Louisiana, Mississippi and Ohio.”

On the other end of the spectrum, Massachusetts, Kentucky, Idaho, Nevada, Virginia and Alaska have the most ramshackle UI systems…

“To date, 31 states (and the District of Columbia) have scheduled to increase their state unemployment insurance taxes and/or taxable wage bases in 2021,” says a blog post at 501(c) Services

“Experts predict that many states will see multiple years of increases to pay for 2020 unemployment benefits payouts.”

Add to that, 22 states with empty UI coffers have applied for federal Title XII loans to cover their payouts to jobless residents. “By law, these loans must be repaid, and depleted trust funds must be returned to pre-pandemic levels,” 501(c) Services says.

So states have two alternatives — cut unemployment benefits or increase unemployment insurance contributions required of employers. Many states have employed both strategies after a budget-busting 2020… and accepted federal loans in the bargain.

But the way the NFIB sees it: “A new danger has emerged to threaten the fragile recovery of the small-business economy: increased unemployment insurance (UI) taxes.”

The big mover yesterday — Biogen Inc.— has floated down about 5% after its breakneck ascent on word of its Alzheimer drug’s FDA approval. “This could be a key moment for the biotech sector,” says analyst Greg Guenthner, “especially when you consider that BIIB stock has gone essentially nowhere since 2015!

“BIIB has been dead money for more than five years,” he says. “In fact, biotech as a sector has been a laggard ever since it flamed out during the stealth bear market of 2015–16.”

For the economic number of the day, the NFIB Small Business Optimism Index dropped 0.2 points in May to 99.6 — a hiccup in the month-to-month growth of optimism so far in 2021.

“A record-high 48% of owners reported unfilled job openings,” the NFIB reports. “If small-business owners could hire more workers to take care of customers, sales would be higher and getting closer to pre-COVID levels,” says NFIB Chief Economist Bill Dunkelberg.

“In addition, inflation on Main Street is rampant and small-business owners are uncertain about future business conditions,” Mr. Dunkelberg recounts.

And the kegger… rager… beer-pong party will officially be over on Oct. 1 when student loans — frozen during the pandemic — will have to be repaid, something that affects about 40 million federal student loan holders.

“Before the pandemic, it was clear that Americans were having trouble meeting their student-debt obligations,” Bloomberg says. “Loans in serious delinquency (more than 90 days late) exceeded $135 billion before the freeze — a higher rate than for most kinds of debt.

“Yet for all the talk of loan forgiveness during last year’s election campaign — including from President Joe Biden, who promised to write off at least $10,000 per borrower — there’s been no progress toward shrinking the pile,” says Bloomberg.

And just so we’re clear:

Can you say snafu?

“For every biotech stock zooming in on the potential for a new COVID-19 therapy or vaccine, there were others that had to slow down or delay clinical trials,” reports our science and tech expert Ray Blanco.

“Coronavirus-induced social changes made it harder to recruit patients,” he says, “[but] waiting longer to reach an important clinical catalyst often means a biotech stock gets repriced accordingly.

“Moreover, [because] most of our drugs are made overseas… COVID-19 exposed the fragility of supply chains reaching halfway around the world,” says Ray. “So I expect we’ll see increased reshoring for the pharmaceutical manufacturing industry. But that will take time.

“At the moment, we’re still enormously dependent on offshore sources for active ingredients and finished products,” Ray highlights. “That’s not the case just for cheap generics, but also newer patented and branded drugs.

“It’s also the case for many new drugs in development or drugs about to receive FDA approval.

“Normally, the regulator does a pretty good job of adhering to Prescription Drug User Fee Act (PDUFA) schedules,” he says.

“But that review process requires more than just sifting through the clinical evidence of a new drug’s efficacy and safety,” says Ray. “It also requires boots on the ground to make sure the new drug’s manufacturing facility is up and ready to produce pharmaceutical-quality products.

“That became impossible to do with overseas facilities in a time of lockdowns, quarantines and travel restrictions,” Ray says.

The outcome? The COVID-19 pandemic has served up all manner of disruptions that have also impacted the U.S. pharmaceutical industry. “This FDA has slipped on many approval timelines,” Ray says. So expect delays: “usually by many months.”

“Oklahoma, Alabama and Montana are the latest states to deregulate home food production,” says an article at Reason. Indeed, if you’ve become a consummate sourdough bread baker or pastry chef during pandemic lockdowns, in these three states at least you can legally sell your goods… with a few caveats.

Oklahoma’s Homemade Food Freedom Act “allows people to sell any homemade food products that are free from meat or seafood without a government license, permit or inspection.” Plus, the law allows home cooks and bakers to make up to $75,000 in gross annual sales while still retaining the label of “home food establishments.” Previous regulations capped earnings at $20,000.

“A similar bill was passed in Alabama on May 6,” Reason says. And like in Oklahoma, the $20,000 cap was jettisoned.

Reason says: “The National Environmental Health Association has identified 41 bills related to the cottage-food industry proposed in 24 states so far during the 2021–22 legislative session.

“This barrage of bills cutting food regulation appears to be one upside to the havoc that the pandemic has wreaked on the traditional food and restaurant industry,” the article concludes.

From time to time, The 5’s highlighted stories of mostly women home cooks — and entrepreneurs — who’ve been fined or threatened with actual jail time for selling food out of their kitchens.

Consider the 2016 case of a single mother in California who faced up to a year in prison for selling a plate of homemade ceviche to a supposed fellow-member of her culinary Facebook group. Instead, it was a law enforcement setup, on par with a narcotics sting operation.

Hmm… One can only guess at the operation’s code name. Operation Vittles? Nope, already taken. Same goes for Operation Mincemeat.

At any rate, the home cook didn’t go to jail… And now California’s jumping on the food freedom bandwagon too.